Escape to the last frontier 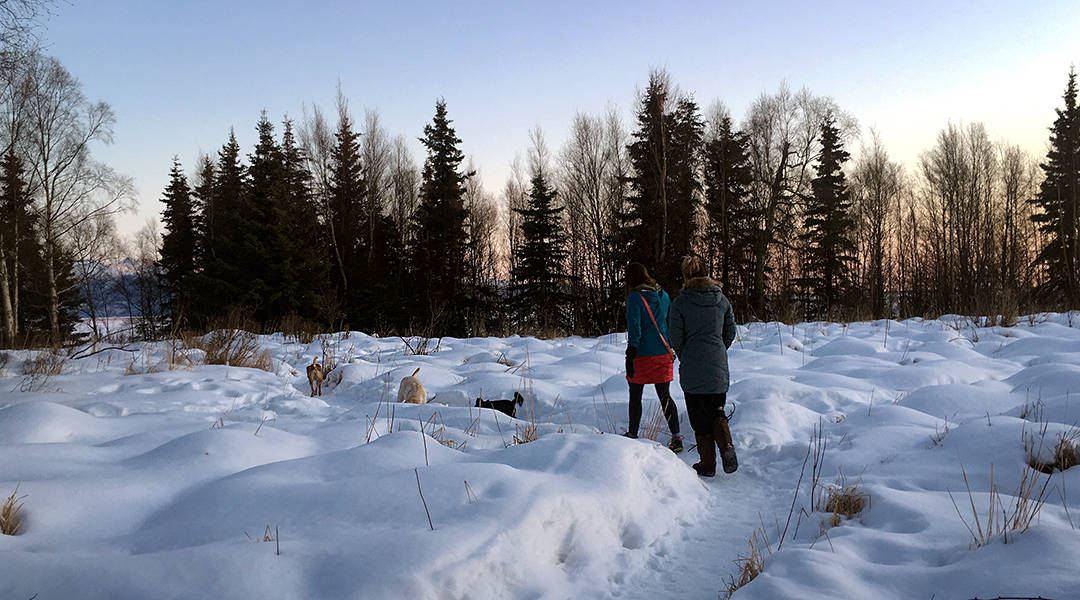 Kim Kole, left, and Mackenzie Garner walk our three dogs during Alaska’s “hunker down” mandate. I trail far behind to maintain my quarantine.

ANCHORAGE, A.K. — I had 14 hours to pack up my life in South Carolina.

On March 18, my family began urging me to move back to Alaska. Cases of COVID-19 were showing up in Alaska left and right, so Alaska Gov. Mike Dunleavy was considering halting incoming travel. At the time, I was scheduled to resume in-person classes on April 6.

That night, I booked a flight for March 26. An hour later, my mom convinced me to leave on March 23. The next day, UofSC announced the rest of the semester would be held online.

By noon on March 20, California and New York had shut down. Worried that Washington state would be next, I moved my flight to March 21. This gave me less than a day to pack my belongings and say goodbye to anyone who wasn’t quarantined or in social isolation.

I arrived at the Columbia airport at 4:05 a.m. No one was at the American Airlines counter; no one was really anywhere.

Three other passengers arrived by the time I was going through security. When boarding the first plane, the flight attendant instructed everyone to sit in first class. He said this was the fullest plane they’d had in a while. There were five of us.

At 6 a.m., the Charlotte airport, my next stop, seemed abandoned. The sound of my suitcase wheeling behind me was deafening as I walked to my departure gate. There were about a dozen people on my flight to Seattle.

Three passengers in their mid-50s sat in the rows in front of me. They mocked the growing national alarm and joked that they should sue the media for inciting panic over what they believed to be a glorified flu. They said they had no plans to quarantine once they reached Alaska. I remained silent.

At nearly 10 a.m., the Seattle airport wasn’t the overcrowded hub it usually is, but it was comforting to see groups of people. Many were wearing masks, and everyone was standing, sitting or waiting as far apart from each other as possible.

Overall, there was no sense of urgency normally seen in an airport, no one running to catch a delayed flight, no large groups struggling to find a restaurant deserted enough to accommodate their entire party, no long lines at Starbucks — no long lines anywhere really.

My flight to Alaska was the only thing about the airport that seemed normal; it was overbooked. Everyone was rushing back into the state before they were locked out.

Since returning, I’ve been in self-quarantine. My family tells me that Anchorage is deserted, although Costco, of course, still has lines wrapped around the building. All nonessential businesses have been shut down, and most people have retreated into their homes.

My quarantine has been well spent cuddling dogs and keeping up with friends over FaceTime, but all of the good times are haunted by the knowledge that none of us are going back to school, all future plans are in suspense and many of our loved ones are at serious risk.

My already desolate home feels more and more isolated, and I’m terrified at the idea of being quarantined for another year. Every day someone new contacts me about one of our friends, or friends of friends, who’ve contracted the virus. Doing schoolwork feels ridiculous at a time when everything else is so important, but what else can we do?

I used to love reading dystopian novels. I just never imagined I’d be graduating into one.