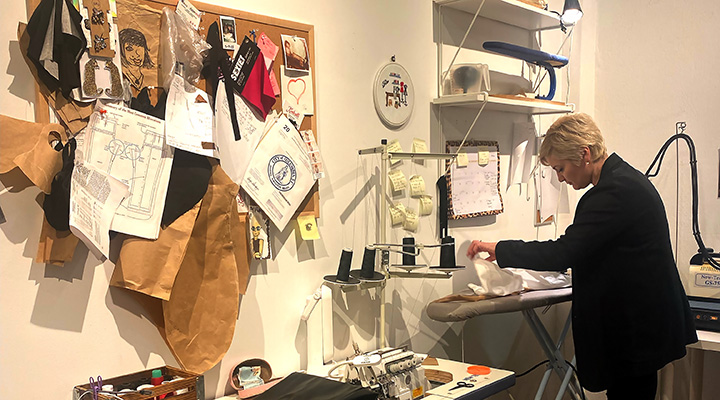 Anton and Maxine owner and designer Diko Pekdemir-Lewis steams a piece from her collection. (Photo by Grace Tippett)

SheRon Knight works as a law enforcement officer in Lexington County. When he’s not on the clock, he spends his time at auditions and photoshoots to further his career as a fashion model.

“I would say it’s very hectic to try to juggle between the two,” Knight said.

Knight works about 60 hours a week as a field training officer and S.W.A.T. operator.

“Modeling gets the rest of my time on my off days, if possible,” Knight said.

Knight is one of the few but growing number of people in the Midlands looking for a sustainable career in the fashion industry. From the city’s first fashion show in 2011 to a recently formed fashion alliance aimed at boosting the area’s profile, Columbia’s fashionistas try to navigate a competitive industry that has historically been focused on major international cities such as New York, Paris, and London.

Darain Ginyard is the chief marketing officer for Columbia Fashion Week, the organization that spearheads Columbia’s fashion industry.  He said the city’s location makes it ripe for the industry to grow here.

“We have this ideology that we’re in the center of these big populaces,” Ginyard, said. “So, if you think about Greenville, Charlotte, Charleston, Atlanta, we’re in the middle. So we’re really focused on bringing fashion to this midpoint.”

For some people, Columbia is increasingly busy.

For Knight, when casting calls or modeling opportunities come up, he is forced to choose between his profession and his passion.

Knight said his modeling work helps him decompress after a long week.

“I’m making it work,” Knight said. “It is hard. It is exhausting sometimes. But I make it work, and I know it will all pay off at the end of the day.”

Knight started modeling in 2015 when he was in the military. During his almost decade-long modeling career, Knight has expanded his network across South Carolina.

He recently was hired for his first billboard ad, in Atlanta, with the clothing brand Born Legend.

“It was a humbling moment,” Knight said. “It took a lot of time and patience to get there.”

Previously, he landed a role in a music video for the artist Ruff Endz. The song, “Party Over Here,” is featured on the album “Rebirth.”

Columbia Fashion Week has been around for 11 years, working to provide a local space for fashion and culture. Leaders of the group call themselves the “official fashion week of the capital city” and the “fashion hub of South Carolina.”

Social media begs to differ. Greenville and Charleston also have a fashion industry, and both are more than twice as large as Columbia’s, based on social media following.

The metro area of each of the three cities is roughly the same — around 800,000.

Charleston Fashion Week began in 2007.  Greenville’s began in 2017 — and already has twice the Instagram following of Columbia’s — while Columbia organized its industry in 2011.

“More businesses and more people are coming to Columbia,” Ginyard said. “And with it, we believe fashion and culture will definitely follow.”

To that end, Juliette Muller, the executive director of Columbia Fashion Week, created a new fashion alliance as a branch of the larger organization.

Columbia Fashion Week employs roughly 25 people. It hosts two major events — the Met Gala in December and fashion week in May — and multiple smaller events throughout the year. Ginyard said in all, about 1,500 guests attend the events.

During Fashion Week in May, upwards of 30 brands — a combination of local designers and local boutiques with national brands — are highlighted.

Clothing designer and artist Diko Pekdemir-Lewis moved from Germany to Columbia in 2016 when her husband was transferred to Sumter Air Force Base. She learned art design from her father, a custom tailor.

“When I was a kid, he had his studio at home, and when he was making clothes for his customers, I would sit down and make clothes for my Barbies,” Pekdemir-Lewis said.

She started her own brand in 2014, naming it Anton and Maxine, her children’s names.

She said the transition from Germany to South Carolina was made easier by the military community, which has a larger portion of Europeans than the population in general.

“I think Americans are more open than Germans for new things,” Pekdemir-Lewis said. “That’s why the transition was so easy. I was like, ‘OK, I guess I belong here.’”

Many of her local customers recognize her roots in her designs.

“They can see and they can tell this is very European,” Pekdemir-Lewis said. “And then, of course, when they meet me, when I talk, they automatically know where I’m from.”

She started by selling her designs at local craft markets in Columbia, such as Soda City and First Thursday on Main.

Her most recent collection is called “Pink Licorice.”

The idea for the collection started when a customer asked for a pink version of an Anton and Maxine piece they already owned.  Pekdemir-Lewis recognized that bright pink was popular this season because of prominent designer Valentino’s latest collection, which is heavy on fuchsia pink.

The “Valentino Pink PP Collection” was conceived by Valentino’s creative director, Pierpaolo Piccioli. The brand says the collection was created by “stripping the pallet down to a single hue” and doing more with less.

Pekdemir-Lewis took the idea and formatted it for her target consumer — working women 35 and older.

However, for the upcoming December Met Gala, she plans on unveiling a new line.

“Because it’s right before the holidays, it will be more of a fancier collection and smaller,” Pekdemir-Lewis said.

One of Columbia Fashion Week’s most coveted programs is the Top Model Competition.

Katie Lazor is a University of South Carolina student and a Columbia native. She started modeling during the pandemic.

Lazor was a contestant in this year’s Top Model Competition. She models for Pekdemir-Lewis’ collection.

Lazor has dreams of walking the runway in New York City, London and Paris. She appreciates the experience she is getting locally.

“I think starting smaller in an area that doesn’t have that much of a scene but does have people that are in the industry, is nice,” Lazor said. “You get a good feel of what’s right and what’s wrong really fast. And you also just get the grounds to work on to build up to those next steps.”

The competition is split into a male and female categories. Eleven male models entered the competition, while 12 females entered.

The models participate in various challenges during the month of September, earning competition points and building their portfolios.

The winner in each category earns a trip to visit New York Fashion Week.

Knight, the Lexington County law enforcement officer, won this year’s male competition, which also includes a cover spread for local fashion magazine Metro Vieve. He is the first male to make the cover.

“It’s been a lot of growth,” Knight said. “A lot of understanding of the business, of the industry and how I can advance myself and also help others along the way.” 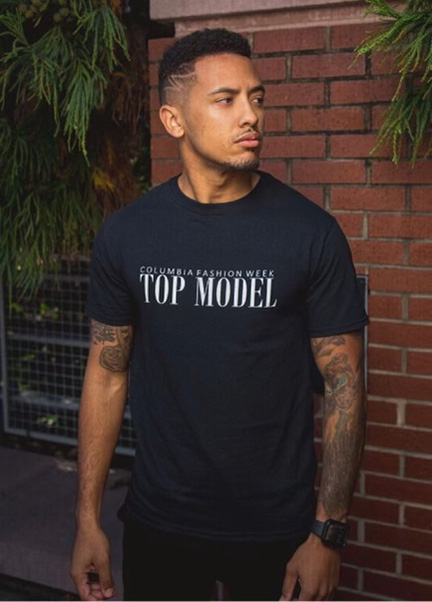 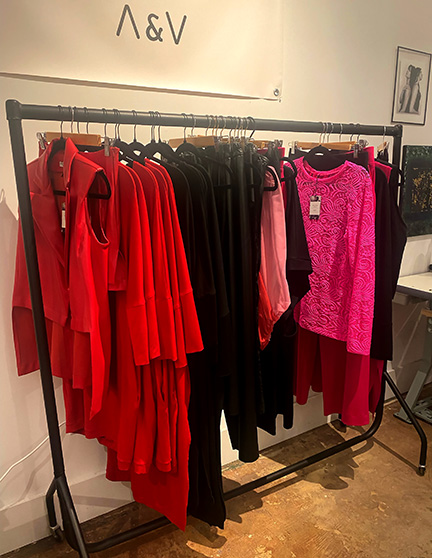 Anton and Maxine’s most recent collection is called “Pink Licorice.” The collection features Diko Pekdemir-Lewis’s signature designs in brighter colors, such as pink and red. (Photo by Grace Tippett) 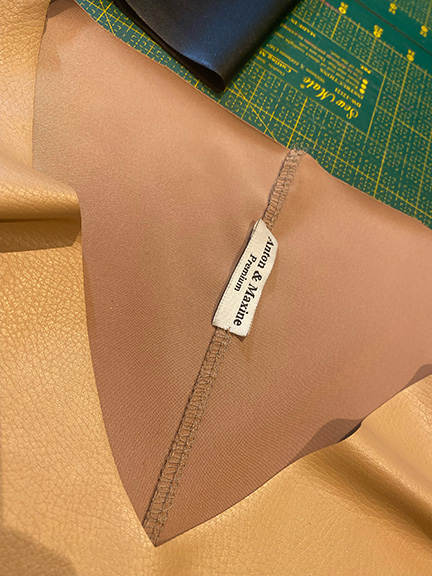 Anton and Maxine’s storefront and workspace is located inside Tapp’s Outpost on Saluda Avenue in Five Points. (Photo by Grace Tippett) 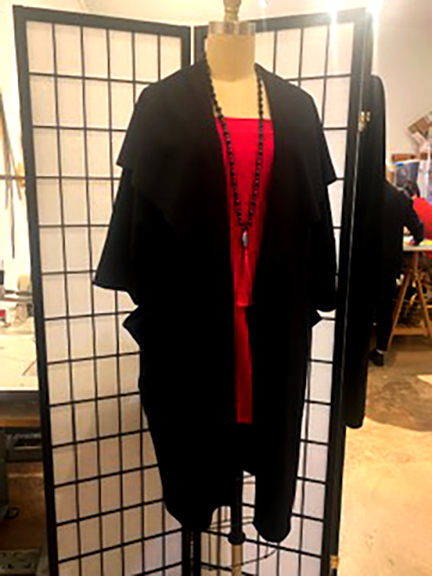 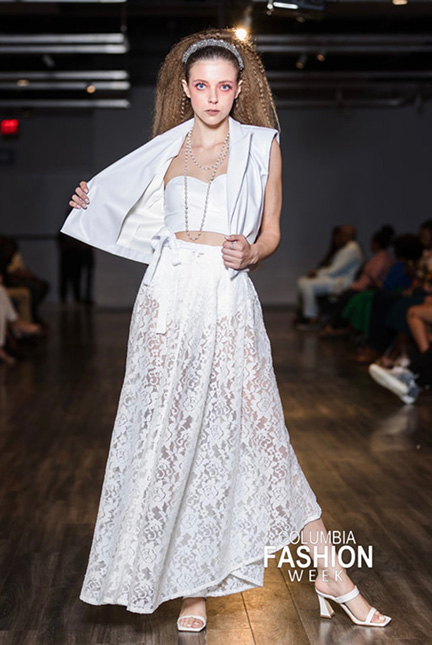 Model Katie Lazor walks down the runway during Columbia Fashion Week 2022. She is wearing a design by Anton and Maxine. (Photo courtesy of Katie Lazor/@slickangles on Instagram)