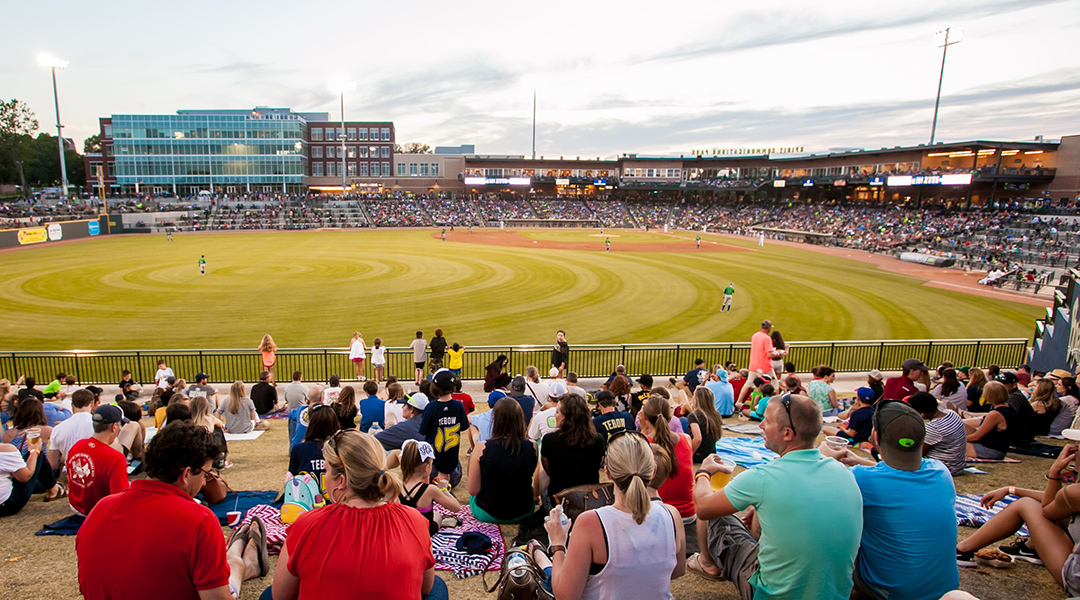 Fans spectate as the Columbia Fireflies take the field at their home ballpark, Segra Park. The Fireflies plan to be back in 2021 but with different players and hopefully a new affiliation. Photo credit: Jeff Blake/BullStreet District

For the Columbia Fireflies, learning their team would no longer be a part of the New York Mets’ minor league affiliates via Twitter wasn’t exactly fun. Through the team’s Twitter, you might think it is.

On Tuesday, Mets MLB.com beat writer Anthony DiComo tweeted that the Mets would be moving on from hosting one of its affiliates in Columbia as apart of an MLB-wide effort to move affiliates closer to their major league homes.

While the organization had an idea this was coming, Fireflies President John Katz and his team didn’t quite expect to hear the bad news on social media.

“Yeah, just a little bit disappointed. Only in that we’ve been affiliated with the Mets since 2007 between Savannah and Columbia. But again, you also have to take it in the context that the new president of the Mets has been on the job for four or five days. And this was his first press conference with the new owner of the Mets,” Katz said.

“You know, I think that he’s probably got bigger things to worry about. We certainly don’t hold any grudges, but this was one of those things that we wish it would have been handled a little bit differently, but it is what it is.”

About an hour after DiComo broke the news, the Fireflies’ Twitter account, @ColaFireflies, tweeted, “Did…..did we just get dumped via Twitter?!” The organization also made an addition to their Twitter bio saying, “Newly single and ready to mingle TBD level affiliate of TBD team in TBD league.”

The decision to take a light-hearted route on Twitter was effective. The Fireflies garnered over 6,000 likes on their tweet, while positive comments in support from fans of the local ball club flooded in.

Ashlie DeCarlo, director of marketing for the Fireflies, runs the team’s Twitter and explained her thought process behind keeping it fun.

“So it kind of came down to a what else do you do? How else do you react to that? And that’s kind of how I thought. It was just kind of a ‘well this happening, let’s just go with it’ kind of thing.”

“And just kind of have fun with it. Try to keep it lighthearted,” she added. “We didn’t want to scare our fans or kind of depress anybody…  and also reassuring people, hey, we’ll be back.”

Katz agreed with DeCarlo, saying it’s important to reassure fans that not much will change for the Fireflies.

“We’re helping keep the mood light because there’s really nothing beyond a change in affiliation,” Katz said. “The only difference will be the players from a different major league team will get into the same uniforms our players have gotten into for the last four years.”

Members of other South Carolina Minor League Baseball teams took note of the tone that Katz and DeCarlo set on Twitter.

Hunter Horenstein, director of fan engagement for the Myrtle Beach Pelicans (a Chicago Cubs Affiliate), tweeted, “Take a look at @ColaFireflies. From the initial announcement shock, they harnessed the moment in a perfect tweet. Following, they’ve leaned into fan support and genuinely engaged their audience, while also keeping a lighthearted tone given the situation. Not easy, well done.”

While the Fireflies are single and currently mingling, they shouldn’t have trouble finding a suitable Major League partner. Segra Park, located in the BullStreet District and home of the Fireflies, was voted as the 2016 Ballpark Digest Ballpark of the Year, as well as the Ballpark of the Decade for the 2010s.

The Fireflies hope to announce a new Major League affiliate in the coming weeks, but for now — they’ll keep hitting homers on Twitter. 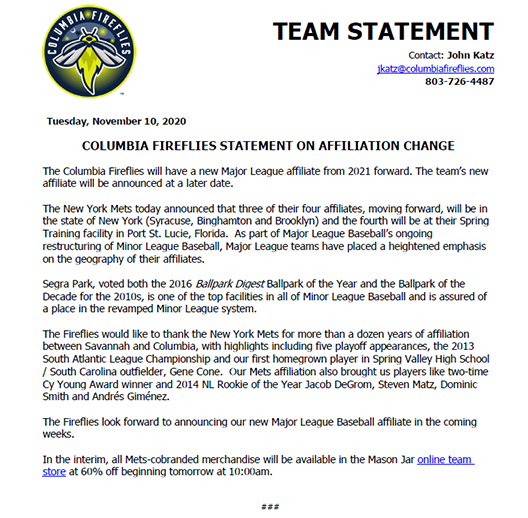 The Columbia Fireflies’ press release from President John Katz emphasizes the team’s positive outlook on the situation, giving hope to fans of the Fireflies. 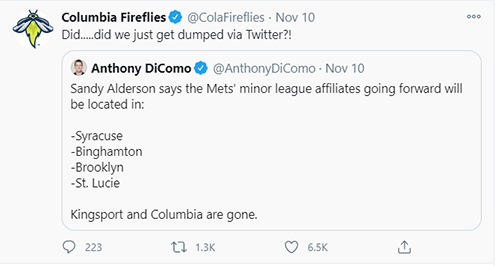 Katz and his team wished the New York Mets would have delivered the news a bit differently but this didn’t deter their light-hearted mood on Twitter. Photo credit: Columbia Fireflies. 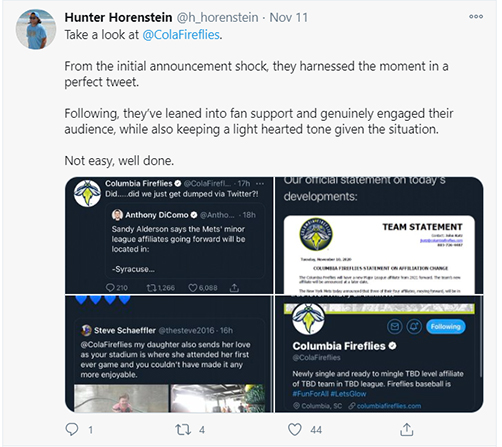