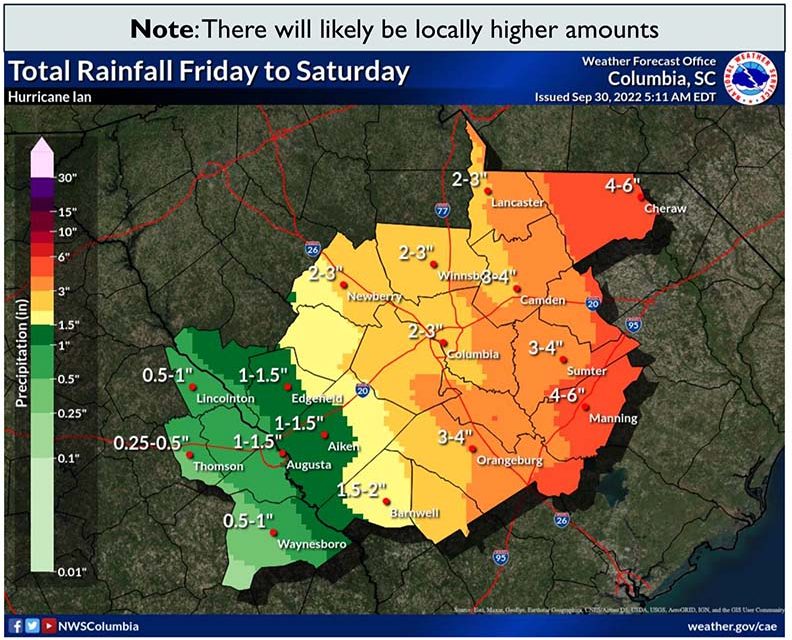 Projected areas of rainfall in the Midlands ahead of Hurricane’s Friday arrival in S.C. (Graphic courtesy of the National Weather Service Columbia)

The Midlands remained under a flood watch and a tropical storm warning as Hurricane Ian was downgraded to a post-tropical cyclone at about 6 p.m. Friday.

It made landfall in South Carolina as a Category 1 hurricane Friday afternoon.

Rain began falling just before midnight Thursday and was expected to continue into the early morning hours Saturday. In the end, Columbia should measure 1 to 1.5 inches of rainfall by midnight, the National Weather Service said.

The hurricane’s projected path early Friday shifted farther to the east, between Charleston and Myrtle Beach, decreasing the effects Charleston and Columbia would feel.

“It’s not as bad as it could have been,” S.C. Gov. Henry McMaster said during a midday news conference. “But don’t quit yet, it’s still coming. We are not out of the woods.”

The winds had the potential to bring down power lines and flood parts of the Midlands before the storm marches north towards North Carolina and Virginia. The speed of the storm was be a major factor into how much damage the Carolinas receive. One large tree fell near Columbia’s Devine Street corridor even before the winds picked up.

No deaths had been reported in South Carolina by 6 p.m.

But nearly 118,000 households and businesses had lost power by about 1 p.m., according to estimates. About 3,000 people were without power in the Columbia area. Officials cautioned against the use of candles during outages because of the risk of fire.

The hurricane came ashore near Georgetown, south of Myrtle Beach. Shortly after, four area piers were badly damaged, including those at Pawleys Island and Cherry Grove.

Offices across South Carolina said they were ready to help providing support to motorists,  roads, opening shelters and tree removal.

No flights took off from the Columbia Metropolitan Airport after Friday morning, as United Airlines, American Airlines and Delta, paused services into the area. Scheduled flights should resume Saturday, Kim Jamieson, the airport’s director of marketing and air service development, said Friday.

Ahead of the storm’s arrival, the University of South Carolina, other areas colleges and most Midlands K-12 schools called off Friday classes in anticipation of strong winds, heavy rainfall and flash flooding from the slow-moving storm. Most local government offices are also closed.

The Columbia Women’s Shelter and Homeless No More in Columbia were already at capacity Thursday after seeing an uptick of people searching for shelter ahead of Ian’s arrival, officials said. The city’s winter weather shelter will not open, as it is in the process of being renovated.

South Carolina fell under a tropical storm warning Thursday after Hurricane Ian hit Florida as a Category 4 storm and one of the most destructive hurricanes Florida has seen.

McMaster declared a state of emergency Wednesday afternoon. He decided against ordering a coastal evacuation, saying it would entail “a lot of disruption.”

Initiating a state of emergency allows the state to activate the National Guard and draw from FEMA money as needed.

Statewide, flooding is the biggest concern, according to the NWS in Columbia.

“Run from the water and hide from the wind,” McMaster said during a Wednesday news conference. “That is the rule here. Be sure to know where you are to be prepared.”

Columbia residents should avoid the nearly 30 roads that are prone to flooding in the Capital City, officials said. Intersections on Blossom, Harden and Wheat streets are especially low-lying and flood more quickly than the rest of the city.

“Whenever we have that prolonged period of heavy rain over a short period of time, we have flooding – and it happens fast,” said Mike DeSumma, spokesperson for the Columbia-Richland Fire Department.

The Columbia fire department encouraged people to stay home Friday and Saturday but to not cross roads with standing water if they did choose to travel.

Officials want residents to remember that it only takes one foot of water to move a car.

City and county firefighters worked with the Columbia Police Department to monitor the flood-prone areas. Officers were to be posted where needed to assist with traffic and barricades, city of Columbia spokesperson Jennifer Timmons said in a Tuesday email to the Carolina News and Reporter.

Dams and reservoirs overflowing or bursting are another concern the state is monitoring. But only minor flooding along the Midlands’ rivers is expected, according to the NWS in Columbia.

Dominion Energy said it released water from the Lake Murray dam this week as a precaution. It has crew members stationed throughout its service territory in the state. More than 200 crew members from other service territories have also come down for assistance, spokesperson Matt Long said. 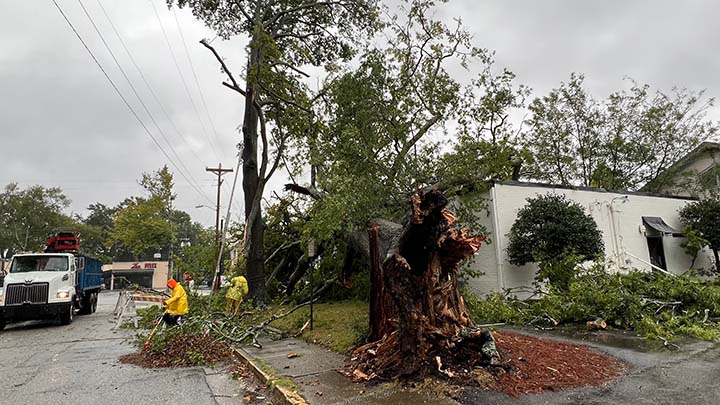 A tree that fell over during the early wind and rain of Hurricane Ian is removed Friday just off Devine Street. The hurricane could subject the Midlands to further fallen trees and debris. (Photo by Stephen Pastis)