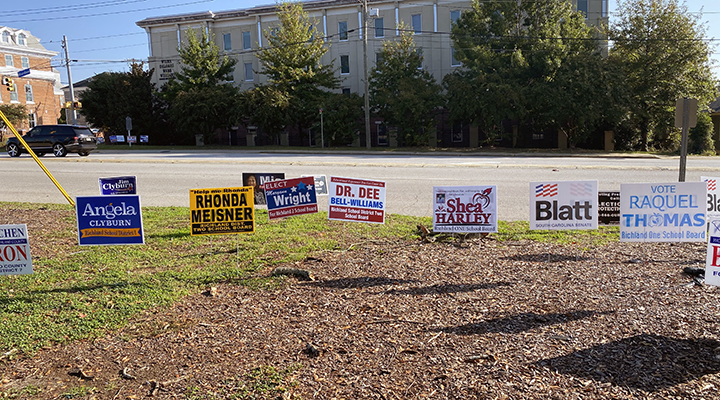 Shigaru Kabayoshi sat overnight at the door of Richland County Elections and Voter Registration office, just across from the many signs placed to influence other’s votes. Credit: Hallie Hayes

Shingharu Kobayashi completed his desired mission to be Columbia’s first voter in the 2020 presidential election, camping out overnight in front of the Richland County voter registration office so he could be first in line on Oct. 5.

“I thought I’d make a show of it – escalate the sticker selfie a little,” Kobayashi said. “My vote isn’t any more important than yours or anyone else’s in our community. If I wanted to bring extra attention to it, I had to somehow turn myself into an avatar of voting. Raising my hand and being the  first voter seemed like the way to go.”

“There are people who know me in town because I like to do projects based on the idea of ‘I don’t understand it, but I think I respect it,'” Kobayashi, general manager of Camon Sushi Bar, said. “My friend’s 12-year-old said that to me recently and it’s the best review I’ve ever gotten for my work.”

His witty personality and enthusiasm for interesting community projects has raised his profile in the community, said Caitlin Bright, a co-worker and friend who has known him for 15 years.

“If I had to describe him, I would say that he is an Excel spreadsheet under the guise of a mostly human form that has created the perfect algorithm for dry, witty humor outputs,” Bright said.

Kobayashi has started a project with Transmission Arcade’s Josh Rainwater to encourage flu shots called “Buy Your Friend’s a Round of Shots” and, 15 years ago, collaborated with designer John Pading to come up with “Columbi-yeah!” as a city campaign.

He spoke at the 2018 TEDxUofSC and 2012 TEDxColumbiaSC on infusing creativity and fun into the positive change that can be brought to one’s community.

“These projects are probably what I’d consider as my hobbies,” Kobayashi said. “I like to add small-scale positive texture to the lives of my neighbors.”

Kobayashi’s desire to be Columbia’s first voter originated from his idea that 2020 seems to be the year to vote, but it didn’t come without a little sacrifice.

“I am actually not passionate about voting, but it’s in the same way that I am not passionate about brushing my teeth,” Shingharu said. “Voting and participating in a democratic system is civic hygiene. It is very important and you do it to prevent some types of rot, but really it’s the minimum way for us to affect our communities.”

He checked out the terrain at the Richland County Elections and Voter Registration office at 2020 Hampton St. and figured out where he would camp to be first in line.

“Early voting started on a Monday, so I camped out on Sunday night,” Kobayashi said. “I announced my project on the Thursday before, and spent a few hours each day until Sunday sitting at the spot planning and tweeting my weekend.”

His fear of enduring the cold and quietness from the hours of 2 a.m. to 6 a.m. was short-lived.

“A friend brought by a pack of cold-weather camping gear,” Kobayashi said. “A bartender friend came to hang, since it wasn’t his bedtime yet. We talked about the disease-extending decisions that were being made at the state and federal levels that hurt our Food and Beverage Industry. These are leaders we select, or eject, by voting.”

When morning came, Kobayashi was first in line with many trailing behind him.

“The morning that in-person absentee voting started, people started lining up behind me at 5:30 a.m.,” Kobayashi said. “Doors would open at 8:30 a.m. These were clearly seasoned veterans of early voting. They were older folks who came every year to do this, and they brought their own chairs. I was very obviously the tourist in this situation. I hope I grow up to be like them.”

Voting for a stronger community

“While voter turnout for presidential elections is generally much higher than the turnout for other elections, the numbers for absentee voting we have seen leading up to election day indicate there is a lot of interest in voting this year,” Catalano said.

Catalano expects over a million absentee ballots to be cast for this election.

Kobayashi had his own method to decide the best candidate for him.

“I try to stay on top of the news headlines every day, but I don’t do very deep dives into the candidates,” Koayashi said. “When I had an hour while camping out, I looked up my favorite election website, vote411.org, from the League of Women Voters. Check it out if you haven’t seen it yet. It’s got all the information you’ll need about your polling place, and there are surveys that all the candidates have filled out. I made all my down-ballot decisions based on the answers there.”

In a time where voting is more relevant than ever, Kobayashi voices the importance of stepping out of one’s comfort zone and doing a simple civic duty that leaves a lasting impression.

“Doing anything you don’t normally do is always a little intimidating, but thankfully this one is easy,” Kobayashi said. “You don’t even have to know everything about all the candidates. There are lots of people who are more ignorant than you who are casting their ballots. If you only jump in there just to cancel out one vote of your enemy, hey that’s valuable.”

Kobayashi hopes for a strong community that comes from a strong leader — one of many reasons he does these unique projects and what he calls his civic duty.

“I wish for leaders who are interested in building, repairing and maintaining the floor of our communities,” Kobayashi said. “Then all the community members can build their fantastic strange structures on top of that base level. 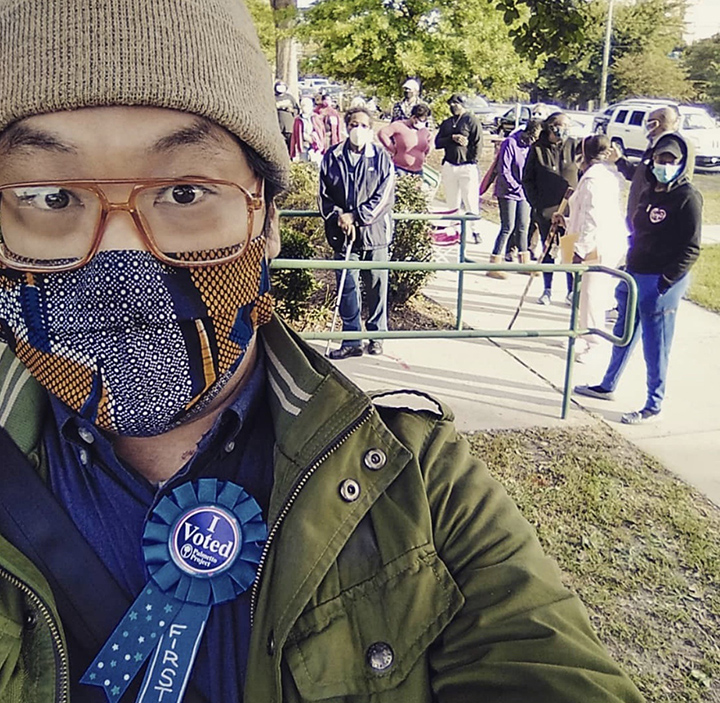 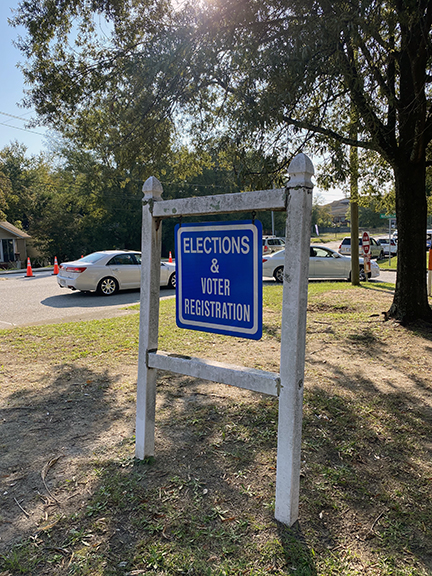 One place to vote in the Columbia area is at the Richland County Elections and Voter Registration office, located at 2020 Hampton St. Photo credit: Hallie Hayes 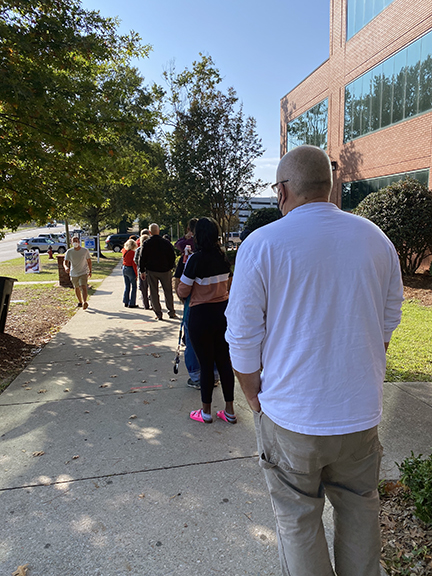 Many wait in line to cast their 2020 ballots. Photo credit: Hallie Hayes 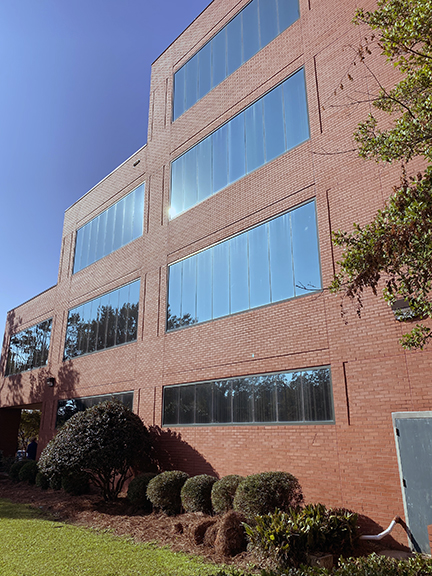 Just through the doors of this building is where voters can cast their ballots. Photo credit: Hallie Hayes