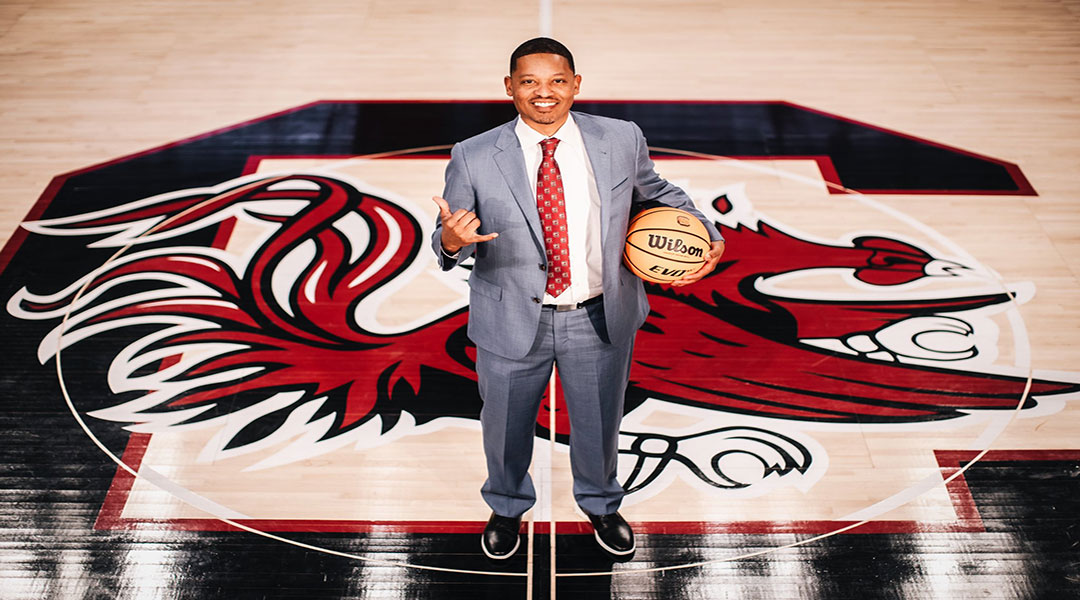 After a season with Vanderbilt, men’s basketball player Matt Ryan was looking for a change. The 6-foot-7 small forward entered his name into the NCAA transfer portal and two days later, Ryan was sitting down with then-Chattanooga head men’s basketball coach Lamont Paris.

Over the course of three hours, Ryan listened to Paris talk about his vision for him and the program. Paris’ lunch got cold as he talked in detail about basketball strategy. After the lunch, Ryan transferred to Chattanooga for his last year of college ball.

“When it came down to it, I trusted him more than any other coach,” Ryan said. “I ended up choosing [Chattanooga] just because of Lamont.”

Now, Paris is bringing that humanity and commitment to the University of South Carolina, where he was named last week as the new head men’s basketball coach. The 33rd head coach of the program agreed to a five-year, $12 million contract, a considerable raise from his $250,000 per year salary with UTC.

He succeeds Frank Martin who parted ways with the Gamecocks after 10 seasons and was sworn in as the next head coach at UMass last week.

During his five years in Chattanooga, Paris turned the program around, leading the 2021-22 Mocs to a SoCon championship along with the program’s first NCAA Tournament berth since 2016.

Paris is largely credited with doing this by utilizing the transfer portal, attracting experienced college basketball players to UTC. For Ryan, it was Paris’ trust in him that set Chattanooga apart from other contenders.

“I was looking to play for a coach that believed in me on and off the court and was going to allow me to play to my fullest potential and that’s what Coach Paris did. I probably wouldn’t be in the NBA now if it weren’t for him,” said Ryan, who now plays for the Boston Celtics organization.

Thomas Smallwood, who now plays for CB Menorca in Spain, was also one of Paris’ first transfers after Smallwood played three seasons at UAB.

The 7-foot center said the big driver behind going to Chattanooga was the staff that Paris put together and the genuineness he felt from the Moc head coach.

During his one season with the Mocs, Smallwood said Paris and his staff cleaned up his game really well as well as putting him and his teammates in situations where they could learn.

However, off the court, Paris helped Smallwood transform into a leader as an older player on a young team.

“Putting me in that position and giving me that responsibility made me grow as a person,” Smallwood said. “Being around good influences, good coaches like that and a program like the one they were building, overall, made me a better person.”

Paris’ character also goes beyond his time at Chattanooga. Before first leading the Mocs in 2017, Paris was an assistant under Wisconsin head coaches Bo Ryan and Greg Gard for seven seasons.

“He was always someone I could talk to about not just basketball. We’d talk about being a young man and what to look forward to, being a young Black man, a basketball player, what’s going on in pop culture and in the world. It wasn’t just x’s and o’s basketball,” Hayes said.

While Paris is only a player’s coach for a few years, his mentorship continues after graduation. Hayes said he still texts his former assistant coach, most recently congratulating him on Chattanooga’s SoCon title this past season.

Aaron Moesch, another former Badger under Paris, says ‘LP’ looks at all former players, coaches and managers as family.

“As a person, I learned more from LP after I graduated. I had the privilege of going down to Chattanooga twice the he was coaching there. Both times, he opened his doors and welcomed me with open arms,” Moesch said. “He truly made me feel like family that was visiting from out of town.”

As someone who has known Paris before his time at Chattanooga, Hayes said it’s been great to see him climb through the coaching ranks and have the success he had with the Mocs.

Now, with Paris starting a new chapter in his coaching career, Hayes is confident that that success will translate over to South Carolina.

“[South Carolina is getting] a genuine man and coach, which I think is all you can ask for,” Hayes said. “At the end of the day, people always can relate, care for and support someone who is genuine with himself, his staff and his players.”