From Ridgeway to the runway 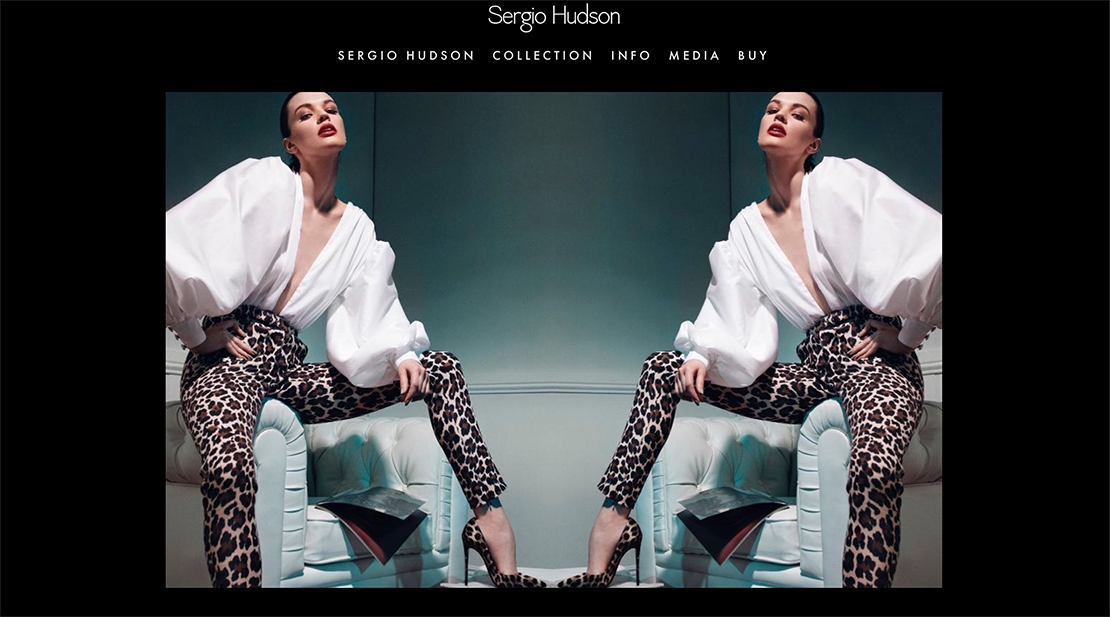 Sergio Hudson designs, including the Fall 2019 collection, can be purchased on his website at Sergiohudson.com.

Designer Sergio Hudson’s Fall 2019 collection has just been released, and everyone, including Beyoncé, is loving the South Carolinian’s designs.

Beyoncé was seen wearing a piece from the Fall 2019 collection on Feb 12. Her outfit included a white shoulder-padded jacket and skirt with embellishments that Hudson said were inspired by looks from the 1970s.

“I said, ‘Either you go big or you go home,’ so I found the biggest Swarovski crystals I could find,” said Hudson, who now lives in Los Angeles. “I had them hand sewn all over the jacket and skirt.”

The Sergio Hudson line can be found in stores in California, New York and Europe – but not in South Carolina, where he grew up.

“I’m trying to get in some stores back home because we have absolutely no representation there and I have a huge fan base,” Hudson said. He understands that not everyone enjoys shopping online, but for now, buyers in South Carolina can find Sergio Hudson clothing on his website.

Carol Dobbs, owner of C Dobbs Boutique in Newport Beach, California, sells the Sergio Hudson line. She said Hudson brought her pieces from his Fall 2018 collection and within hours they were sold.

“He pays attention to details like I have never seen before,” Dobbs said. “It’s the height of fashion and class.”

Hudson said one of his first breakthroughs was in 2009 when he started dressing Lisa Wu from Real Housewives of Atlanta. Then came Kendall Jenner’s black jumpsuit that he designed for her 20th birthday.

Since then, Hudson has picked up supporters like Khloe Kardashian and Jennifer Lopez. Sergio Hudson designs can be seen on celebrities such as Britney Spears, Janelle Monae, Miley Cyrus and Regina King.

“Sergio is a very talented individual,” said Hudson’s partner Inga Beckham, who recognized Hudson’s talent and decided to invest in his design house. “He was born with a gift.”

Hudson, 34, was born and raised in Ridgeway, South Carolina. “I was a normal Ridgeway country boy, my granddaddy had a farm, we ate from the farm,” Hudson said. “I didn’t even know how much vegetables cost because I never had to buy any.”

His interest in fashion started at the age of four through his family. “It was just key women in my life that weren’t normal, per se, to what people where we’re from are normally,” Hudson said. “Fashion was always a part of our lifestyle.”

Hudson’s mother, Sheldon Hudson, founder and senior pastor of Across All Boundaries Christian Church in Columbia, had a tailoring boutique when Sergio was young.

“He would sit underneath the machine and pick up the scrap pieces off the floor and match different pieces,” she said.  “A child of this age should not know what fabrics should go with what. The eye he had, he was destined for greatness.”

“When I was young, I thought, ‘Oh that’s just clothes,’ but as I grew up, I was like, ‘Oh, most people don’t wear the stuff that she did,’” the designer said.

Because Hudson’s older sister was a runway model, the family also got the opportunity to travel.

“The rural area did not provide a cultural experience. Traveling beyond exposed him to a culture that he would later walk in,” his mother said.

Hudson’s mother knew he was gifted, but because she wasn’t professionally trained in clothing design, she decided it would be better for Hudson to go to design school.

“My promise to him was I would send him to school to learn,” Sheldon Hudson said.

Hudson didn’t get involved in making his own clothes until he attended Barter College, which was once the oldest design school in the Southeast. Hudson started working professionally after he graduated in 2005, making a name for himself through custom designing and dressing specific people.

In 2013, Hudson won the Bravo American reality competition TV show “Styled to Rock,” produced by Rihanna. “It helped me be the designer who I am,” Hudson said. “After the show, I really stepped it up as a designer.”

The Spring 2015 collection was the first Sergio Hudson collection to be released and showed the bold way Hudson blended classic and edge in luxury fashion. He has released five more collections, including the Fall 2018 collection that Hudson says “hit the vein.”

“That was the first collection that I really just did what I wanted to do,” Hudson said. “I really feel like that was a turning point for us.”

The Sergio Hudson Fall 2019 collection is now available as well; it was released on Feb 8 and has been released with a pre-sale since Feb 15. “It was directly inspired by the ’70s and Donna Summer and last year we worked heavily with J Lo, it was just kind of a perfect storm of everything,” Hudson said.

He mentioned that though he normally isn’t inspired by music, Donna Summer’s “I Feel Love” gave him the inspiration for Fall ‘19 one day while driving home from work. “I was like, ‘oh my God, this song is really inspiring me and making me think of outfits.’ It was a moment,” Hudson said.

“I think his designs are ahead of his time,” Beckham said. “The use of colors and sharp lines while also being elegant, it’s fashion forward.”

Hudson’s designs have always been inspired by women; Hudson said he uses inspiration from his family, thinking about what his niece who is 20 would like as well as his mom who is 58.

“I purchase a piece from every collection,” Dr. Hudson said. She said that Sergio Hudson is a line with a variety of designs that she can wear in church and that Beyoncé can wear on stage.

“I think it’s taking care of the woman who wants class, who wants quality, and who wants everlasting style,” Dobbs said. 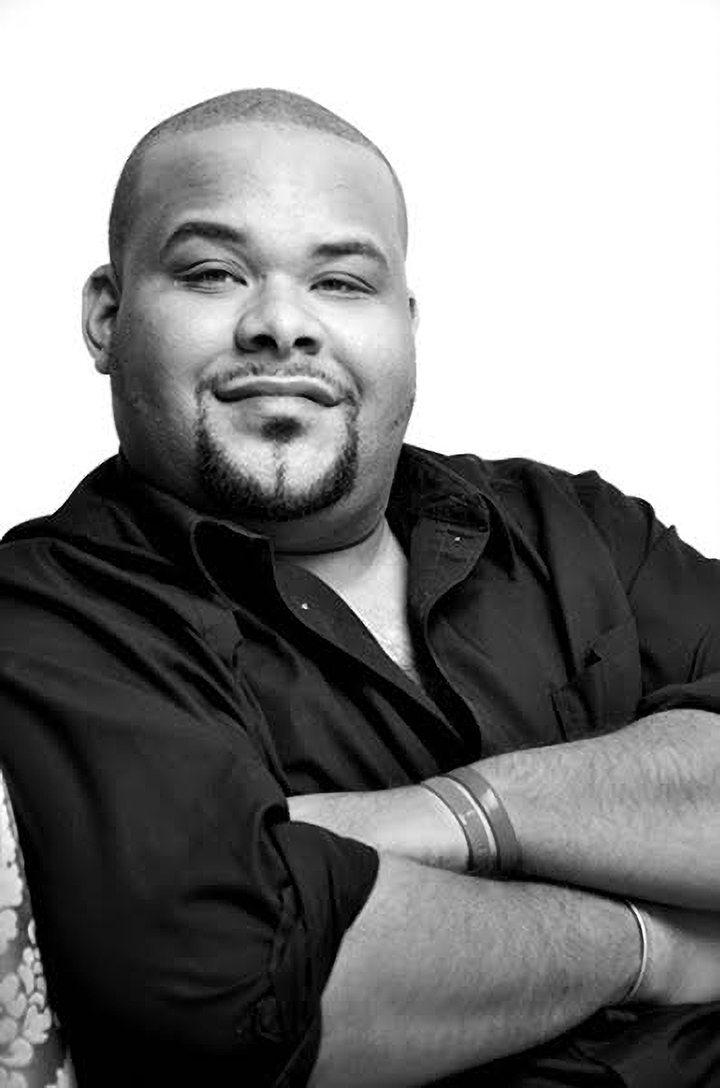 Designer Sergio Hudson, 34, is a South Carolina native who now lives in Los Angeles. He is known for his luxury clothing line that is both classic and edgy. 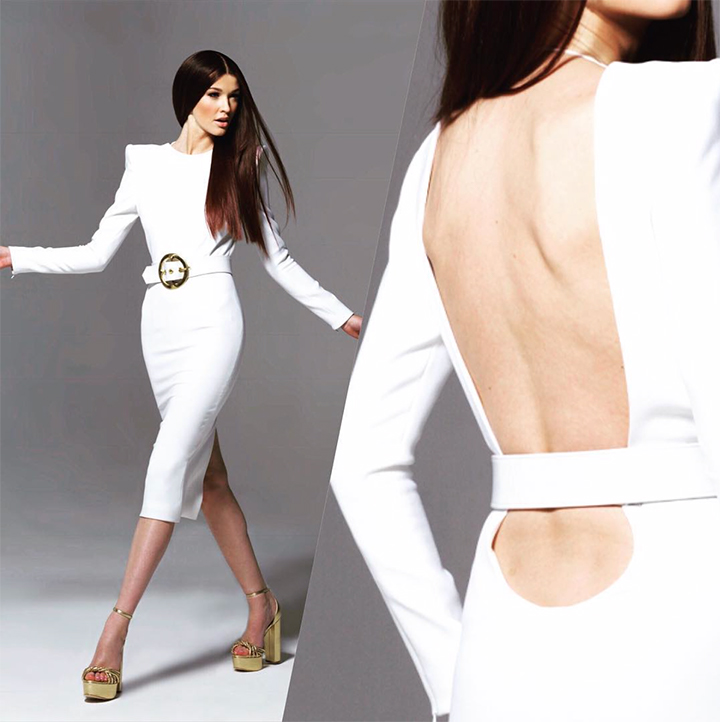 A white pencil skirt dress with a low cut back and shoulder pads is from Sergio Hudgson’s Fall 2019 collection that was released on Feb. 8. 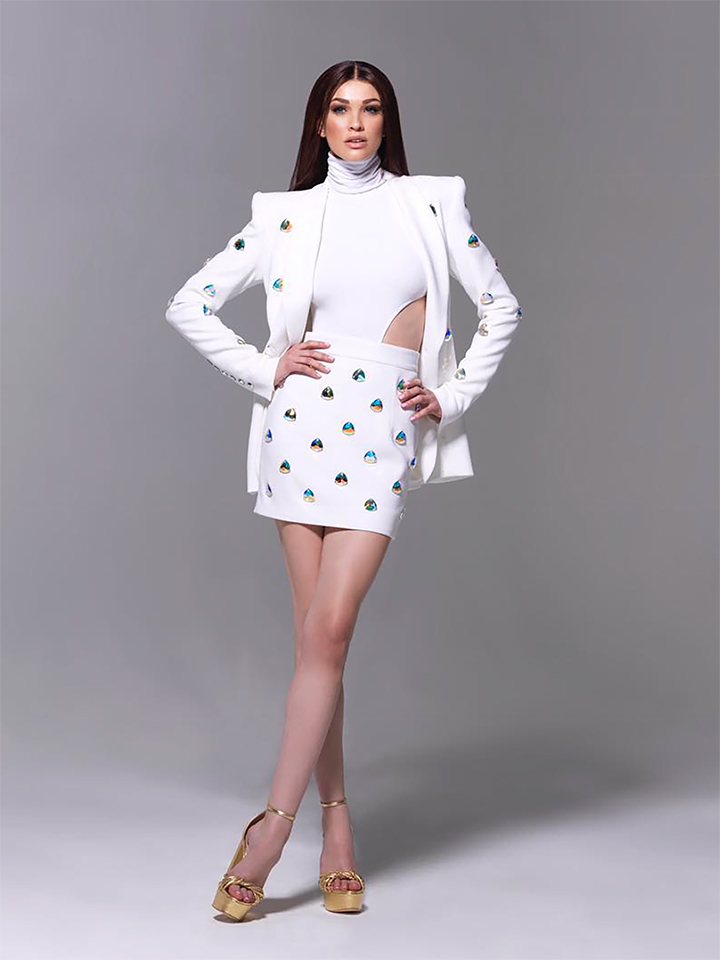 This white suit including hand-sewn Swarovski crystals on the jacket and skirt was worn by Beyonce. 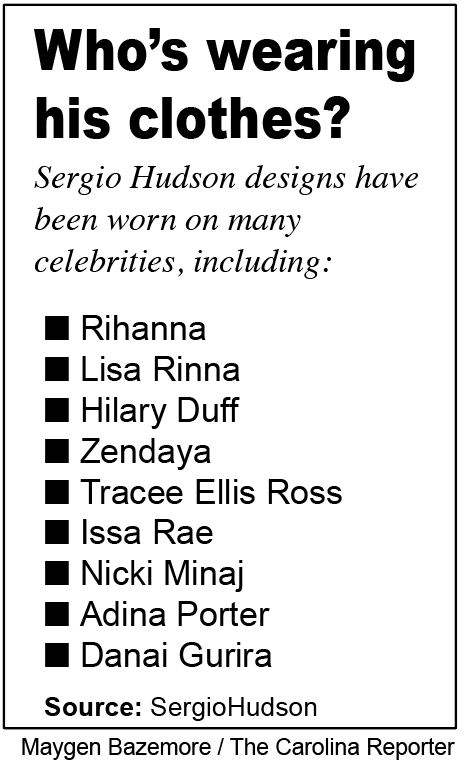 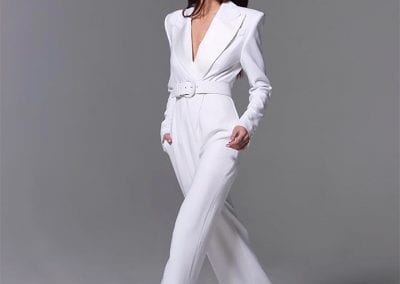 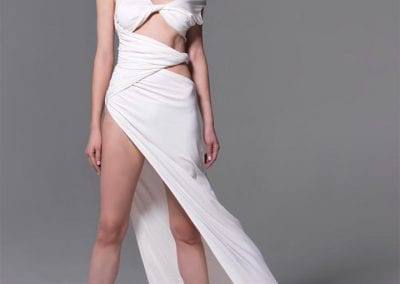 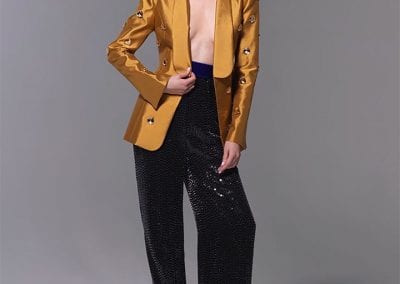 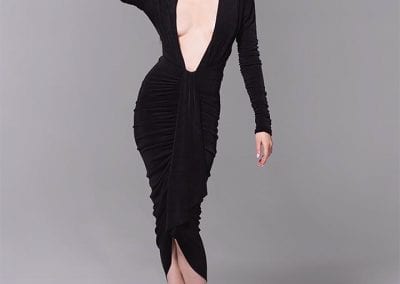 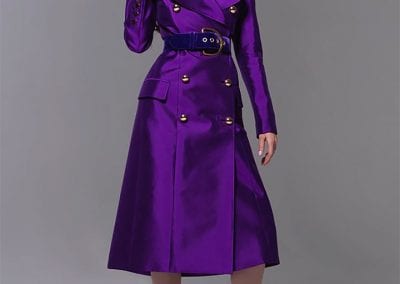 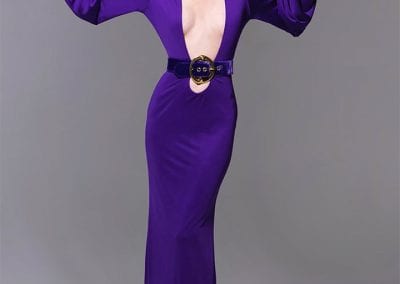 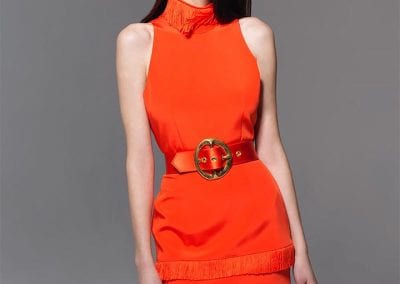 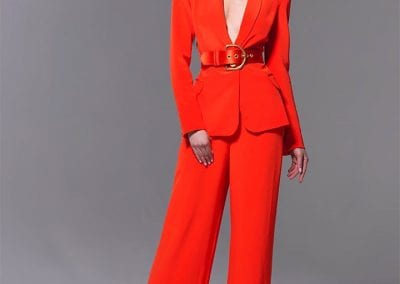 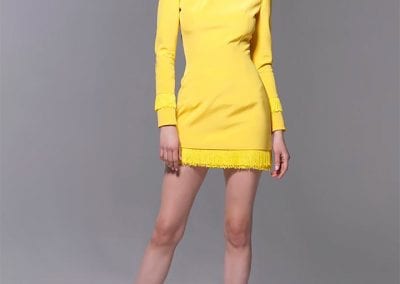 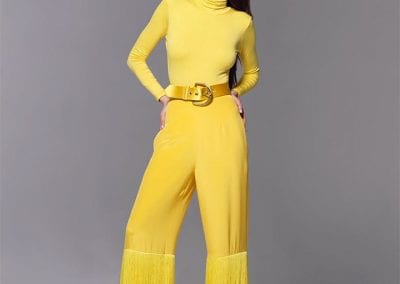