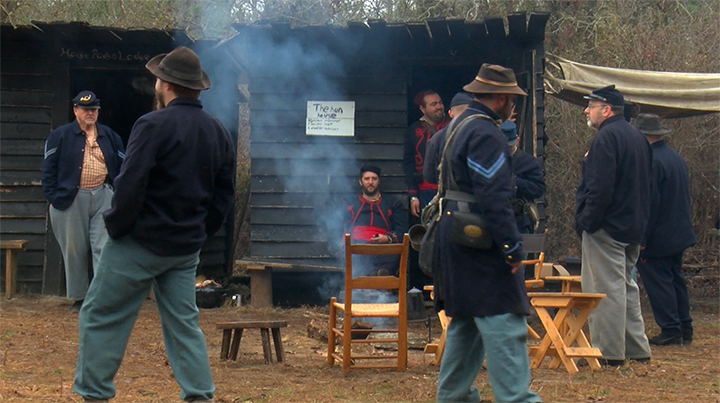 The Battle of Aiken features authentic 19th-century military encampments, like the one pictured above.

AIKEN, S.C. –  Each year re-enactors come to this charming southern city to eat, sleep, live and fight as if the Civil War was still raging.

Wearing heavy gray or blue wool coats and hats, with gunpowder staining their hands and dirt smudged on their faces, the Confederates and the Yankees battled as if it were 1865, then retired to their nightly campfires to share stories in the misty rain.

“If it gets wet, we get wet, if it gets cold, we get cold, if it gets hot, we get hot, but we try to put it aside even though we’re 21st century guys that are used to cell phones and all the modern convinces of life,” said Will Christman, a high school social studies teacher from Augusta. “And we try to put that away for just three days. If the guys back then could do this for four years, we can do it for three days.”

For this, the re-enactment of the Battle of Aiken, the camps were filled with white tents, neatly stacked guns, and smiles. Around a wide open field, dozens of cannons lined each side, while spectators sat along the field.  One side bore a Confederate flag, the other an American flag.

People jumped as the loud bang of the cannon signified the beginning of the battle. They used real guns and cannons, but no ammo, just gun powder for sound effect. And as history goes, it was a hard fought battle won by the American forces. People both young and old come together over their shared love of history, including students at the Citadel.

“I’m named after the Civil War, so I thought it would be cool to maybe try it out once or twice and I actually got into it,” said Shiloh Smiles, a Citadel freshman. “You know, camping, meeting all these cool people, getting to work with, well it was actually the first time I touched a real gun. It just was a lot of fun, I got to make a lot of new memories.”

While the battle represents a time of division, the re-enactment is a time to bring people together to reflect and bond over their love for the Civil War.

“I love the Civil War, it’s awesome, you can always learn more things and it’s such an American thing, that is really cool to do,” said Christman. 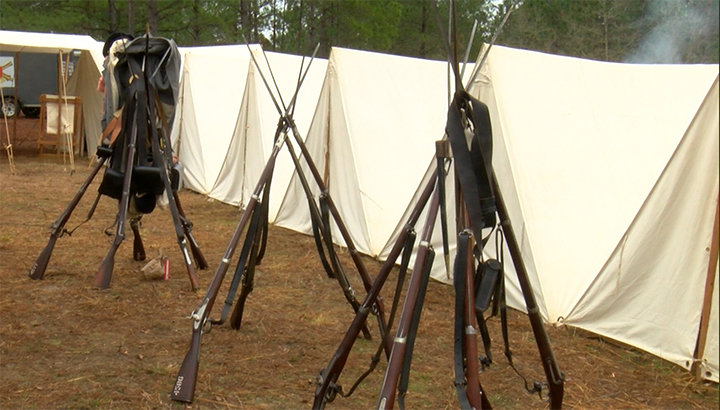 Re-enactors at the Battle of Aiken spent the weekend camping in tents like these. 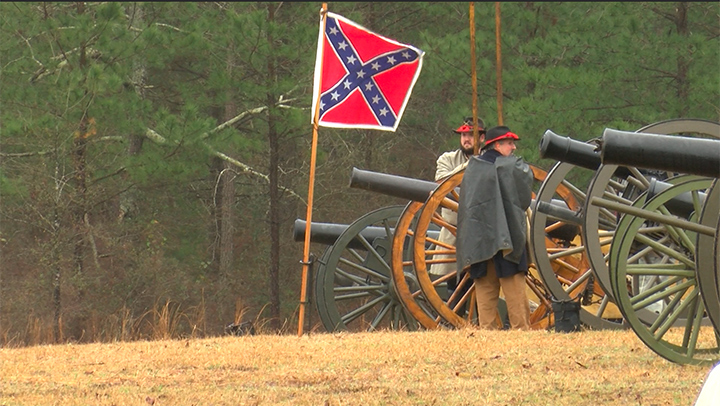 Re-enactors recreate the battle of Aiken using cannons, muskets among other authentic weaponry.

Having traveled to Thailand, Laos, and Africa to teach and volunteer, Brooke has an understanding of the struggles many face around the world each and every day. Her travels planted the seed for character growth and strength. From there, she realized that just because an issue isn’t in your face doesn’t mean it’s not impacting others in major ways. She hopes to bring this newfound passion to her journalism career by shedding a spotlight on issues around her that are often neglected. Brooke aspires to become an investigative reporter.