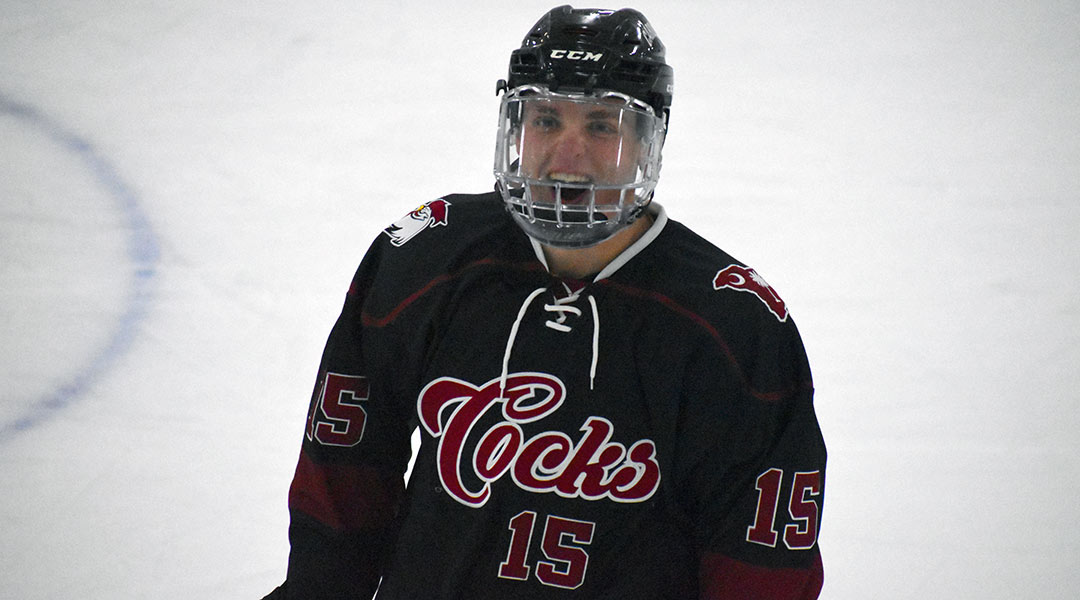 Four years ago, Owen Thomas and his friends were passing out pamphlets outside of the University of South Carolina’s Russell House.

They wanted people to know about the Gamecock club hockey team that’s been around more than 20 years.

“We were like, ‘Please come to our games,’” Thomas said. “And everyone was like, ‘Oh, we have a hockey team? What do you mean?’”

After a 3-0 start, with wins over Clemson and Coastal Carolina, interest rose. The Gamecocks next game was a Friday night home game against Vanderbilt.

“I kind of expected nothing of it,” senior goalie Liam Gormley said about fan interest that night.

Team members couldn’t say what previous attendance numbers were, but this game on this night was different.

“We came out and there was a good 300, 400 fans there,” Gormley remembered. “I was blown away because I just came from high school hockey in New York, and even then we didn’t have that many fans.”

The team plays at the Flight Adventure Park in Irmo, otherwise known as “The Plex.” The rink has more than 600 seats but can hold more in the standing room only areas.

The Gamecocks beat Vanderbilt 7-0, and Gormley realized there was potential to grow the team — and the team’s brand.

Fast forward to 2022, and Cock Hockey is thriving, leading its division with a 14-2 record.

Demand also has grown. Tickets to the Nov. 18 Tennessee game sold out in three minutes.

Thomas remembers when the team started to string together multiple wins and the crowds were getting out of hand.

“All of a sudden, we were playing UGA and there were probably about 1,000 people there,” Thomas said.  “It was ridiculous. The fire marshal had to come in and was like, ‘We’ve got to shut this down.’ It’s been crazy.”

Increased attendance has increased passion. During last year’s home game against Clemson, the plexiglass around the rink shattered.

“There was something along the boards, and I saw someone shaking it,” Thomas said. “We say, ‘Hey, you got to stop shaking it. Stop.’ It snapped in half in the middle of the play. And everyone was like, ‘Oh God.’ I’ve never seen that happen.”

In 2021, when the team was gaining attention, one of its social media posts went viral. The hockey team announced its new home starting in 2023 would be the 12,401-seat Carolina Coliseum – the former home of Gamecock basketball.

Ben Smith, a former player and the team’s social media manager, came up with the idea.

“(Smith) toyed around with the idea of it, you know, because we’ve always talked about how cool it would be,” Gormley said. “He was playing around in photoshop and threw a wrench in there and was like, ‘Why not?’ We’ll see how it goes.”

“Y’all really thought we were gonna get rid of the most electric D3 ACHA hockey atmosphere in the country the Plex??” Thomas also commented on his Instagram account.

He said it’s “a lot of constant work,” spending about two to three hours every day creating posts, including graphics, starting lineups, scores and videos on the team’s Facebook, Instagram, TikTok and Twitter accounts.

“Whenever you get anything, you’ve got to be ready to go,” Gormley said. “You’re sitting in class, you got something about your game that week or the next week, you’re always updating and whatnot. But, I mean, it’s a lot of work around the clock, coordinating with other people and that kind of stuff.”

Social media does more than recruit fans, it also has recruited players.

“They have such a wide social media presence that, I mean, it was one of the big things that really made me come here,” said Smojice, now one of the team’s wingers.

During this fall’s team tryouts, more than 100 hopefuls competed for 10 spots on the roster.

“A lot of people in high school want to go play college hockey, whether it be Division 1 or Division 3, but they never considered club hockey,” said Bobby DiCicco, a junior defenseman and team president. “With the use of our social media growth and our ability to reach those high school players, it’s been able to change their minds about always wanting to go the Division 1 route.”

When Marc Lazzaroni joined Cock Hockey’s merchandise team in January 2020, it had little to no gear to sell.

“I think we had a little table where we sold some pins, buttons and small stuff,” said Lazzaroni, now the team’s vice president of merchandise. “Pucks, I think, was our biggest thing then, and now it’s so much bigger than that.”

Jerseys have been the biggest seller. So much so, Lazzaroni said, that the team outsourced its jersey sales because it couldn’t handle the demand.

“We were like, ‘We can’t do this out of our house anymore. We need to start working with another company to make it actually happen,'” he said.

They met with Andy Sutton, a former NHL veteran and CEO of Verbero Hockey, an apparel and equipment company.

The result is the team’s latest design, a black jersey with the jersey number and the word “Cocks” written in garnet across the chest. The South Carolina state flag rests on the left shoulder while a rooster is on the right shoulder.

The jerseys were a limited release, available online only for 10 days in November.

The word “cocks” looks similar to the script of the varsity baseball jersey, so Sutton needed to jump through some legal hoops.

“They went through (Collegiate Licensing Company) to get it approved,” Lazzaroni said. “And now that it’s good to go, we can do a retail sale, which is where we make most of our money.”

The black jerseys debuted at the Nov. 18 game vs. Tennessee. Sutton said more than 550 jerseys sold, 200 more than the previous limited-edition sale in September of garnet and white jerseys.

“It’s the most successful drop we’ve had so far,” Sutton said. “Obviously, that blacked-out look is super aggressive, and I think everybody’s clearly loving it.”

In January 2020, former Gamecock quarterback Ryan Hilinski made an appearance at the Plex, wearing a white jersey. Football coach Shane Beamer, wearing a hockey jersey, delivered the ceremonial puck drop before a game in February.

“That was a production but in the best way possible,” said Lauren Barth, the team’s vice president of management. “I was a bit nervous because there was a lot going on. We had all these decorations — Shane Beamer’s coming out as a big guest. So planning for that, I want to say we did a couple of weeks out.”

When musical artist Post Malone came to Columbia in mid-October for a performance, a Cock Hockey intern who also works part-time at Colonial Life Arena included a garnet jersey in Malone’s welcome basket.

“We all knew that he wore some hockey jerseys (at his concerts),” Barth said. “I don’t think anybody was expecting him to wear it. Some of us were like, ‘Oh, what if he does, though?’”

As fate would have it, Malone came out on stage that night wearing the jersey from the basket.

“I’m in Nashville, and I get a text from my friend, and she goes, ‘Post Malone just walked out in a hockey jersey,’” Barth said. “So I’m freaking out. My phone is blowing up. … We barely had to do any work to get that set up, yet it went so well.”

“There wasn’t a lot of organization with the marketing team last year,” LaPointe said. “And so they tried to go for sponsorships, but I don’t think we were quite big enough. But now, we’re big enough and we’re continuing to grow at an exponential rate.”

Grill Marks, located in the Vista, created a new burger with the team in mind.

The Hat Trick consists of three smash patties with three types of cheese. In hockey, a hat trick is when a player scores three goals in a game.

“We sell a dozen or two a week, and that’s without it being on the menu,” said Robert Skinner, district manager for the hamburger chain. “So it’s certainly been a great seller. The fan base has been great to us.”

It wasn’t easy to land sponsorship deals, LaPointe said. He would go door-to-door, trying to convince businesses to become a sponsor. There were plenty of “no’s” before anyone agreed to it.

“Even though we’ve been around for 21 years, I think we’re still in our infancy when it comes to how much we can really grow,” he added.

Since the 2021 April Fools post was successful, the team wanted to try it again. They announced on social media they would play Villanova in Williams-Brice Stadium in 2024.

“I had a picture of Willy-B on my computer,” Gormley said. “And I pulled up a picture of the (NHL) Winter Classic. I was like, ‘I can make this work.’”

While those satirical posts work for laughs and publicity, Cock Hockey is a long way from realizing the dream of an on-campus facility.

While the team regularly sells out its 600-seat rink in Irmo, Carolina Coliseum holds nearly 12,500, while Williams-Brice seats more than 77,500.

“That’s been the dream to play somewhere at that kind of venue,” Gormley said. “And we’re just trying to get there, and growing more and more is part of that. Once we can show that we can have that audience, that’s when we can make that step by then.”

For now, Cock Hockey will continue to play in Irmo, while keeping its long-term goals — and its social media jokes — alive. 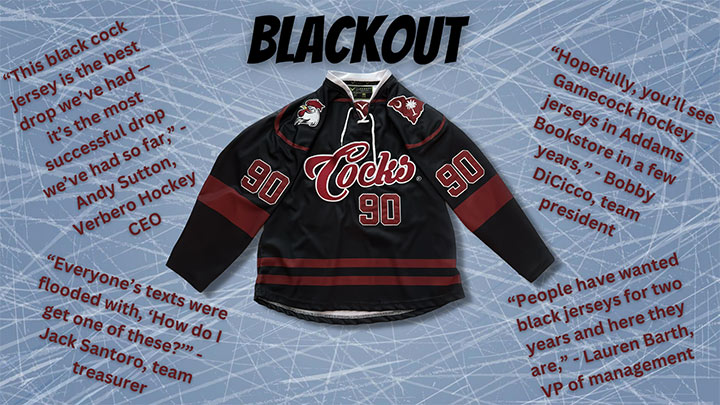 Cock Hockey partnered with Verbero Hockey, an apparel and equipment company, to release its new black jerseys during a Nov. 18 home game. 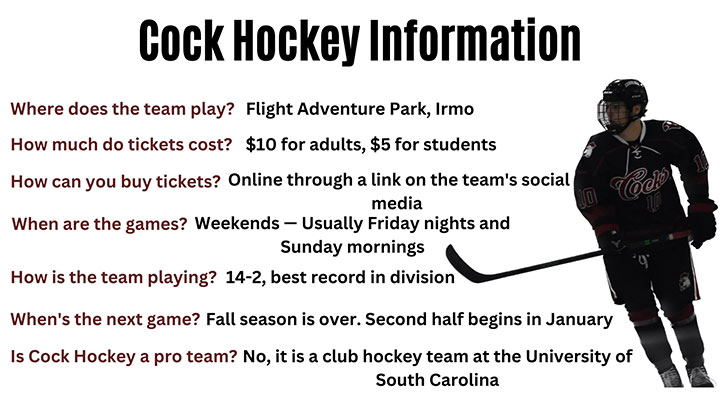 Want to learn more about Cock Hockey? Here’s the need-to-know information about the team. 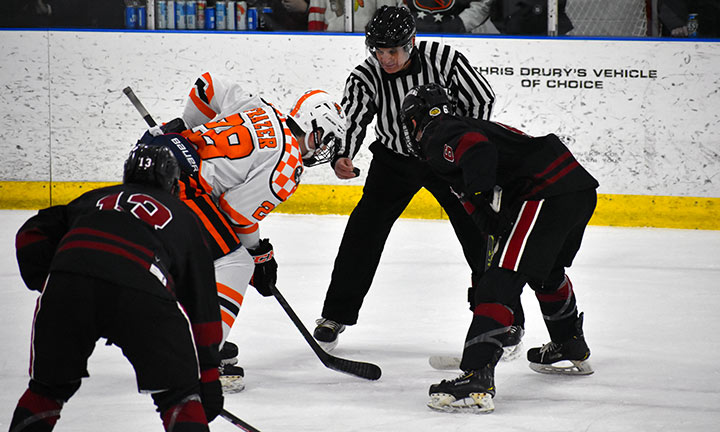 The Gamecocks defeated Tennessee 7-0 on Nov. 18, only adding to the team’s division lead. 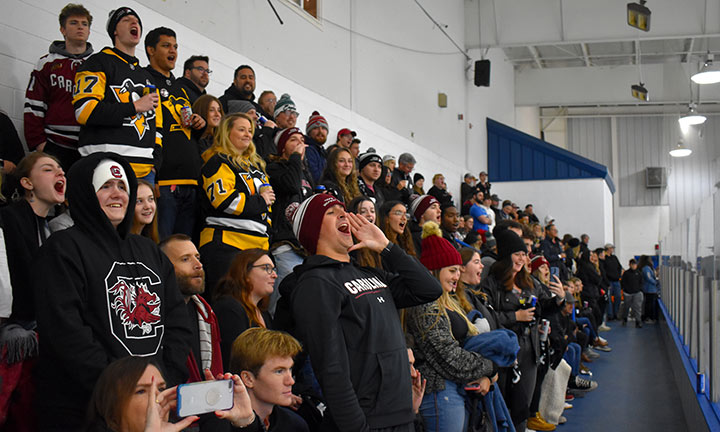 As with pro hockey, club hockey fans are rowdy. Before the team’s game against the Volunteers, Cock Hockey’s fans were booing the visiting players as they stepped onto the ice. 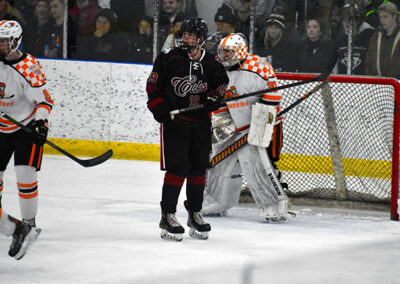 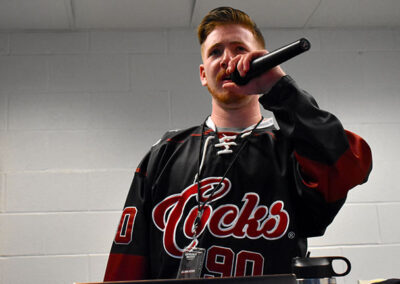 Luc LaPointe has been the team’s public address announcer since 2021. He enjoys playing music at games, with his favorite being “Rocky Top” by The Osbourne Brothers. 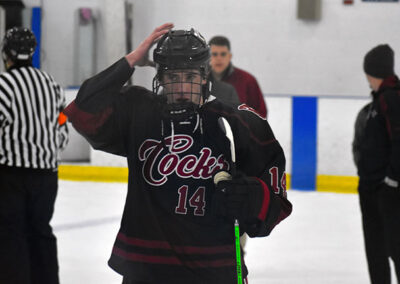 Senior center Rob Lawrence steps off the ice as a period comes to an end. 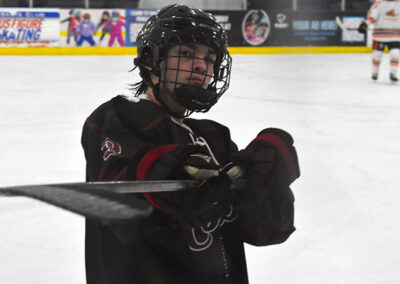 During a break in the action, Brendan Flaherty looks into the crowd, amazed by how many people showed up. Flaherty is a freshman defenseman. 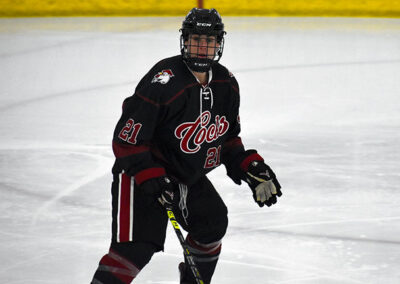 Zachary List is a sophomore defenseman for the team. He previously played at Western New England University. 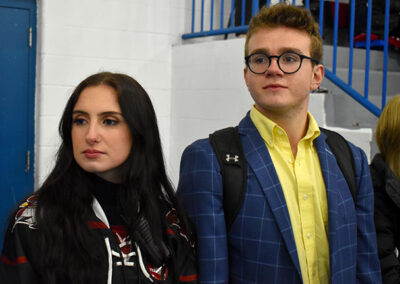