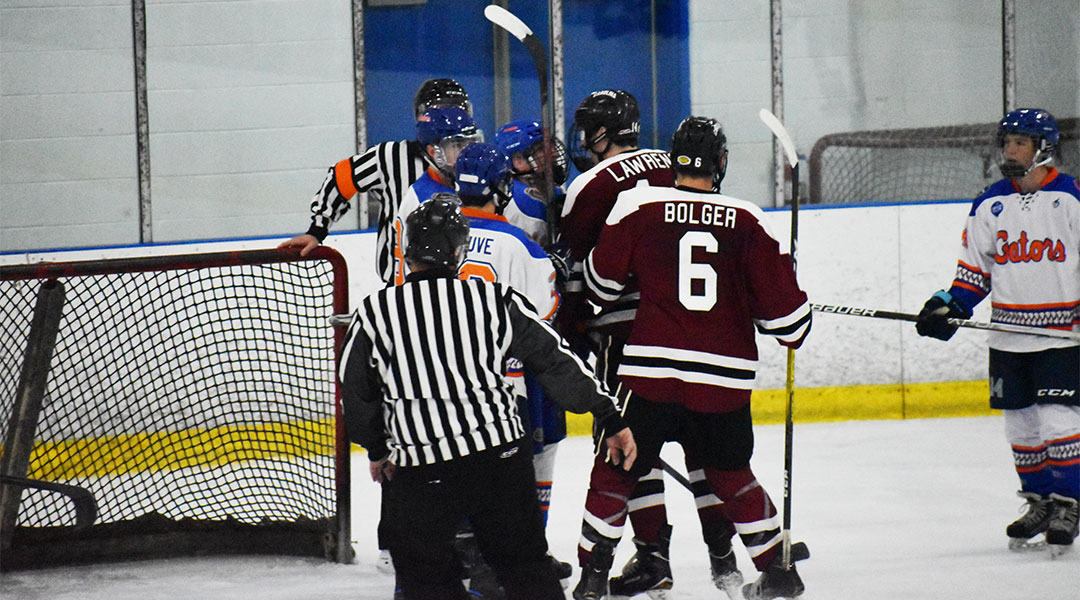 Robert Lawrence scored his first goal of the season against Florida, but the referees had to break up a scuffle between him and a Florida player. The referees defused fights all throughout the game. Photos by Noah Patheja

The University of South Carolina club Hockey team completed its domination of Florida with a 6-2 victory Sunday. The Gamecocks and Gators combined for 21 penalties and two ejections in a critical conference match.

The Gamecocks also took advantage of the Gators, who were playing with a limited roster.

“I knew they would get tired in the third period,” said Gamecock Head Coach Allan Sirois. “They just ran out of gas.”

The Gamecocks found goals from veterans like Owen Thomas, but forward Connor Burman and center Robert “Bobby Law” Lawrence scored their first goals of the season on Sunday.

“I was impressed with Bobby Law,” said Sirois. “I kind of called him out on his performance Friday. I put him with Bolger and Greeley on the second line, and he really responded.”

Lawrence has four assists this year, but it took ten games for him to finally get one in the net.

“It felt awesome,” said Lawrence. “I definitely felt better coming off the game Friday because that was one of my rougher ones, so it was nice to bounce back.

Goalie Trip Russell finished the game with 23 saves and a 0.92 save percentage. Russell was a critical part of South Carolina’s penalty kill.

“We played a chippy game, and sometimes the refs see what they see,” said Russell. “You can’t really change it. you just have to try and persevere.”

Russell helped the Gamecocks kill 11 penalties, including a 5-on-3.

“We all played tough,” Russell said. “If we can battle through them [penalties], we’re gonna win the game.”

Despite the dominant offensive performance, Sirois knew the Gamecocks needed to improve on the penalties.

“We found the [penalty] box too many times today,” said Sirois. “Just improving on our discipline, guys are too wired up sometimes. Going forward, we’re gonna need that to win more games.”

Sirois may not like the penalties, but Lawrence feeds off of the physicality of the game.

“It felt amazing,” said Lawrence. “Especially after going out there and having a physical game like that, it just made it so much more worth it. Those are my favorite kind of games.”

The Gamecocks are now 8-1-1 and second in the Southeast Collegiate Hockey Conference. Gamecock hockey is now on a six game winning streak, but they’ll have to prepare for a road trip against Florida Atlantic, who has the largest goal differential in the conference.

Sirois said the key to beating FAU will be capitalizing on penalties.

“I know they’re a really good team, and so are we,” said Sirois. “I think the penalty kill and the power play will be huge going down there. If we stay disciplined and get opportunities on the power play and create some goals, we have a chance to come back with two [wins].”

Bobby Law said the key to winning is to carry the momentum into the next week.

“I think it starts in practice,” said Lawrence. “We just have to make sure that we take this energy, bring it on Monday and then kinda go from there.”

The Gamecocks only have four more games left in 2021, but they can still take the lead in the SECHC before they take a break in December.

Gamecock Hockey was founded in 2001, and Coach Sirois has been in charge of the team since 2015. The team is looking to win their first ever conference title. 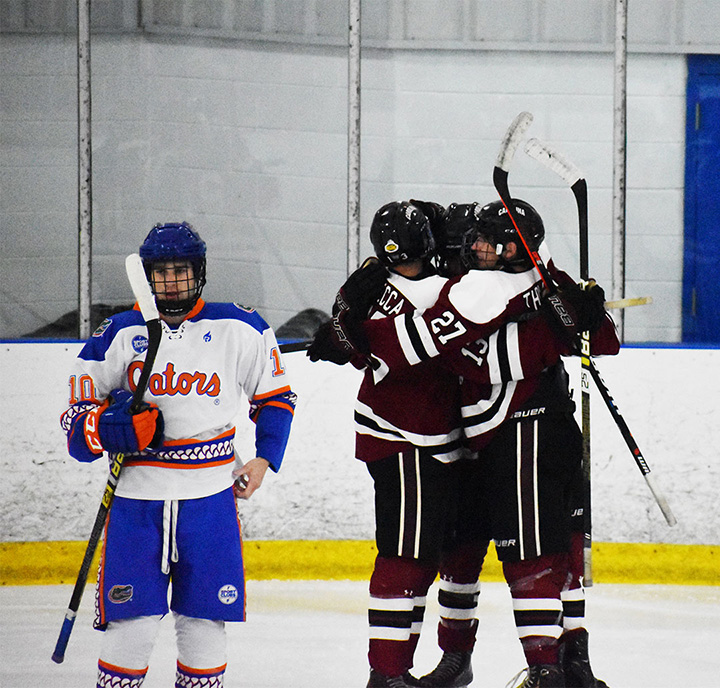 Forward Owen Thomas scored one goal against Florida and is currently leading all Gamecocks with eight goals. 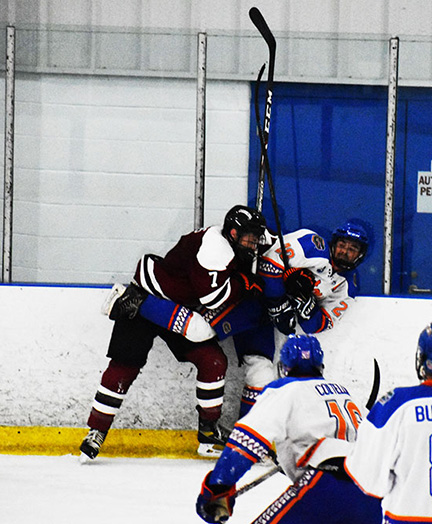 The Gamecocks committed ten penalties against Florida, a result of the physicality of both teams. Left Winger Josh Wilkins finished with one penalty and is tied for third on the team in penalty minutes. 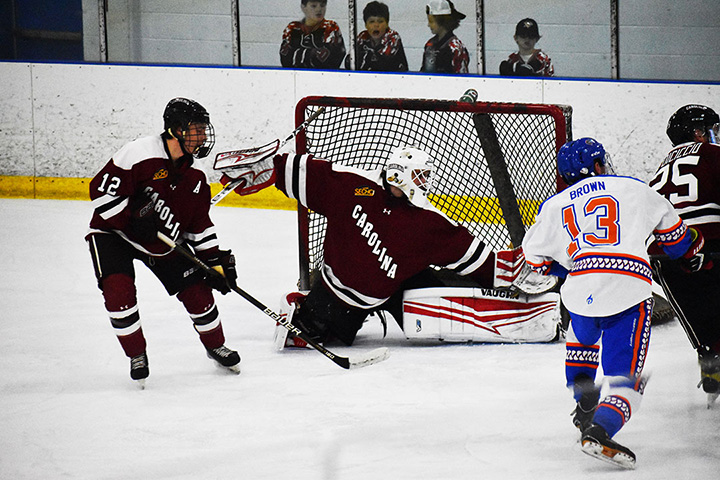 Starting goalie Trip Russell made 23 saves on 25 shots and currently has a 0.741 save percentage on the year. Russell’s 0.92 save percentage against Florida was his season high. 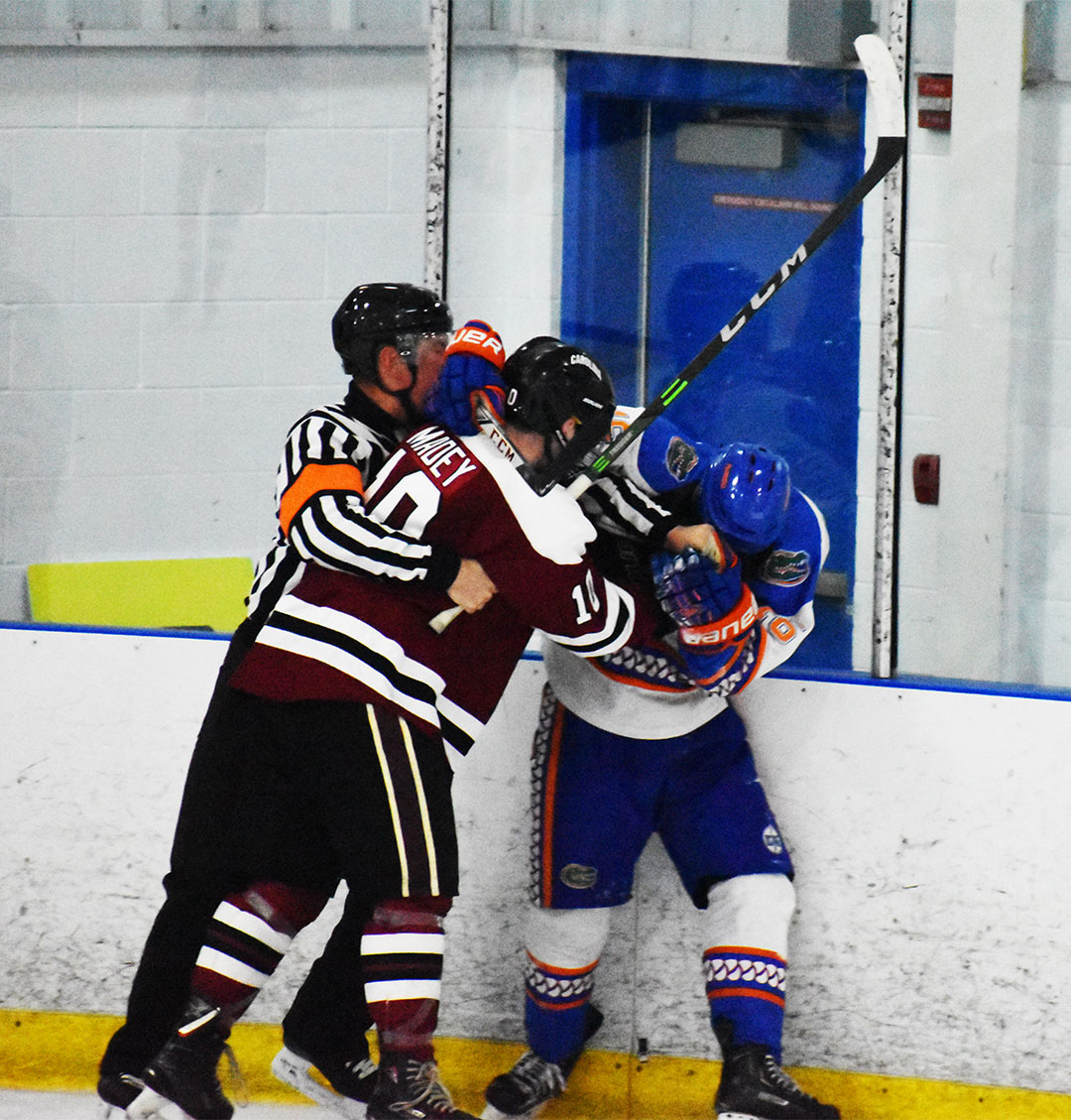 Center Noah Madey was ejected from the game after fighting with a Florida player. It was his second misconduct penalty in the game. He is currently second on the team with 12 penalty minutes. 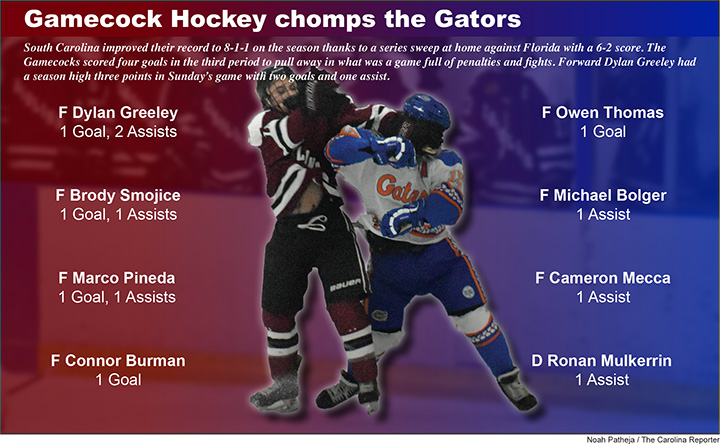