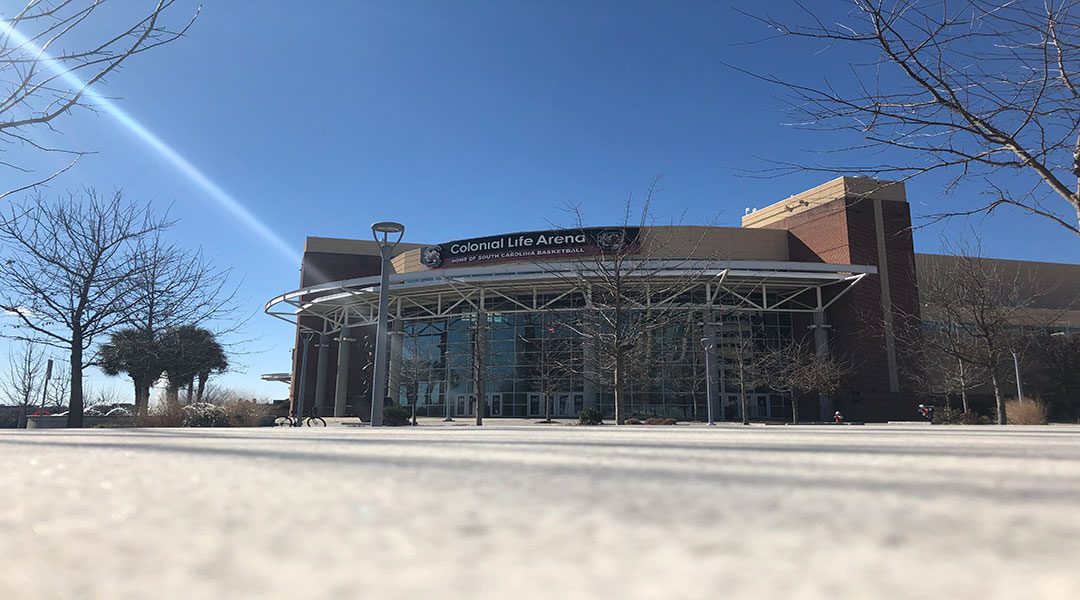 South Carolina men’s basketball is 3-4 at Colonial Life Arena this season where capacity is reduced to a few hundred due to the COVID-19 pandemic. Photo by Brandon Alter

South Carolina men’s basketball has had a rough season, both on and off the court. The team sits at 5-9 (3-7 SEC) and has had two stoppages due to COVID-19.

The Gamecocks have not played the fewest conference games in the SEC – that dubious honor goes to Texas A&M – but with just 14 games total, they have played the least games overall in the conference. At this time last season, they had played 25 games.

Since pausing in early January, the team has won two of the nine games it has played. The team has lost its last three games, all at home.

Head coach Frank Martin doesn’t think the COVID pauses have anything to do with how the team is playing now.

“We’ve been going now — this is week four, where we’re going [on] a consistent basis,” Martin said.

While the team has been able to consistently play and practice of late, the lost time early in the season for the team to gel can’t be made up.

“We just haven’t been playing as a team for these past couple of games,” forward Keyshawn Bryant said after the team’s most recent loss to Ole Miss.

The most prominent example of this was at the end of the game against No. 11 Alabama.

With the Gamecocks down three with four seconds left, Martin called timeout to draw up a play. Rather than running the play that had three different options for a shot, Jermaine Cousinard inbounded the ball to Justin Minaya for a quick layup.

“What I mean by not playing as a team, I just mean not listening to certain plays called by the coach,” Bryant said. “[We’re] just not executing things we’re supposed to be and not helping each other on the defensive end.”

In a poll done on Twitter by SportsTalk Media Network, the question of “Gamecocks likely to miss NCAA Tournament this season. What’s your view of Frank Martin’s job performance?” Of the more than 700 votes, 47% say “his worst, I’m concerned” and 32% say “COVID… he gets a pass” as of Tuesday afternoon.

South Carolina has shown flashes this season, and with five games left on its regular season schedule plus the SEC Tournament, the team could try and make a run at the postseason. That begins on Wednesday when they travel to Knoxville to face No. 19 Tennessee.

“Never put your head down. Still got a few games to go,” Bryant said. “You can always turn it around. Just got to come together as a team and figure out if that’s what we want to do as a team.”

If the team falls short of the postseason, — the Gamecocks have not made the NCAA Tournament since the Final Four run in 2017 — Martin wants fans to look at the track record of the past eight season, and recognize how different this year is.

“It’s a crazy year. I wish I could give someone an explanation as to why this has happened,” Martin said. “If people are going to be concerned about our inability to win games this year, then ‘Wow’ would be my answer. I don’t know how this particular year can be highlighted in different ways than all the years prior to this.” 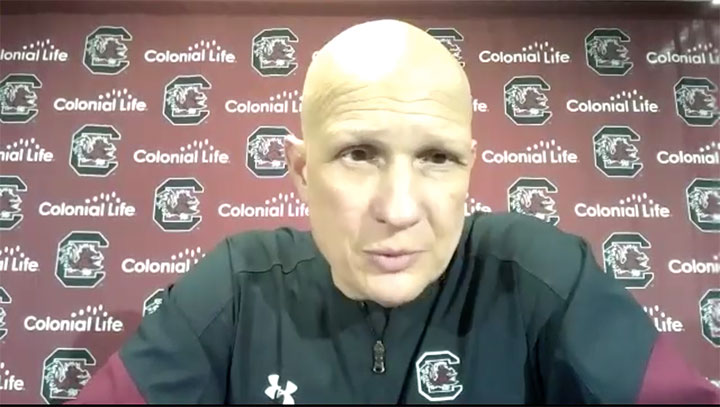 Frank Martin is in his 9th season as the Gamecocks’ head coach. Photo by Brandon Alter