Gamecocks ready to “pour our guts” into Florida 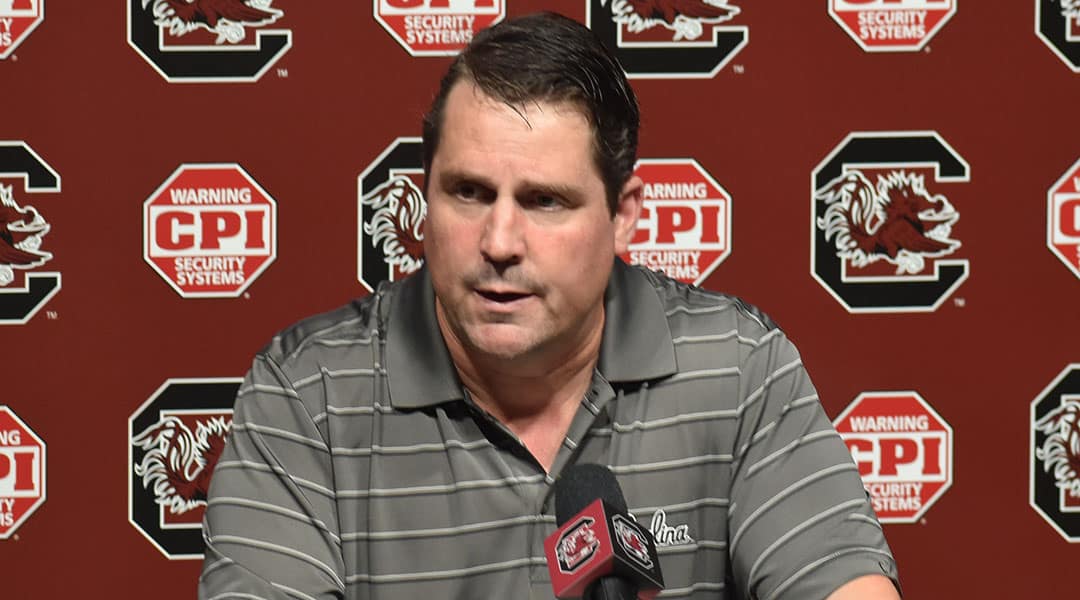 Will Muschamp speaks about carrying momentum from South Carolina’s upset of third ranked Georgia into another matchup against a top 10 opponent.

After one of the most dramatic upsets in Gamecocks history, the South Carolina football team looks to carry that momentum into another matchup against a top 10 team Saturday. The Florida Gators will come to Columbia ranked No. 9 in the country.

“Every week is a season here,” head coach Will Muschamp said. “We’re going to pour our guts into Florida and hopefully create the opportunity to deserve, to have the right to win on game day.”

The unranked Gamecocks shocked the college football world last week by beating the No. 3 Georgia Bulldogs in two overtime periods. Players said they celebrated and have moved on.

“I think as a message from the seniors on down, guys understand we need to go into the rest of this week and prepare for the game we have coming up,” senior linebacker T.J. Brunson said.

Sophomore linebacker and leading tackler Ernest Jones led the team in total tackles for the fourth time this season last Saturday with 12. Jones is from Waycross, Georgia, and said last week feltspecial.

“It’s been fun, but I’m over with it now. Some of my friends, they’re Georgia fans, so they’re still stuck on it, but we won, so it doesn’t matter to me anymore,” Jones said. “We’re gonna move on to Florida.”

Jones said he and his teammates are excited about the opportunity to try to take down another one of the nation’s top football teams.

“I’m already ready for Florida,” Jones said. “I love the feeling of winning, of big games and such. I want that feeling again.”

Florida has been using two quarterbacks since the loss of its first-string quarterback Feleipe Franks early this season. Kyle Trask will be the Florida starter this week, but the Gamecocks can expect Emory Jones to take snaps as well.

Gamecocks star defensive tackle Javon Kinlaw says his role on the defensive line won’t change depending on the quarterback.

“Just get in there, that’s my objective,” Kinlaw said.

Kinlaw recorded another sack last week in Athens to bring his sack total up to five on the season. Kinlaw is already being projected as a first-round NFL draft pick, but he said the only opinions and praise he cares about are the ones coming from within his team.

Muschamp called for South Carolina fans to be at Saturday’s game early and loud. He said fans make a difference at the games.

“Our fans, we’re expecting them to be jacked, ready to go Saturday. It’s gonna to be another really good game,” Jones said.

Saturday’s game is scheduled for noon, which caused the usual stir around campus and on social media. Students and fans love the opportunity for their team to play at night, but some players said playing at noon gives the team an advantage.

“I get too antsy for night games,” Smith said. “I don’t like to really wait; I like to go out there and go.”

“I like playing noon games; you wake up and it’s time for ball,” Ernest Jones said.

“We’re up every morning. All our guys are in the building at 6:30 and fired up about practice,” Muschamp said.

The game will be televised nationally on ESPN and can be heard on Sirius XM radio and 107.5 FM. 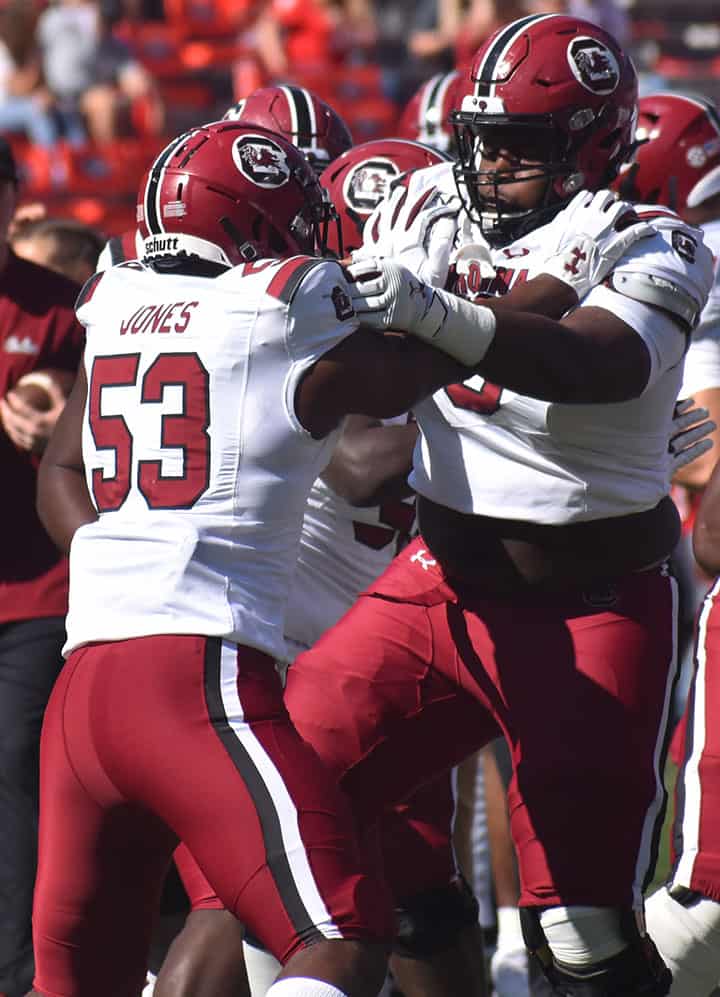 Sophomore Gamecock linebacker Ernest Jones leads the team in tackles for the 2019 season with 50 total tackles. Jones credited the Gamecock defensive line’s high level of play for creating opportunites for him to make plays this year. Credit: Nick Papadimas/Carolina News and Reporter 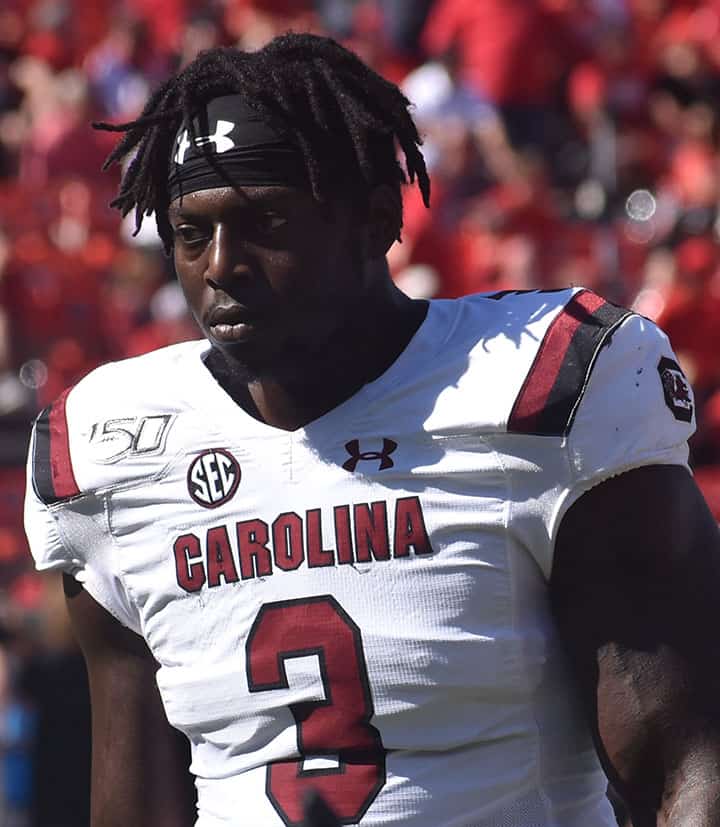 Javon Kinlaw now has five sacks on the season after the Gamecocks victory in Georgia. Kinlaw said that his job against Florida is to get in the back field, no matter who’s playing quarterback. Credit: Nick Papadimas 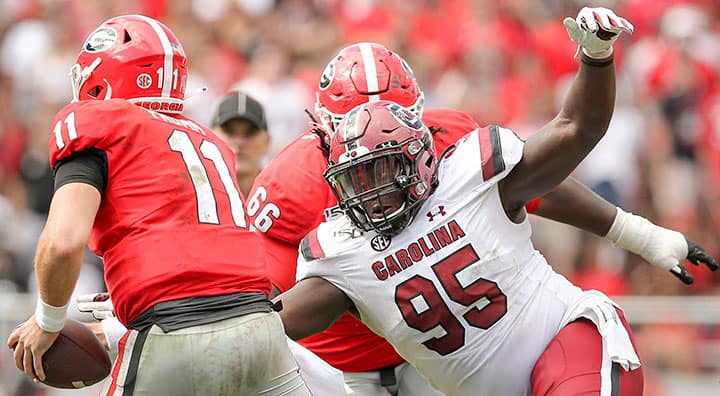 Defensive lineman Kobe Smith likes playing noon games.  The Gamecocks, unlike most football programs, practice in the mornings.  The team is at the practice facility by 6:30 a.m. every day.