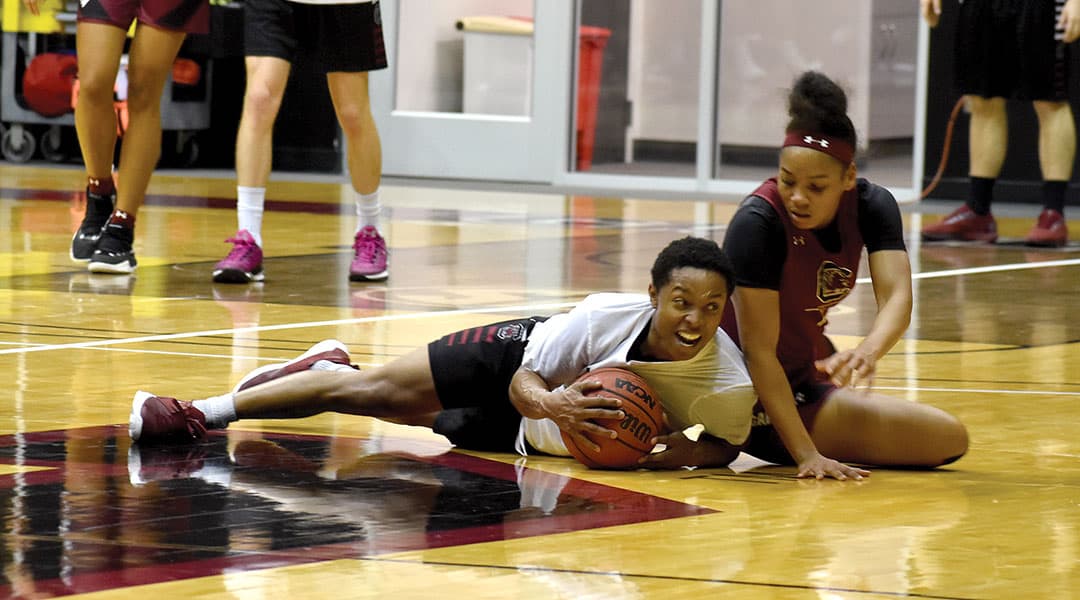 Walk into the women’s basketball practice facility on any weekday afternoon, and you may be surprised to find a game of co-ed basketball. The female players dodge, jump, and wrangle basketballs against a team of a dozen male competitors who work to make the team razor-edge competitive.

This game is not for sissies. The women’s basketball players, some 6 feet tall, muscular and intimidatingly agile, are not afraid to get physical. Nobody holds back.

The group of male students are the heart of the official practice squad for the Gamecocks women’s basketball team.  They practice with the team, eat meals with the team and support them courtside at their games.

“It’s such a rewarding experience to see that your work is appreciated and to see them execute and the things that we do in practice come to fruition. It’s one of the most euphoric feelings that I’ve ever felt,” said Jonathan Hampton, a senior on the practice squad.

Although the practice squad does not receive the same press, perks or student athlete recognition as the women, Head Coach Dawn Staley says they are just as much a part of the team as the coaches and players.

“They are super committed to it; they are competitive, they wanna beat us, they execute,” said Staley, who grew up playing against boys and young men.

Freddy Ready, the team’s director of player development, goes to on-campus gyms to watch free-play and intramural games. If he meets someone with potential, he invites them to try out for the practice team. Commitment is a necessity when the team is scouting new practice players.

“You have the responsibilities of an athlete without exactly being considered one. So there’s so much that you have to consider,” said Hampton.

Practice players are expected to be at every practice unless they have class. When scheduling classes for the next semester, they have to do their best to schedule around practice time. They are expected to stay in good shape and remember that they are a constant representation of Gamecocks basketball.

Although the guys are a part of the team, they are the opponents on the court. Before every practice, they review film from the upcoming opposing team. They study their plays and habits until they are able to execute them successfully. Every member of the practice team is expected to stay “in character” with whatever player from the opposite team that they are assigned to represent that day.

Kevin Lyons watched Staley and her team while he was in high school and admired their performance. Now he is a sophomore on the practice team and defends 6’5″ freshman forward Aliyah Boston.

When they’re not battling it out on the court, the practice squad watches the games courtside, serving as armchair coaches.  Lyons has been at every home game so far this season.

“In one sense, you know, we’re not on the court and we may not get all this stuff that the athletes get, but we’re still part of something,” said Lyons. “We get to be in the great facilities all the time, get fed, and I know the people around me know that I want to coach so they know how important it is for me to be around great coaches and great players.”

Jacob Coltrane was a practice player for three years, “the most fun three years of his life.”

Now he’s in a UofSC master’s program and works as a graduate assistant for the team. He hopes to coach basketball and has formed strong relationships with Staley and the rest of the coaching staff.

“You have to realize you have to have a little bit of humility and know that you’re here for them to get better.” 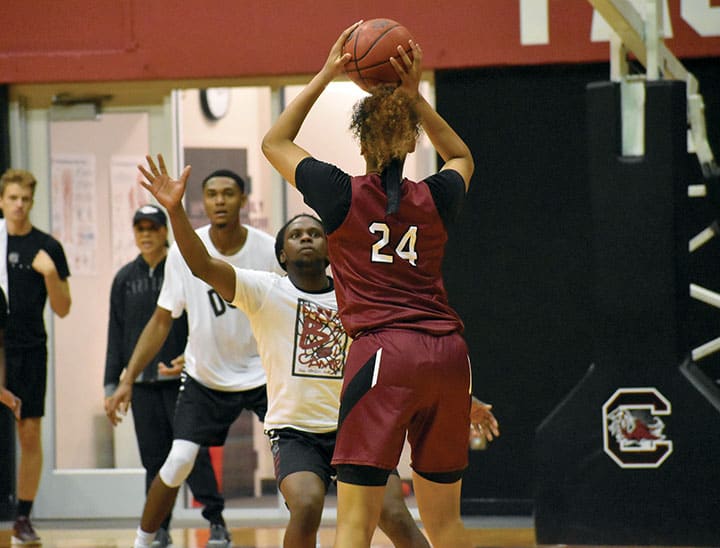 6’2″ guard/forward Lele Grisset towers over practice player Jonathan Hampton. It’s not uncommon for the women to have more height and weight on the men. 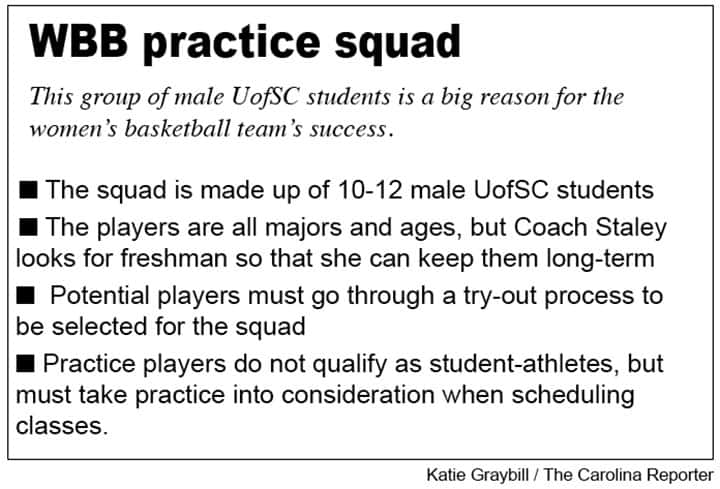 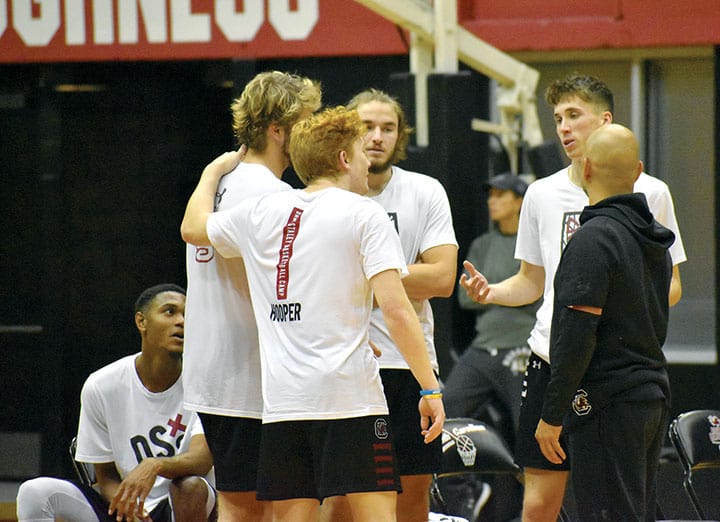 The group of male students who serve as the Gamecocks women’s basketball team practice squad received rings when the women won the 2017 National Championship. 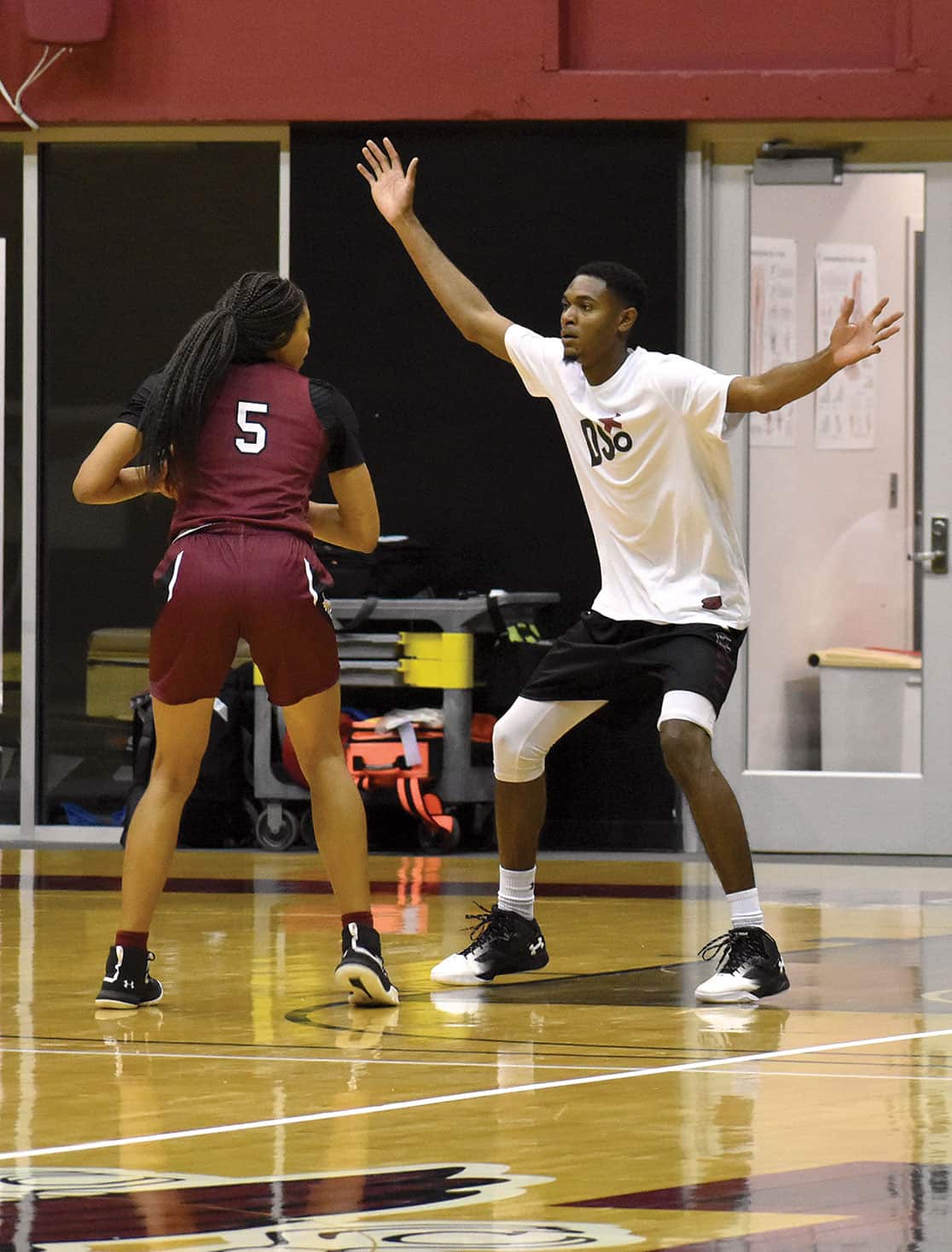 Practice players are expected to work just as hard as the women on the team, even though they are not technically student-athletes. 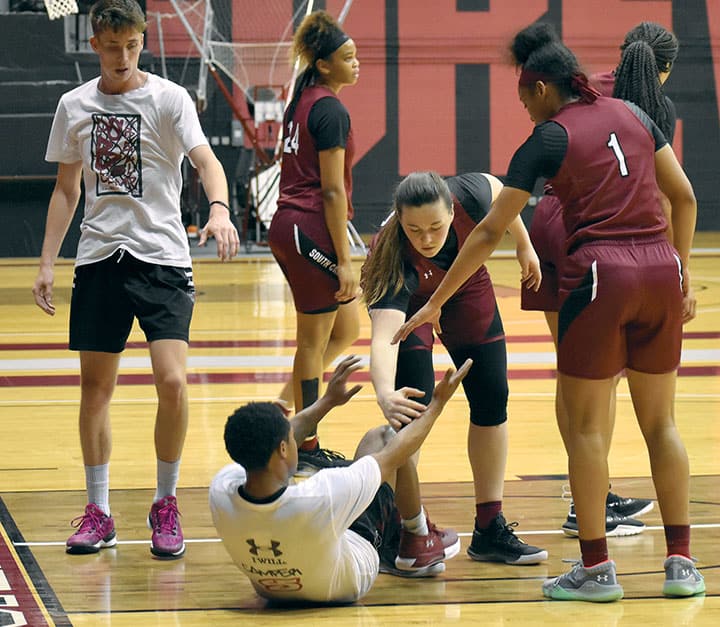 Although they are opponents on the court, Head Coach Dawn Staley says that the practice squad is just as much a part of the team as the players and coaches.