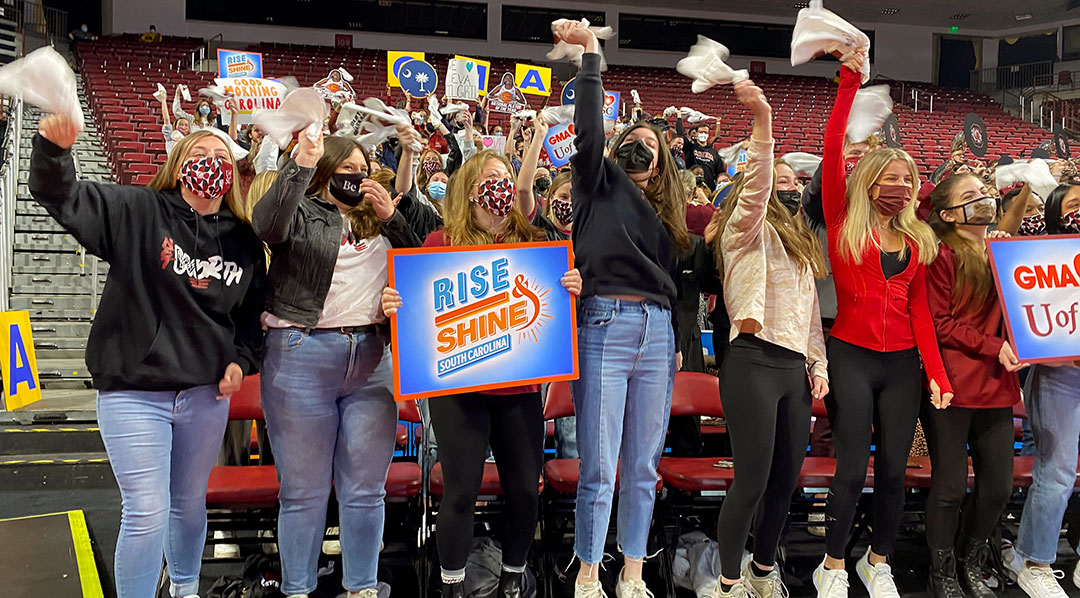 Students at the University of South Carolina cheer during filming for “Rise & Shine,” a Good Morning America series highlighting culture across the U.S. Photos by Caroline Williamson.

The Colonial Life Arena was the latest stop in “Good Morning America’s countrywide series “Rise and Shine” on Tuesday. The series highlights cultural resilience in each state and aims to “inject positivity” in the midst of a global crisis.

The “Rise and Shine” segment in Columbia was hosted by ABC weekend anchor Eva Pilgrim and national correspondent Kenneth Moton, alumni of the University of South Carolina. The pair, who worked together during their Senior Semester capstone program, reported on Gullah culture in the Lowcountry and a report on how the state was bouncing back after the pandemic.

“The last time Kenneth and I were going to Colonial Life together was on graduation day,” said Pilgrim. “We were laughing about the fact that that was the moment we walked across the stage to start with. And it’s cool to be back here together with people that are all friends.”

The segment featured the University of South Carolina Women’s Basketball team and Head Coach Dawn Staley, who has gained prominence for her coaching style and as an ambassador for the university and the state.

Led by superstar Aaliyah Boston, the women’s basketball team ended the regular season with a 29-2 record. On average, they outlasted their opponents by nearly 20 points per game. The women’s team brought South Carolina their first National Championship in 2017 and have been pushing for excellence since then. The team is a number one overall seed in the first ever NCAA Women’s March Madness which opens this week.

The Women’s Basketball team in the Midlands is a template of a successful game plan and a passionate fanbase, with an average of 870,000 viewers from the Tennessee Volunteers game earlier in the year on ESPN.

“I think they are the most incredible squad we have ever seen in women’s college basketball sport,” Moton said. “I mean, I’m a little biased. But I think what this program has done for not only this university, but for the state of South Carolina is just incredible.”

Staley has been working to improve the program since she was hired, over a dozen years ago. Pilgrim said her “direct and poignant” coaching style is highly sought-after, especially after coaching the 2020 U.S. Olympic team to a gold medal.

Not only does Staley have a game plan, she’s a voice for the underrepresented: Black people and female athletes. Dawn Staley is passionate for advocating the investment of female athletics. 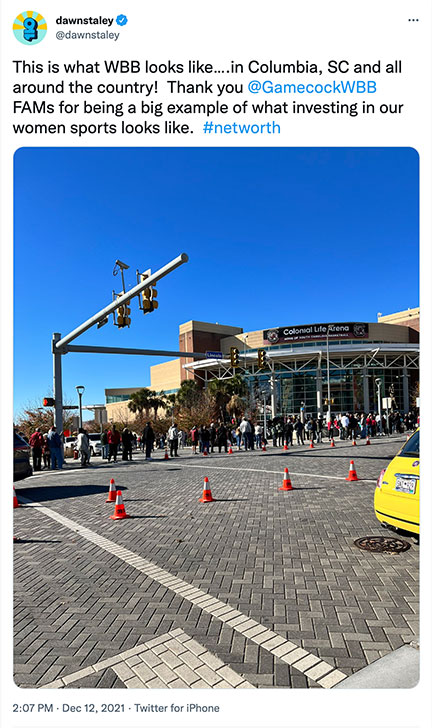 Staley has always been an enthusiastic supporter of Black coaches. After the Gamecocks 2017 National Championship title, she sent pieces of the net to 70 black female coaches. One of the coaches included Carolyn Peck, the first Black woman to win a national championship when she was at Purdue University, who had given Staley a piece of the net when she won the title at the turn of the century.

“She’s building a bond, creating the bridge to create something wider,” said Pilgrim.

Alongside her impressive career coaching, Staley volunteers with the Richland County Sheriff’s Department. As an honorary deputy, Staley has a close relationship with Sheriff Leon Lott and uses that relationship to be more in touch with today’s youth. Lott was featured in the Good Morning America segment.

“She has this ability to sort of bring people together that is very natural, and really special,” Pilgrim said. 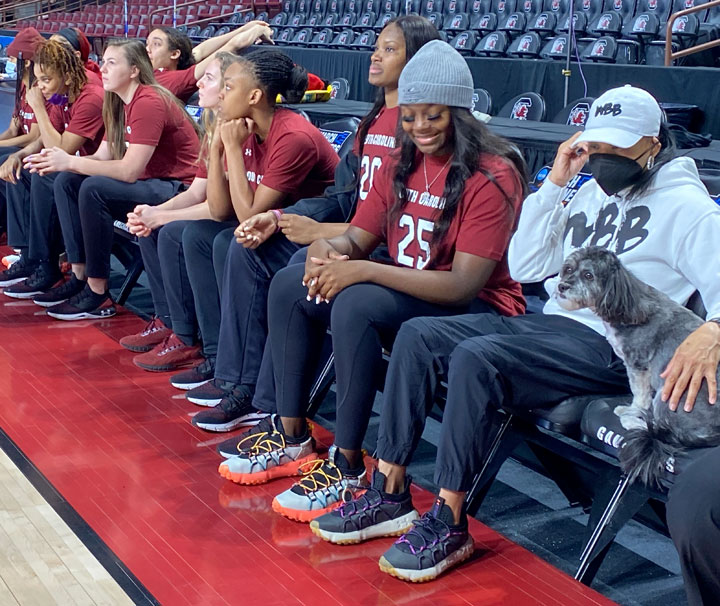 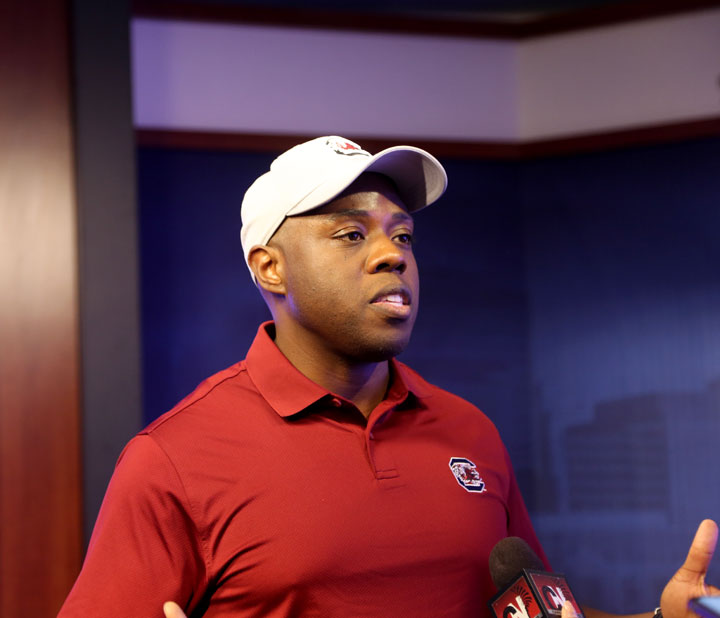 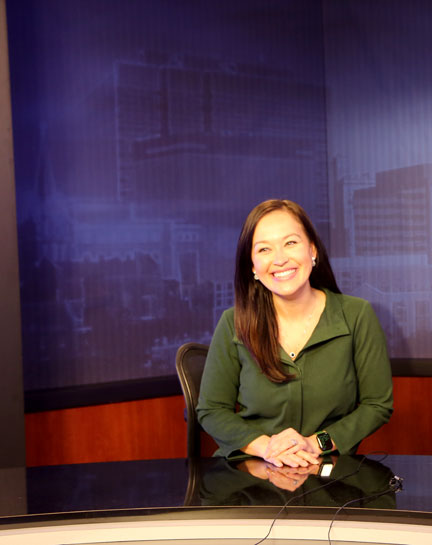 ABC’s national correspondent Kenneth Moton and weekend anchor Eva Pilgrim return to the School of Journalism and Mass Communications for the filming of “Rise and Shine.” 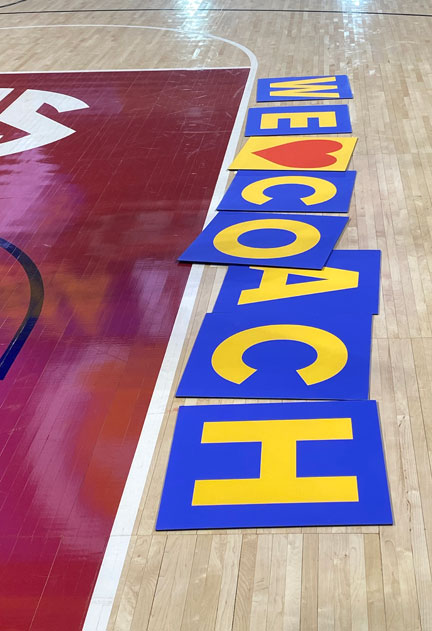 Josh Matthews is an aspiring entertainment and sports reporter from the low-country of South Carolina. He has been an intern reporter at ColaDaily and a journalist for The Cultured Nerd and The Spurs Up Show. He also has marketing experience as an intern at Bleav Podcast Network and the Post and Courier. Sources confirm he’s a pretty cool dude though.