Holy Trinity Greek Orthodox Church members work alongside the set-up crew as they prepare for the festival this weekend.

Niki Stewart and her crew spent their day making over 10,000 dolmades: meat and rice wrapped in baked grape leaves, topped with a “delicious” lemon sauce.

Stewart, the head general chair for Columbia’s annual Greek festival, was hustling with other members of the Holy Trinity Greek Orthodox Church to gear up for the event.

The festival only lasts for a few days every year, but church folks like Stewart spend much more time prepping for it.

“They marinated 6,000 chickens this morning,” Stewart said on Tuesday.

That chicken, which comes out to about 6,800 pounds, along with 950 pounds of shrimp, is just a start, she said.

Workers from Whaley Food Service and Lakeshow Electrical Service worked diligently on Tuesday in the heat of the church parking lot, setting up tents and grills for the festival, which will begin on Thursday.

The event has grown significantly in its 32 years.

“When I first started doing the festival we had one little, tiny half of a freezer truck we used to rent from Coca-Cola to put some of the products on,” Stewart said, “and now I have seven big rigs all the way around the block.”

Next to the main church building is a smaller building with a kitchen to prepare the weekend’s lunches and dinners, and a gym decked out with tables, chairs and booths for Greek pastries.

Through the gym and back out into the lot, there will be at least 25 vendors from outside the church selling items like traditional Greek clothes and jewelry.

One of the vendors, Maria Charalambides, walked into the church on Tuesday with her husband so they could get started setting up “Maria’s Jewelry.”

Charalambides said she is probably going to be the only vendor that will be inside instead of out in the lot, but she might have earned that right.

“I think I [am] the original vendor … for this festival, ever since they started,” she said.

Steve Bitzas, the festival set-up coordinator, sat at a table in the gym for a short break from his work building the taverna and beverage areas and Greek grocery station.

“You need to come when it’s cranked up,” Bitzas said. “It’s like sardines in here.”

Aside from the food, those who work to make the Greek Festival happen aim to bring people together in a cultural embrace—it’s about being “Greek for a week.”

That’s more than just a rhyme to the Rev. Michael Platanis.

“I think the important thing is not only to be Greek for a week, but to be Greek forever … In order to be Greek, there is only one thing to do, and that is to love what is Greek,” Platanis said, citing an ancient Greek politician.

Platanis stood in the church’s sanctuary as a professor from Greece and a team of iconographers quietly painted religious art on the walls and the dome.

He reflected on the history of the church and the Greek Orthodox culture, and he decided that “Greek” is more a culture of hospitality than a race of people.

The festival becomes a reflection of that idea as it welcomes people to take part in a way of life.

About 11,000 strangers came to see the church and the sanctuary’s artwork when it was first started about six years ago, Platanis said, many of them even skipping out on the festival’s food and music to do so.

This year’s event is going to include self-guided tours of the cathedral, as well as a history lesson courtesy of a Greco-Persian wars battle reenactment.

The church typically donates much of the festival’s proceeds to charities and non-profits such as the American Red Cross, the Juvenile Diabetes Research Foundation and summer camps for children undergoing chemotherapy, Platanis said.

Stewart is also in charge of getting sponsors for the festival, which she says takes all year.

The work put into the festival, Platanis hopes, will simply result in a weekend of peace.

“To create a place … where someone’s not looking over their shoulder, where someone is not thinking ill, where someone is simply satisfied in such a way that they’re not worried or scared or wanting something more,” Platanis said, “that’s a unique thing about the festival.”

The parking lot was still sort of bare, with no discernable theme. There was no food to be eaten yet, and no music to be heard.

But Sidney Smith continued to help set up tents and electrical equipment, looking to the near future with excitement.

“It ain’t gonna look nothing like this,” Smith said. “Come at nighttime, when all the lights be on … It’s really nice.” 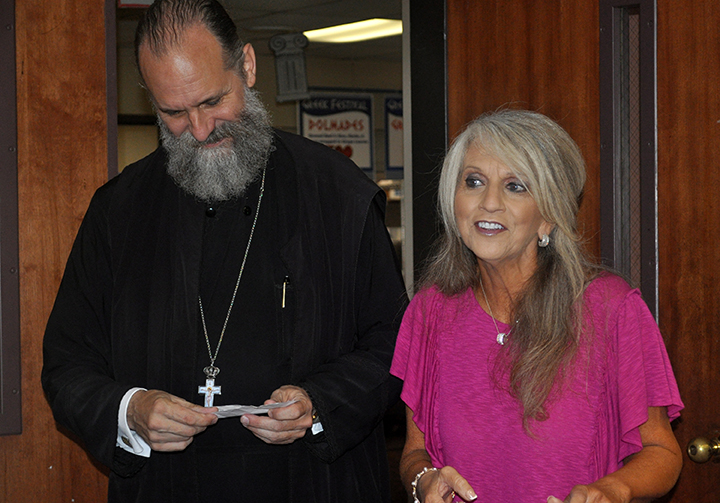 Rev. Michael Platanis of Holy Trinity Greek Orthodox Church and Niki Stewart, Head General Chair of the 32nd Annual Greek Festival, oversee the set-up and preparations of the festival. Stewart says she and her team handle “everything from the first knife and spoon to the last piece of meat.” 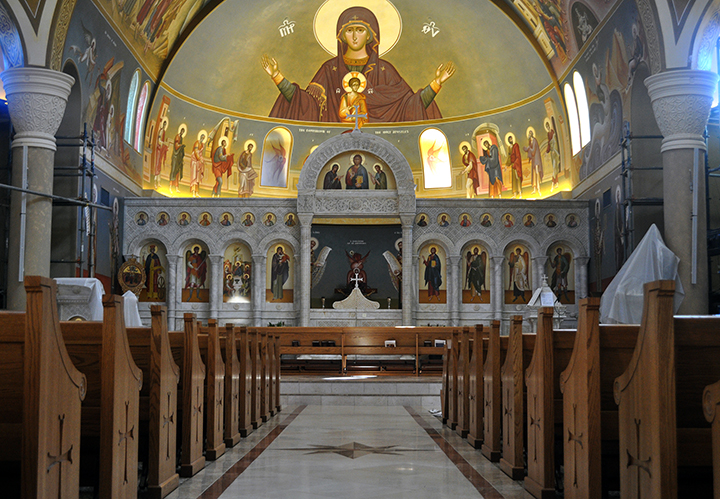 The Holy Trinity Greek Orthodox Church has hosted their Annual Greek Festival for the past 32 years. As part of the festivities, the church offers tours to see this unique cathedral. 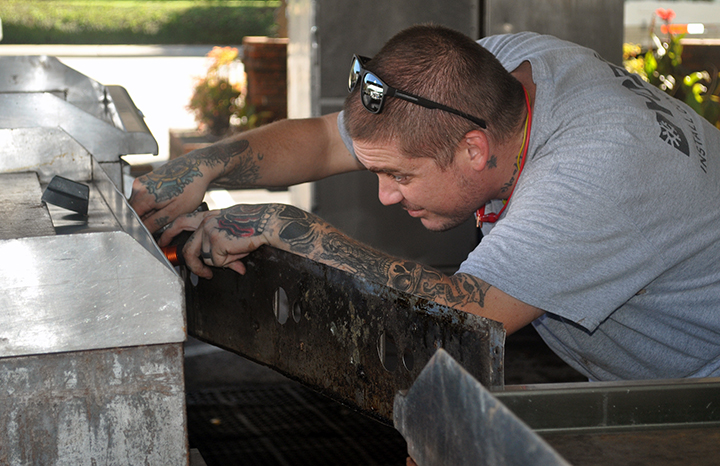 Michael Jordan, a Whaley Food Services employee, sets up a grill for the 32nd Annual Greek Festival that begins Thursday. Set-up of tents and booths have begun at the Holy Trinity Greek Orthodox Church. 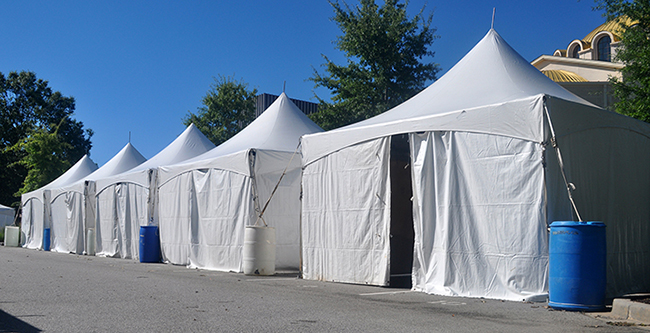 Tents at the Holy Trinity Greek Orthodox Church sit empty, awaiting the 26 vendors that will take over this weekend for the 32nd Annual Greek Festival. Vendors bring a variety of goods, including food, jewelry, and clothing, to the church parking lot for this 4 day event.