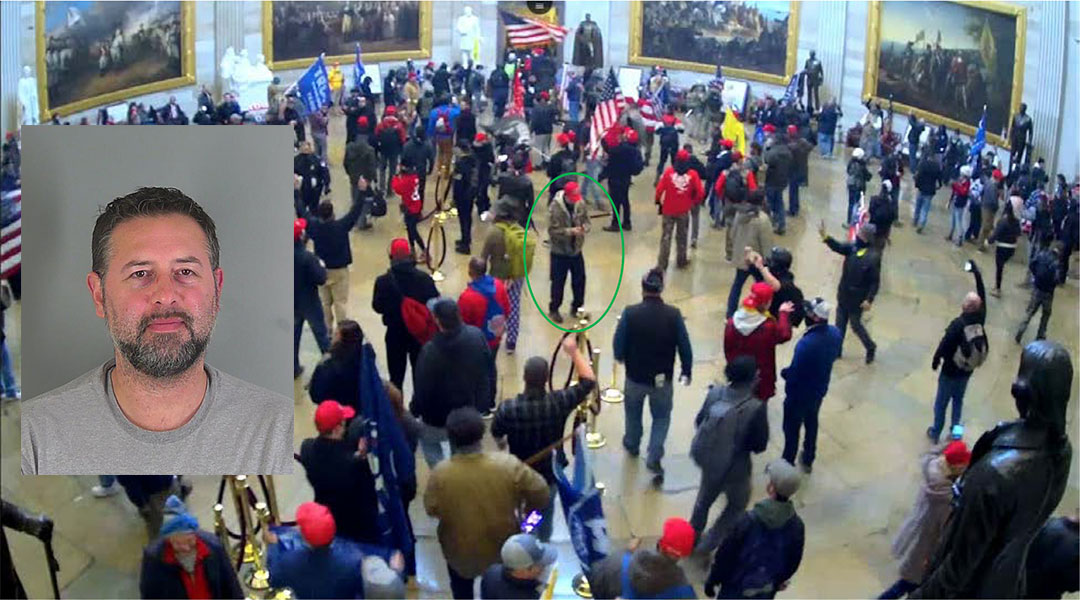 Robert Norwood’s mugshot is pictured over surveillance footage that shows he was in the Capitol Rotunda at 2: 46 p.m. Jan. 6.

A Jan. 19 dinner conversation between two friends took a shocking turn after one person — known only as “T. D.” — shared that a brother took part in the Jan. 6 insurrection of the U.S. Capitol Building.

The other dinner partner shared that information with the FBI, who then interviewed T.D. and garnered enough evidence to charge the brother, William Robert Norwood III of Greer.

Norwood was arrested Feb. 25 and faces four charges. Those include entering a restricted building without lawful authority, violent/disorderly conduct on Capitol Grounds, obstruction of justice/Congress and theft of government property.

According to the FBI affidavit, T.D. shared that the brother claimed to do “terrible things” inside the U.S. Capitol. Text messages from Norwood’s phone show he claimed to assault four law enforcement officers, steal a helmet and a tactical vest from Capitol police during the riot.

On Jan. 22, Norwood agreed to waive his Miranda rights in an interview with the FBI. The interview reflected a vastly different picture than his boastful texts would lead on.

Norwood claimed that any statements he made in text messages were meant to make himself sound tough. He also repeatedly claimed that he only attempted to help law enforcement, not hurt them.

Norwood alleged that after leaving the Capitol building, an unknown person took a police vest that was lying on the ground outside and put it on him. He also admitted to pulling a police helmet from a pile of equipment from inside the Capitol.

Finally, Norwood claimed that upon leaving the Capitol grounds he reunited with his wife, who had gotten separated from him during the riots. They met an older couple from Ohio who invited them to stay in their hotel room at a Hampton Inn close by for the night. Norwood claimed that he left the police vest and helmet inside the hotel room, but he could not recall any further details to interviewing agents.

The FBI said in court on March 2 the vest and helmet were recovered in South Carolina. The court also denied Norwood the right to post bail because Norwood had proven to be a risk to public safety, according to Norwood’s defense.

The next day, the court issued an order of commitment to another district. This requires that the U.S. marshals transport Norwood to the District of Columbia for the resolution of the case.

While the identity of the FBI informant T.D. is unclear, the affidavit acknowledges that Norwood was that person’s brother. At the detention hearing March 2 Norwood’s sister testified that she received the messages from her brother, according to Norwood’s defense.

“Way ahead of you. I’m dressing in all black. I’ll look just like ANTIFA … I’ll get away with anything,” Norwood said through a text message on Jan. 5.

Antifa, a contraction for anti-fascists, is an umbrella description for the far-left-leaning militant groups that resist neo-Nazis and white supremacists at demonstrations and other events.

According to a Jan. 6 Verizon search warrant, the cellphone number allegedly belonging to Norwood was identified as having utilized a cell site which includes the interior of the U.S. Capitol building.

The first text he sent to the group since announcing his plans was sent Jan. 7 at 9:08 a.m. after the riots had taken place.

“It worked… I got away with things that others were shot and arrested for,” Norwood said.

Other evidence mounted against Norwood includes video surveillance from inside Rotunda of the Capitol building, the document said.

One image, within the texts provided in the affidavit, shows what appears to be Norwood with a police vest underneath the camo jacket he donned Jan. 6.

The arresting agent confirmed that the vest pictured is consistent with the vests worn by Capitol Police Jan. 6.

“The cop shot a female Trump supporter. Then allowed ‘ANTIFA Trump supporters’ to assault him,” a text message from Norwood on Jan. 7 said. “I was one of them. I was there. I took his [vest].”

Later that day, Norwood’s family member attempted to confront his account through a text chat,  but did not come forward with that information to authorities until 13 days after the deadly riot at the Capitol building which took five lives. Had the dinner partner not came forward, it is unclear if the evidence needed to charge Norwood would have ever gotten out.

“Robbie literally bragged about pretending to be this Antifa yall go on and on about, and then you say no no REAL antifa did this,” a message sent from T.D. Jan. 7 said. 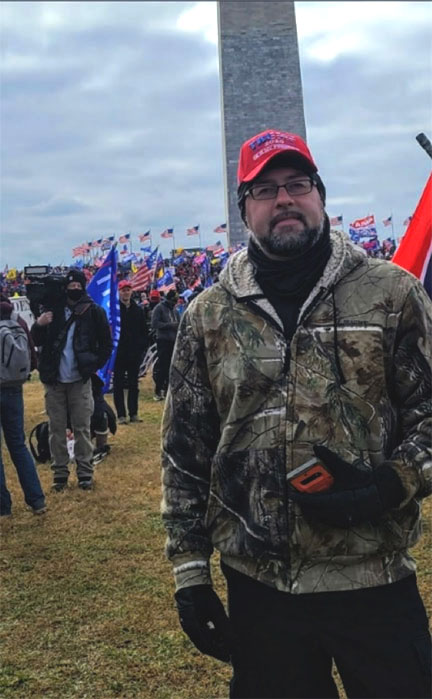 The affidavit used this image of Norwood from the mourning of the Capitol riots to identify him in surveillance footage based upon what he is wearing. 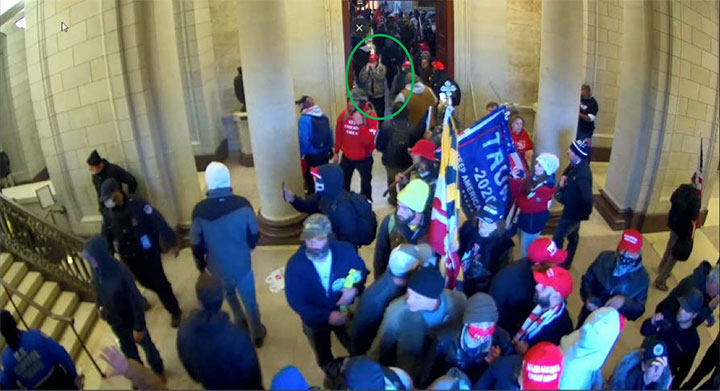 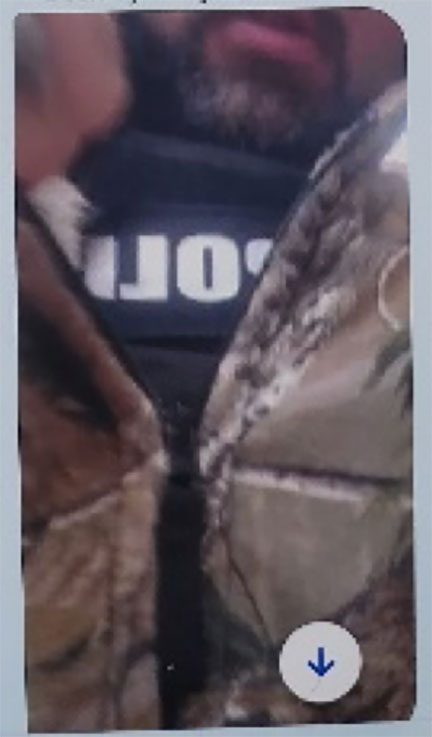 Texts from Norwood’s phone show he sent this picture wearing the stolen police vest along with a message saying “He deserved worse.”