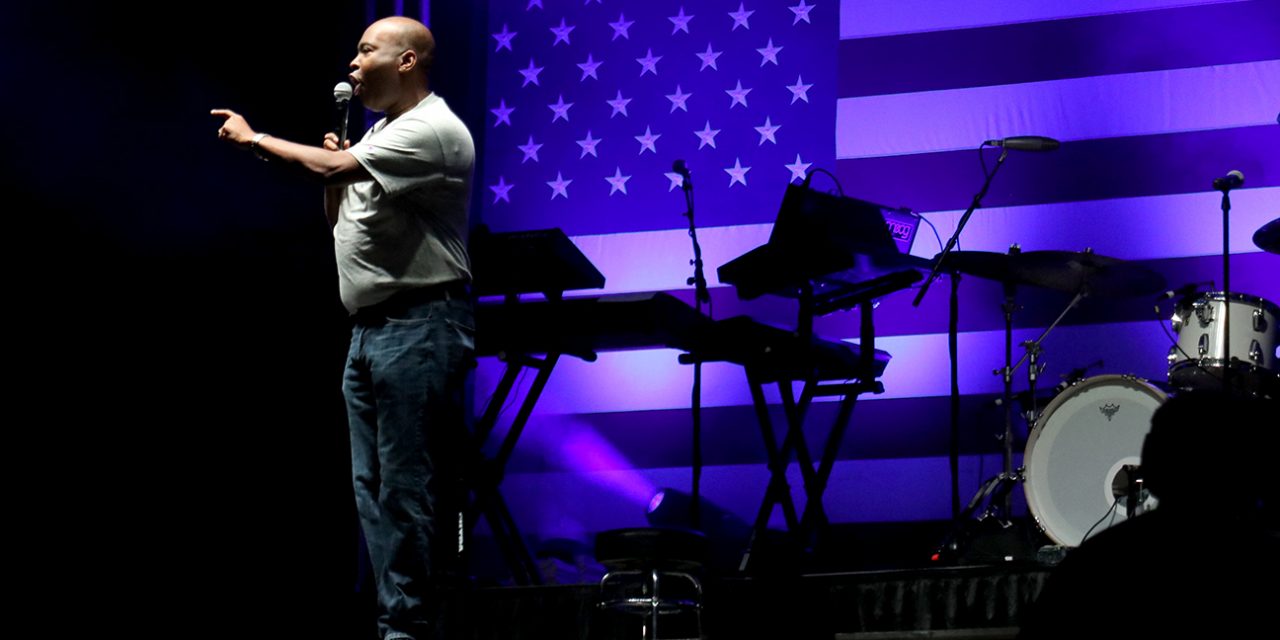 Democratic U.S. Senate nominee Jaime Harrison speaks to the crowd in cars at a drive-in concert at Benedict College and encourages them to get out in vote. Photo credit: Andrea Betancourt

With only a week until Election Day, Democratic U.S. Senate candidate Jaime Harrison teamed up Monday with the rapper Common to encourage people to vote.

“We will live up to the motto in South Carolina: “While I breathe, I hope.” For the next eight days, I’m going to change our motto a little bit,” Harrison said.

Hosted at Benedict College, the drive-in “Get out to Vote” event filled the football field and beyond with parked cars and signs of support for the drive-in concert.

Supporters faced a few questions upon arrival surrounding COVID-19 symptoms, wearing masks and staying inside of their vehicles at all times.

Before the concert began, Columbia Mayor Steve Benjamin spoke about the importance of getting out to vote.

“We need to encourage people to show up and make sure that we preserve this earth and give our children the opportunity to live up to their God-given potential,” Benjamin said. “We can only do it if we show up and show up in record numbers. November 3rd we need to shock the world and send Jaime Harrison to Washington, D.C.”

Performances by Christou DaKeeng, Jeffrey Lampkins and the Young, Gifted and Blessed Gospel Choir kept the crowd honking in enjoyment.

Before closing out the show, Common got the crowd to flash their headlights and honk their horns one last time and spoke in support of Harrison.

“I want to make sure all of you go out and spread the word to everybody about Jaime Harrison and make sure everybody is voting. Up and down that ticket, South Carolina,” Common said.

Harrison and his opponent, U.S. Sen. Lindsey Graham, have agreed to their second and final debate this Friday at 7 p.m. 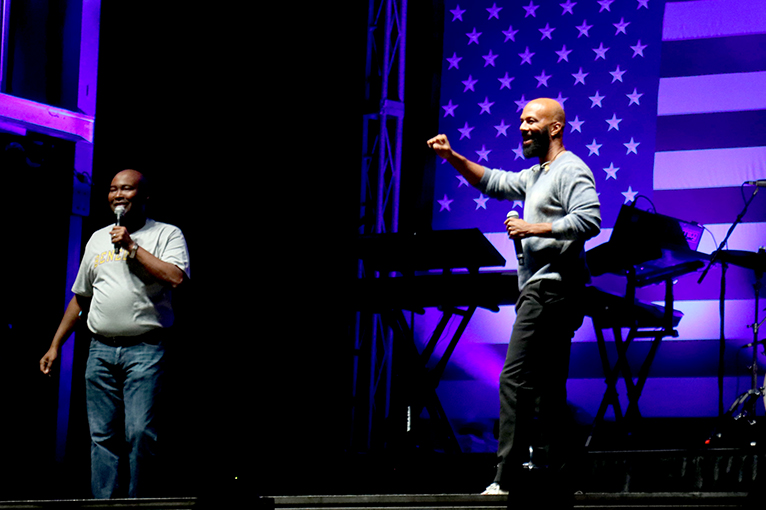 Democratic nominee for Senate Jaime Harrison and rapper Common on stage at Harrison’s drive-in ‘Get Out to Vote’ rally Monday night.

Jaime Harrison’s tour bus parked outside of Benedict College’s Charlie W. Johnson Stadium, next to the stage at the rally. 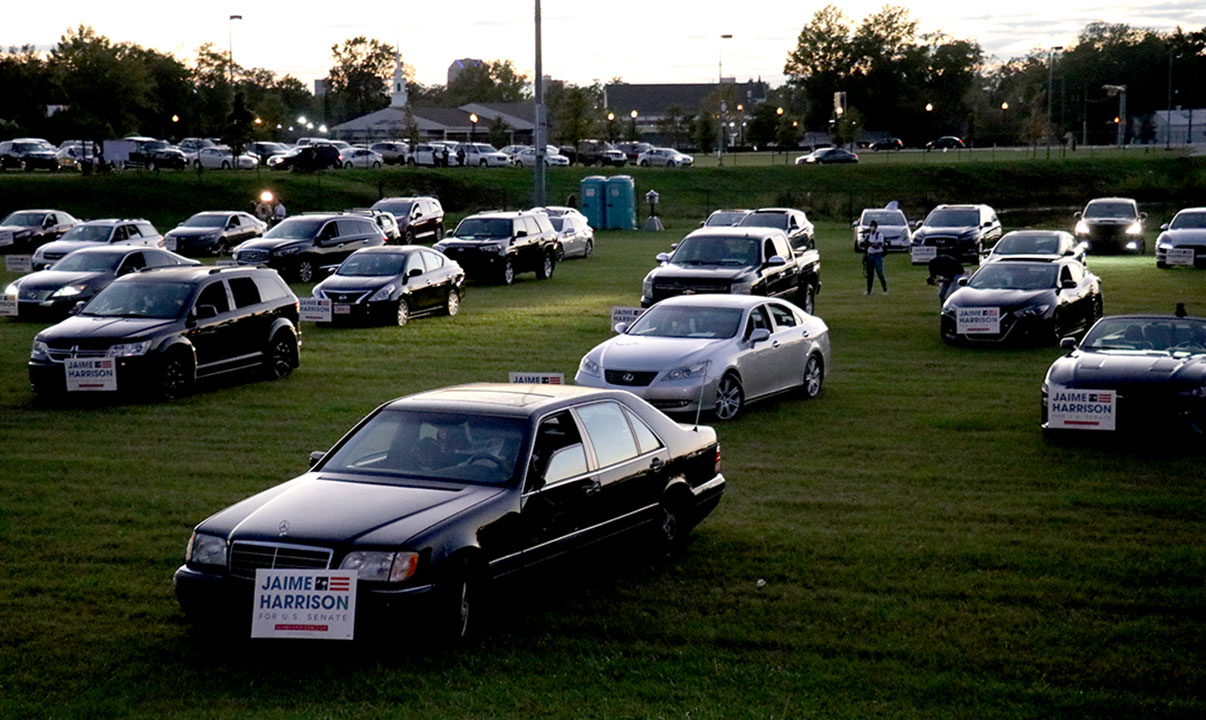 The cars lined up and social-distanced during the drive-in concert. 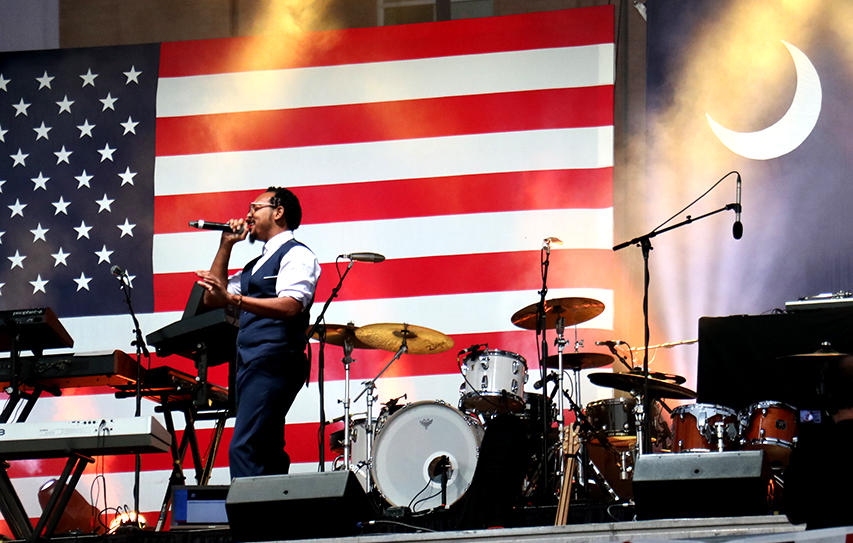 Christou DaKeeng was one of the opening acts for Common at Harrison’s drive-in rally.