Hazing can sometimes be invisible – and deadly 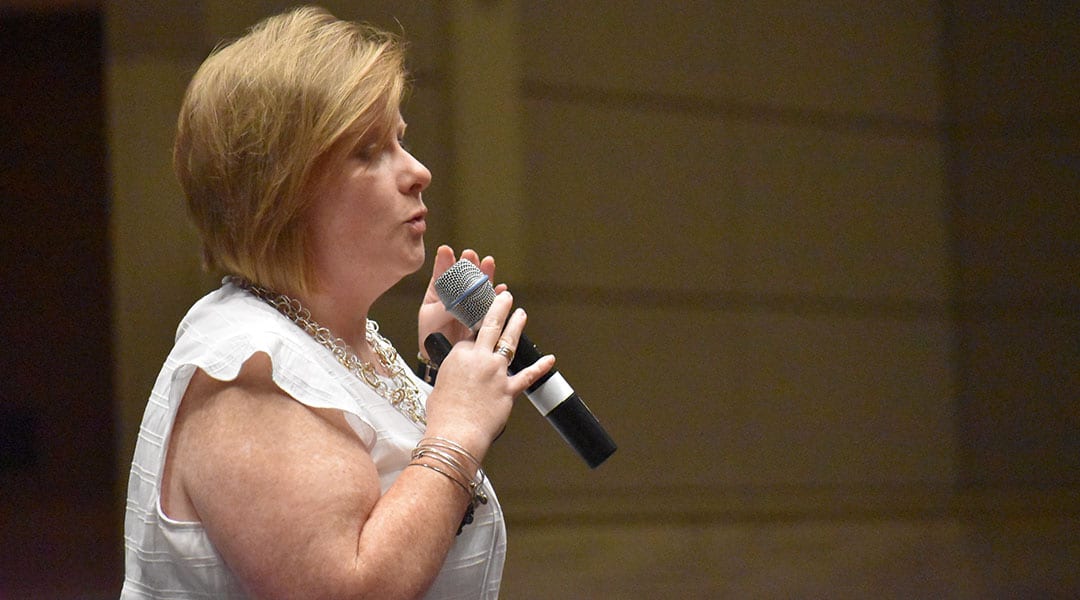 Suzette Walden Cole spoke to the University of South Carolina’s Greek community on the negative effects of hazing.

Max Gruver, a student at Louisiana State University, died in 2017 after an alcohol-fueled fraternity hazing, one of the more egregious examples of hazing that has alarmed universities, parents and students.

On Thursday, an expert on fraternity and sorority hazing told the University of South Carolina there is a way to ensure such incidents never wreak pain on families and college campuses.

Suzette Walden Cole, an alumna of the Alpha Delta Pi sorority at Mercer University in Georgia, shared her insights on hazing prevention and what being a part of the Greek community years out of college continues to mean to her.

“I believe in the power of fraternity and sorority when it’s done well,” Cole said. “I’ve seen situations where it has been life-changing.”

Gruver died early in his freshman year on Sep. 14, 2017, a day after being found with a blood alcohol concentration of 0.495 and THC in his system, according to a story shared by KNOE in July.

Mattthew Naquin, a former member of the Phi Delta Theta fraternity at Louisiana State University, is scheduled to be sentenced next month after being found guilty in Gruver’s death two years ago, according to The Advocate.

For Cole, the story went beyond headlines. Gruver’s mother, Rae Ann, is one of Cole’s sorority sisters. Gruver’s death resulted in passage of the Max Gruver Act in 2018, which made hazing a felony.

“Institutions get faced with challenges of what you can prove, versus what’s happening and sometimes, groups are really good about pushing stuff underground,” Cole said. “Until somebody comes forward and reports it, or people say no more, then it will continue to happen in the shadows.”

Cole is familiar with the University of South Carolina community as it’s where she earned a master’s degree in higher education administration in 2001. A professional speaker, she has been traveling throughout the week stressing the negative impacts hazing has on fraternity and sorority members nationwide.

At UofSC, the Office of Fraternity and Sorority Life lists accounts of hazing and conduct violations publicly on its website. This also occurs statewide in South Carolina in accordance with the Tucker Hipps Transparency Act, which requires Greek organizations to report conduct violations and make the incidents publicly available.

As a fourth-year student at UofSC and a member of Sigma Gamma Rho sorority, Shea Lockhart emphasized the importance of hazing prevention and the strong policies the university has in place to prevent hazing instances from occurring.

“I’ve seen a lot of different [organizations] participating in the hazing prevention events this week,” Lockhart said. “It makes me super proud to be a part of University of South Carolina Greek Life and to be a Gamecock.”

Following her hour-long presentation, Cole’s number-one takeaway for the Gamecock community is simple: “Stop, think, and then act.”

“It’s not the physical scars that hurt the most. Sometimes, it’s the trauma – that emotional, the psychological – that impact people over the course of their lifetime,” said Cole. “Those are things that we don’t see – that’s why it’s called the invisible side of hazing.” 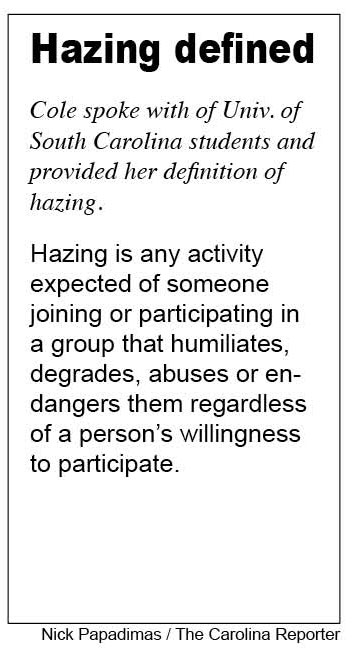