Hill, Gamecocks out for revenge on the diamond 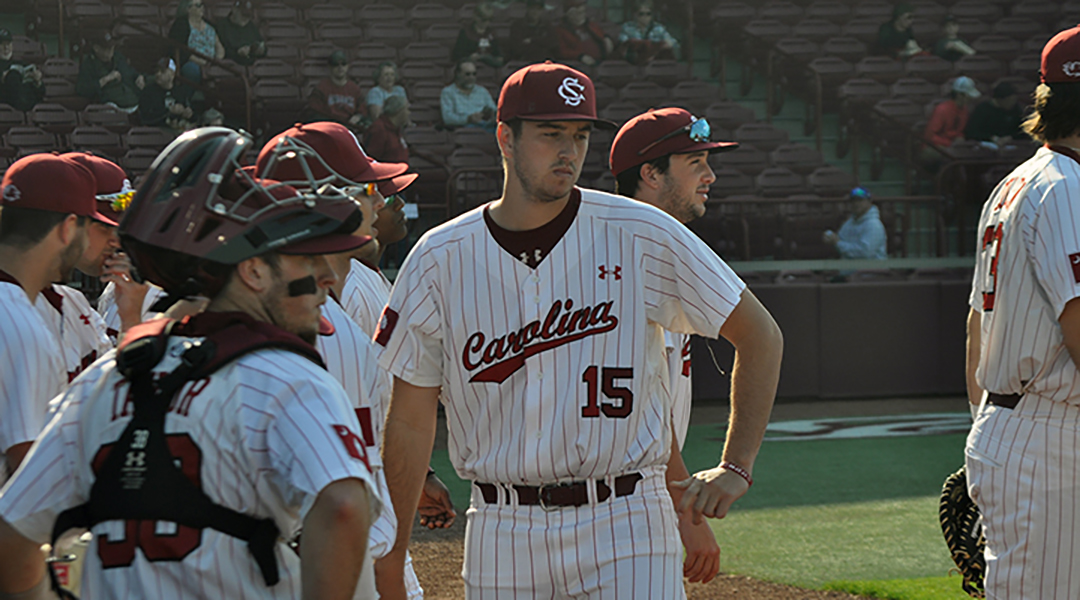 Junior pitcher Adam Hill gave up only one run in 5.1 innings in South Carolina’s third and final 2017 meeting with Clemson, which the Gamecocks lost 5-3. Hill will start against Clemson on Friday night. 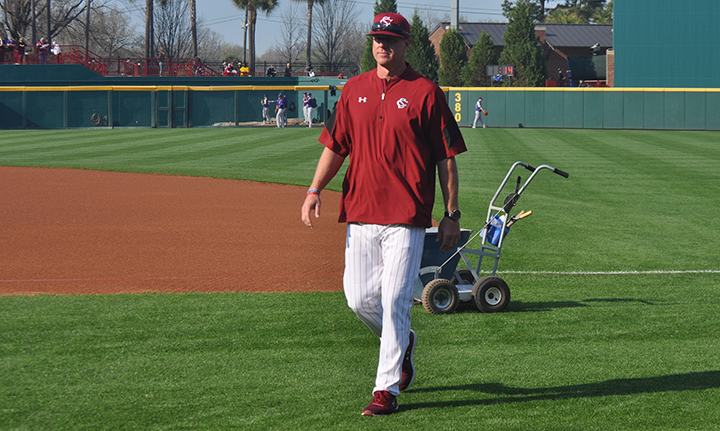 Though just nine games into their 2018 season, South Carolina has shown room for improvement in losses to Charleston Southern and midweek opponent Furman. 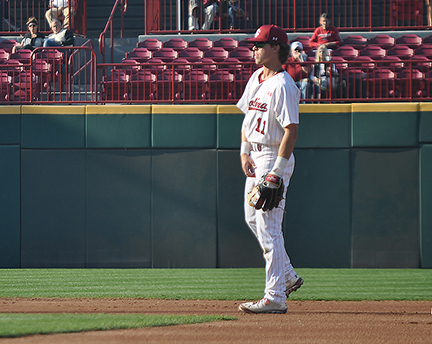 Junior infielder LT Tolbert likened the atmosphere surrounding the Carolina-Clemson series to his experience playing in an NCAA Super Regional as a freshman. 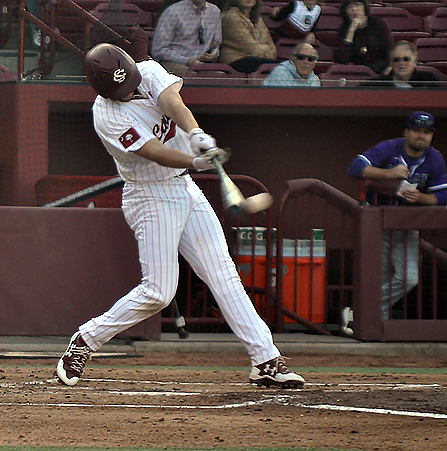 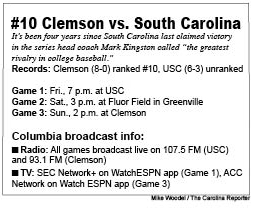 South Carolina looks to get back on the winning track this weekend in their annual three-game matchup with the Clemson Tigers.

The Gamecocks are out for revenge after taking last year’s Friday game at Clemson but then losing in Greenville and at home for their third consecutive series defeat. The Tigers lead the all-time series 176-137-2 dating back to a 21-8 victory at Charleston on May 12, 1899.

Offense has been the main storyline for the Gamecocks this season and will continue to be this weekend. South Carolina has batted .277 as a team in 2018 and slugged 18 home runs in its nine games. Junior infielder LT Tolbert leads the Gamecocks with 30 or more at bats with a .469 mark.

The Gamecocks scored 36 runs in three games across four days from Feb. 21 to 24, including a four-homer, 14-run showing against Charleston Southern. South Carolina bats then cooled as the team fell to CSU 4-2 Sunday and managed only six hits in a 6-4 loss to Furman at home Tuesday.

Meanwhile, Clemson enters Friday’s game a spotless 8-0 and ranked 10th in the Feb. 26 Baseball America poll. The Tigers swept William & Mary and Dallas Baptist and added midweek defeats of Furman and Winthrop en route to their longest win streak to start a season since 2010. Five of their games have been decided by only one run, with Tuesday’s win coming on sophomore catcher Kyle Wilkie’s RBI single in the 10th inning at Doug Kingsmore Stadium.

The series will be Gamecocks head coach Mark Kingston’s first taste of what he deems “the greatest rivalry in college baseball.”

“Every time I speak, everybody I meet, they point to how important this is to them,” Kingston said. “Fate will decide who wins these games, but we’re going to do everything we can to make sure that we have a great chance to do that.”

Despite offensive lapses, the Gamecock pitching staff has been rock solid so far this season. Through nine games under new pitching coach Skylar Meade, South Carolina’s opponent batting average stands at a stingy .185.

“I’d put them up against any hitters in the country,” Tolbert said of the team’s pitching staff Thursday at Founders Park. “But from our offensive standpoint, I don’t think we’ve lost any confidence just because we had two games where we didn’t put up 10 runs.”

“I played in a Super Regional my freshman year and Jonah [Bride] did too, and it feels like that kind of atmosphere,” Tolbert said. “It’s at the top.”

Asked if he had any friends on the Clemson team, the Upstate native Tolbert smiled before replying in the negative. Over a century’s worth of animosity rests between these teams, but this year’s series might be critical for Gamecocks junior righthander Adam Hill most of all.

After the Gamecocks split last year’s Clemson and Greenville games, Hill started the rubber match in Columbia. He struck out seven and surrendered one run in a five-hit, five-inning appearance before yielding to Colie Bowers. South Carolina took a 3-2 lead in to the ninth, where Seth Beer’s solo homer off reliever Josh Reagan sent the game to extra innings. The Tigers took the game, and the series, 5-3 in 11 innings.

Reagan was taken by the Oakland Athletics in last summer’s MLB Draft and finished the 2017 season with their Single-A affiliate in Burlington, Vermont. But Hill is still in Columbia, and will start Friday night’s game before a sold-out Founders Park. In spite of recording an opening day loss to VMI, he recovered with 14 strikeouts and no hits or walks in seven innings of work last Friday against Charleston Southern.

Expected to face Hill on the mound for Clemson Friday night is Jacob Hennessy, owner of a 2.45 ERA and only two walks in 11 innings.

The Gamecocks’ offense will face their steepest challenge yet Sunday when Hennessy’s fellow sophomore southpaw Jake Higginbotham takes the field at Clemson. A New York Mets draft pick out of high school, Higginbotham had his freshman season shortened by an elbow injury and did not pitch at all in 2017. So far in 2018 the Buford, Georgia, native has taken two wins from two starts against William & Mary and Dallas Baptist, allowing no earned runs in seven innings in the latter start on Feb. 24.

The 2018 edition of baseball’s Palmetto Series gets underway 7 p.m. Friday at Founders Park.