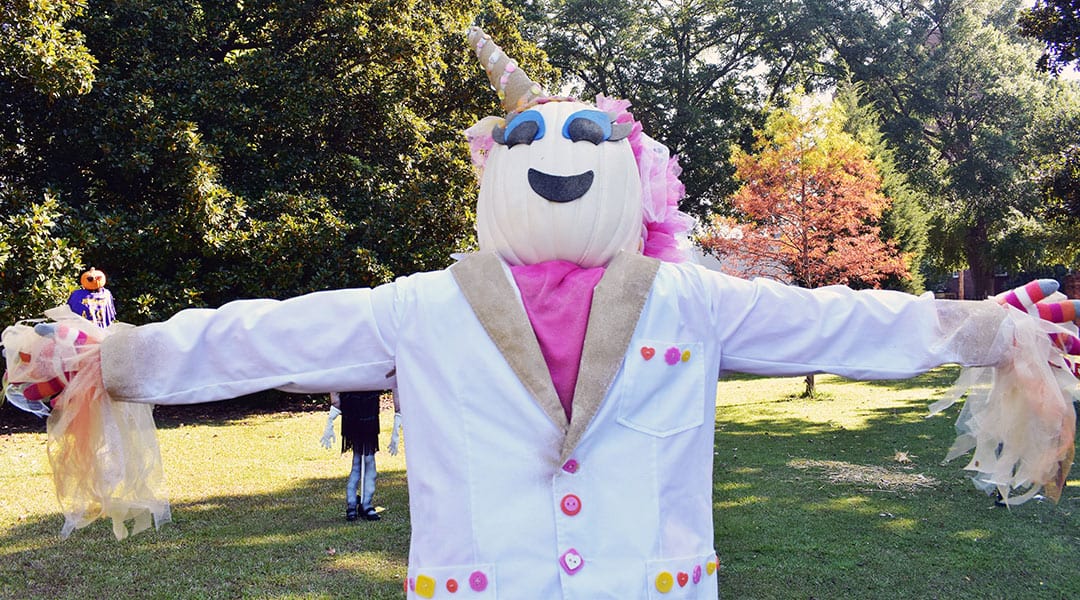 By MIAH NOWICKI and ELLE JOHNSON

Interested in seeing the community’s creative side this October? Historic Columbia is hosting the Scarecrows in the Garden Exhibit at the Robert Mills House where local community organizations, businesses, schools and artists can showcase their own scarecrow creation.

Heather Bacon-Rogers, Historic Columbia tour and program coordinator, said the organization has been presenting this exhibit for about eight years.

“We did have to take one year off, and when we did so the community let us know that we shouldn’t have taken that year off,” said Bacon-Rogers.

James Quint, Historic Columbia director of education, said there are usually between 12 to 24 scarecrows in the garden. Dozens of colorful, handcrafted and spooky scarecrows are on display. Each year, the number of scarecrows varies.

“Some of that depends on the artists who are bringing scarecrows over. We are still waiting on one artist who is bringing five scarecrows because they are doing the Addams Family,” said Quint.

Applications are available one to two months prior to the exhibit. Entry forms should be submitted by Sept. 27 to Historic Columbia. Anyone is able to design their own scarecrow and submit it for the exhibit as long as they follow criteria.

“One requirement is that the scarecrows need be family-friendly and be able to withstand the weather because it always rains in October,” said Quint. “It needs to be nothing too scary because there are so many families and kids that are coming to visit the scarecrows.”

Perishable materials, like real pumpkins, aren’t allowed because they will rot during the course of the month. The scarecrows also have to be able to stand on their own.

“People should come and see the exhibit because it’s a great opportunity for multi-generational interactions. We see a lot of grandparents bringing grandkids over and parents bringing their children over,” said Quint.

Kathy Langford, an area senior citizen center coordinator, recently brought a group of seniors to explore the scarecrows and grounds of the Robert Mills House. Historic Columbia organized a scavenger hunt that the seniors took part in.

“The seniors don’t really get out much, so they are much home bound. Some of them who can get out really enjoy the outings. We try to do as many trips as we can,” said Langford.

“I like the woman scarecrow with the flowers on her,” said Jones. “If I could make a scarecrow, I would make a woman and man and put it in my front yard.”

The touring group and coordinator made it known that they are big UofSC fans and would love to see a sports-related scarecrow.

“I would make our team Carolina and Clemson, with the school colors,” said Langford.

The Robert Mills Hills House gets a lot of people who return annually for Scarecrows in the Garden. Schools and local artists make several of the scarecrows that can be seen at the exhibit.

Throughout October, Historic Columbia hosts other Halloween events. Spirits Alive, on Oct. 11, is a cemetery tour at Elmwood Cemetery where people come dressed in costumes.

On Oct. 29, Trunk or Treat takes place among the scarecrows. Community organizations can decorate trunks for a contest and win prizes. If vehicle owners want to participate and hand out candy, they must register via email by Oct. 25.

“It’s a free event for the entire community to come gather in a safe space to trick or treat at car trunks filled with candy, at the Robert Mills House and in the gift shop,” said Quint. “There’s also a chance to vote for your favorite scarecrow at the Trunk or Treat event. They can vote in person here in the gift shop or they can vote online on Facebook by liking the photo of their favorite scarecrow.”

About 1,000 people come out each year for Trunk or Treat.

“It’s really about getting people active and outside. In a day and age when people spend a lot of time on their phones or playing video games, we want families to come and bond and enjoy our public spaces,” said Quint. 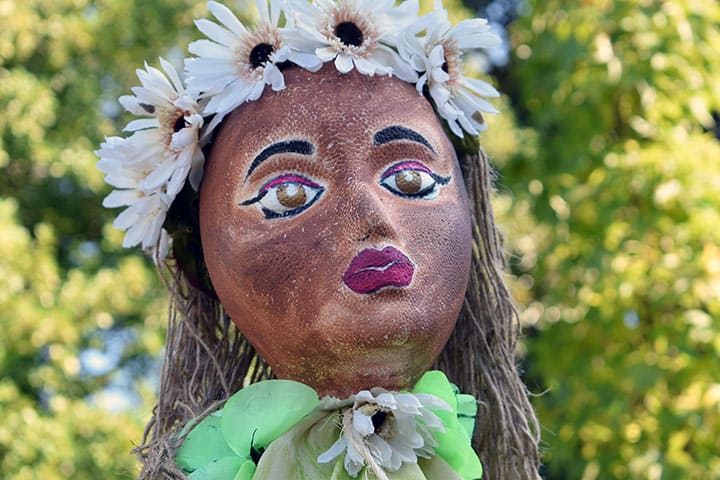 Of The Earth, created by Royal African Co., is a scarecrow featured in the exhibit. Community members can register to make their own scarecrow on Historic Columbia’s website. Entry forms should be submitted by Sept. 29.

Kathy Langford, an area senior citizen center coordinator, brought a group of men and women to go on a scavenger hunt around the garden. 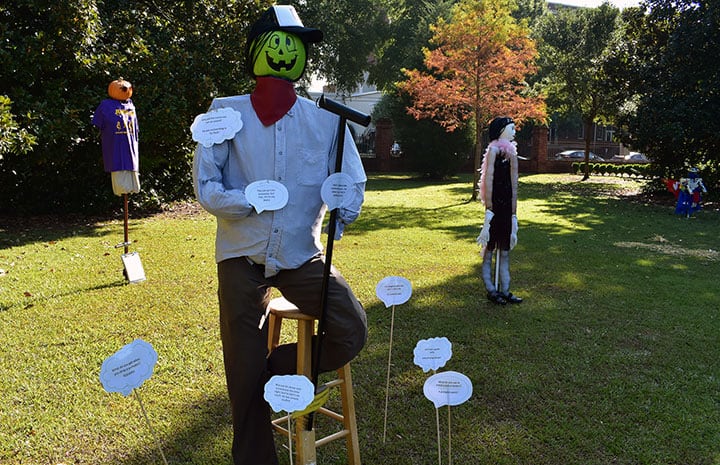 When you’re in the garden, enjoy some jokes told by the stand up comedian scarecrow. 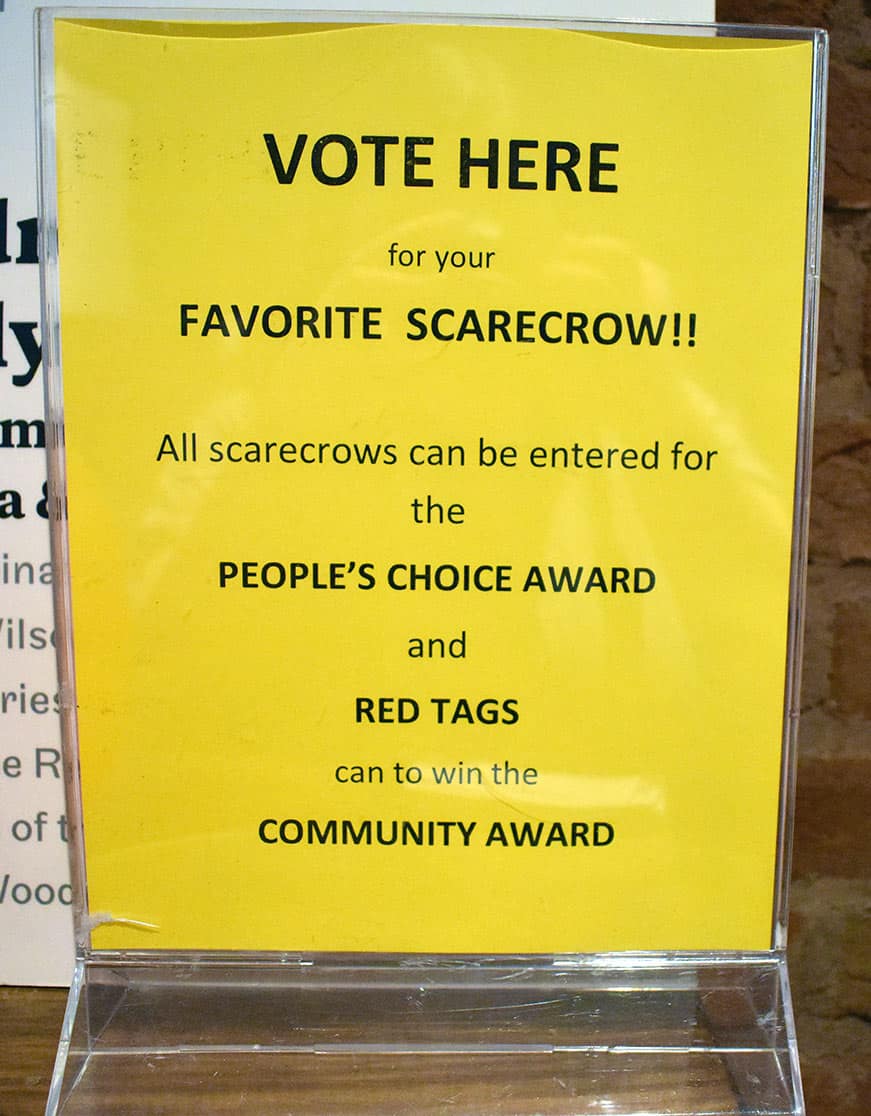 Visitors can vote for their favorite scarecrows in the gift shop at the Robert Mills House. They can also vote on Facebook by liking the picture of the scarecrow.