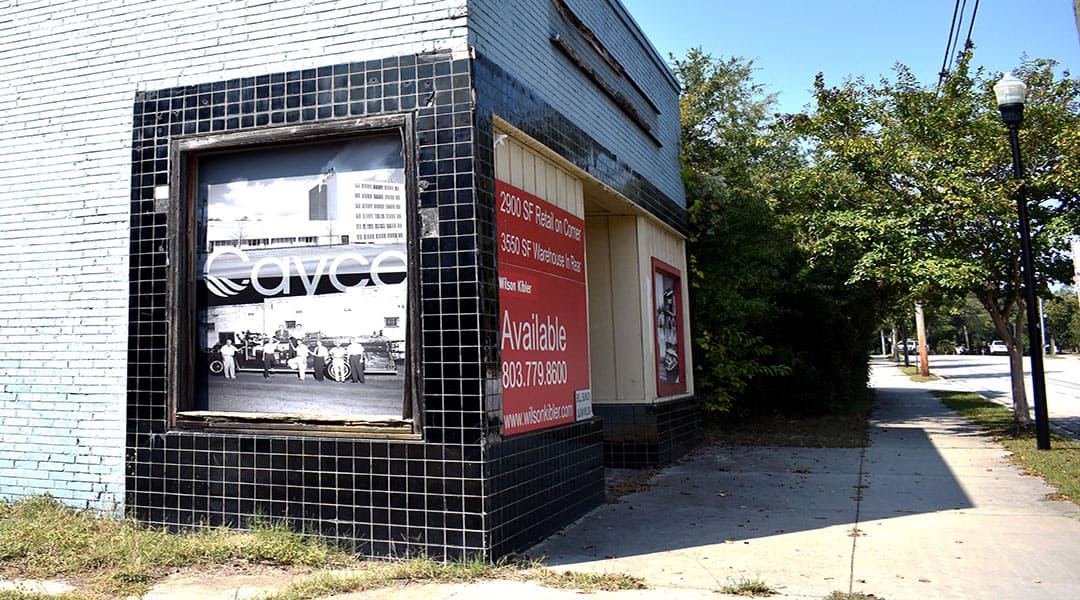 An empty building sits at the corner of Lexington Avenue and State Street in downtown Cayce. Historical-themed window wrappings were created by the city of Cayce and local business, Swatch Graphics, as an effort to beautify the area.

Across the Congaree River from downtown Columbia, State Street in downtown Cayce is a quiet area scattered with a handful of empty storefronts and fledgling businesses. Cayce Mayor Elise Partin, business owners and other residents are looking to bring “new life” to the once popular downtown.

Cayce might be a small point on a map, but the city holds significance in the history of the greater Columbia area.

“This area is older than Columbia, but everything shifted to the capital and this area became more rural,” said Andy Thomas, museum assistant at the Cayce Historical Museum.

Downtown Cayce once thrived as a railroad town in the early 20th century and State Street was home to the Cayce City Hall, fire station and theater. Old State Road, now State Street, used to cross the state from the sea to the mountains, and is the oldest road in South Carolina, according to Thomas.

“State Street is the original heart of our city,” Partin said.

Partin describes the city’s efforts as “previtalization,” or initiatives that motivate local business owners to invest in the growth of State Street. The purpose of previtalization is to draw in public interest before intensive revitalization efforts take place.

Many previous revitalization efforts in Columbia feature historic districts, like Main Street, the Vista and most recently, Five Points. Richard Burts, who has developed or saved historic buildings in Columbia including 701 Whaley and the Palmetto Compress warehouse, thinks Cayce has promise considering the history of the area.

Burts said the term previtalization can mean different things from restoring buildings to tearing them down. It is less controversial than the concept of gentrification of a community, which is often associated with developers forcing lower-income residents out of a developing area without consulting with neighborhoods.

Burts said, as with any revitalization effort, it’s important for the city and its residents to rally behind a specific vision to gain public support.

For downtown Cayce, the vision is centered on the arts as State Street is a recently approved arts district. At the end of September, the city commissioned two artists to create murals on State Street, joining the other public art mural that was finished last spring. A new art gallery, State of the Art, received a certificate of occupancy in October and its owners are looking to announce an opening date soon.

“Previtalization means the art of what’s possible, so it just helps people to see the vision,” Partin said.

After attending the Mayor’s Institute on City Design, an initiative with the U.S. Conference of Mayors and National Endowment for the Arts where a small group of mayors present a challenge in their community and receive advice, Partin started a community-wide event called Soiree on State. The empty buildings on State Street were cleaned and opened for local artists to feature their work inside the spaces.  The first Soiree on State was in June 2017, followed by a similar event in 2018 and the most recent soiree in April 2019.

Today, Partin said State Street is on the cusp of previtalization and revitalization, although, according to Burts, it can be a slow-moving process.

“Things like this don’t happen fast,” Burts said. “The most successful ones are organically grown as they should be.”

Burts said bringing life to one or two buildings might not be enough for people to see the big picture, but developing a block or corner can spark the necessary enthusiasm.

“Just like planting any seed, it can have a huge impact or it can, you know, not develop into exactly what you’re wanting to see,” Burts said.

Partin believes city government should be the enablers and encouragers, but it’s in the hands of the building owners if they want to make any changes.

Piecewise Coffee Company, the only coffee shop on Cayce’s State Street, opened its doors on July 8. Over a year ago, Stanton and Lindsey Scoma, owners and Cayce residents, stood in an empty office building with the vision of turning it into a community coffee shop.

“It’s also in a neighborhood and I think that’s a huge thing,” said Lindsey Scoma. “I think a lot of regulars would be disappointed if they didn’t have the relational aspect of their time here.”

The Scomas received a loan from the South Carolina Community Loan Fund, a nonprofit organization that assists revitalization efforts in the state to stimulate economic activity.

State Street is part of an opportunity zone, specific areas designated from a community development program sponsored by U.S. Sen. Tim Scott, R-S.C., as a part of the Tax Cuts and Jobs Act of 2017. The purpose is to encourage private investments in lower-income or under-utilized historic communities.

Stanton Scoma said he saw a need for specialty coffee options in Cayce because of what he calls “retail leakage,” meaning residents have to leave the area to find a coffee shop. Cayce’s first Starbucks opened at the end of September on Knox Abbott Drive.

Scoma also values the community aspect of Cayce and the ability to serve customers who walk to the coffee shop from their homes or the Riverwalk, which is 100 steps away.

“We felt like Cayce is a gem for the city with the rivers and the location to downtown Columbia,” Scoma said.

Partin said while not all business owners on State Street have to be Cayce residents, she loves seeing the community engagement.

“We want that investment of people saying, ‘My city is so cool, I want my business here,’” Partin said.

Swatch Graphics opened its doors in January 2018, becoming the first new business after initial previtalization efforts. While Swatch owners Tiffany Herring and Dawn Cotner said the timing was a coincidence, they knew they wanted to open their business in Cayce, a community they’ve been a part of for 14 years.

As a local business, the owners can be more hands-on with clients and the community compared to a larger company. One way they’ve invested in the community is by hosting students from digital arts classes at nearby Brookland-Cayce High School. Herring said community involvement does make a difference.

“I mean ‘shop local’ is a fun thing to say, but it’s necessary,” Herring said. “If you want a good thriving local economy, then you have to shop local. If you don’t then things get run down, buildings go empty.”

The West Columbia side of State Street has seen more consistent growth than Cayce. At the beginning of August, a rooftop bar, Black Rooster, opened at the luxury Brookland apartment development. Longer-standing establishments like New Brookland Tavern and Cafe Strudel have drawn people across the river since the ’90s.

The city of Cayce in general has had notable businesses open recently. Steel Hands Brewing, the largest production brewery in the Midlands, opened in 2018 about a mile away from downtown Cayce. A new higher-end apartment complex, Indigo at Brickworks, has been added on Knox Abbott Drive near the river. At the end of State Street, Henry’s Restaurant and Bar has been serving customers since spring 2017.

Despite some positive growth, many buildings on Cayce’s State Street stand empty. Herring said it seems like building owners in the area are waiting for others to make the first move and are more motivated by property values than helping grow the community.

“I think that’s greed through and through,” Herring said. “If you want to grow a place and make it thriving again… it’s important for all of the community to get involved.”

The city of Cayce is undertaking these revitalization efforts in hopes that State Street can thrive once again. In the future, Partin sees the area as a destination for people to walk through shops and galleries after grabbing a bite to eat. Stanton Scoma hopes walking trails around the river are expanded to connect Cayce to other parts of Columbia.

“We want to do more than just Piecewise, we want to make Cayce just the coolest place in Columbia,” Scoma said. 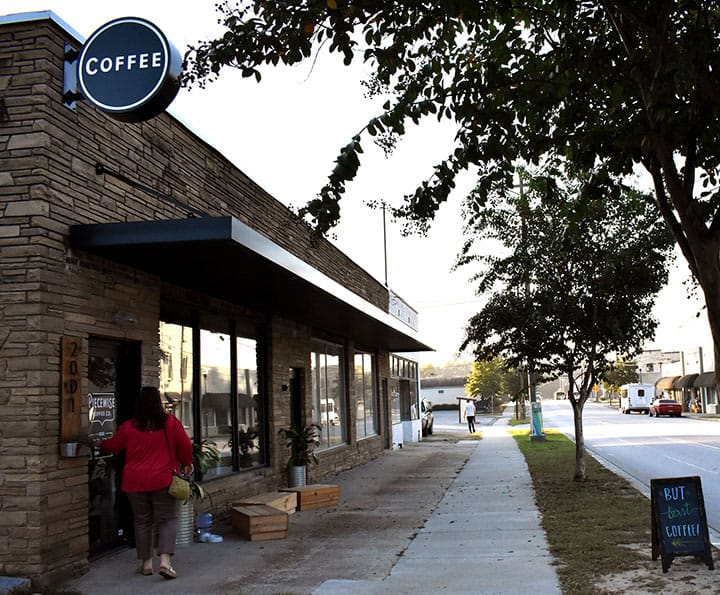 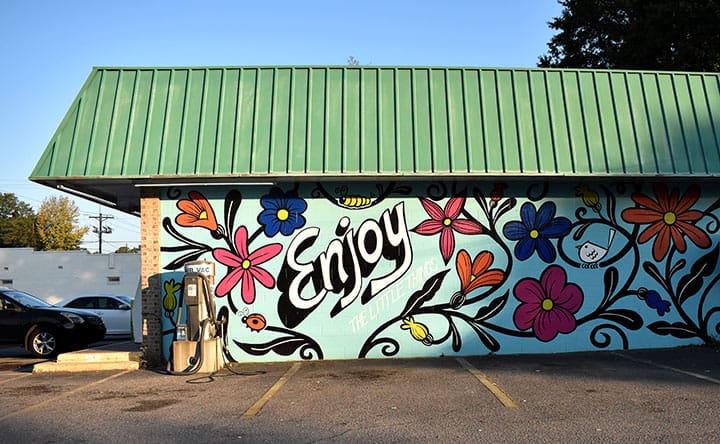 Downtown Cayce’s first public mural is located at Karatu Convenience Store on State Street and was created last spring by Will Bryan during the city’s annual event Soiree on State.

Historic downtown Cayce used to be a bustling railroad town in the early 20th century. The area started to decline after the post office, City Hall and other shops moved away. 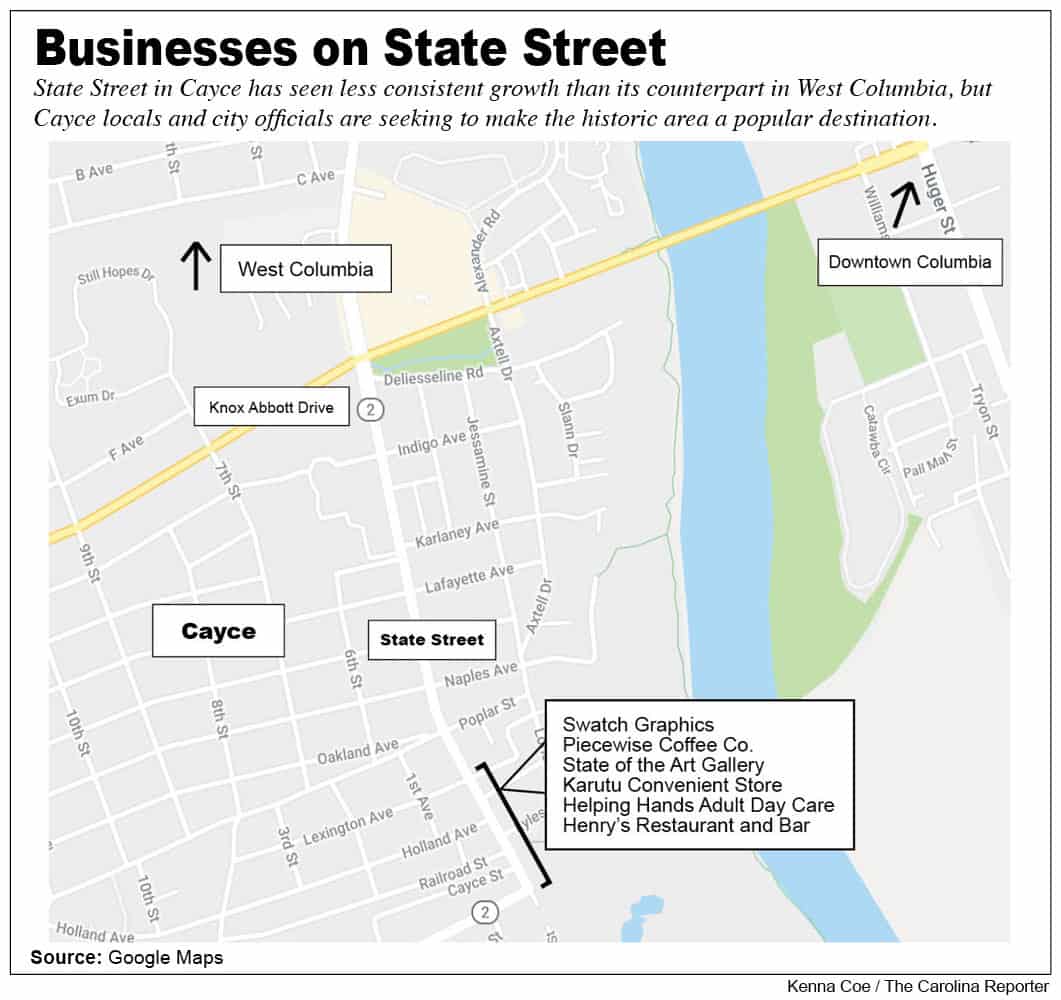 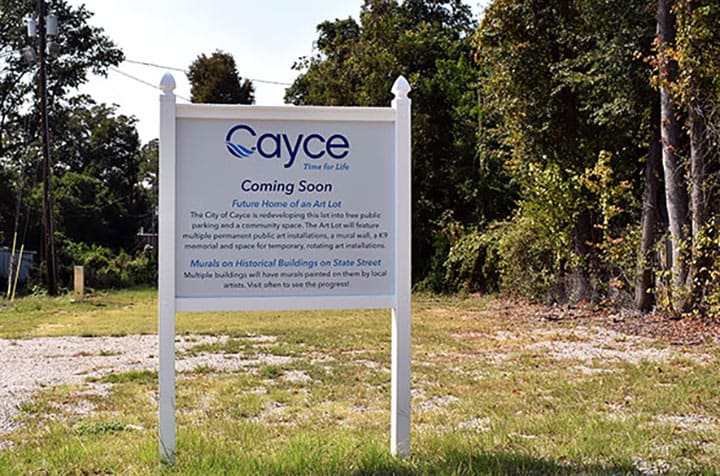 Downtown Cayce has made efforts to expand public art projects since becoming an arts district. The sign marks a future parking lot that will feature multiple art installations, including a mural, an area for rotating art displays and a K9 memorial.