Carolighting ceremony lights up the Midlands 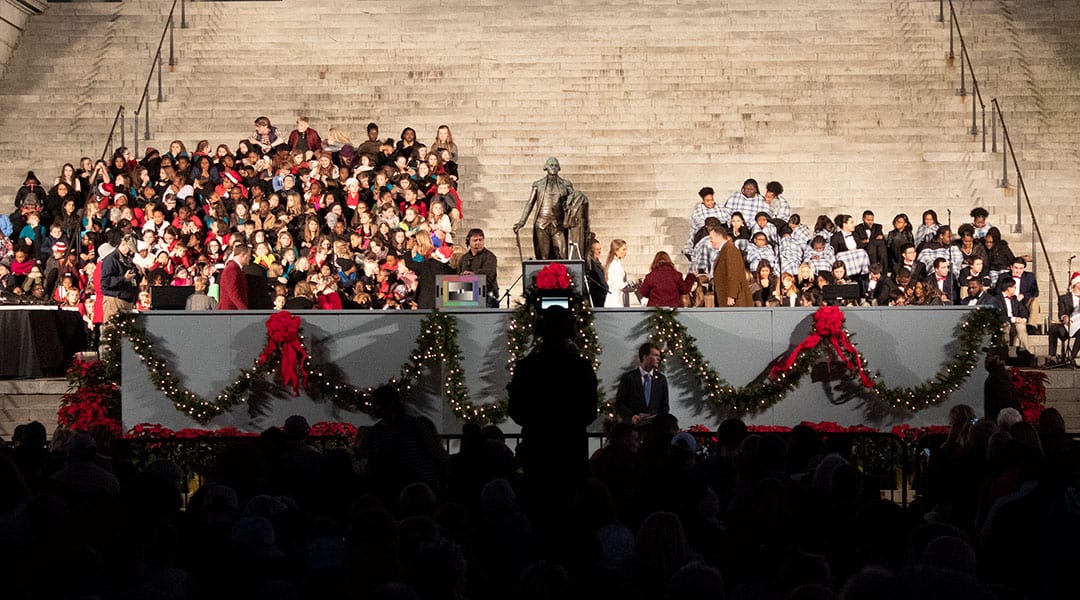 The 53rd annual Governor’s Carolighting took place last Sunday in front of the State House. The event featured music, the
governor’s Christmas address and a visit from Santa Claus.

For 4-year-old Vivienne Rourke, most Sunday evenings are usually quiet. However, this Sunday she got to meet Santa Claus himself at the 53rd annual Governor’s Carolighting ceremony in front of the State House on Gervais Street.

Hundreds of people attended the annual holiday event, filling the lawn and sidewalks in front of the State House over an hour before the event started. Although some seating was offered, many visitors brought their own chairs, sat on the foot of the Confederate Soldier Monument or merely stood while they listened to music and waited for the governor to speak.

The Rouke family, made up of Jessica, her husband Jim and their two children, Vivienne and 2-year old Thomas, are regulars to the tree lighting ceremony.

“We’ve actually never been here this early,” Jessica said, citing the mild weather. “We usually get here right when it starts.”

According to her mother, Vivienne asked Santa for an Elsa toy from the movie Frozen II, a Batmobile and a Yeti Spaghetti game.

Morgan Nichols, Miss South Carolina 2019, welcomed everyone at 6 p.m. by leading them in a rendition of “Deck the Halls.”

“I am so overjoyed and excited to be your host here on this beautiful night in Columbia for this special event, a time-honored tradition, to kick off our holiday season in South Carolina,” Nichols said.

The event featured musical performances from the Southern Bronze Handbell Ensemble, the Carolighting Children’s Choir, the Mark Rapp Group and others, ringing in the season with a variety of holiday tunes before Gov. Henry McMaster’s holiday address.

“What beautiful music,” McMaster said. “The talent that you see up here singing tonight is just one example of the great talent and the great future we have for our state. Isn’t that right?”

The governor focused on a message of hope for his address, recalling how the worries of childhood are often magnified.

“We thought doom was coming, but mostly it turned out they are only in our imaginations,” McMaster said.

“Now we are adults, and we have problems and disappointments and things coming everywhere real and imagined,” the governor said. “Don’t we wish we could know that everything would be all right?”

McMaster described how his Christian faith gives him hope and frees him from worry. He then led the crowd in the hymn “Jesus Loves Me.”

“That’s all we need to know. Merry Christmas,” McMaster said.

After McMaster’s address, Nichols again appeared on stage with the governor to count down the lighting of the Christmas tree. Everyone counted down from 10, and the 35-foot tall tree was illuminated by thousands of lights.

Nichols sang “We Wish You a Merry Christmas” with the several choir groups to close out the event. 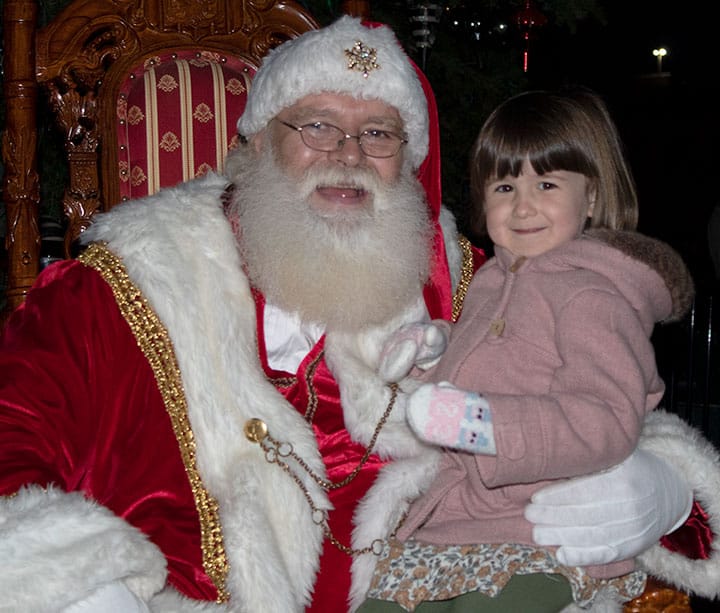 4-year-old Vivienne Rouke met Santa at the Governor’s Carolighting with her parents Jessica and Jim and her brother Thomas. 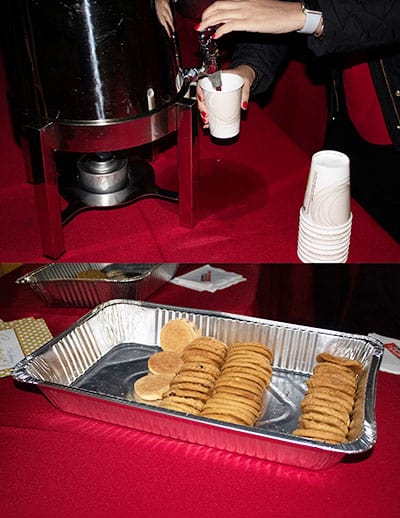 Free cookies and hot chocolate was available for the hundreds of attendees at the Christmas tree lighting. 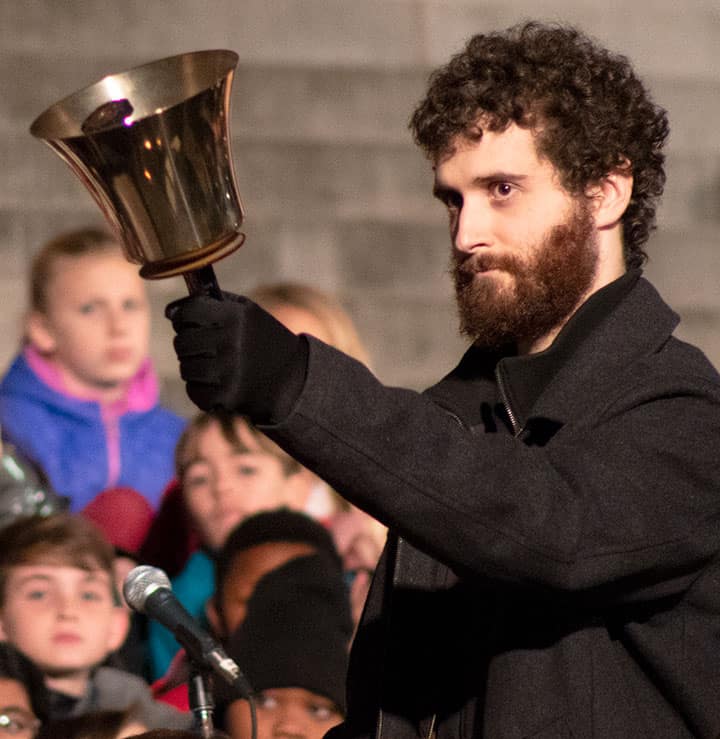 The Carolighting featured many musical performances from a variety of groups, like this bell player of the Southern Bronze Handbell Ensemble. 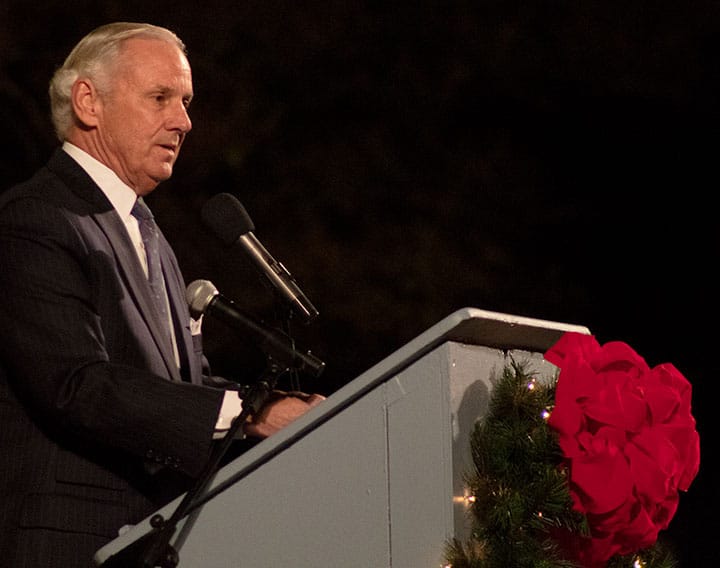 Gov. McMaster delivered his Christmas message at the Carolighting. “That’s all you need to know. Merry Christmas.” 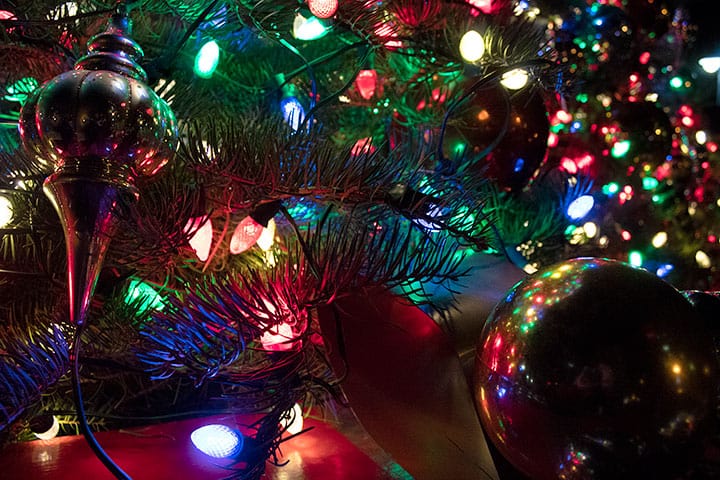 The crowd counted down from 10 as the State House Christmas tree was illuminated with thousands of lights.