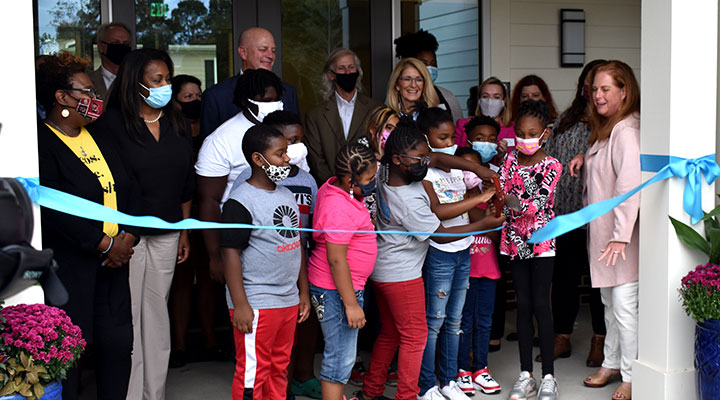 Children cut the ribbon at the opening of the Southeastern Freight Lines Education Center. These are the children that are being served by the nonprofit organization’s three housing programs. Photos by Nick Sullivan

Homeless No More’s new education facility is ready for class. The facility, with six spacious classrooms and two offices, will welcome its first students next week following Monday’s ribbon-cutting ceremony.

The airy $1.9 million education center off of Two Notch Road is far from the cramped, sweaty laundry room where adult clients of the nonprofit met routinely to learn life skills such as budgeting and writing a resume. The turning point came during the organization’s last summer camp, in which 40 children, many of them just emerging out of homelessness, were crammed together in one room.

“It was just, it was horrible,” Lila Anna Sauls, Homeless No More president and CEO, said Monday. “We were just surviving. And then we started dreaming.”

Today, the space can accommodate up to 20 people per classroom, which means losing a “daycare feel” in favor of “the look and feel of a curriculum-based program,” Sauls said. The project was funded entirely by private business donors as a part of Homeless No More’s Putting Families First campaign, which raised nearly $6 million between 2019 and 2020.

The facility is named Southeastern Freight Lines Education Center after its largest donor.

Intended for students of all ages, architect Megan Newbold said she wanted the “scale and the look of the building” to feel at home with the surrounding neighborhood.

“When you walk in, we wanted there to be a lot of natural light and a lot of fun, vibrant colors so that kids could feel like they weren’t out of place. They could see, you know, they walk in, it’s not a building just for adults, that they have a home here,” said Newbold, an architect with Garvin Design Group.

Residents of all three Homeless No More programs — transitional housing, emergency services and affordable housing — will have access to the new facility, which has a staff-to-student ratio of 1 to 8.

Among the facility’s trained staff is a children’s social worker who’s in charge of life skills programming for children and youth 18 years and younger. These classes tend to focus mostly on journaling and exploring the emotions surrounding a transition to a new living environment.

An education manager handles the implementation of the curriculum and works with parents. It’s important that parents understand how to work with schools on behalf of their kids even after they move out of Homeless No More’s facilities, Sauls said. 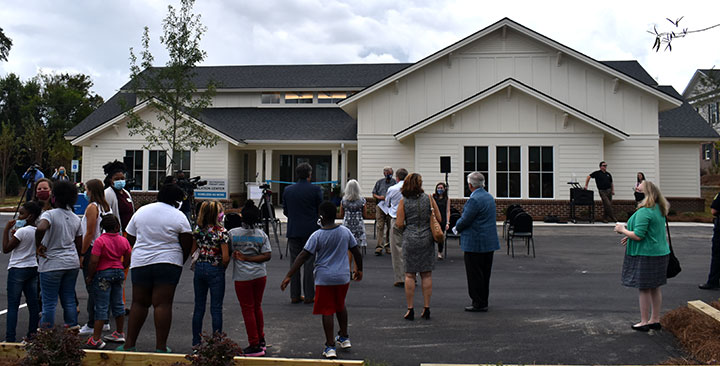 A crowd gathers outside of Homeless No More’s education center. The facility will have different classrooms for children, teens and adults. 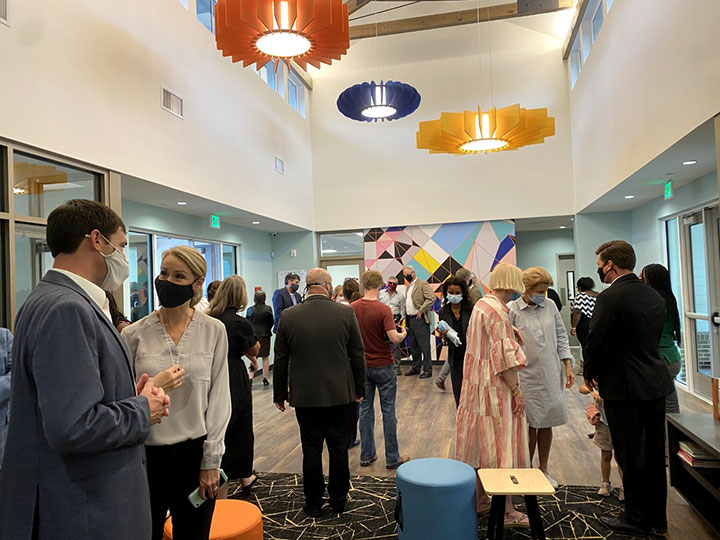 Community members tour the new facility for the first time. The light fixtures are made with felt to absorb sound.