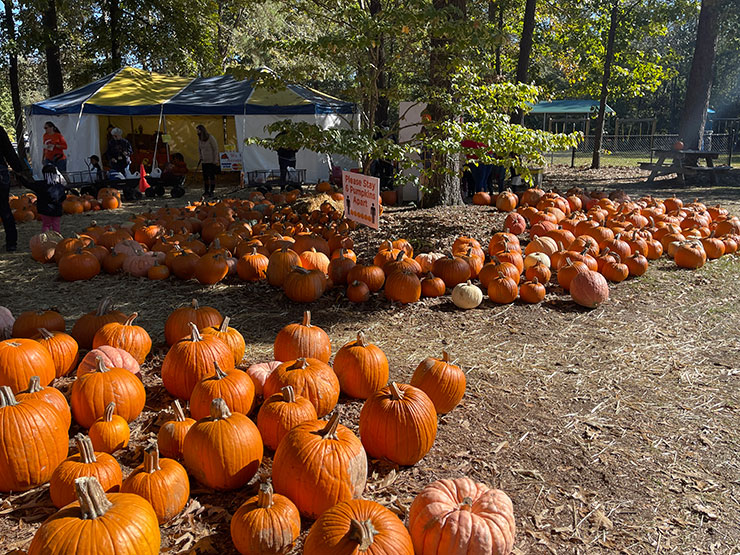 The Pumpkin Patch at Northeast UMC is located at 4000 HardScrabble Road and open until Oct. 31. Photos by Michaela Catoe

Walking into the Northeast United Methodist Church pumpkin patch for the first time, Erica Bush and her 5-year-old son Carter were bursting with excitement.

“This year was really special because now that he is 5 years old, he’s able to really be hands on with the pumpkins. So this is the first year to really do decorative pumpkins in our house,” Bush said.

Pumpkin Patch at Northeast UMC has been a staple of Northeast Columbia for over twenty years, one of a number of church-run patches that draw in visitors each October. The pumpkins decorate the front lawn of the church, leaving a colorful view from HardScrabble Road.

The congregation sets up the pumpkin patch every year as a fundraiser for the youth program, which has about twenty children. The money received is delegated towards youth scholarship events and to a charity of the children’s choice. In past years, the church has donated to organizations such as Palmetto Animal Assisted Life Services [PAALS] and United Methodist Committee on Relief [UMCOR]. In addition to fundraising, the children volunteer in the patch.

Bush said that purchasing from this charitable patch was fulfilling.

“This is a good opportunity for us to be able to give back to the community,” Bush said. “It’s not just us getting a pumpkin for a few weeks in October, but it’s actually going to help somebody. That’s amazing.”

Abbie Mantor, the discipleship coordinator and co-leader of the pumpkin patch, said that nearby schools will visit the patch to participate in fun activities such as reading a pumpkin story.

“We schedule about half an hour per class, and that gives them enough time to do a story, sing songs and pick out their pumpkin,” Mantor said.

Kendrick Hampton, a teacher at Education Express, brought his class of two year olds out to kick off their fall festival.

“Everyone got a pumpkin, we did story time and they played on the playground,” Hampton said. “I really hope they had a good time.”

The local patch receives its batch of pumpkins from a farm in New Mexico which specifically distributes to non profit organizations across the country as well as local farms.

“All the pumpkins that go bad, we donate to a local pig farmer,” Mantor said. “At the end, anything we haven’t sold we have to give away to a local farmer as well. It’s all donated.”

Raegan Prest, a mother of two from Elgin, has been coming to the patch for the past six or seven years.

“I have pictures of them from all of their past years, in their costumes too,” Prest said.

This year, they plan to leave with about ten pumpkins.

Mantor said the pumpkin patch had one of their best years last year despite the Covid-19 pandemic. They sold almost $38,000 and are on track to raise over $40,000 this year.

Last year, the patch enforced masks and social distancing. To continue with COVID-19 safety this year, they have kept some of the same protocols. The patch suggests social distancing by recommending that customers space out by staying six pumpkins apart.

“Even though it’s open and airy, we still try to be as cautious as possible, especially with the kids who cannot be vaccinated yet. So we want to be very cautious and make sure that everyone feels comfortable and loved,” Mantor said. 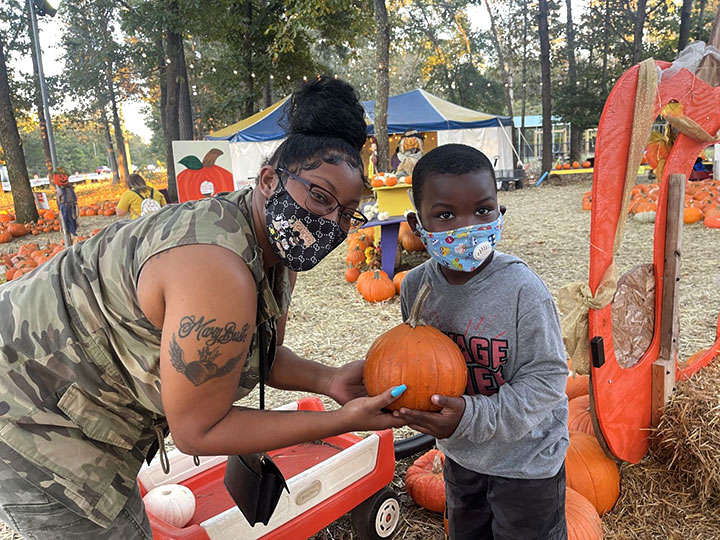 Erica Bush and her son Carter are looking forward to carving their pumpkins so they will be fresh for Halloween. 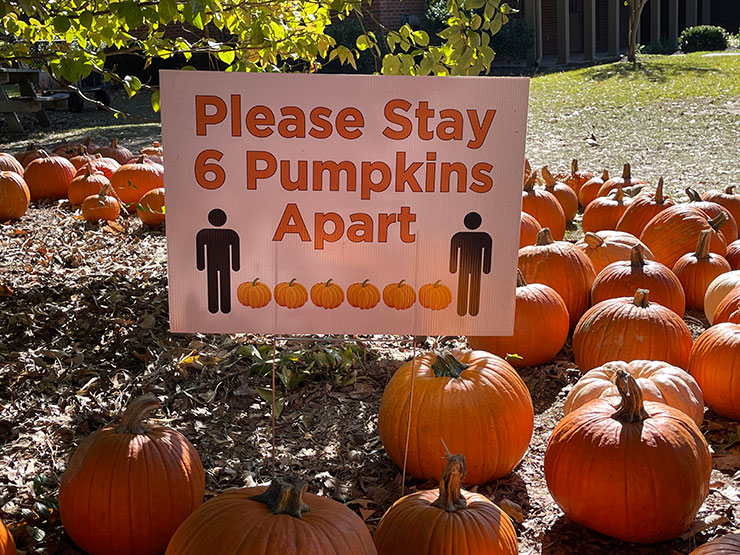 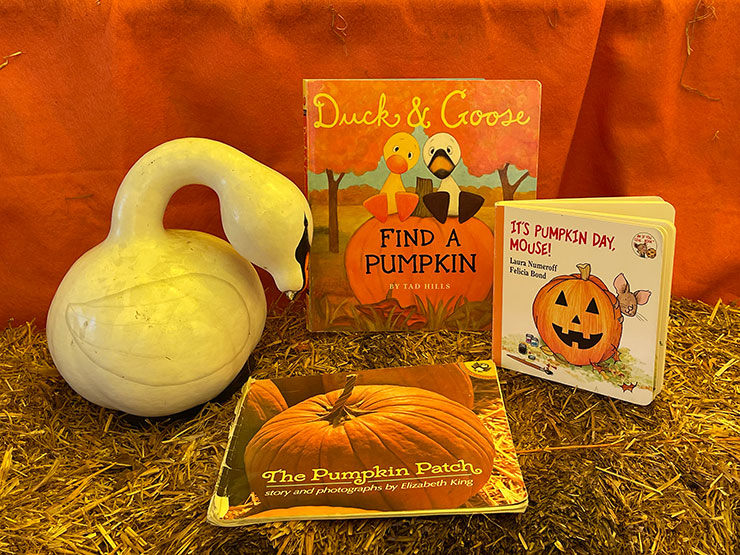 Church volunteers at the pumpkin patch love to interact with children both at the patch and in schools, where they frequently visit to read to students. 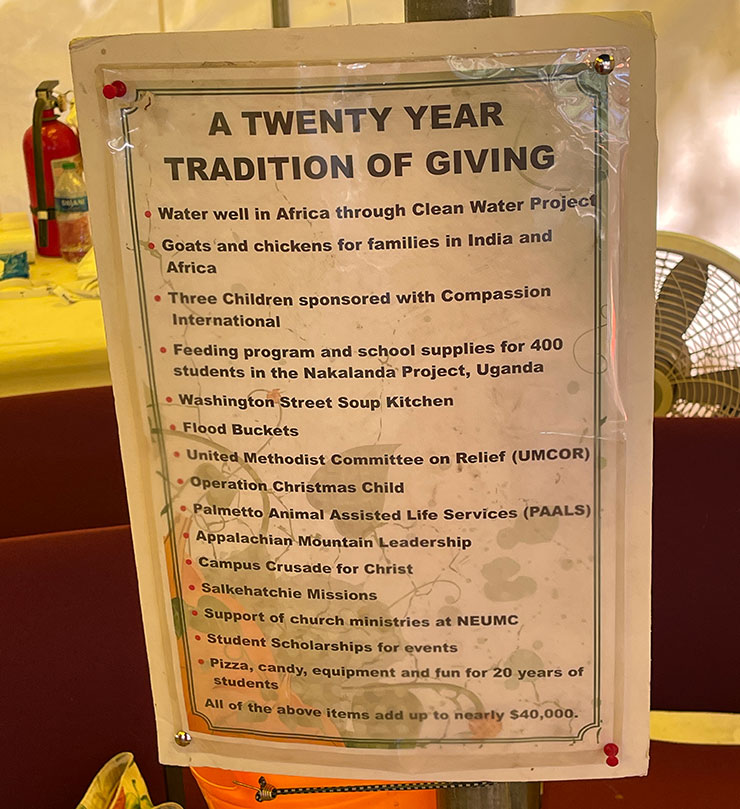 Once the patch is closed and the church tallies the profits, the children in the youth program decide where to send the donations. 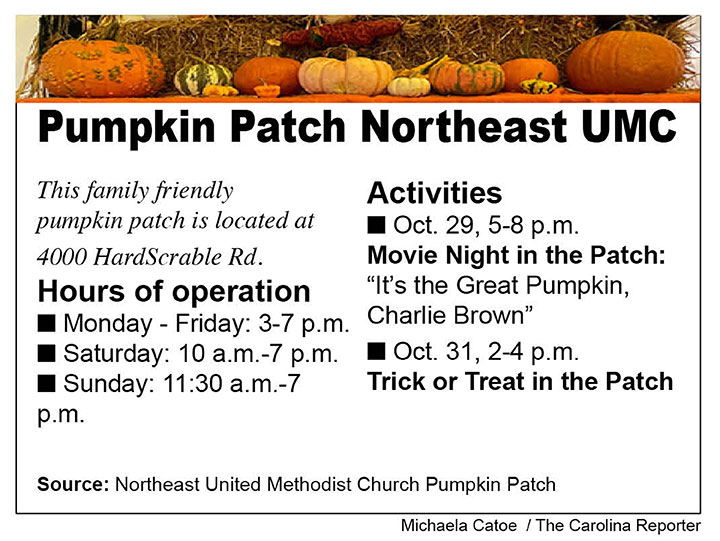