If not us, who? What it takes to become vice president 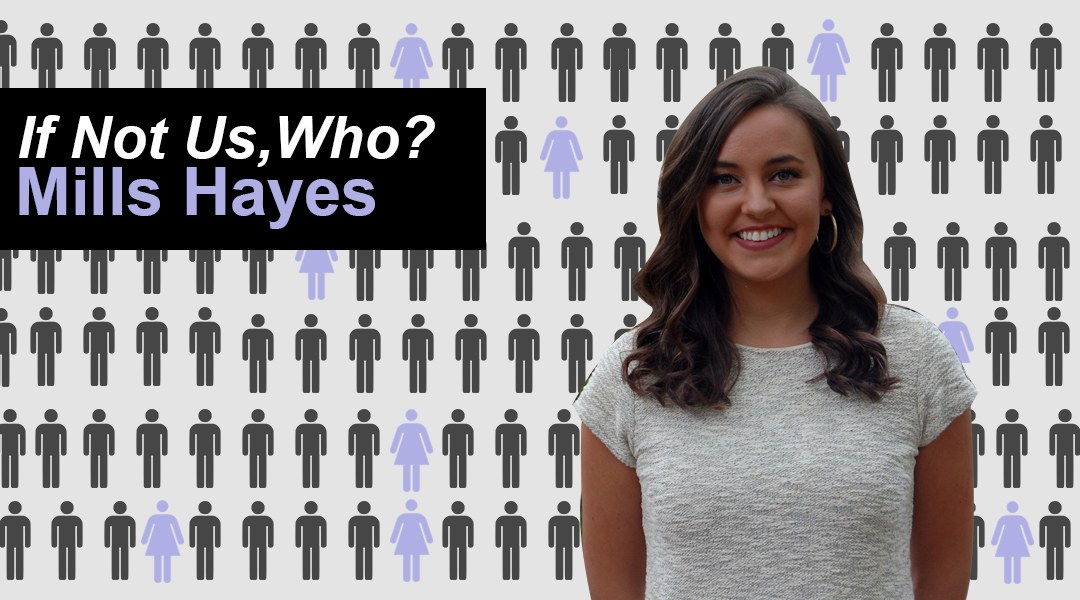 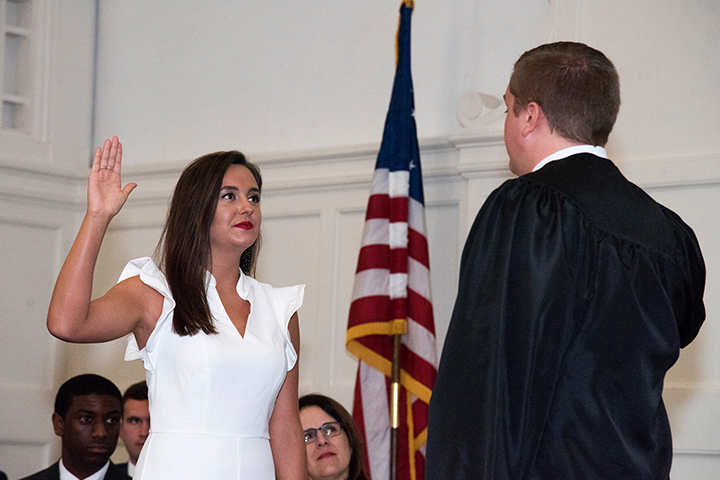 Mills Hayes being sworn in as the vice president of the student body. Credit: Mills Hayes. 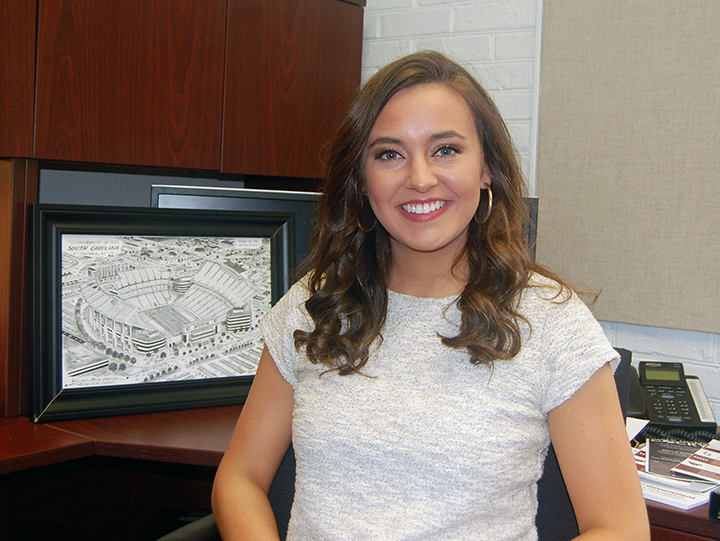 Mills Hayes in her office in the Student Government offices. 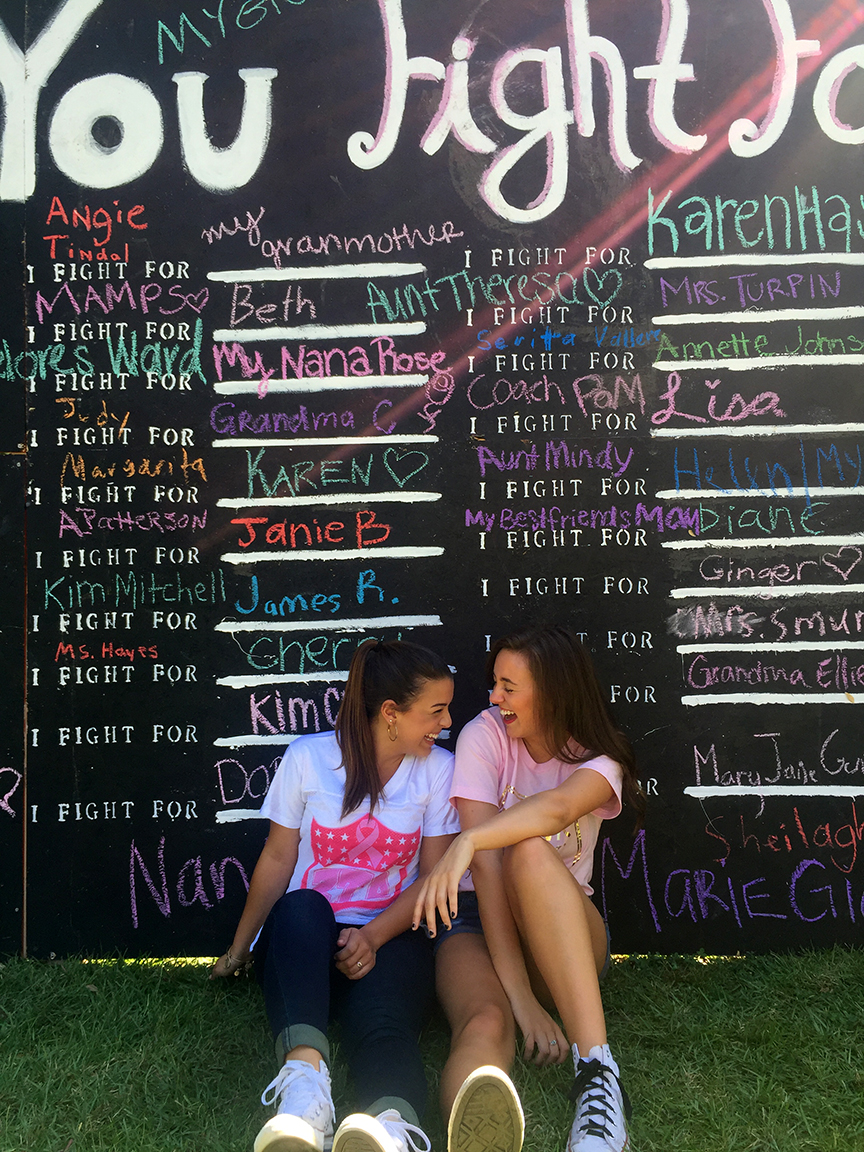 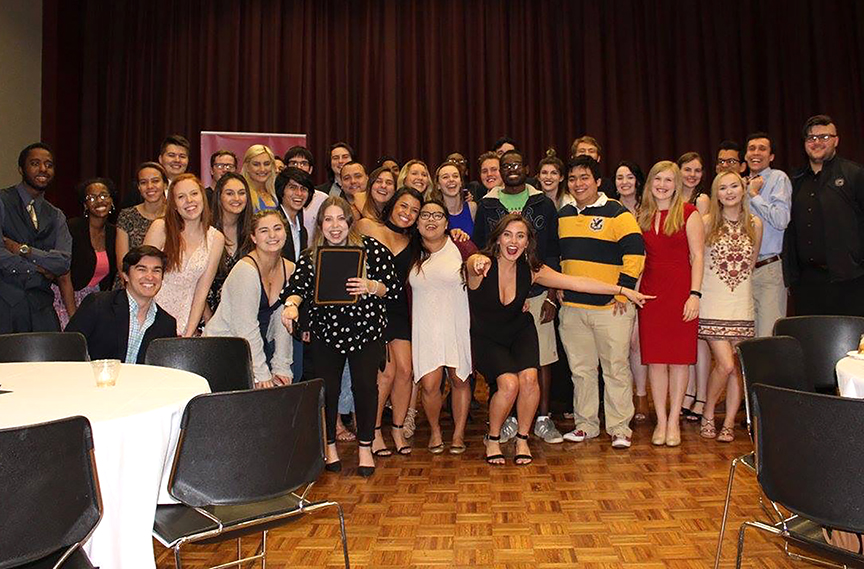 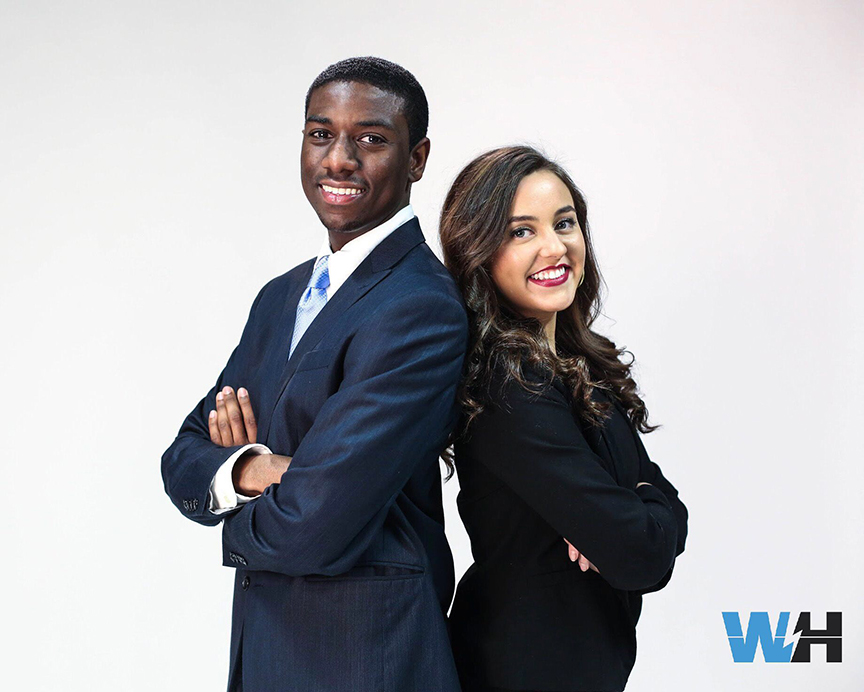 Mills Hayes, a junior journalism student at the University of South Carolina, sits in her new office inside of the Student Government wing. She was sworn in as the vice president of the student body less than a week ago.

For her, equal representation in politics is more important now than ever. It was a tenet of her platform, something she made clear while addressing students at her inauguration. At the swearing in, she wore an all-white jumpsuit, a color reminiscent of the women’s suffrage movement of the late 1800s and early 1900s, at her inauguration.

Women’s representation in government is still limited. In fact, according to UN Women, the organization dedicated to gender equality and the empowerment of women, only 22.8 percent of all national parliamentarians were women as of June 2016, effectively making 77.2 percent, or over three fourths of the decision-makers, men.

It’s no wonder that women’s rights aren’t represented effectively. Their voices never stood a chance compared to their male counterparts.

Those statistics don’t get much better locally, either. In South Carolina, women are also in the minority when it comes to representation in elected offices.

Ranking 24th in the country for gender parity, the state pales in comparison to others. In December 2016, the state swore in four women to the Senate, the most women sworn in at the same time in State House history.

At the university level, gender disparity in elected roles exists as well. According to the Daily Gamecock, only 20 percent of student body candidates are women, despite the majority of the undergraduate population being women.

This, coupled with WalletHub’s 2018 report placing South Carolina in the top six states that are the worst for women, proves the need for strong women’s voices at all levels of government, especially here in Columbia.

A reason for everything

“I wasn’t originally planning on going to the University of South Carolina,” Hayes said. “I’m from Lexington, which is about 30 minutes away.”

For this South Carolina native, her dream was to go out-of-state for college. However, she ended up changing her mind in favor of the University of South Carolina.

“I knew about the student media opportunities and journalism program,” Hayes said. “Those are two of the biggest reasons I ultimately chose to go here.”

So, she packed her bags and prepared for the next four years. Only, she never could have anticipated what they would have in store for her.

“The first thing I did was go through sorority recruitment,” Hayes said. “I think a lot of girls get caught up in superficial or cool things, but it was never about that for me.”

For Hayes, Zeta Tau Alpha allowed her the opportunity to support a cause close to home.

“My stepmother passed away from breast cancer, so it’s a cause that’s important to my family,” Hayes said. “She went from being this dynamic person, taking care of her kids and living life, to a woman confined to her medical bed. It was really hard to watch.”

It was life-altering moments like that that has made her the leader she is today.

“My family has always been in a transition; there’s never not something going on,” Hayes said. “Going through loss, watching my family members experience loss and then ultimately watching new relationships flourish gave me a unique perspective on life.”

When it comes to a position as immersive as the student body’s vice president, Hayes believes a leader should see problems from all perspectives. It is a lesson Hayes learned early on in her leadership roles on campus.

A leader in the making

“I actually tried out for freshman council and didn’t get it,” Hayes said, laughing. “It’s a council consisting of 30 freshmen who represent their grade and weigh in on student government issues.”

Hayes didn’t let that deter her, though. After joining Zeta Tau Alpha, and becoming the philanthropy co-chair for Think Pink, an initiative created to raise money for breast cancer awareness, Hayes decided she wanted to become more involved on campus.

“I also joined Student Gamecock Television (SGTV) within student media,” Hayes said. “I started off as a News 4 staffer and had no idea what I was doing.”

Sometimes inexperience pushes you to work harder, she said, which is exactly what Hayes did.

“I worked my way up to become the co-Weekend Preview producer, SGTV’s weekly segment, that updates students on events happening in the area,” Hayes said. Subsequently, she became the news director at the beginning of her sophomore year and later the station manager.

Her ability to manage a team while respectfully and quickly solving problems is the reason she was eventually put in touch with Taylor Wright, her presidential running mate on the Student Government ticket.

Hayes never planned to run for student body vice president. However, that all changed when she met Wright.

“We actually met before we decided to run together,” Hayes said as she threw her head back and covered her eyes. “It’s a pretty crazy story.”

When she was the station manager at SGTV, someone on the team group message posted a racially insensitive joke. It caused Hayes to re-evaluate how the team was being run.

“I removed her from the team and had an informal body meeting with the whole team to address the situation,” Hayes said. “I sat there with everyone, and said, ‘Let’s just round-robin this. I wanted to figure out what we could have done differently and understand the problem from every perspective.’ I wanted to make sure this never happened again.”

Twisting the ring on her finger, Hayes fast-forwards to a few weeks later, when she presented the station’s semester accomplishments in front of the student organization of leaders.

“I was so nervous. I had a feeling someone was going to ask a question about the message,” Hayes said. Sure enough, someone did.

“It was Taylor! He wanted to know how I addressed the incident,” Hayes said. “When we met to talk about potentially running, he brought up that moment and how well I handled it.”

With the help of others

Learning to be a leader starts well before you’re in the role. For Hayes, it started when she was young.

“I wouldn’t be here today without my parents,” Hayes said. “I’ve learned a lot from them both. I go to my dad for all of my career-related questions. And I credit my mom for teaching me how to be an independent, strong woman.”

Her list of mentors doesn’t stop there. One of the people who’s always been a role model to her is her sister, who is never short of advice to offer.

“She never gives up on people,” Hayes said. “I’m so independent, so sometimes I fall into the trap of a one-track mind, just focusing on what I need to get done.”

When she catches herself forgetting to check in with friends and family, she reminds herself of something her sister has always said: “Although I’m the star of my own show, I’m not the star of everyone else’s.” She said she has to make sure she supports others.

While it might seem like Hayes has it all together, it’s not always easy. With every new role comes new challenges, or the reminder of old ones.

“I’ve always had this insecurity that I’m not good enough,” Hayes said. “I’ve always felt like I needed to show the world that I matter in some way.”

In a time where social media is so encapsulating or there’s always an urgency to be working on a bigger and better project, it’s easy to get wrapped up in those insecurities.

“I think as women, we see each other as competition sometimes,” Hayes said. “But women who are against each other don’t get anything done.”

For Hayes, her goal as vice president is to remind students of that fact, the idea that there’s room for everyone at the table.

“You have to put yourself into perspective,” Hayes said. “Women can accomplish so much, especially with the support of one another.” 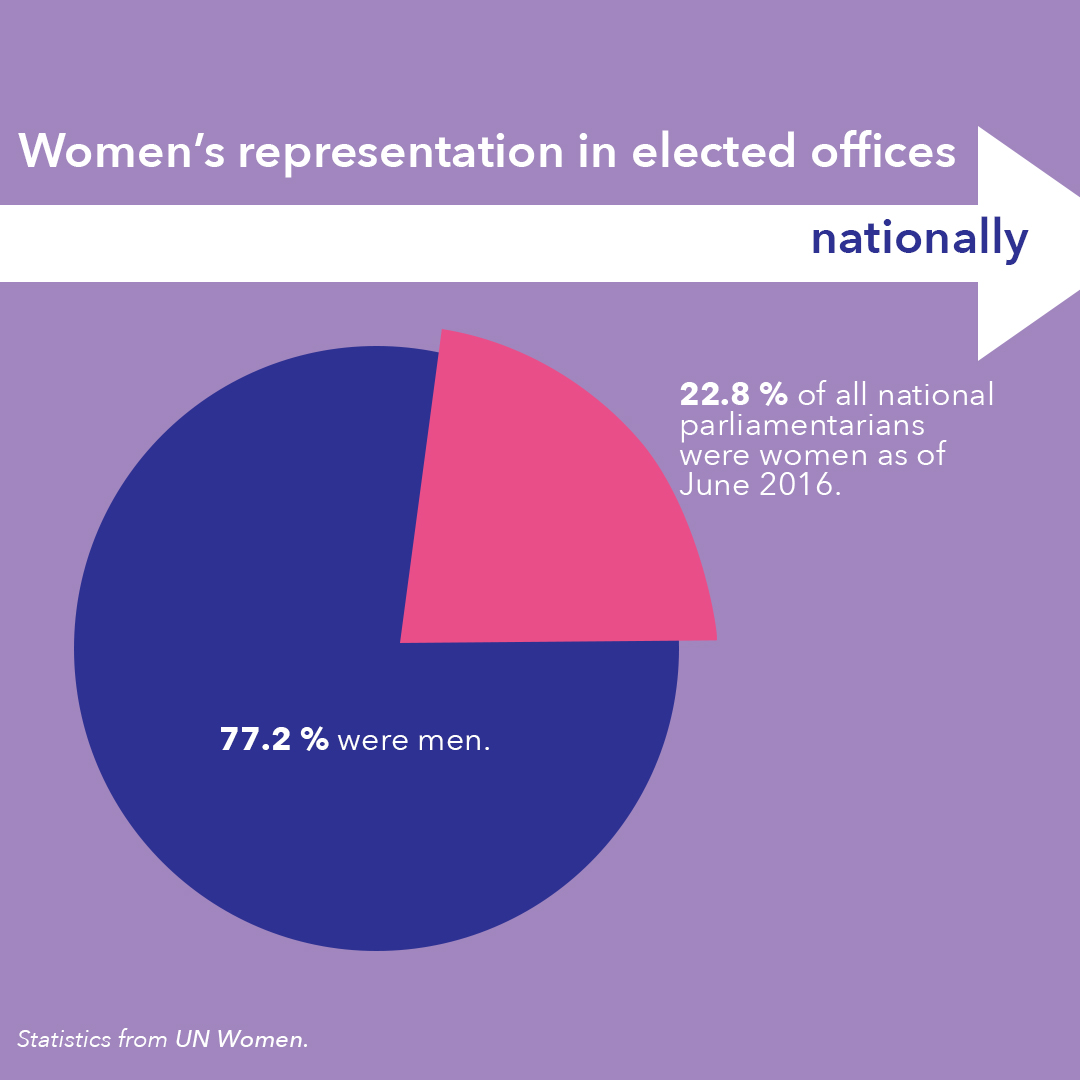 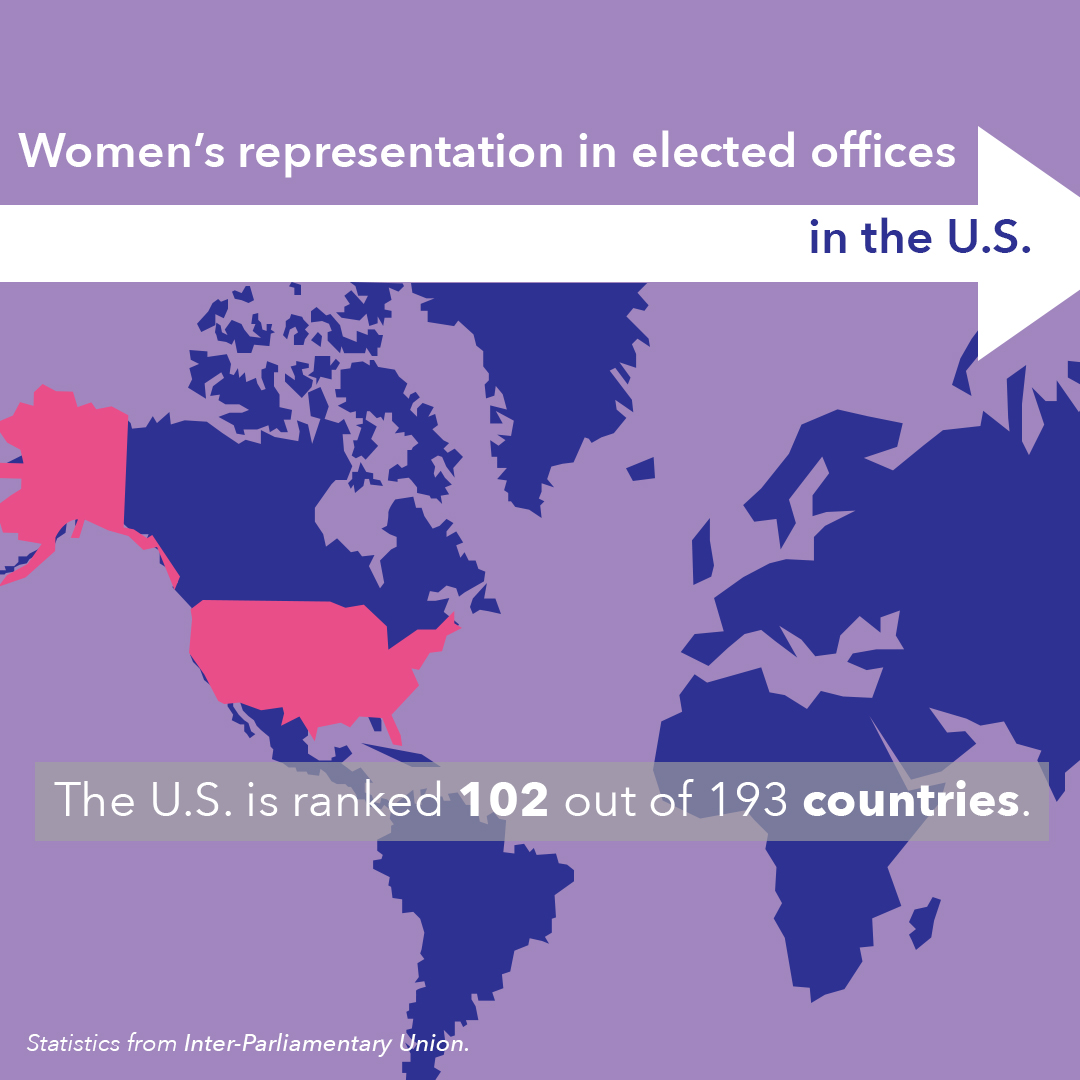 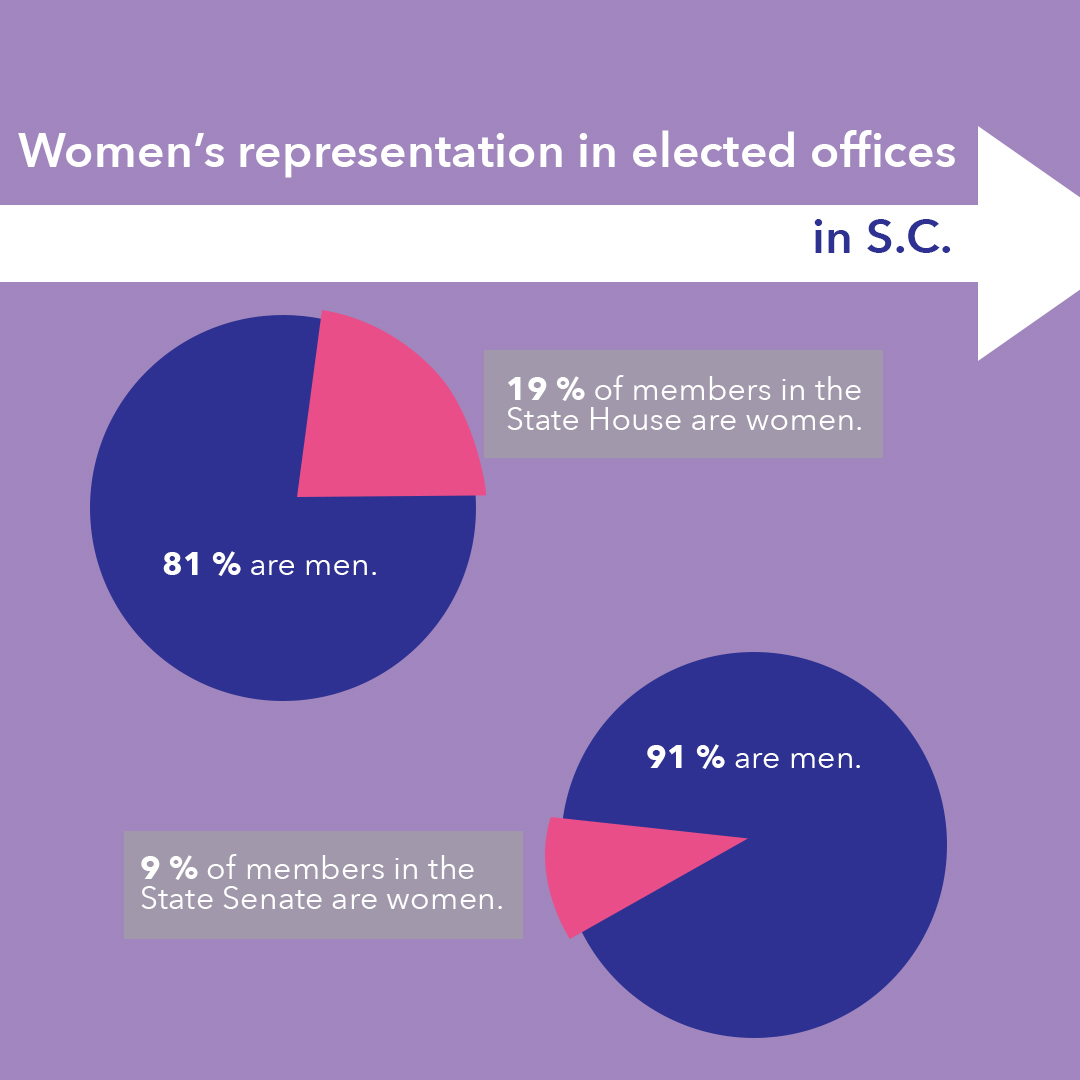 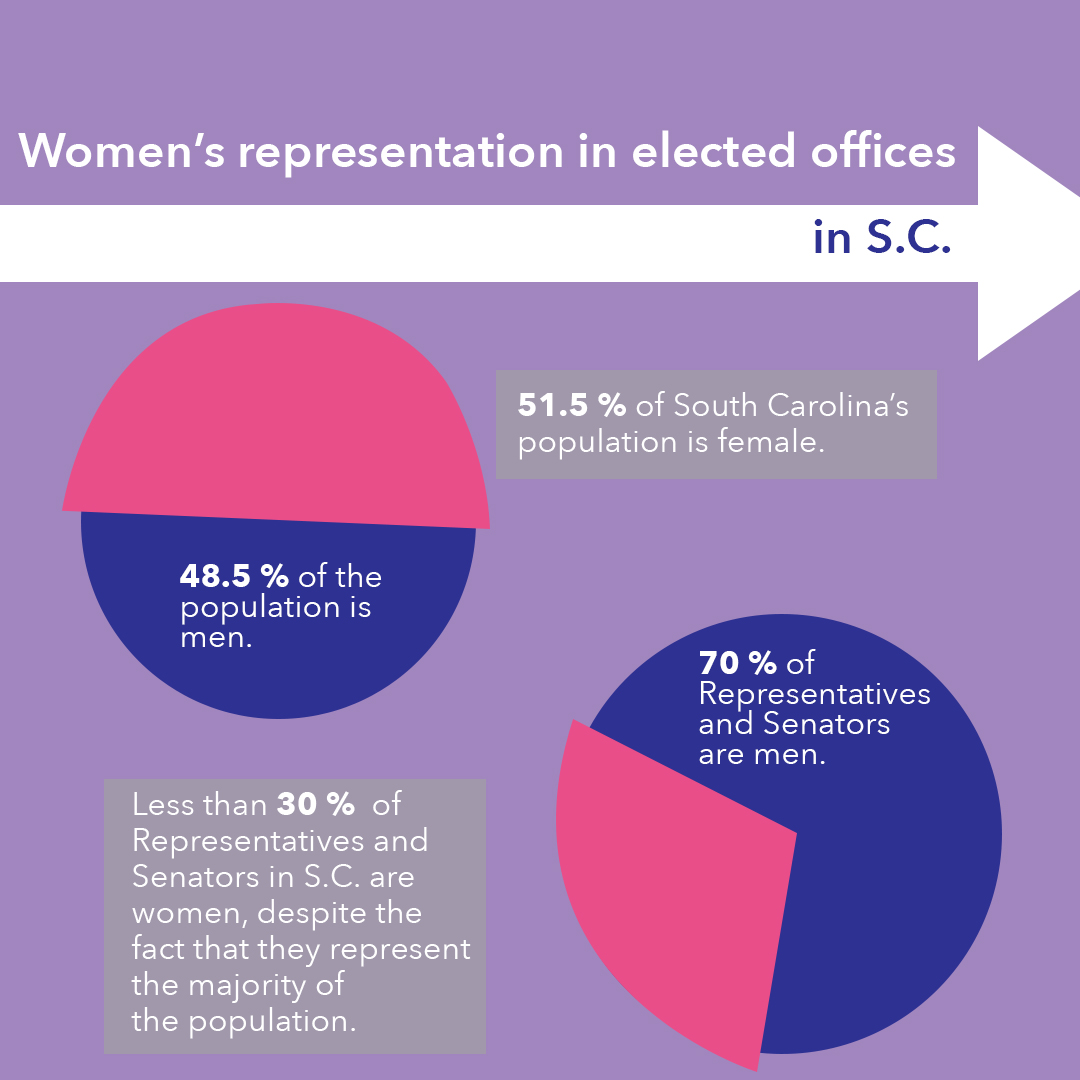