It’s not all sunshine and rainbows in Squishville 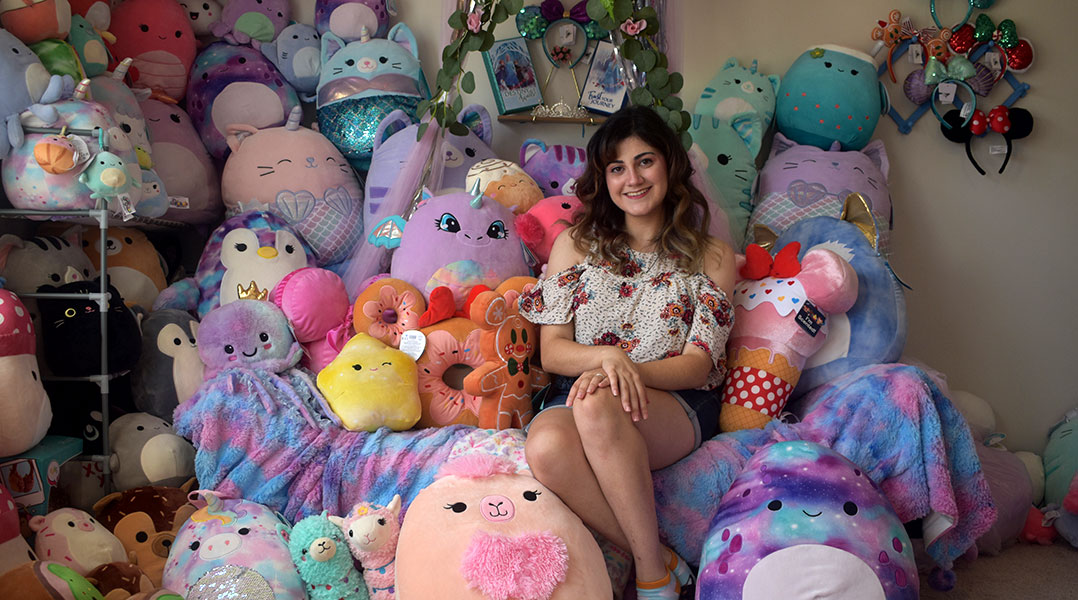 Sarah Kamai, 26, from Elgin, South Carolina, poses with her Squishmallow collection of about 110 of the plush toys. Photos by Anna Mock

You might think it’s only children who fight over stuffed animals, but adult collectors of the popular Squishmallows are facing the major problem of shelf clearing and reselling, causing animosity within the collecting community.

The minimalistic plush toys have been made by Kellytoy since 2017, but it wasn’t until the COVID pandemic that they exploded in popularity. Now, Squishmallow prices on reselling sites like Mercari or eBay are skyrocketing.

Haley Barlow, 25, a senior at the University of South Carolina, has seen Squishmallows go for exorbitant prices online.

Natasha Santiago, 20, a Squishmallow collector from Lexington, said her boyfriend paid $100 for one 5-inch Ronnie the cow.

Depending on the size, typically you won’t find a Squishmallow retailing for more than $30. Online however, certain popular Squishmallows, like axolotls and cows, can get quite expensive on the secondhand market.

In some cases it would be cheaper to buy a real axolotl than a Squishmallow one from a reseller.

Each Squishmallow comes with a name and short bio. For instance, Connor the cow is quite athletic. He loves to ride his bike and travel. Unfortunately, these days, Connor doesn’t do much traveling outside of USPS packages from sellers on eBay.

Part of Squishmallows’ popularity can be attributed to their soft, squishy texture.

Sarah Kamai, 26, from Elgin, South Carolina, is active in a local Squishmallow Facebook group. She collects Squishmallows because they help calm her ADHD symptoms, back pain, joint pain and migraines.

She’s found that shelf clearers have created drama, animosity and paranoia within her group.

At one point, the group erupted when a member believed they spotted a van belonging to a couple known for shelf clearing. According to Kamai, the member who spotted the van went as far as going into the store to “scope out” who the driver was.

The group is running another “investigation” into the Harbison Boulevard Target location because all the Squishmallow keychains were thought to be purchased by one person.

There have even been instances where members of the group have been outed as shelf clearers, causing lots of online fights. Eventually, people were ostracized from the group.

“For the most part, a lot of people get really serious about Squishmallows and will do anything to get, like, what they want, even if it means they’re gonna, like, manipulate you or scam you or whatever,” Sorenson said.

Paige Watson is the owner of Learning Express Toys in Lexington. Since last year she has noticed an influx of people looking to buy Squishmallows. Earlier this year, her store took steps to combat shelf clearing by only allowing four unique Squishmallows per customer.

It would be easy to assume that adult collectors are keeping children from buying Squishmallows. However, Watson doesn’t believe that’s the case.

Watson said “children are happy with anything,” and Learning Express has plenty of other plush toys for them. Most of her customers coming in for Squishmallows have been high school and college age or older.

Watson’s Learning Express is one of the few stores that accepts orders. She has seen people order from out of state just to ensure they get the Squishmallows they’re after. Sometimes this results in fellow collectors picking them up and shipping them or even driving across states to pick them up themselves.

Santiago frequents Learning Express Toys when on the hunt for more because of her proximity to the store.

“I feel like kids are pretty much content with a lot of stuff, depending on the age group,” said Santiago. “And honestly, even myself when I go to Learning Express, I’ve seen some of them just kind of look at them and go, ‘Yeah, that’s cute,’ and then they go and touch, like, a fidget spinner.”

The official Squishmallows Twitter made it clear that their product is for all ages.

“Age doesn’t matter when you’re part of the Squishmallow Squad!” a tweet reads.

Despite the online drama, collecting Squishmallows can be wholesome fun with the right attitude.

“I think if you go into it with a good heart and good intentions, you can meet other people with the same mentality and have a good experience,” Kamai said.

Connor the cow, a popular Squishmallow, sells for $105 on eBay. Connor would have retailed for no more than $30. 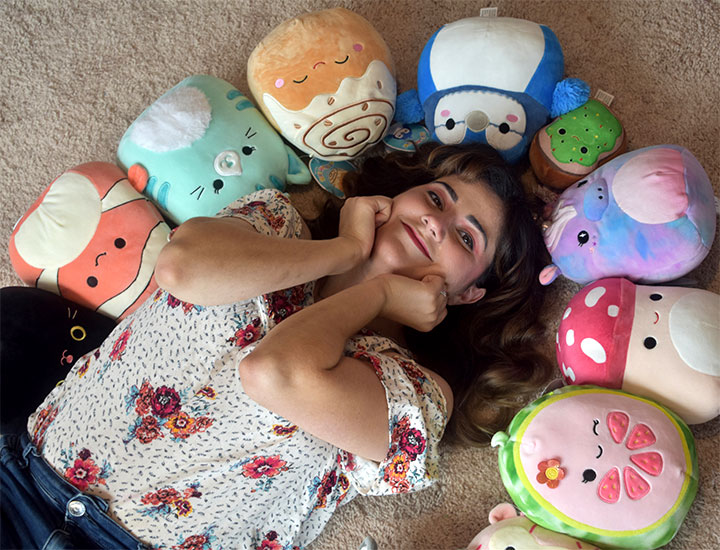 Kamai says her Squishmallows have helped her cope with her ADHD and chronic illnesses.

At Learning Express Toys in Lexington, a sign dictates that only four Squishmallows are allowed per customer with no duplicates. The store’s owner put the sign up after noticing issues with shelf clearers. Photo by Sebastian Lee 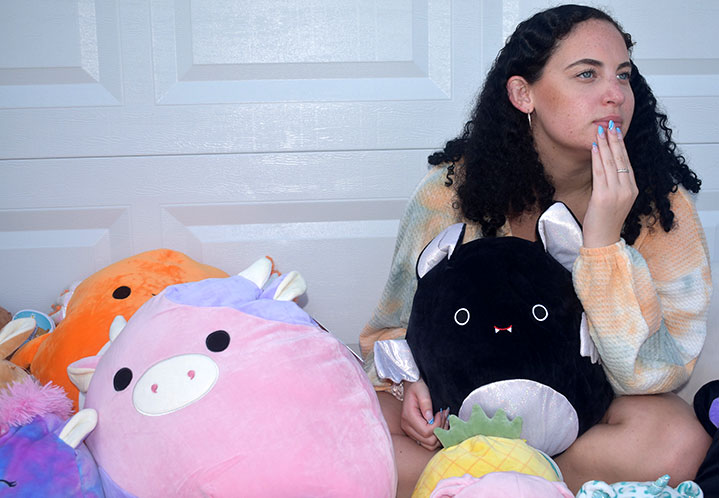 Natasha Santiago, 20, from Lexington, South Carolina, contemplatively sits among her Squishmallow collection. She envisions herself collecting them for years to come.  Photo by Anna Mock