South Carolina is one of only two states that has no laws to punish adults and minors who share sexually explicit photos on the internet without the consent of their partner.

“It’s a human trafficking issue, not just about sending an elicit picture somewhere,” said Rep. Chris Wooten, R-Lexington, the chief sponsor of this bill. “For me, having two daughters and knowing that this is the world we live in, my goal is to put a little teeth in what we have.”

The growth of social media and various messaging apps has vastly changed the way that people communicate, and lawmakers and law enforcement say there are not enough tools to deal with pornographic images that a vengeful ex-partner might circulate.

“They’re referred to our victim’s services unit, but there’s not a whole lot we can do because there’s no law on the books. If it’s a continuing type of thing, we can get creative and maybe let it fall under the harassment laws,” said Lt. Chris Lindler of the Richland County Sheriff’s Department.

According to a study by Thorn and Benson Strategy Group, 40% of teens ages 9-17 said that sharing sexually explicit photos was “normal.” The same study reported that 1-in-5 girls, ages 13-17, have sent nude photos.

Without this bill, victims are left with very few options for what to do.

“Our laws basically need to keep up to date with how technology is changing the potential crimes and the potential harm that people can do to each other,” said Brooke Burris a co-chair of the Tri-County Human Trafficking Task Force. The task force is a coalition of law enforcement, social service agencies and nonprofits in Berkley, Charleston and Dorchester counties.

Several non-profit organizations, including Lighthouse for Life, a Midlands organization that fights against human trafficking, are strong supporters of the legislation.

“If you talk to any of the victims of this crime, it’s horrific. Because once their image is on the internet, it can’t be retrieved. It’s out there forever,” said Robert Healy, the director of public policy for Lighthouse for Life.

The bill, currently in the criminal laws subcommittee of the House Judiciary Committee, has 27 supporters so far, 25 Republicans and two Democrats. Massachusetts is the only other state that does not have a cyber sexual assault law.

“We don’t want to be last in the nation on this again, on something else,” said Wooten. 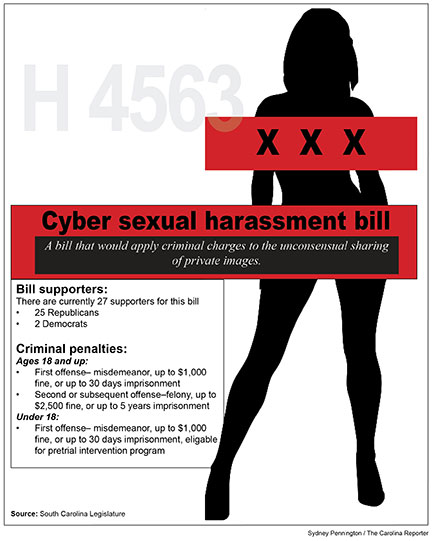