When life gives you lemons…. 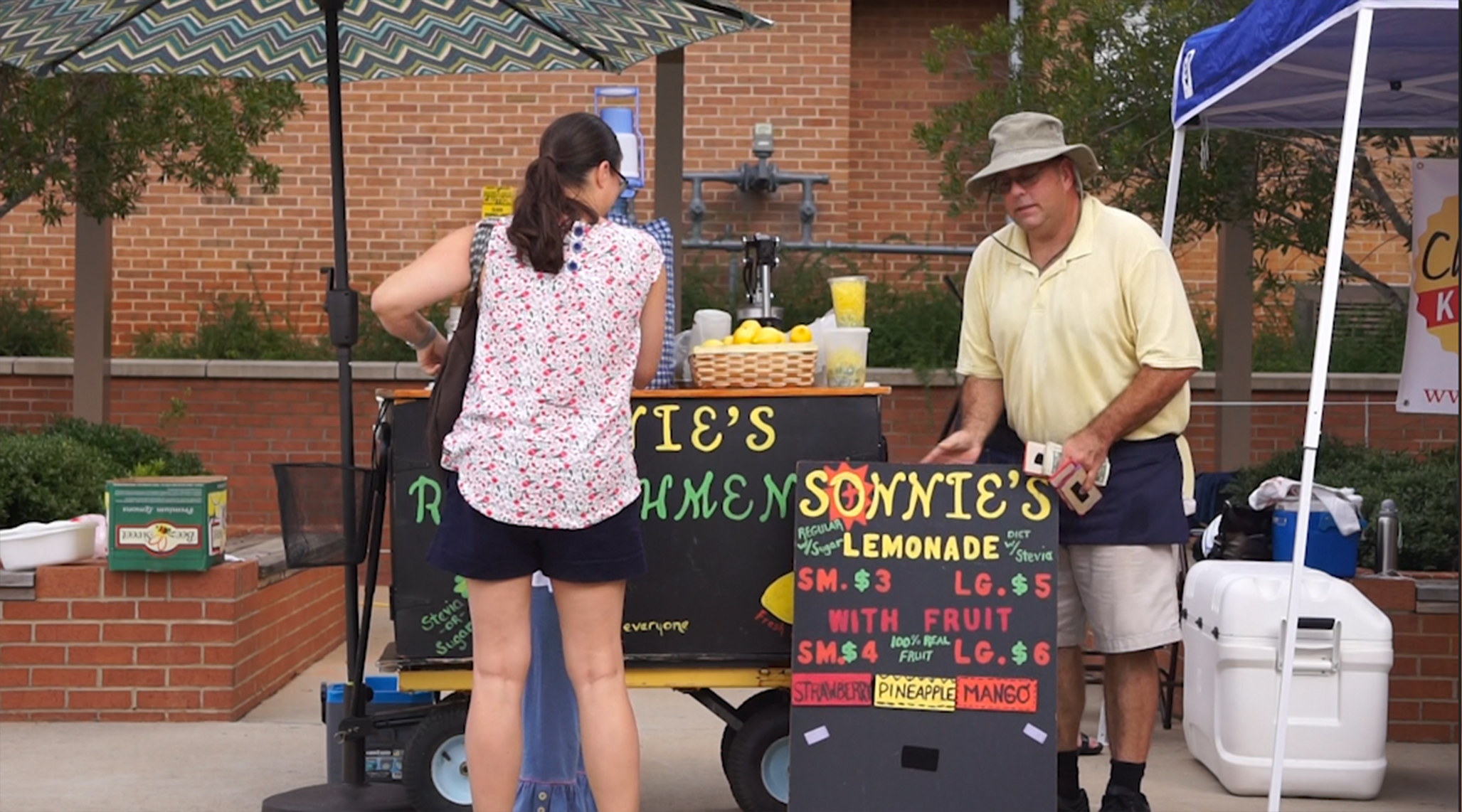 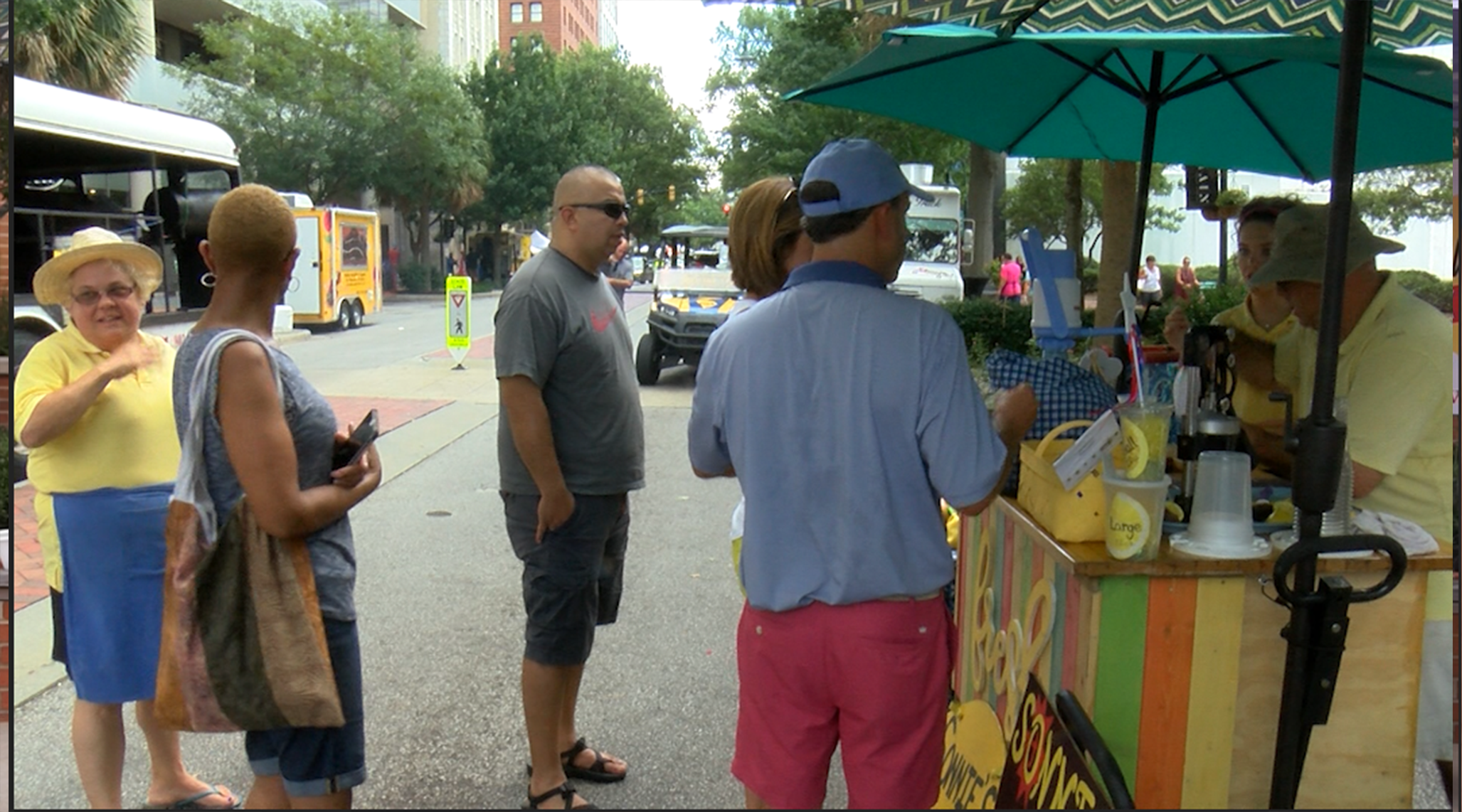 Allison and Ken hard at work 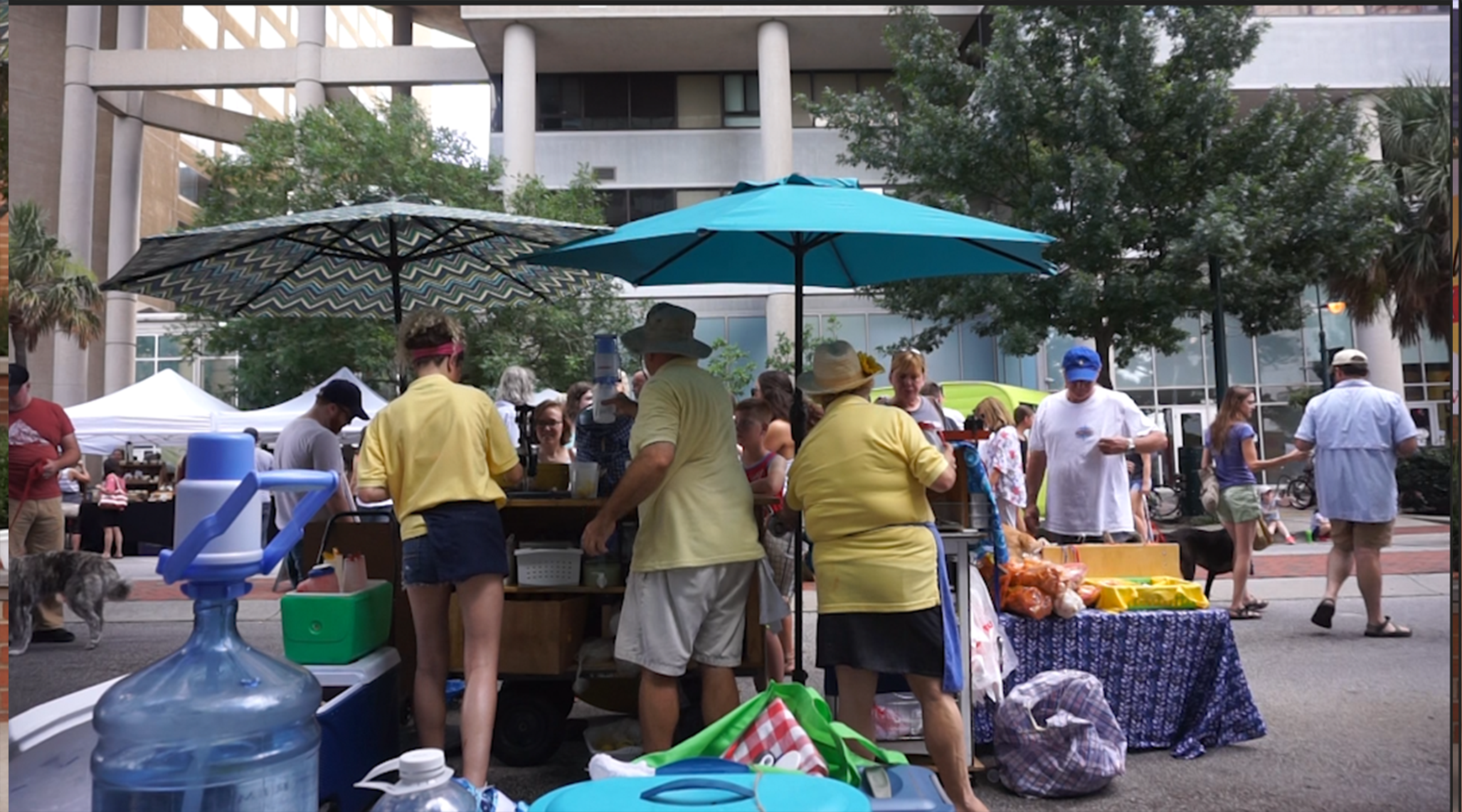 Soda City Market can get pretty busy at the stand!

Kenneth Burke stands by his lemonade cart every Tuesday, Wednesday and Saturday, selling his sweet refreshments mixed with mango, strawberry and pineapple along with pork skins of assorted flavors.

His wife, Allison Burke, joins him on Saturdays at the Soda City Market on Columbia’s Main Street where they set up shop at Sonnies Refreshments across from The Hub apartment complex to sell their goods to eager consumers.

For the past year, the stand has become a lifesaver for the Columbia couple who count on it to sustain them.

Initially, the lemonade stand started as a way for Allie and their daughter to pass the time and make a little money on the weekends, but when Ken lost his job as a deli manager at Publix, the stand took on another role. Ken started working full-time with lemonade, going to markets during the week and doing paperwork on free days. Now he has help after Allie built the stand and came up with the recipe that she developed from her brother’s refreshment business that operates in the Midwest.

Allie spends her week working for Lowes to receive benefits for her family, but the stand is still named after her.

The refreshment stand’s name was a play on Allison’s name.

“My nickname normally is Allie, but (because of the emphasis on) AlliSON I figured Sonnies sounded better for a lemonade stand,” Allie said. “And it also represents the Son of God to me because life has thrown a lot of lemons at us, but he has always sweetened it.”

Since Allie is diabetic, she wanted to offer lemonade that she would be able to drink herself. Alongside Ken, the two say they tried six different Stevia products to find the one that left the least after-taste and did not overtake the natural flavor of the drink.

Ken and Allie then took the drink mixture to a church fundraiser, where it was a success. Their friends from the congregation told them they needed to take their lemonade to the Soda City Market, and Allie looked into it. Within their first two weeks of going to Soda City Market, they were able to replace Ken’s previous income and spend more time together in the process.

“Soda City is a really great community, not only the customers but the other vendors as well. We are kind of like a little family always talking and trading between stands,” Allie said.

The Burke’s stand has been more than a sidewalk operation. Allie planned everything from the mobility of the cart and the size of the cups to the blue umbrellas attached that make them stand out while not breaking the rules requiring that all tents be white.

Soda City requires stand operators to pay $50 every week, Irmo’s market has a weekly $25 fee, and other fees vary by market operators.

The Burkes say they love putting in the work to keep their lemonade stand going. Allie says she loves how the vendor community really feels like a family to her, and other vendors agree. At the kombucha stand across the way from Sonnies, the operators say Ken and Allie allow them to go make their own lemonade as long as they ask first.

The Burkes have tried to use their experiences to help others. Through her work at Lowes, Allie met, Anthony Momah, an entrepreneur who is starting an ice company in Africa.

“The Burkes allowed me to come and see their operation at the farmers market,” Momah said. “I met Allie through contracting work at Lowes, and they have been very nice and taught me a lot.”

Momah spent time at Soda City Market as well as the Irmo farmers market, learning what he could from Ken and Allie so he could apply it to his ice and refreshments business in Africa.

A year after opening up shop at the farmers market every week, Ken said he has adjusted to the change. For her part, Allie enjoys working with her spouse and looks forward to retirement.

“As we work this company up, we want to take it on the road and travel,” Allie said. “When I do retire, maybe 10 years from now, we will be able to travel and take our lemony goodness all over.”