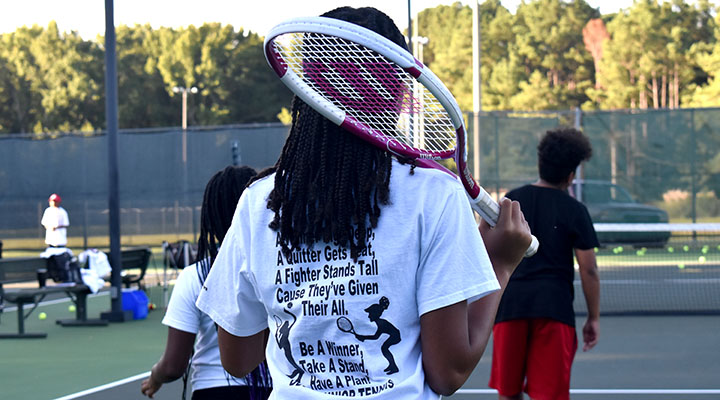 A DD&J Junior Tennis Foundation student holds her racket up while wearing the organization’s signature T-shirt. (Photos by Grace Tippett)

Crystal Haynie picked up her first tennis racket when she was 6 years old. Her family had just moved to Columbia’s Greenview neighborhood after relocating from St. Louis, Missouri, to be closer to her grandparents.

Every Saturday, Haynie and her siblings would walk from their grandmother’s house to the tennis courts at Greenview Park, where they would take lessons from a local husband and wife team. During these lessons, Haynie met her friend Shayla Williams.

Thirty years later, Haynie and Williams are still involved with that husband and wife team, hoping other young people in their childhood neighborhood will have the same experience they did. Williams continues to volunteer as a coach, while Haynie brings her nearly 6-year-old son to the same Saturday morning tennis practices.

“They’re literally woven into the fabric of my childhood,” Williams said. “I remember being so excited about Saturday mornings because I knew I got to go play tennis, and it was just the coolest thing in the world.”

The tennis organization is called the DD&J Junior Tennis Foundation. It was founded by Domino and Jackie Boulware and includes various volunteer coaches and board members.

The Boulwares have taught tennis in Greenview Park for 30 years, helping to bring the sport to the historically black neighborhood. Across the street from the park is Lewis Greenview Elementary School. Many of the school’s students live in the surrounding neighborhood and play tennis with DD&J.

Lewis Greenview is a Title 1 school in the Richland One School District. The purpose of the federal Title 1 program is to improve education in high-poverty schools. Greenview is also one of Richland One’s Additional Targeted Support and Improvement schools. According to the Richland One website, these schools receive additional federal funding and “are defined as any school with one or more subgroup of students performing at or below the 5th percentile of all schools in the state.”

For Williams, who now teaches at the school, the difficulties neighborhood children face are mirrored in the way they have to work on the tennis court.

“Tennis is 90% mental and 10% physical,” she said. “It’s always interesting to see the same kids in the classroom, you know, performing on the tennis court and learning those life skills and being able to bring them back into the classroom.”

The Boulwares, Columbia natives, started the tennis foundation in Greenview specifically because it was a “marginalized community.” The mission from the start was to reduce delinquencies, teen pregnancies and other social ills.

“I think at that particular time, it was just really hard for kids to have healthy experiences,” Haynie said. “Greenview is a great neighborhood, but it also has areas that sometimes are not the safest.”

Haynie says DD&J changed the culture of the neighborhood.

“It was a sight to see,” Haynie said. “African American children playing tennis like that wasn’t something that was a regular or normal thing. They really paved the way for us to have access to things that we typically would not have access to.”

According to U.S. census data from 2019, 81.7% of residents in Greenview’s zip code were Black, 33% lived in single-mother households and the majority of residents had less than a high school education.

The neighborhood was formed by and for African American veterans returning from World War II in the 1940s and ’50s as a result of the G.I. Bill. The act provided loans so World War II veterans could buy homes.

The couple say they have introduced the fundamentals of tennis to thousands of students. About 25 kids now attend practice regularly.

“We have quite a few tennis players go and play college tennis, and have professional jobs and are doing extremely well in society,” Domino Boulware said.

Greenview Park named one of its courts “Coach Domino’s Court” in his honor.

Barbra Pickering Jones, 81, has been part of DD&J since its 1995 inception, just recently hanging up her racquet after more than 50 years on the court. Pickering Jones serves on the nonprofit’s board, working mostly to secure funding.

“We want to make the best kid we can make through the game of tennis,” even though many of the students are in less-than-ideal situations, Pickering Jones said. “We have seen kids come with no baggage, basically no shoes, and they’ve gone on to play tennis. Through the foundation, into the local area, high school and college tennis.”

DD&J has plans to expand outside of Greenview park.

“We want to make this a citywide program,” Domino Boulware said.

Domino was recently hired as the men’s and women’s tennis coach at Richland Northeast High School. It’s his second stint as a high school tennis coach. As the coach at Dreher High School in the late 1990s, he led the girl’s tennis team to first place in the region for two years.

Domino says nurturing talent in high school can lead to scholarship opportunities for players in college, particularly at historically Black colleges and universities. “They are always looking for tennis players.”

Gerard Dash started playing for DD&J when he was 11 years old.

He’s now an adult but continues to serve the organization whenever he has the chance.

“We do have those young people who appreciate what we’ve done and are still doing,” Jackie Boulware said. “They often share how tennis has helped them overcome fear and challenges in life.”

Program participants spend a lot of time on the court, but DD&J brings an educational component to the program through guest speakers, lessons in empowerment and even a book club.

This summer was the second year DD&J hosted free summer camps for both boys and girls. Players were asked to read a book about Althea Gibson, the only Black women inducted into the South Carolina Tennis Hall of Fame.

Althea Gibson was born in Silver, South Carolina, and played tennis during the late 1940s and 1950s, a time when African Americans were not allowed to participate in most tournaments. Gibson’s talent made her the first Black person to play at Wimbledon and at the U.S. National Championship, now the U.S. Open. Gibson was the first Black person to win a Grand Slam, in 1956. She went on to win 11 Grand Slam titles on courts around the world.

Gibson, along with other famous African American tennis players such as Arthur Ashe and Venus and Serena Williams, is an inspiration to the Greenview program.

They “set the bar in terms of African American tennis,” said Domino Boulware, who was inducted into the state Hall of Fame himself in 2017 and is the only Black male inductee.

African Americans have been historically under-represented in the sport. Venus and Serena Williams are known as the best Black female tennis players since Gibson. The Williams sisters grew up in Compton, California, playing on public tennis courts similar to the courts in Greenview Park. Together, the sisters have won 30 Grand Slam titles.

When Domino Boulware was being inducted, Haynie, who works as a reading coach in the Richland Two School District, wrote a letter of support about the impact DD&J made on her life.

“I knew that her parents couldn’t afford private tennis lessons, but I gave her tennis lessons anyway – free lessons,” Domino Boulware said. “She thanked me for that, which really touched me. And she said that she wouldn’t be where she was in terms of teaching if I didn’t spend the time to give her tennis lessons.”

Haynie said playing tennis altered the way she sees herself and her abilities.

“It was able to bring us a different type of way of looking at athleticism and sports, where we can see ourselves as African American people in all arenas, especially in that particular neighborhood.” 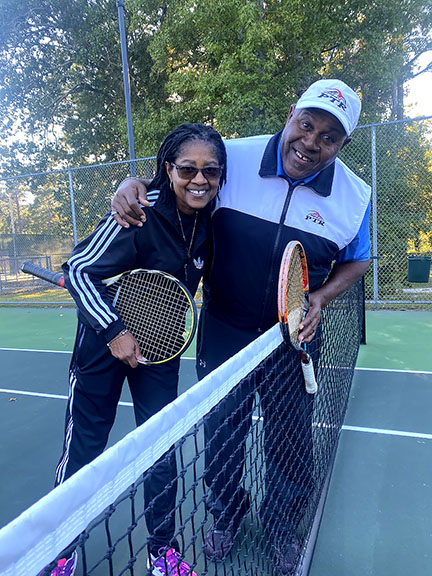 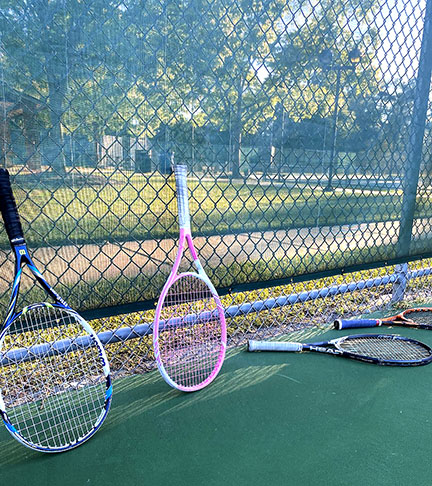 DD&J Junior Tennis Foundation players set their rackets against the fence while practicing at the Greenview Park tennis courts. 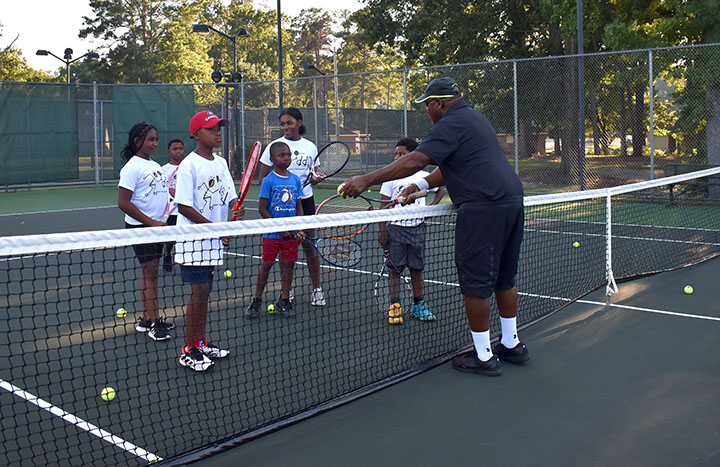 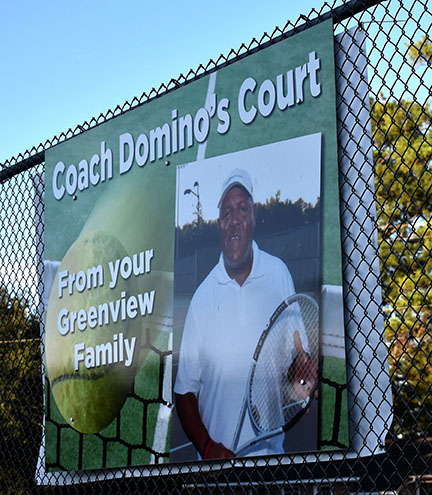