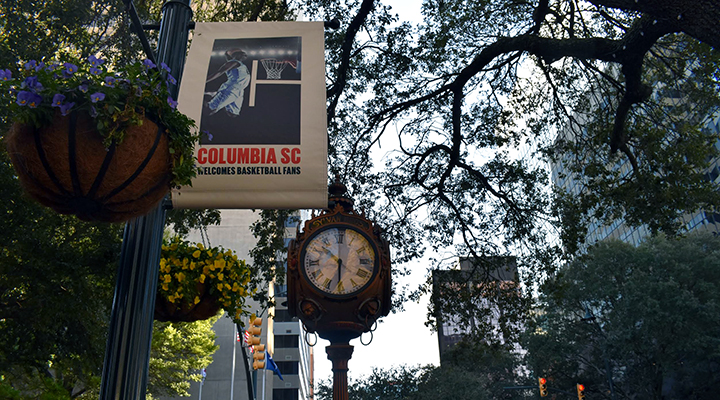 Kelly Barbrey, vice president of marketing and communications at Experience Columbia SC, says that Columbia has put up over 100 street banners around the city to welcome visiting basketball fans.

NCAA’s March Madness is coming to Columbia and businesses are ready to take on the basketball madness that is expected to draw 20,000 to 25,000 additional fans to the capital city.

After almost 50 years, Columbia will host the first and second rounds of the men’s college basketball tournament this weekend on Friday, March 22 and Sunday, March 24.  While top-seeded Duke is preparing to take on their unannounced opponent on Friday, Columbia is preparing for an onslaught of fans.

“What I really hope this does is turns it into something for future use, that folks see what a great community Columbia is and they want to come back,” said Carl Blackstone, president and CEO of the Columbia Chamber of Commerce. “Whatever that we have to offer in Columbia, I hope people enjoy it and say, ‘You know what? Columbia’s great, we wanna come back for a visit.’”

Blackstone said the economic impact of the tournament is huge, bringing in about $9 million in additional revenue from hotel and restaurant sales and other amenities.

Proprietors of restaurants in Columbia’s Vista near the Colonial Life Arena say they are excited to take part in the festivities.

“We’ve definitely had big events, obviously Saint Pat’s, stuff like that, but this is completely different. A bigger scale, especially when you’ve got a team like Duke,” said Wild Wing Cafe Kitchen Manager Joey Windell. Windell said the Vista location is pulling employees from its Sandhills location and are stocking up to ensure everything runs smoothly.

Hotel Trundle, a local business in the Main Street District, and other hotels are collaborating with Experience Columbia SC, the tourist information center, and the NCAA, to both promote the tournament as well as promote their space for visiting fans.

Hotel Trundle owner Marcus Munse says his business is expecting a high turnout for guests this weekend. “Yesterday, when the teams were selected, I think we gained about a 25 percent growth already, just from that.”

“We’re excited to have everybody here,” Munse said. “People are seeing Columbia in maybe a new light and we’re getting people here that maybe haven’t come to Columbia before and we can showcase the city.”

“It’s our job to make sure we represent the city well and we hope people really love their stay,” he said.

Munse said NCAA must approve everything used to promote the tournament, from the use of the term “March Madness” to the NCAA shade of blue.  “We’re getting items like pop up posters and banners and table cards,” he said.

“We worked on a number of décors,” Barbrey said. “We put up over 100 street banners and we handed out posters to restaurants, breweries, hotels and other businesses.”

Barbrey said that community meetings were held for businesses like Wild Wing Cafe and Hotel Trundle, covering potential areas of concern like parking and shuttle services, safety and security, media and press, advertising and the economic impact.

“We discussed everything that could maximize the experience for visitors staying in Columbia,” Barbrey said. “It’s a wonderful opportunity for the whole community. This will really put Columbia on the map.” 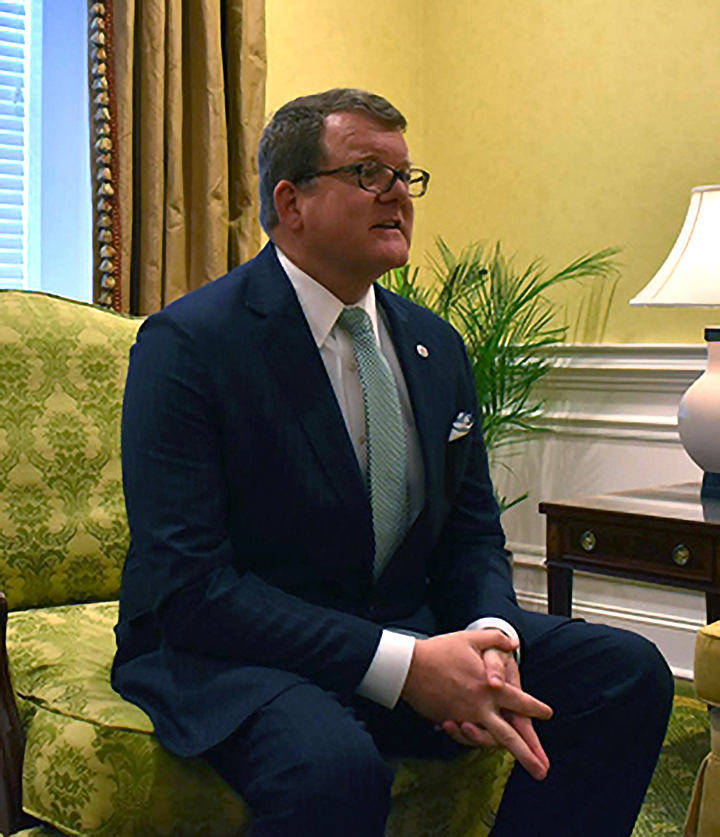 “This is a big opportunity for Columbia,” said Carl Blackstone, president and CEO of the Columbia Chamber of Commerce. “We expect somewhere between 20 and 25 thousand people coming in just for this weekend.”

Restaurants like Wild Wing Cafe in the Vista are using deals such as their “triple dipper” appetizer plates to promote their business during March Madness weekend in Columbia. 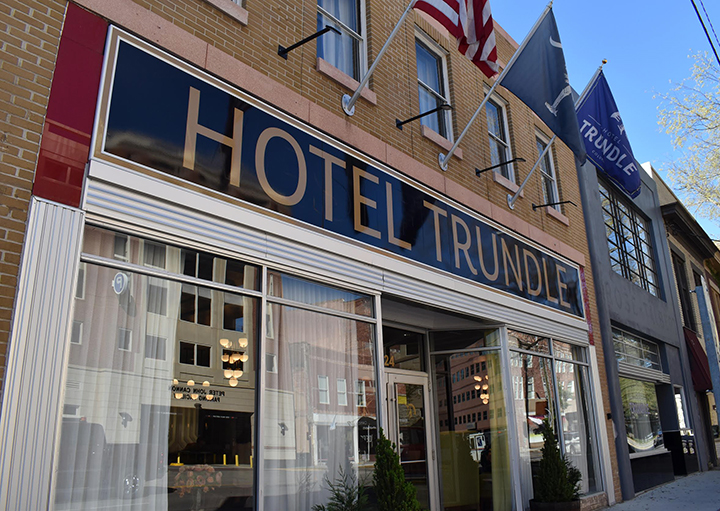 Marcus Munse, owner of Hotel Trundle on Taylor Street, says they are five rooms away from full capacity and are expecting to be full by this weekend. 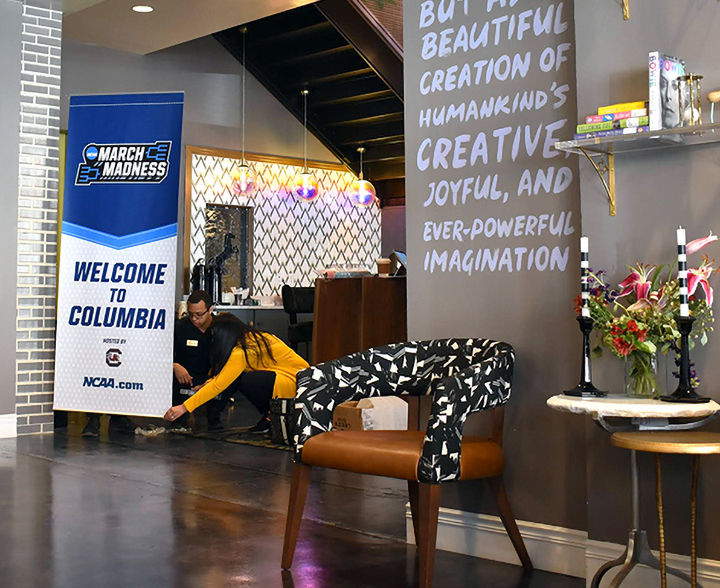 NCAA music approved everything being used to advertise the tournament, from the use of the term “March Madness” to the shade of blue used. 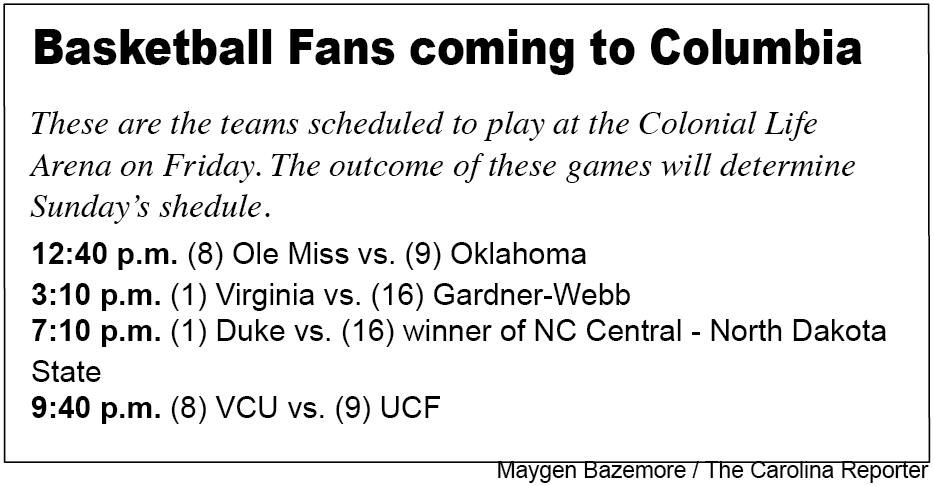