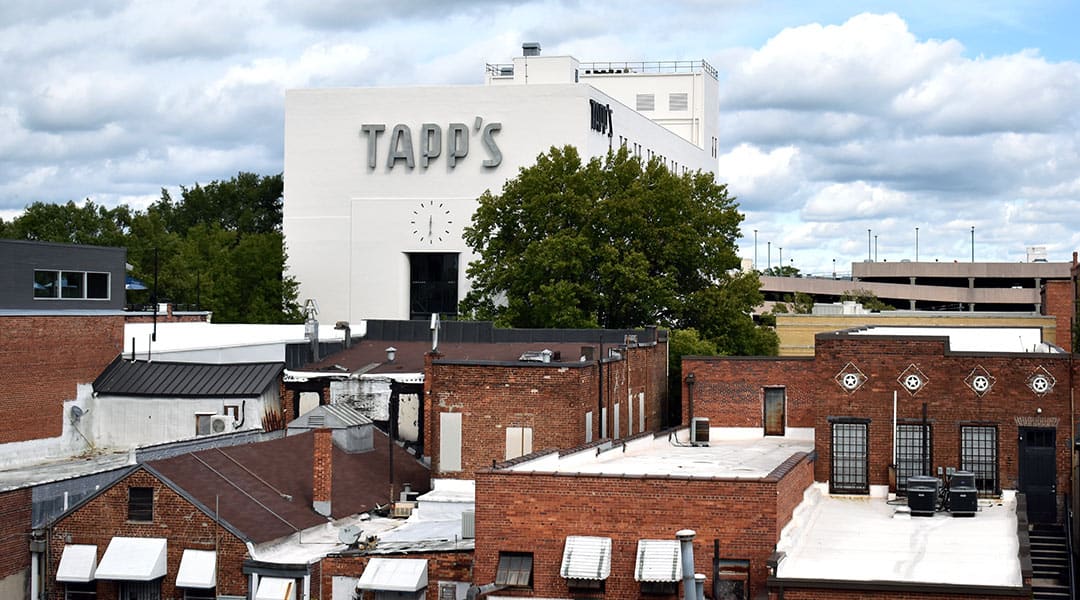 The Tapp’s building on Main Street has been an iconic landmark since the 1930s and the modern-depression style facade has remained relatively the same throughout the years.

Tapp’s Art Center, a collaborative space with individual artist studios that houses a wide variety of arts, is moving from Columbia’s Main Street at the end of the year, leaving 30 local artists with one less opportunity to front their own studios and display their work.

The art organization is vacating Main Street’s 1930s-era landmark skyscraper and is, in a way, a victim of Main Street’s success, with its rising rents and its growing popularity as the city’s cultural heart.

Caitlin Bright, executive director of Tapp’s Art Center, said the loss of a city arts grant hastened the center’s demise, but she expects a core group of artists to carry on the mission in a new location.

“This ended up being a positive because of the overhead in this beautiful, old decaying building,” she said.

For over 90 years, the Art Moderne style building at the corner of Marion and Main Streets was home to Tapp’s Department Store. Generations of South Carolinian shoppers experienced the modern, air-conditioned four-story department store that operated until 1995. The store’s slogan, “Meet Me at Tapp’s,” described the era of elegant department shopping, that not only included a wide range of merchandise like luggage, cosmetics and shoes, but it even had a restaurant in the basement. The slogan remains painted on the back of the building today.

In 2003, the building was renovated to loft-style apartments which remain in the upper levels of the building and are now managed by Capitol Places. Tapp’s Art Center moved into the ground floor and basement years later in 2011.

Recently, Main Street has undergone a downtown renaissance with new dining and retail options, and community-focused events like the weekly Soda City Market, which draws hundreds to the Saturday food and crafts street market. Mary Catherine Kunze, owner of Uniquely MC Handbags who has rented a Tapp’s studio for the past five years, thinks that Tapp’s Art Center played a roll in the area’s success.

“When Tapp’s opened, I know this block wasn’t as desirable. There weren’t as many businesses down on this end and I really think that Tapp’s helped revitalize Main Street,” said Kunze.

The artists have benefitted from the increased foot traffic to the area, due to reoccurring events like First Thursday on Main, that bring life to Main Street through entertainment and restaurant specials.

First Thursday gave the artists the opportunity to showcase their work in a mini-exhibition at Tapp’s, said Ron Hagell, a multidisciplinary artist, filmmaker and photographer who has rented a space in Tapp’s since 2014. He said he also thinks Main Street has taken off because of Tapp’s role in First Thursday and the event won’t be the same without the local Tapp’s artists.

“It’s doubly sad in a way because we’re losing our work spaces and things, but the city is also losing too,” said Hagell.

Lee Snelgrove is the executive director of One Columbia, a non-profit organization that advocates for art and history within Columbia. He said it’s a loss for Main Street to no longer have a collaborative space where many different types of art forms collide.

“Tapp’s was there when the 1600 block became successful, but then that also contributed to the fact that that space became more valuable than what Tapp’s could afford,” Snelgrove said.

Bright requested a $50,000 hospitality tax grant from the city of Columbia to cover programming and advertising costs and was given less than $8,000 for the year. Since the organization did not receive enough money to cover those costs, it had to borrow from its operating budget that was used to pay for the space, therefore making it difficult to afford rent.

“There’s backlash every time I say it, but we weren’t supported by the city,” Bright said.

Snelgrove said it’s unfortunately common for art organizations in any city to be priced out, but hopes the closing of Tapp’s will inspire further thought from Columbia residents and leaders on the role of arts in the city.

The future of the old Tapp’s building has not been announced. Tim Hose, president and CEO of SYNCO Properties, the company that owns the Tapp’s building, said they are in serious discussions with a prospective tenant. He said he could not disclose specific information about what will go into the ground floor and basement of Tapp’s until the lease has been signed, but he’s hoping to finalize a lease in four weeks, begin renovations at the end of the year and reopen mid-2020.

Hagell said what Main Street is losing with Tapp’s Art Center will be replaced elsewhere because there is a core group of artists who are willing to travel with the organization when it relocates.

“It’s kind of an attraction that there’s a group of artists who are the ‘Tapp’s artists,’” Hagell said.

Bright said the organization’s name will change when they move buildings. The new name will include “Tapp’s,” but that part will eventually phase out as the new name becomes more recognizable.

Although Bright said she planned on moving at some point, the news of the organization’s relocation came suddenly and the timeline was moved up. Bright said she is still working to finalize aspects of the move to ensure a smooth transition to a new location.

“The community we built has been amazing, but we realized this space is amazing because of the people here and not because of the footprint,” Bright said.

Some artists saw Tapp’s move as an opportunity to branch out on their own. Ashley Moore, former operations director at Tapp’s and renter with her dance studio Movement Arts Co-Op, decided to move out of Tapp’s after the announcement.

“It was something that I had been saving for the possibility and it just seemed like the perfect opportunity to transition over into owning my own studio,” Moore said.

Even though Moore had been preparing to move, the timing was sudden. She was able to quickly purchase a studio in West Columbia which is a more affordable space than one in downtown. Her vision for Sage Studios is to have shared spaces for other artists and a retail area, along with the dance studios.

Columbia’s art landscape differs from other cities because there is not one central arts district. Instead, the arts are scattered throughout the city. Snelgrove said he doesn’t see this dispersion of arts as a disadvantage.

“I think that’s actually overall more positive for the whole city because then that sort of arts and cultural development happens in a lot of different places and everybody can kinda interact with it,” Snelgrove said.

He pointed to artists who live and work in Rosewood and show their work at the annual Rosewood Arts Festival, as well as in North Columbia, across the river in West Columbia and in the Vista. He said this gives each area the opportunity to retain its own identity and create different styles of art.

This also means there is not a mass of artists moving to one area, so even though Tapp’s is leaving Main Street, a stable arts scene will likely remain in the area, especially with the Columbia Museum of Art located less than two blocks away. Bright said the art scene on Main Street will stay, but the tone might be altered a little.

“It’s like the arts on Main Street dyed its hair,” Bright said. “It’s still the arts, it just has red hair now.”

Snelgrove said there is a demand for the arts and for spaces similar to Tapp’s where local artists can rent studio space, work and display their art. He said that is the main loss for the local arts community.

“We just don’t have enough of that kind of space and so I think that that’s the big need in any of those parts of the city,” Snelgrove said.

As for the future of the art organization, Bright is looking to announce the new location and other plans in the coming weeks.  She said members of the organization are being “big hippies” and are trying to stay positive about everything.

“Things move and morph and transform and let’s all just celebrate it because we’re all constantly moving forward anyways,” Bright said. 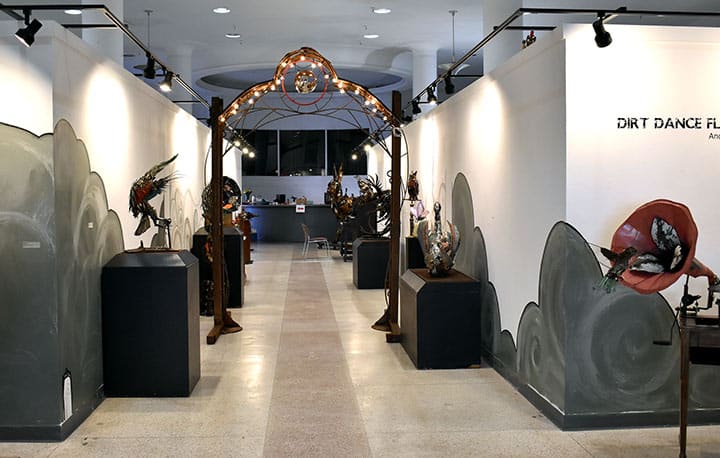 Tapp’s Art Center is located in the street-level floor and basement of the building and includes 30 individual artist studios, recording studio space and a live music venue. 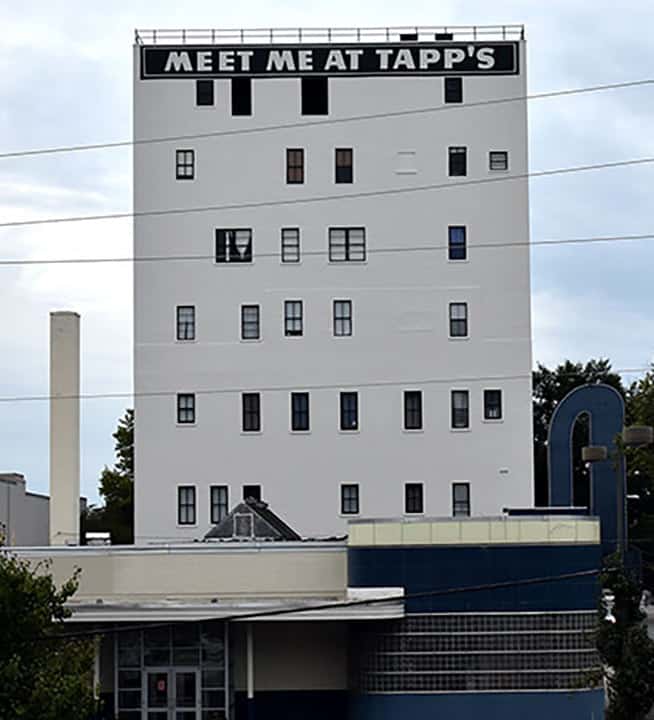 “Meet Me at Tapp’s” remains painted on the back of the building and was the slogan for the department store that was located in the building for more than 90 years. 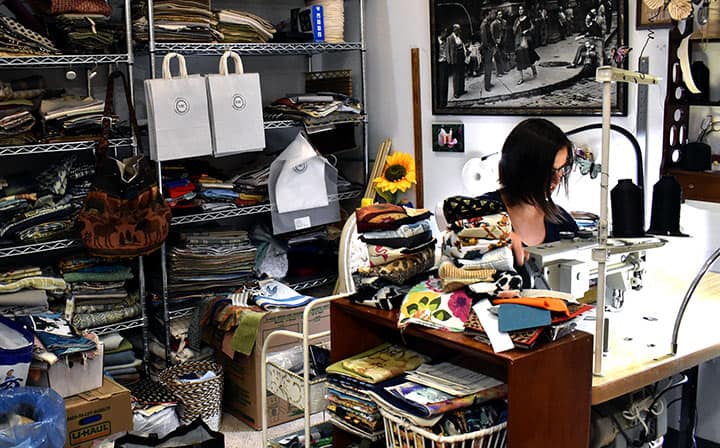 Mary Catherine Kunze, owner of Uniquely MC Handbags, is planning to move with other Tapp’s artists to the new location. “There’s so much in the air, but hopefully it means something more exciting for the future,” she said. 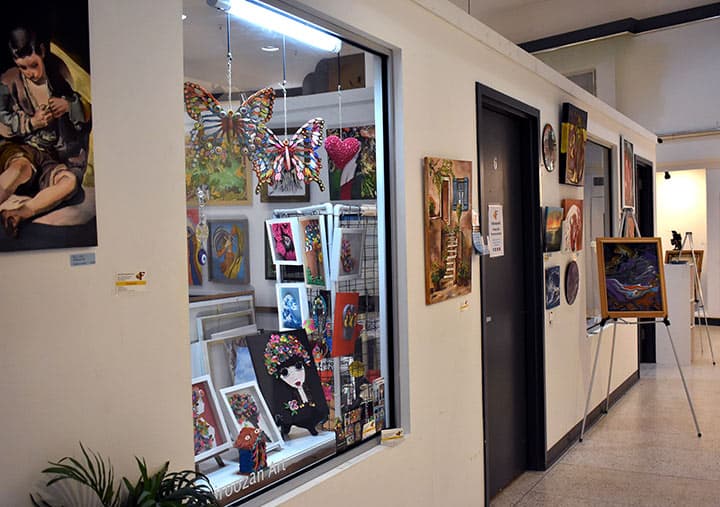 Tapp’s many individual studios allow for artists to display their work and interact with visitors.