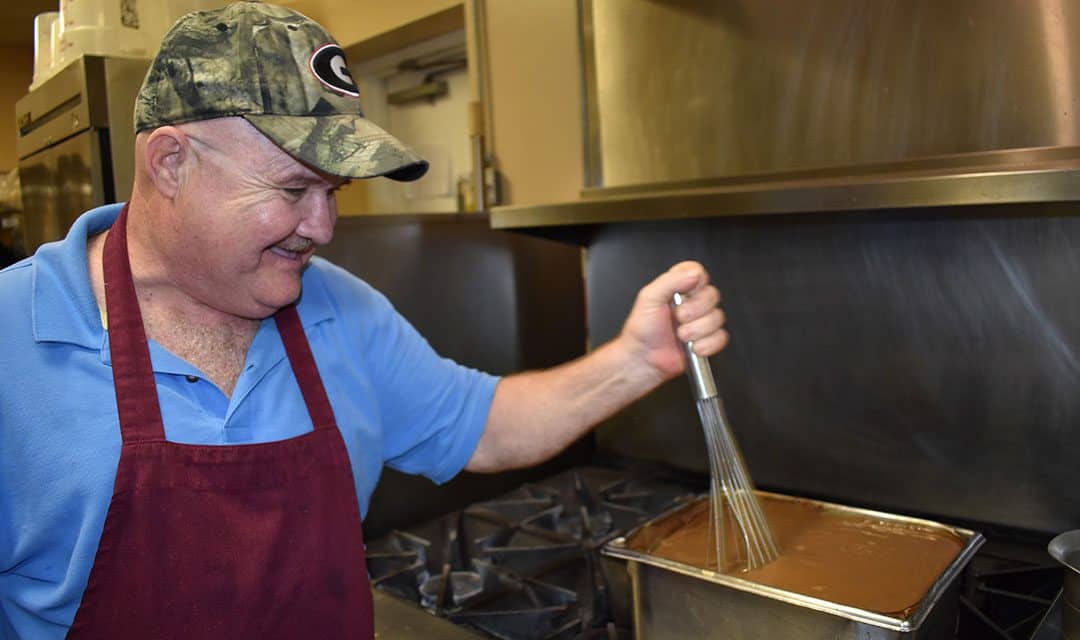 Mark Brown started his new job as a cook in the Oliver Gospel Mission kitchen in August 2019.

Twenty years after Mark Brown committed a double armed robbery in Greenwood, South Carolina, the former drug addict and alcoholic is back at the Oliver Gospel Mission, only this time he’s cooking in the kitchen and helping others receive the guidance he once needed so desperately.

It took him three separate attempts to successfully complete the mission’s six-month recovery program, but here he is 11 years later offering a hot meal, an encouraging word or a helpful Bible verse to the homeless and the down and out because he knows the struggles they’ve seen. Along with his testimony, Brown is spreading an infectiously optimistic attitude.

Brown served eight years in prison for robbing two gas stations in his hometown. He hoped to steal enough money for about five grams of crack cocaine, his drug of choice at the time. He said back in those days he could go through that much in an hour or two, but what brings him joy now is much different.

“I just wanted to live a wild and crazy life. I thought I was having fun, but really, I wasn’t having any fun when I sit down and look at it now,” Brown said. “I saw there was no life in the way I was living. My children didn’t want much to do with me and I wanted my kids back in my life. I knew I had to change.”

Since his time behind bars, Brown has relied heavily on his Christian faith to resist temptation and create a new purpose for himself. He got involved in the prison’s Bible studies early into his sentence and began teaching other inmates four years later.

He’s only three months into his new job, but Brown’s comeback story has already influenced men in the mission’s six-month program that helps them recover from addiction and homelessness, start careers and adjust into society.

Lee Ball, who is currently going through the program at Oliver Gospel Mission, said having someone around who has been through similar experiences makes all the difference in his recovery. Ball said he thinks since Brown has his own sobriety story, he has compassion for pulling others out of the “quicksand” that is addiction.

“In this environment, a lot of us are still struggling. Maybe we’re not quite there yet, we’re just going through the motions. That can be discouraging to people when you’re really trying, to have that negative cloud around you,” Ball said. “But you’ve got this positive guy constantly coming through throughout the day.”

Ball said Brown has been helping him remain on the right track by introducing him to the Bible, praying for him and calling him out on his missteps. When Ball is overwhelmed with anger, Brown de-escalates the situation with verses from his pocket Bible. It was given to Brown during his first trip to the mission in 2008 and he still carries it with him everywhere he goes.

“You know you can rely on him and he’s very fun to work with. His ‘Woo!’ all day. It really helps to get that mentality going,” Ball said. “To see somebody who’s been stuck in that negative rotation be able to stop and make it positive somehow, that gives me all the hope. If he can do it, then any of us can do it.”

The “Woo!” Ball is referring to is just one of Brown’s many catchphrases he repeats throughout the day. If you ask him how he is doing, he is more than likely to respond with “Blessed by the best, even in my mess.” When something good happens to him, you’ll hear a “Good googly moogly!”

Since his return, Brown, who earned the childhood nickname of “Spanky” for stealing his grandmother’s pies and getting repeated spankings, has been welcomed back by residents and staff of the mission and the homeless population in the area.

“The first time they saw me back they said, ‘Spanky, what did you do now?’ They thought I got in trouble again. I said, ‘No, I’m on the payroll this time.’ You ought to have seen how their eyes lit up.”

He stays on top of those he sees struggling, making sure they’re spending their time and money wisely. If they want help, Brown said he’s available 24/7 to have a conversation.

“All of them know where I live. I say, ‘Hey, I’m willing to help you. Instead of doing things that you know will get you in trouble, come on and talk with me,’” Brown said. “We’ll go to McDonald’s and get some coffee, eat a hamburger or something. Matter of fact, I’ll cook you something at the house. We’ll sit down and do a good Bible study.”

Brown said it feels marvelous and gives him peace of mind to be able to use his experiences for the greater good, but that these people can only transform their lives if they decide and commit themselves.

“Nobody can do it but them. I can talk with them, I can be a witness to them, I can give them money, feed them and all that. But if you don’t really get in your heart and your mind that you want to change, you’re not going to change,” he said.

Keeping good company instead of hanging with old and problematic friends, getting a job, managing their money well and becoming involved in a church are some of the suggestions Brown gives to men at the mission looking for advice.

To make strides in his own right, Brown has been taking it one step at a time. During his third stay at Oliver Gospel Mission, he secured a dishwashing position at a restaurant that would allow for him to save up for his own apartment.

Brown’s most recent accomplishment is getting his driver’s license back, but his favorite is reconnecting with his three children and meeting his three-year-old grandson, William, for the first time. Regaining a relationship with his family is his strongest motivation.

Future personal goals include getting his GED and a pickup truck – and, strangely enough, returning to prison.

“I want to go back to Kershaw [Correctional Institution] and let them see me. Go to Kershaw and let them guys know, ‘Hey man, look at Spanky. That man’s doing real good.’ That’ll encourage them and make them really stay with it.”

Brown wants to go back as soon as he can to talk with inmates and inspire them to turn their lives around, and he said he would visit any prison that would have him.

“I want these guys to know that we can make it out there,” he said. “All of them [at the mission] know I’ve been in there a few times and they know the man I used to be, and they see how much I’ve changed. They tell me that I’m a good experience for them because of how things are coming together for me.”

As for Oliver Gospel Mission, Brown plans on working in the kitchen until “the good Lord takes [him] home.” At 61 years old, Brown said he is going to live 60 more. 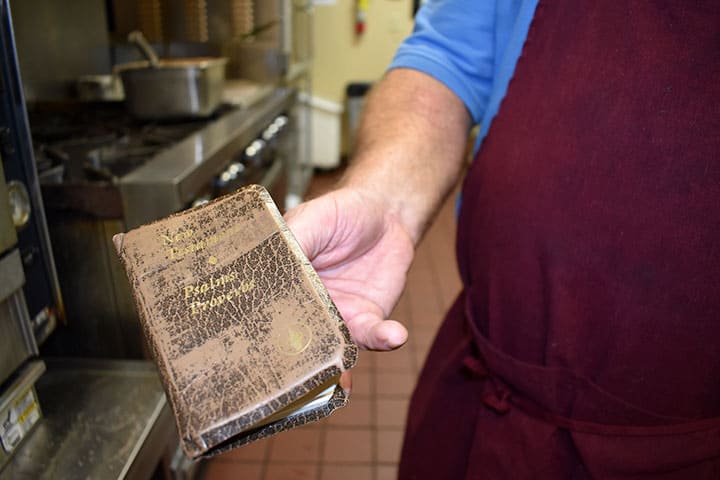 Brown carries his small Bible in his pocket everywhere he goes. He frequently refers to it throughout the day to read verses. 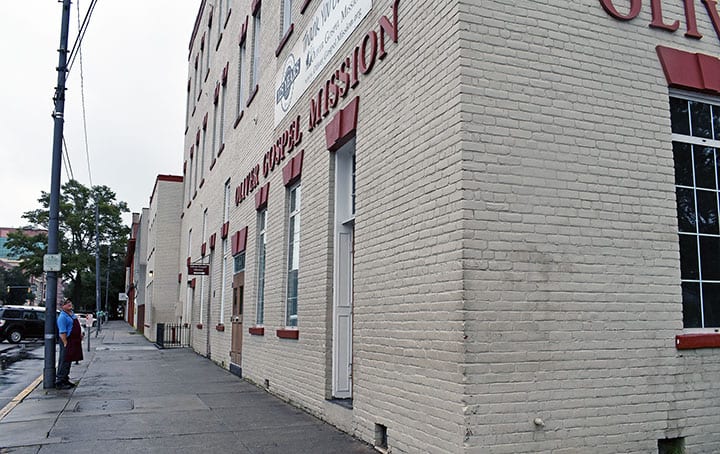 This is Brown’s first time coming back to Oliver Gospel Mission as a paid employee. He said he’s here to stay as long as possible. 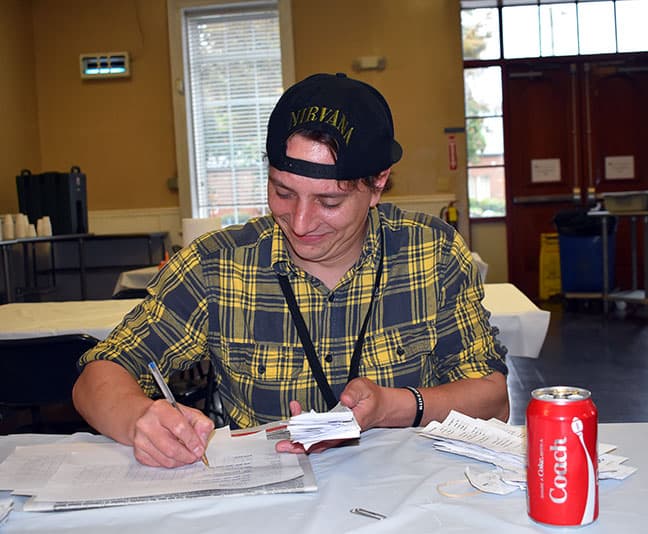 Lee Ball is a current resident in the mission’s six-month recovery program. Ball says that Brown is a positive influence in his life. 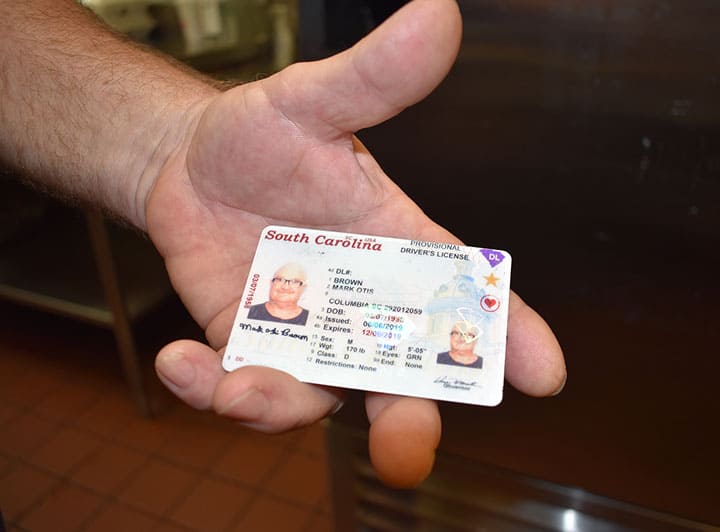 Getting his driver’s license has been a major part of Brown getting his life back after prison. One of his next goals is to buy a truck.