McCaskill leaves her jersey better than she found it 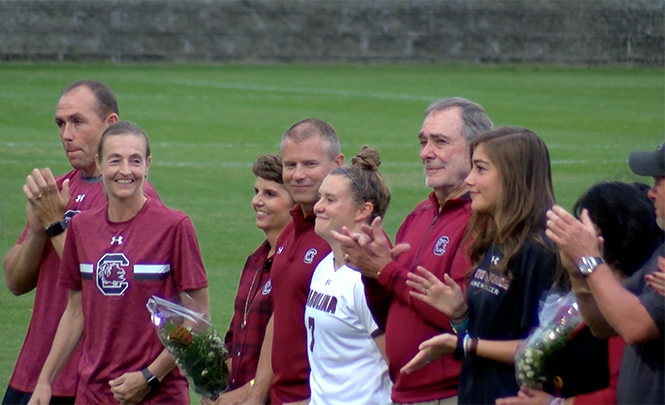 McCaskill was honored at the last home game at USC. 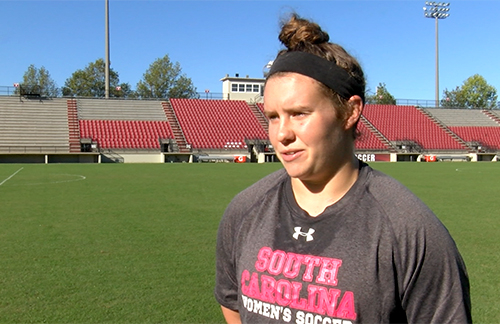 McCaskill states her hard work during practices pays off during the matches. 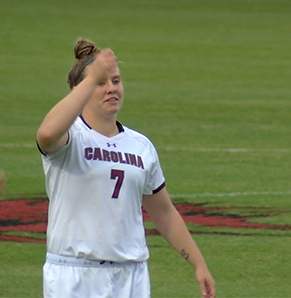 McCaskill has been one of leading scorers for USC’s women soccer team for two years.

Over the past four years, soccer forward Savannah McCaskill is a name that all Gamecock fans know very well. But as the regular season has ended and as South Carolina eyes the post-season, McCaskill realizes her time at USC is coming to a close.

The South Carolina native grew up watching the Gamecock soccer program, and was coached by USC head coach Shelley Smith on her region team. So when it was time to make a college decision, McCaskill had little difficulty.

“I had known Shelley for a while — I had her as a region team coach growing up — so I purely knew what she stood for and what she believed in and then being able to come and visit,” McCaskill said. “And being from here I grew up watching South Carolina play, so just buying into that culture and seeing what they can do here.”

It didn’t take long for McCaskill to find her place in garnet and black. She said she wanted to go to a school where she could immediately make an impact. The coaching staff saw the ability in McCaskill and was ready to give her that chance right away.

“Honestly, we recruited her as a defender initially. And when she came into the program we put her up top because she was creative and had the ability to score goals,” Smith said. “And she’s just blossomed there and obviously been one of the best forwards in the country.”

McCaskill has certainly made herself known among both Gamecock fans and soccer fans around the nation. She’s earned numerous accolades, including SEC Freshman of the Year, two-time Offensive Player of the Year, three-time All-SEC first team, NSCAA All-American first team, and a finalist for the CLASS Award.

“I wanted to go into a program that I cold make an impact right away and really just coming in and working hard and earning that spot from the get-go was a big goal of mine,”  McCaskill said.

The Gamecocks will take the field on Tuesday to start the SEC Tournament, and although her career here is ending, McCaskill isn’t ready to leave.

“This team has so much more to come this season so it’s kind of, I don’t want to look forward to leaving at this point. But it’s going to be so weird not coming back and preparing for games at Stone Stadium,” she said.

But whenever her college playing ends, McCaskill looks to continue her soccer career. She traveled with the USA team this summer and is the current captain of the U-23 team. She is now preparing for the draft as her next step.

“It’s always kind of weird, like you don’t know where you’re going,” she said.”But it’s definitely going to be an exciting opportunity.”

Smith talked about how special it is to see McCaskill’s dreams starting to come true.

“We see it in kids, do they want it? And all credit to Savannah to take the opportunities she’s been given and maximize her potential. And we’ve had players in the past that maybe don’t get there because they don’t have that same drive and attitude, but that’s been her attitude,” Smith said. “So I’m thrilled for her and excited for how she’s represented our program.”

As for now, McCaskill is enjoying her final minutes with her team and hoping to get as far as possible. She hopes she can continue to leave a legacy for Gamecock fans to remember after she’s gone.

“We talk about leaving our jersey better than we found it, so I like to think I I left number seven better than I found it and left an impact on this program to grow on the next years to come,” she said.