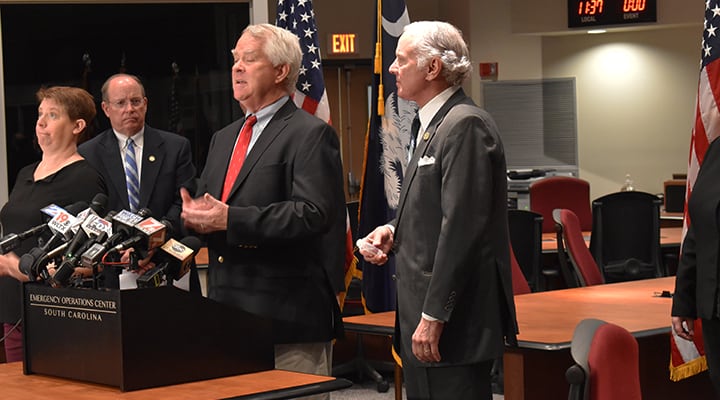 Gov. Henry McMaster, right, issued a stay-at-home order Monday for South Carolina residents as more cases of the coronavirus are reported in the state. Here, he is pictured at a March 2 news conference when he first addressed the coronavirus pandemic.

The order requires South Carolinians to remain at home unless traveling for work, visiting family, recreating outdoors or obtaining necessary goods such as groceries. South Carolina is now the 42nd state to issue such an order in the wake of the coronavirus pandemic.

McMaster said that due to a rise in the state’s infection rates and lack of adherence to social distancing orders, it was a necessary move to protect the health and wellness of South Carolina residents. However, he has been criticized by health officials and the general public for not issuing this order sooner. McMaster said he held off because he did not believe the act was constitutional until there was a greater risk.

In the last week, South Carolina’s coronavirus rate of infection has jumped from 90 to 182 new cases per day. The states total number of confirmed cases is now 2,232, according to state epidemiologist Dr. Linda Bell.

McMaster has also issued capacity limits for businesses, allowing no more than five people per 20,000 sq. ft., or 20% of the space’s usual capacity, whichever number is smaller.

Law enforcement officials will patrol public spaces and check businesses to ensure the new mandates are being followed. Failure to adhere to the ordinances will result in a misdemeanor charge resulting in up to 30 days in jail and/or a $100 fine per each violation.

These orders do not apply to church services. With Easter Sunday approaching, the governor asked churches to hold services online or outdoors. If neither of those options are viable and services must be held inside, McMaster requested that congregations adhere to social distancing and seat churchgoers at a distance.

McMaster also urged the General Assembly to return to work on Wednesday as planned.