The kids are all right: E-learning in the COVID-19 age 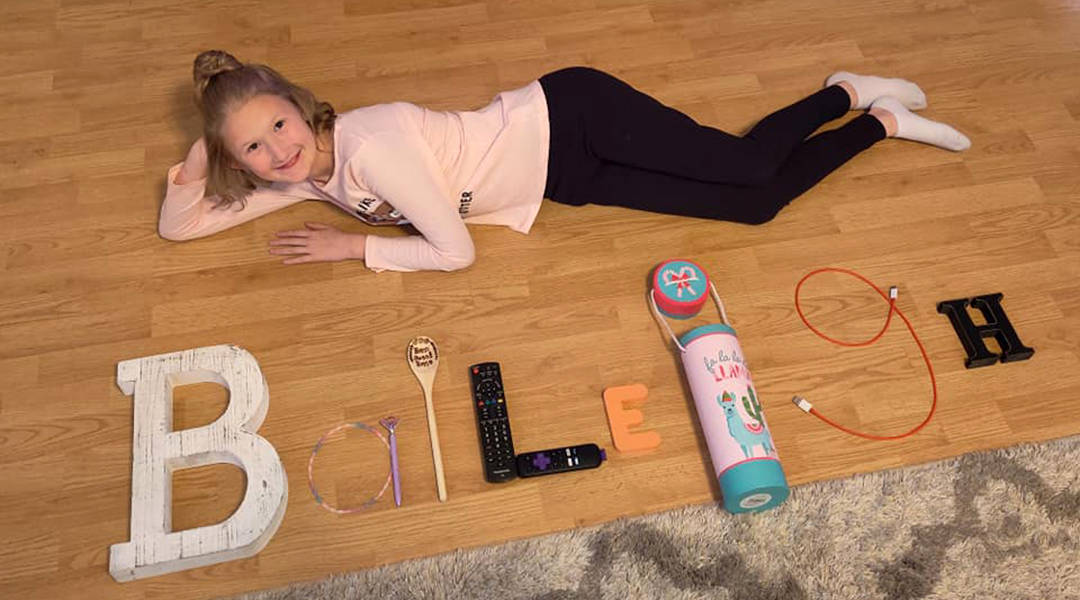 Fifth grader Baileigh Vaughn now completes all her schoolwork online because of COVID-19. One assignment she recently had was to make her name out of household objects.

It’s 8 a.m. Wednesday, and 16-year-old Lacey Boozer is getting ready for school. The high school junior brushes her teeth and heads out the door – her bedroom door, that is. Because of COVID-19, Boozer now completes her schoolwork online, sitting in her home office or living room.

“I stayed up until 11:40 p.m. last night answering one of my teacher’s questions that he posted at 7 p.m.,” Boozer said. “They feel like we have more time but we don’t. We do, technically, but it’s really hard to work at home.”

Adjusting to completing work without face-to-face lecturing has been a challenge for Boozer and her friends. Boozer said teachers sometime assume that students have more time in a typical day to finish assignments, when that’s not always the case.

“I think everyone was OK when they heard that we had two weeks, but everyone’s freaking out now that we have a whole month,” Boozer said. “We’re not getting the lecturing time that we usually get, but our workload is staying pretty much the same.”

Boozer and her friends have been able to lean on each other for help completing assignments and for limited social interaction. Although some of her more introverted friends love online school, Boozer and her classmates acknowledge the learning curve that accompanied the switch to e-learning.

“Most classes have changed drastically,” Boozer said. “AP physics is mostly hands-on learning and a lot of experiments, and we can’t really do that when we don’t have the resources at home.”

Boozer’s AP exams will now be online, only consist of free response questions and have a time limit of 45 minutes. She’s concerned that online testing will make cheating easier, resulting in inflated scores.

“They’re trying to make it so that you can’t cheat, but I doubt they’ll be able to do that,” Boozer said. “I think that within 10 minutes of having the test out, someone will have gotten the answers and copied it to the internet.”

COVID-19 has also affected Boozer’s participation in sports and extracurricular activities. She’s still hopeful that her May 31 prom will be unaffected, but as a track and field athlete, she is currently missing the peak of her season.

Her team has been conditioning since September 2019, but their meets are now canceled through the end of April. Boozer is worried that she won’t get another chance to display her months of hard work.

“I’m pretty sure the entire season’s canceled at this point,” Boozer said. “The end of April going into May would be our state championship, and they can’t just jump into a championship randomly. So, it really stinks.”

“The first day was a whole mess,” Vaughn said. “I started at 8 a.m. or 9 a.m. and got done at 7 p.m. or something. The computers weren’t working; they were shutting down, and I was having to start all over again.”

Since then, she’s settled into a new routine and has enjoyed completing assignments online. One way Vaughn demonstrates her knowledge of a subject is through Flipgrid, where she videos herself talking about a topic and posts it for her classmates to watch.

“You can add stickers, and you can explain the notes you took,” Vaughn said. “Then you get to take a selfie, and you can do the selfie however you want. You can watch your friends’ videos, and you can compare notes.”

Although Vaughn said it’s hard to not be able to ask her teacher at Bell’s Crossing Elementary School questions face-to-face, she’s enjoyed spending more time with her mom as her home teacher.

“My mom’s a good teacher; she does a good job helping me with stuff,” Vaughn said. “It’s not very stressful.”

Vaughn wakes up every day to start her work at 8 a.m. or 9 a.m. so that she can finish early in the afternoon. She also looks forward to playing with her new kitten, Pixie, at the end of her school days, which motivates her to get her schoolwork done.

As her final year in elementary school concludes, Vaughn is missing her friends, but still enjoys meeting them every day online through Google Meet. Her teacher also checks in with the students, performing a mental health check and asking them what they’re feeling as e-learning continues.

“I think it’ll turn out good,” Vaughn said. “I just hate the fact that I don’t get to go to school. I love school.”

For homeschooled kids, school’s the same but they miss seeing friends

Twelve-year-old Thomas Culbertson and his 10-year-old brother, Josiah, haven’t experienced very much change to their everyday life due to COVID-19.

“It’s been the same, basically,” Thomas Culbertson, a seventh-grade student, said. “There’s not much difference for us.”

Before stricter social distancing guidelines were enforced, the Culbertsons were able to see some of their public school friends more often because of the shift to e-learning. One of their friends spent two days with their family, completing his school work alongside the homeschoolers.

“I don’t think they have as much school to do,” Thomas Culbertson said. “He came over the first week of all this for two days. He had a little less schoolwork, but he’s doing school at home too.”

The brothers usually start school each morning at 9 a.m. after eating breakfast. Before coronavirus, they would spend Tuesdays attending their Classical Conversations meeting, a homeschool group. Now, this work is done online for a few hours, and it likely will remain that way until the end of the semester.

A typical day for high school sophomore Judy Benner starts when she wakes up around 8 a.m. and grabs breakfast. Although Benner is homeschooled, she normally attends Upstate Homeschool Co-op on Mondays and Wednesdays, which is now canceled for the rest of the semester because of the coronavirus.

That’s why after she eats breakfast, Benner heads back to her room and works quickly to complete her morning schoolwork.

Three of Benner’s five classes are honors, and she’s been self-teaching for almost three weeks. Almost all of her teachers have shifted to scheduling live video classes or have recorded themselves giving lectures.

“We don’t realize how much we rely on our teachers until now,” Benner said. “There’s certain things I just don’t understand that I can’t put into words on paper and sometimes that’s harder.”

Benner said her main adjustment has been not being able to leave the house. In addition, her cheerleading team had to cancel its spring tryouts, and the co-op combined all sports lettering ceremonies into one online event. However, Benner says she isn’t very stressed and is looking forward to future semesters.

“It’s not my junior year and I don’t have any college classes to worry about,” Benner said. “I know that this will be over by the time next school year starts, and I can go back. I’m feeling pretty chill about it.”

In her free time, she’s been making TikToks and spending time with her parents and two sisters. Before quarantine, they used to disperse to their separate rooms after dinner at night.

“We’ve played a game almost every night now,” Benner said. “We’ve all kind of come together.” 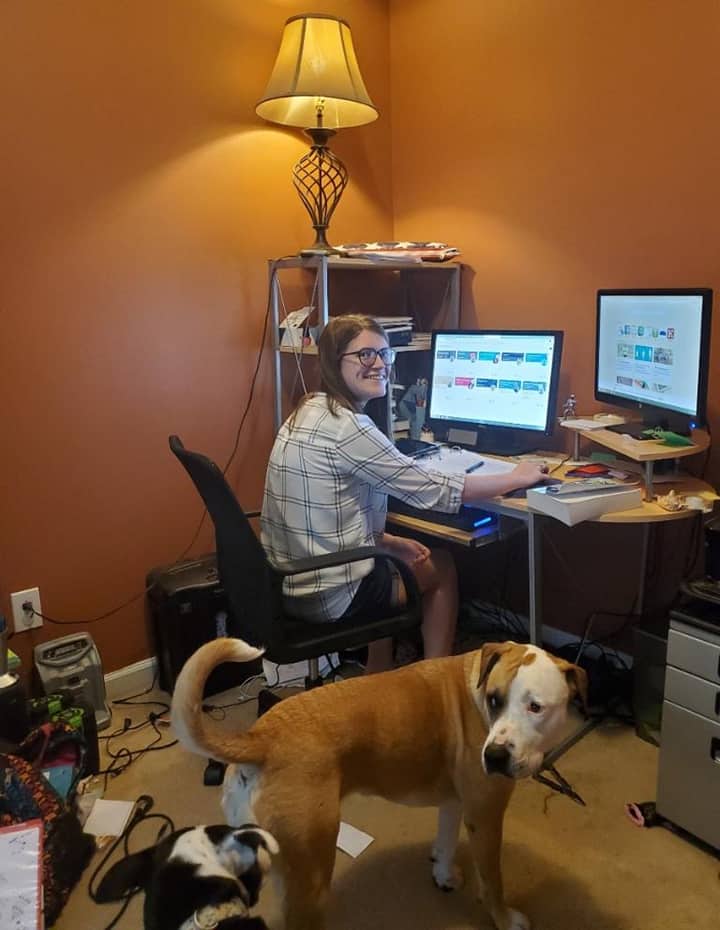 Lacey Boozer, a junior at Hillcrest High School in Simpsonville, South Carolina, sits in her home office. This is where she completes most of her online schoolwork, while her dogs Kit and Mace hang out. 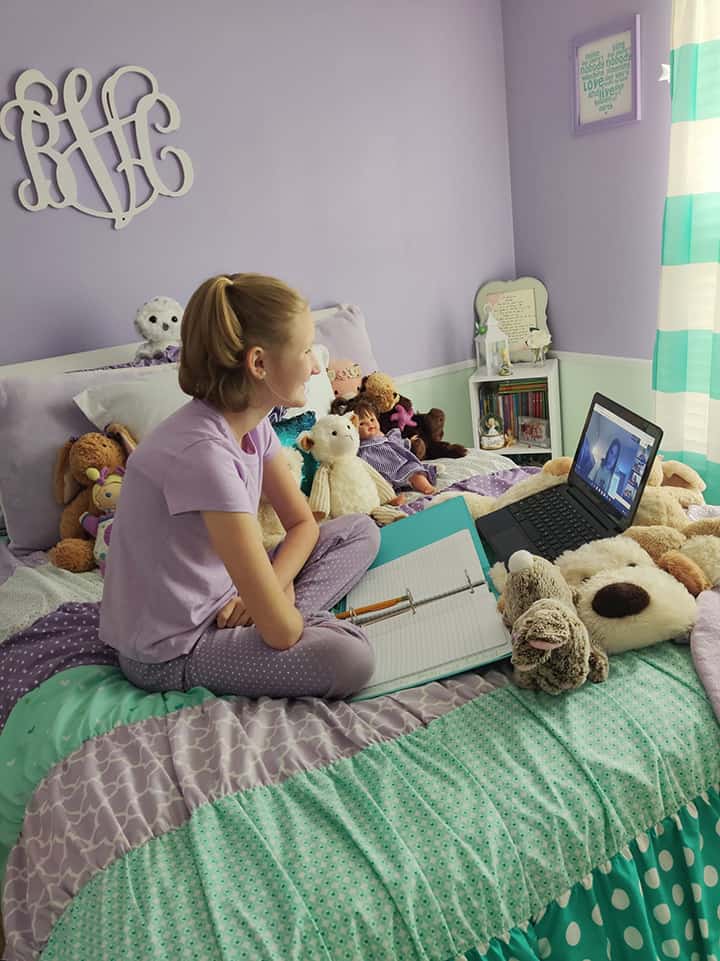 Baileigh Vaughn sits on her bed while participating in a video lesson with her teacher and fifth-grade classmates. 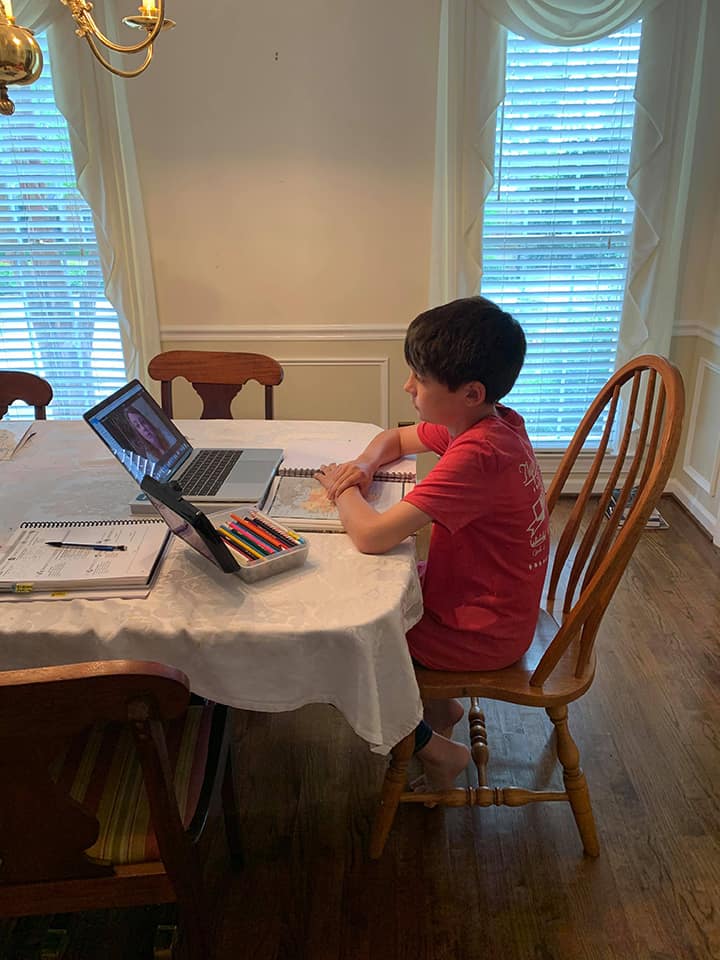 Homeschooled seventh grader Thomas Culbertson watches a video lesson from his teacher before virtually attending his homeschool group later in the day. 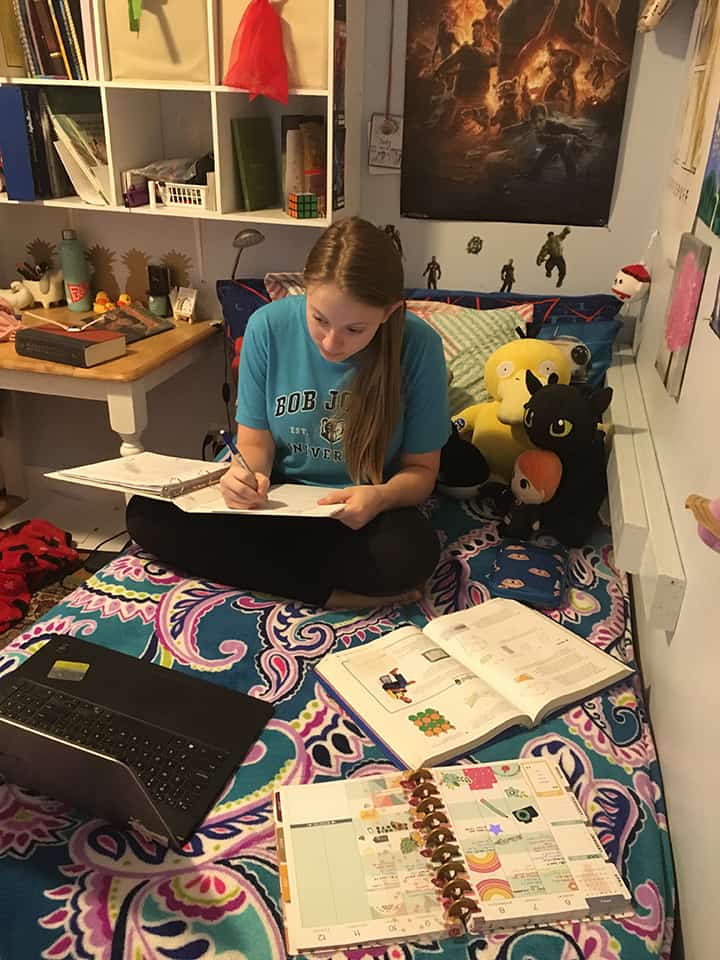 Judy Benner, a homeschooled high school sophomore, now does schoolwork completely from home. Her classes at a local homeschool co-op have recently shifted online for the remainder of the semester.