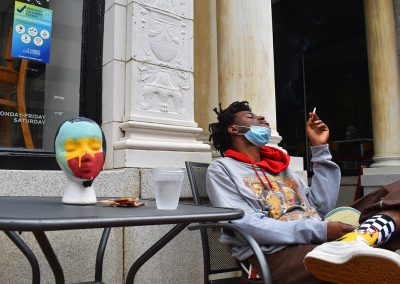 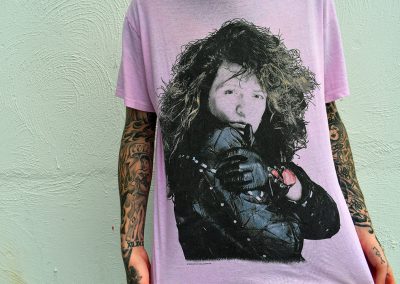 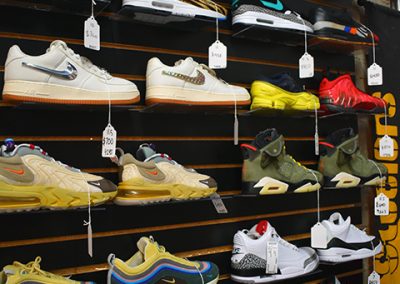 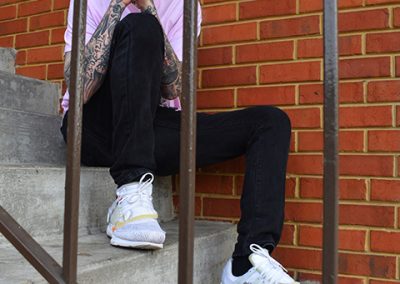 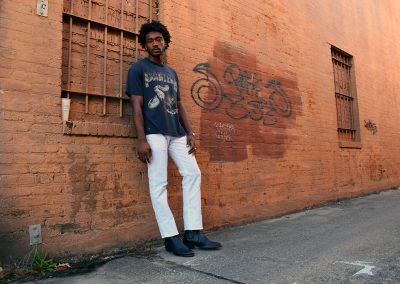 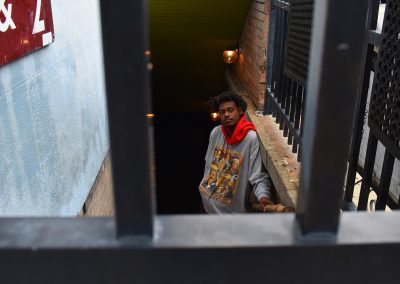 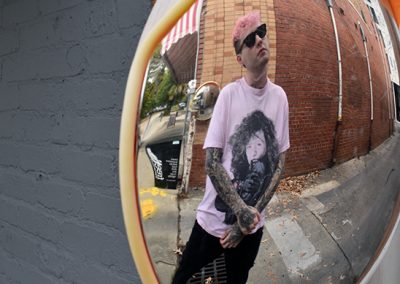 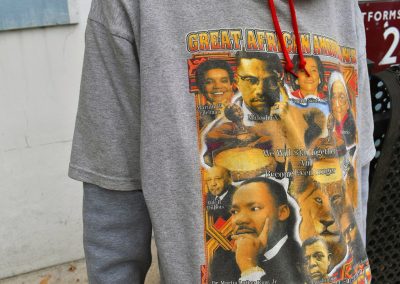 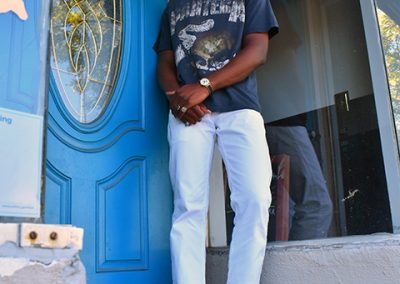 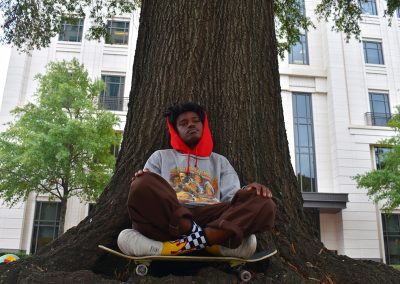 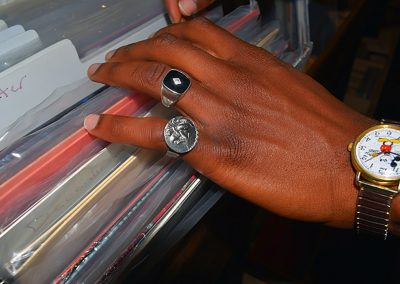 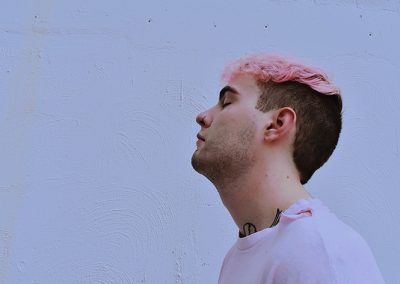 Men are stepping up and standing out in the fashion industry. From wearing monochromatic suits to cross-body bags, they are picking up on new fashion trends, including vintage clothing.

Vintage clothing has become a phenomenon in the fashion industry. It is trendy, accessible and environmentally friendly. Men are particularly embracing vintage T-shirts, as it allows them to stand out while providing minimal effort. But they are also focusing on selling the clothing and figuring out how to make their second-hand businesses stand out from others.

“Just growing up, as soon as I’d go to my dad’s house, for some reason I would go straight to his closet,” Clarke said. “I’d try on his big, old jerseys and hats. I’ve always just liked clothing in general and a lot of the pieces he had. Like, I remember he had some of the pieces that I’m now spending hours looking for.”

Coltree Supply is a vintage clothing re-sale shop selling primarily T-shirts. Clarke opened the business with a partner but after his partner moved to Atlanta, he is now rebranding on his own.

Clarke sells his clothing through pop-up shops and Instagram where his goal is to make his account pop.

“I’m on Instagram right now, but it’s like, how are you going to stand out amongst a crowd of thousands of thrift accounts,” Clarke said. “It’s more than just thrift, I feel like it’s a culture, a way of life.”

At the beginning of the coronavirus pandemic, Clarke was working for a property management real estate company. When things began to shut down, he viewed it as an opportunity to pursue Coltree Supply full time in hopes of one day opening a brick-and-mortar shop.

Clarke said vintage re-sale is more than finding a unique piece in a second-hand shop and selling it for $200. For him, it’s the history behind the pieces that he sells that make it worth–while.

“It’s like, when did it come, when was it tagged, is it single stitched, how is the fade, who wore it,” Clarke said. “It’s so much more than just a shirt.”

Clarke doesn’t only sell vintage clothing – he also wears it. He feels different in a vintage T-shirt compared to a T-shirt bought from a department store, Clarke said.

“I’ve always been one to want to stand out, but not just to be all counterculture for no reason,” Clarke said. “I’ve always been a little different so to speak. And so for me, it was like, okay, if I have a shirt that says it’s from 1995, like Marlins baseball or whatever, somebody will be like, ‘Hey, where’d you get that?'”

Clarke said vintage clothing is ideal for men because it is a way to look as if a lot of effort was put into an outfit.

“I know a lot of dudes are like … they’re not really trying to spend a whole bunch of time doing stuff,” Clarke said. “It’s like throw on a T-shirt, throw on some pants and go. So, now throw on some vintage, some jeans and maybe some boots. It looks like you put in so much time and effort but you didn’t.”

Avery Britt opened up his second-hand vintage re-sell business, TheGraveyardThrift, as an umbrella for art and self-expression to come together.

“For now I’m just re-selling vintage and unique pieces I’ve been cultivating for almost two years,” Britt, 23, said. “I think it’s hard to keep up with time these days but all my finds are from thrift stores where I live and also when I travel to other cities. I’m also working on a few runs of my own shirts that should be available soon.”

The Columbia resident, who said he starts each morning by drinking a cup and a half of black coffee, developed a passion for vintage clothing after receiving hand-me-down clothes as a young boy.

“I began wearing vintage pieces as a means of necessity before fashion. I got hand me downs from my older brother as well as my godparents,” Britt said. “I remember getting really excited when my mom would bring home trash bags full of old clothes for me to go through from them. I still even have a few of them today and that was almost 14 years ago now.”

“I feel like in order for culture to be pushed forward you have to appreciate what has come before you because it helps broaden what influences new cultural trends,” Clarke said. “Almost like how you can hear certain influences of other music artists or bands in songs you like, you can see what previous trends influenced countercultures and popular trends.”

The idea of vintage is, ironically, becoming modern.

“I would definitely say vintage is parallel with today’s modern style,” Britt said. “Like most fashion trends in America, once famous icons get behind it the sky is the limit.”

Britt said that he cultivates a personal style that would make the older generation do a double take.

“For the most part, skate culture and the musicians I’m into dictate my style,” Britt said. “My taste is all over the place, so I usually just go for pieces that I either identify with or are styled in a way that stands out from what I already have in my closet.”

Nathan Rush became interested in vintage clothing as a teenager when he was influenced by an older friend.

“When I was 13 or 14 I had a mentor/big brother figure and he was really into like, vintage SnapBack hats for sports teams and such, so a lot of times when we would hang out we would go eat wings and look for hats,” said Rush, who grew up in Columbia, South Carolina but now lives in Savannah, Georgia. “It was so much fun and I really enjoyed hanging out with him and that’s what initially came to spark my interest into vintage specifically.”

Rush opened up Rush’sHypeWear in an attempt to share his passion for vintage designer garments. The second-hand re-sell business has a large inventory.

“I sell a good variety of vintage, hypewear, used designer, sneakers and some new age prints,” Rush said. “I really have just about everything in my inventory.”

Like many vintage re-sell shops, Rush primarily advertises his items on Instagram but also allows people to come to his house to look through his inventory.

“I mainly sold in person when I lived back in Columbia,” Rush said. “People who knew me came through a lot to the house before the pandemic really hit and would just go through what I had – it was such a blast! I took a bit of a hiatus after I moved but I’m going to start posting more often because I definitely have some heat that needs to come out.”

Rush said that the market for vintage clothing has taken off in recent years, becoming more popular.

“I would definitely say within the past five years the vintage market has taken way off and there have been some more high profile people wearing more vintage,” Rush said. “I think the new, modern in-style is definitely like, urban outfitters-styled vintage remakes. That’s mostly what I see on the streets unless you’re hanging out at buy-trade-sell stores.”

The vintage re-seller and lover of the fashion industry has an extensive personal collection of vintage clothing himself, often keeping some of the shirts that he purchases for his business.

“I would say most of my T-shirts in my collection are vintage,” Rush said. “I’m bad about buying a bundle of shirts from another re-seller and keeping all the dope ones that fit me.”

He describes his personal style as being “all over the place,” but often derives from garments that remind him of being a child.

“I love everything from movie promos, Nascar, WWE, NWO, bands, rap tees and bootlegs,” Rush said. “I love stuff that resembles happy times from my childhood but I’m also a huge sneakerhead and always have been. I can just now afford them. Some days my outfits will be super loud like with an all-over print shirt, tight jeans and Jordan 1s. Sometimes it’s super minimal like with FOG, vintage Levi’s and flannels.”

Men in Vintage is becoming a modern trend

Men are becoming more known in the industry of wearing and selling vintage clothing. Clarke views it as an opportunity for men to stand out in the same way they would stand out buying a limited edition pair of sneakers.

“If you think about like sneaker culture, I would say a lot more guys are into sneakers,” Clarke said. “And so the cool thing about sneakers is that once they release, they release. Once they’re done, they’re done. If you have a pair, they’re going to be like, ‘where did you get them?’ … For vintage you get that same one-on-one feel. You still get to stand out.”

According to Britt, icons are another reason men are interested in vintage clothing. You can find vintage clothing in movies and television shows, drawing the attention of viewers.

“I feel like men have been attached to vintage t-shirts for a while now. From the movie Juno to TV shows like Shameless there have been male characters that had vintage t-shirt collections,” Britt said. “But as far as men casually selling vintage, I feel like once it started to spike it just rose.”

“I’d say communities within vintage, streetwear and sneakers have always been more male-driven while women have been more engaged with luxury, high fashion, and designer,” Rush said. 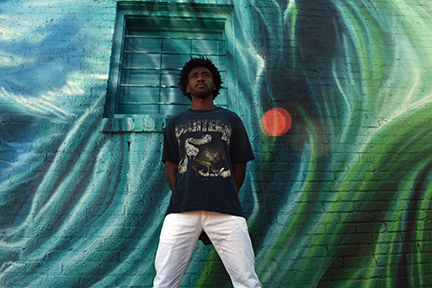 Cy’ree Clarke is modeling one of his first and favorite vintage band tee’s from the ’90s. Photo credit: Hallie Hayes 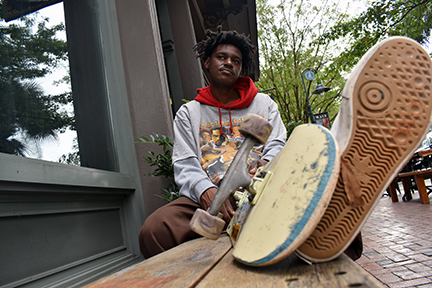 Avery Britt opened TheGraveyardThrift as an opportunity to turn his dreams into a reality and he hopes to one day design his own clothing. Photo credit: Hallie Hayes 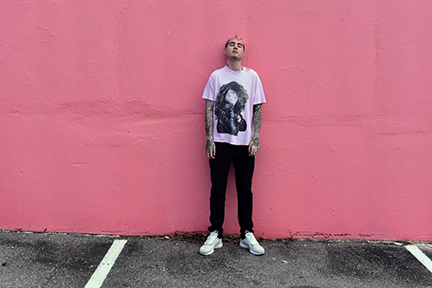 Nathan Rush has an inventory that ranges from vintage T-shirts to designer garments and sneakers. Photo credit: Hallie Hayes 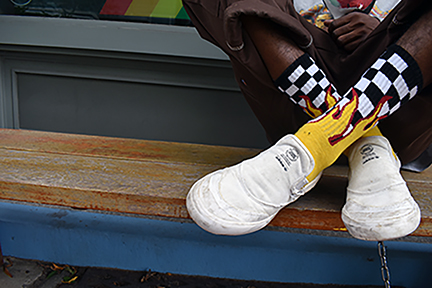 Britt will sometimes pair modern pieces, such as these flame socks, with his vintage clothing to make his outfit pop. Photo credit: Hallie Hayes