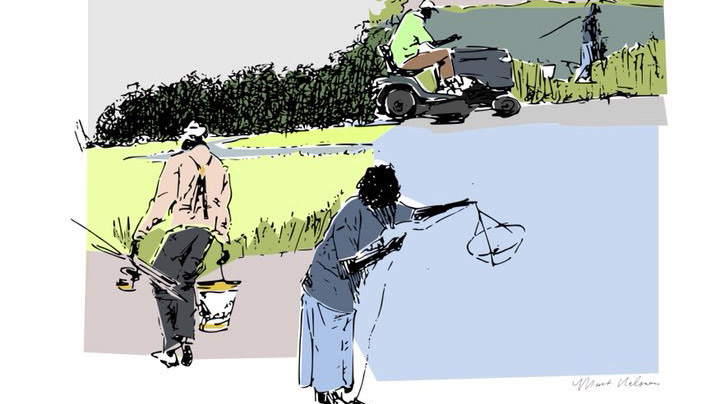 Artist Clementia “Ment” Nelson is setting out to change South Carolina’s “cool” factor one painting – and one tweet – at a time.

“I feel that we are the change,” said Nelson, an artist from Beaufort who wants to modify the sometimes negative attitude that comes with living in the Palmetto State.

The artist, known for his innovative abstracts, acrylics, water colors and ink sketches, has captivated an audience of almost 20,000 followers over the last decade through social media. As Nelson’s Twitter bio notes, he makes it cool to be from South Carolina. His art can be found on his website, www.mentnelson.com and on Twitter at @mentnelson.

“I feel like it is such a negative stigma, being from South Carolina,” said Nelson. “This is actually kinda a cool place.”

South Carolina hasn’t always been a place he imagined he would live. After a time in college, Nelson tried to move to Los Angeles or New York City but never raised enough money.

“Instead of frustrating myself by still wanting what wasn’t possible, I was like, at least lemme change my perception, lemme change how I look at where I am,” Nelson said, who now uses his art and social media to change the mindsets of others in similar positions. “I’ve seen how it works for me so now I’m just trying to lead other people to the light.”

Born in Beaufort, Nelson was named after the late Sen. Clementa Pinkney, the son of Nelson’s daycare director and a family friend who was murdered in the 2015 Charleston church shooting. From his boyhood, he was always known as Ment.

Nelson, 30, spent his childhood in the Lowcountry and attended Hampton County Public Schools. By the third grade, Varnville Elementary School identified him as a gifted and talented student, and Nelson said his teachers recognized his artistic abilities. He recalled recreating a lot of art from Lowcountry native Jonathan Green, an artist Nelson admires.

Even before grade school, Nelson exhibited an interest in art.

“I think what got me started was my mother. While she talked on the phone, she used to doodle on whatever she was writing on,” said Nelson. He explained that her doodles of stick men and circling words she found within the words in books was what sparked the talent that is now his career.

His family played an important role in his art, as did the natural world around him. “I grew up in the country, played outside all day,” said Nelson. “That right there made it to where I was very in tune with nature.”

That’s why it’s common to find him at Lake Warren State Park, fishing in one of the “good spots,” down the side of a bank on a long, narrow road adjacent to the lake. A visitor can find him leaning against the rail of the platform above the water, fishing rod in hand and a bucket beside him for his catch.

Nelson and his grandmother share a lot of memories at the lake.

Caught grandma slippin one day. Now she got her own gear pic.twitter.com/XjBdHuGUJX

“The drawing that I have where she is looking in a bucket – it’s called ‘We got 8’ – that was inspired from out here,” said Nelson, who drew the piece around a time he and his grandmother spent a lot of time fishing and crabbing. “[This park] is one of the things that makes this area unique.”

Though a lot of his art brings light to country life, Nelson says his art just reflects what he is inspired by at the time. “It just comes from my real-life experiences, just day to day,” Nelson said. This includes his recent work that tackles current events.

In October last year, Kanye West visited President Donald Trump at the White House. Nelson captured the moment with “Kissin Up,” a watercolor piece of West wearing a “Make America Great Again” hat and President Trump wearing a lipstick-stained kiss on his cheek. This piece can be purchased for $1 million.

“It’s just so interesting to me, the time we exist in right now… Politics has become pop culture,” Nelson said. He mentioned that as an artist, part of his job is to document, and when live television showed a rapper in the White House, he thought, “I’ve gotta draw this, I’ve gotta document this.”

Unlike many artists, Nelson no longer feels it’s necessary to move to a larger city in order to profit from his art. “I look at New York, LA, Atlanta, all these overcrowded places. I feel like everyone is already there doing,” Nelson said.

Nelson uses his social media to work with the South Carolina Arts Commission, which encourages artists like Nelson to find other creative minds where they live. Nelson specifically searching Hampton and Jasper counties.

“Ment is a great example of someone who is committed to his home town, community and really his state,” says Director of Community Arts Development Susan DuPlessis. “He is a great representative of our state.”

His connections through the S.C. Arts Commission led him to a curator at the Smithsonian, who placed his piece “Old Sheldon” in an exhibit titled “Crossroads: Change in Rural America.” The traveling exhibit will be hosted by rural areas across the nation for the next six years, including the Historic Harriet Barber House in Hopkins, which held a grand opening on Feb. 9. The exhibit, which runs through March 24,  gives rural artists the the chance to represent their communities.

“It’s one thing to put out statistics about rural America, but the real story is how people live their lives in rural America,” said Robbie Davis, project director for the Museum on Main Street in Washington D.C., a branch of the Smithsonian.

Marie Adams, Harriet Barber House owner, feels that this exhibit and the artists involved will bring in discussion of culture and preservation of smaller communities. “Their artwork depicts life in rural areas,” said Adams. “They keep history alive and reflect on the past.”

Brookgreen Gardens is also presenting Nelson’s art in an exhibit called “Frum We Ownt Yeye (Gullah Geechee From Our Own Eyes)” until March 17. “What I’ve noticed, is when I just give all of myself to my gift, other things happen. Opportunities come and I meet people,” Nelson said. “They’re happening because I am creating things. I feel like if I ever stop creating, everything else stops.”

Nelson’s next big plans include investing in his own studio space somewhere around South Carolina so he can continue painting. “My plan is always just to keep painting,” Nelson said, and though he never knows exactly what will inspire him to create his next piece, he plans to continue using his art, social media and his relationship with South Carolina arts to share his pride in his home state.

“I always looked at it (South Carolina) like an empty canvas,” Nelson said with a laugh. “I guess cause I’m an artist.” 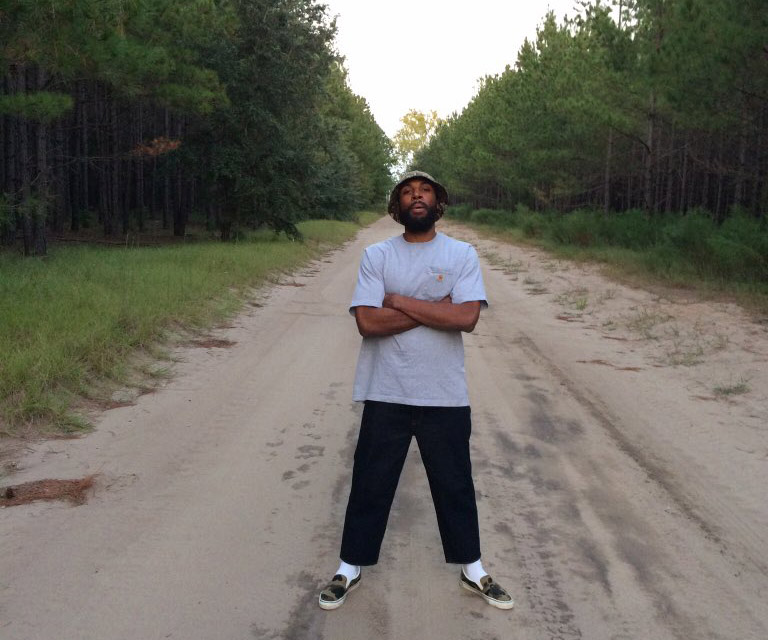 Ment Nelson, age 30, is a Lowcountry-native who uses his art and social media to promote living in South Carolina. 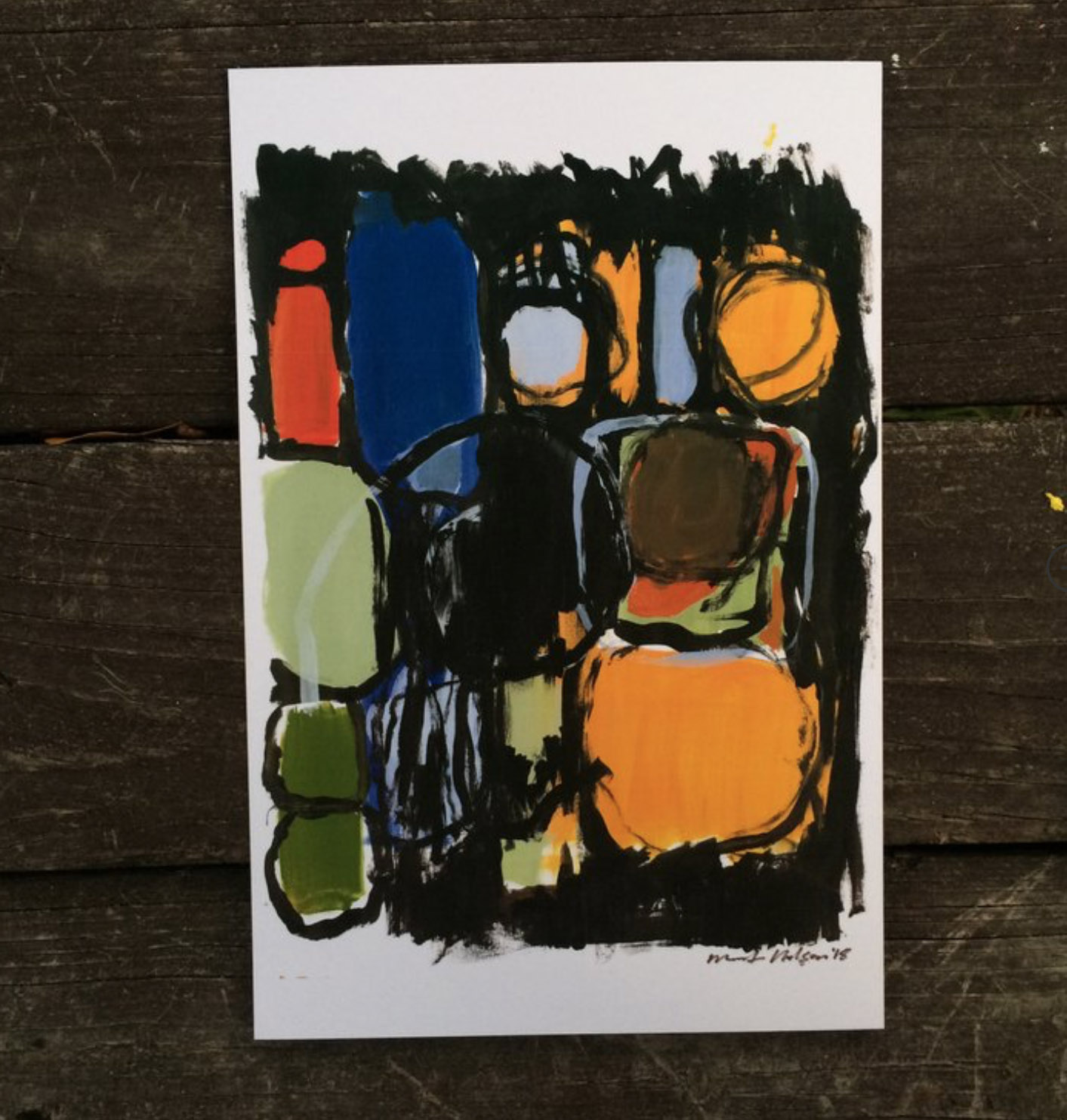 “Untitled 2” is an abstract painting that sold for $1,200. Prints can be purchased on Nelson’s website for $40. 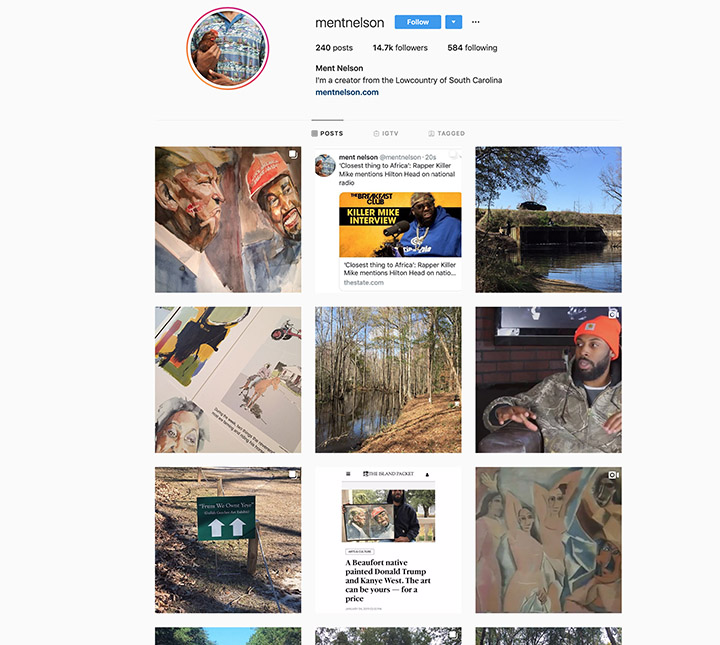 Nelson uses his social media and his art to illustrate that it is cool to be from South Carolina. 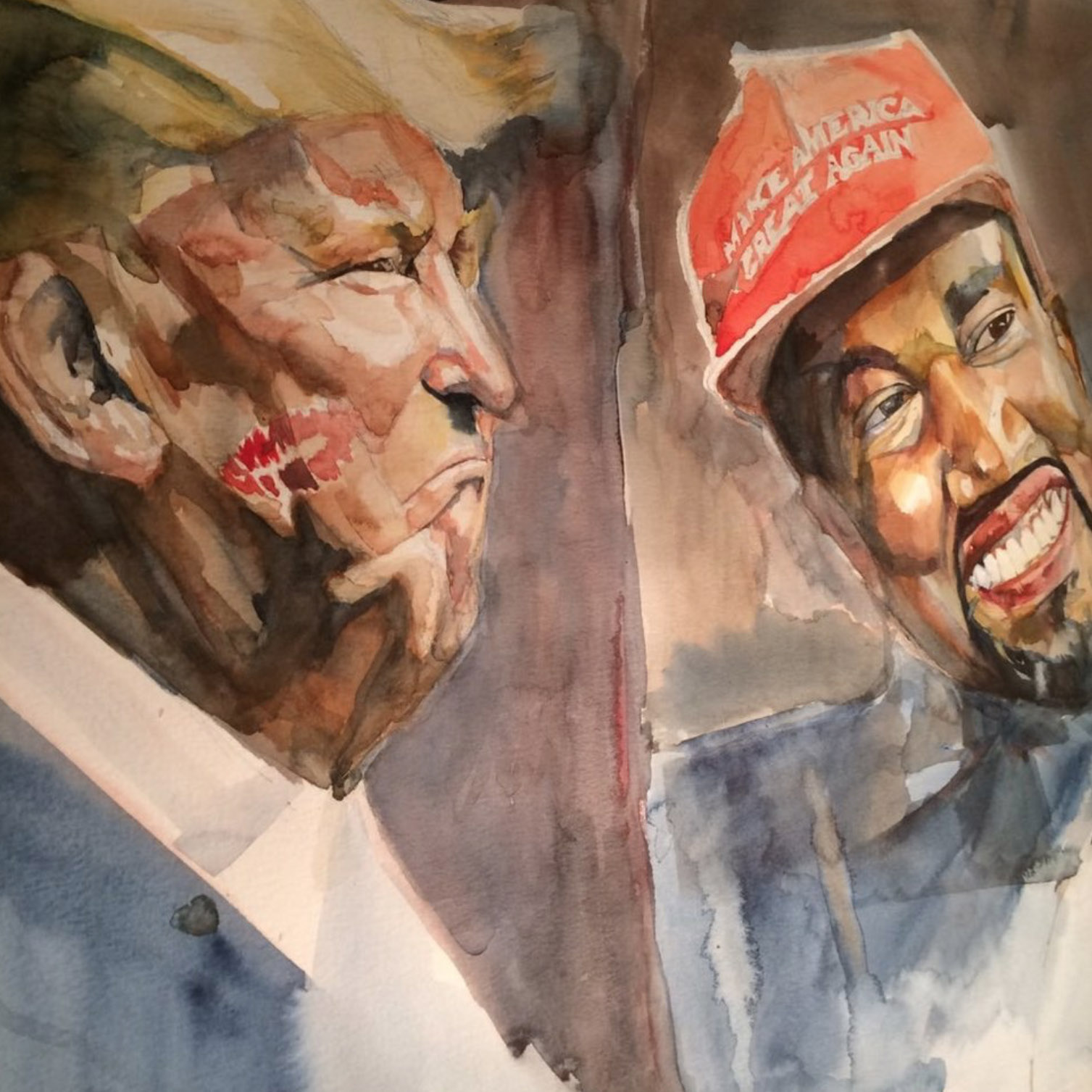 “Kissin Up” is a water color painting featuring President Donald Trump wearing a kiss on his cheek and Kanye West wearing a “Make America Great Again” hat. Nelson is selling the painting for $1 million, but prints cost $40. 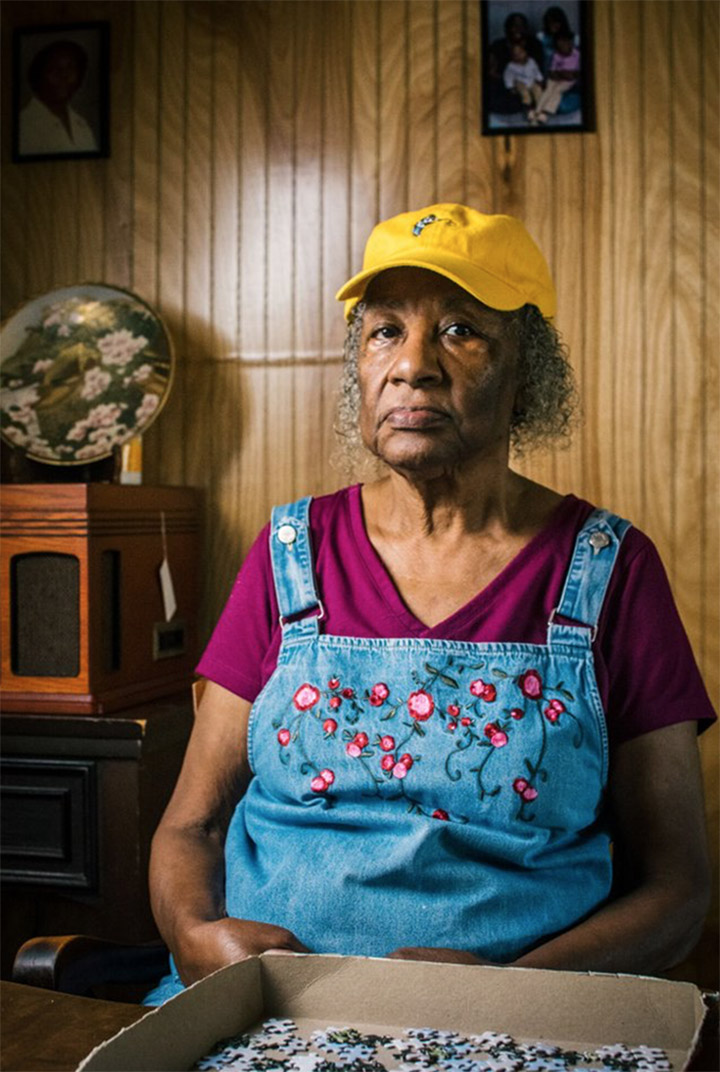 Ment Nelson’s grandmother, Lillie Rose Berlin, wears a yellow hat with an ink sketch of her fishing that Nelson designed and sells on his website.