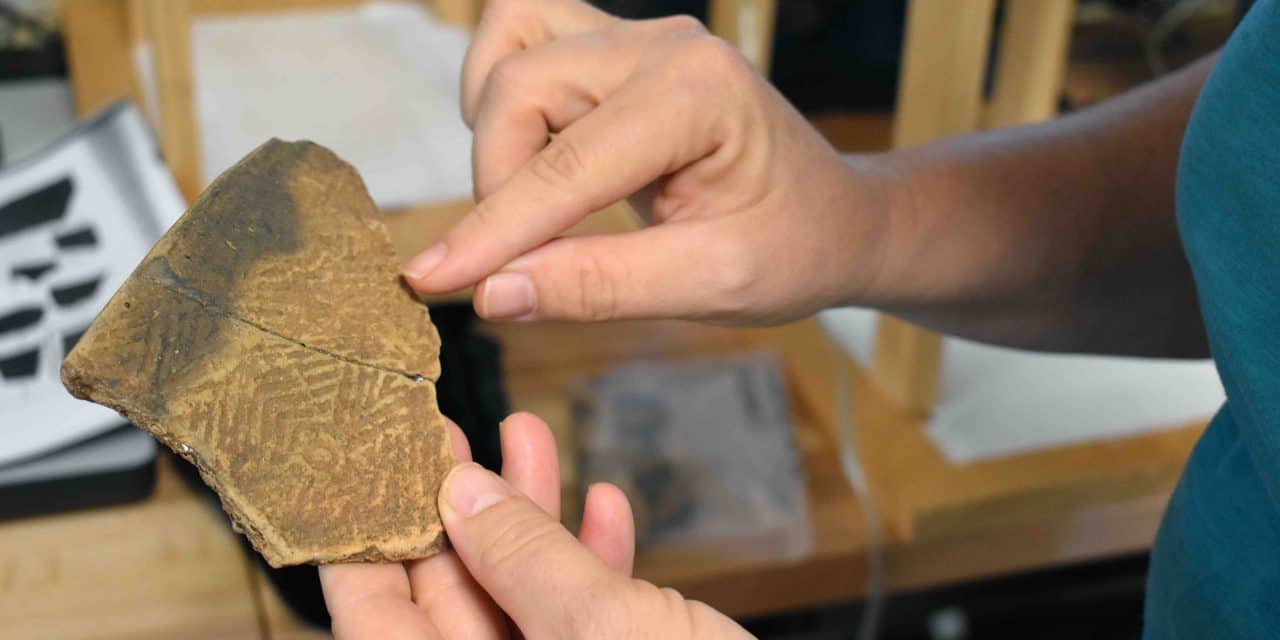 Two thousand years ago, Native Americans were moving across the southeastern United States, leaving behind evidence of their unique traditions and cultures as they traveled from place to place.

Today, archaeologists are piecing together an image of prehistoric life through fragments of a unique style of pottery they have named Swift Creek. The pottery is distinctive because ancient Native Americans carved elaborate designs into wooden paddles and stamped them onto the bowls and plates.

Now through a project that employs artificial intelligence and other whiz-bang technology, University of South Carolina researchers plan to catalog all the pottery designs and trace the paths of these early Native Americans.

“It’s a fantastic window into how paddles, people or both are moving around on the landscape, something we almost never see archaeologically,” said project director Karen Smith.

It began with a cup of coffee and a question.

“Wouldn’t it be great if we had a fingerprint machine that could take potsherds, recognize the designs, and begin to make matches automatically?” Smith remembers asking a colleague at lunch nearly 5 years ago.

What materialized was an expansive collaboration between the College of Arts and Sciences’ Center for Digital Humanities, the S.C. Institute of Archaeology and Anthropology, the College of Engineering and the Research Computing Center.

“We can extract designs from these sherds, recreate the paddles that were originally used to stamp the pottery, and then through the recreation of those paddles, begin to see connections between sites,” said Smith.

Swift Creek pottery’s distinctive style and prevalence in the southeastern United States makes it a tradition of particular interest to researchers like Smith, who realize the opportunity it presents to track human interaction and migration.

“There’s a lot of archaeological databases out there that had really good intentions, but didn’t get the support from other disciplines to really make it something amazing,” said Samantha McDorman, a project research assistant.

Now in its fourth year of development, the SnowVision team endeavors to expand and continue research of Swift Creek pottery with this grant and build a database of designs that will be fully accessible to the public.

“I think the people who have reviewed our proposals agree with us that this is a very exciting project and one they want to support,” Smith said. “It has implications for science and for humanities, and it’s just thrilling.”

To interact with a demo of the SnowVision software, visit http://www.worldengraved.org/index