Muschamp out as South Carolina’s coach, Bobo takes over 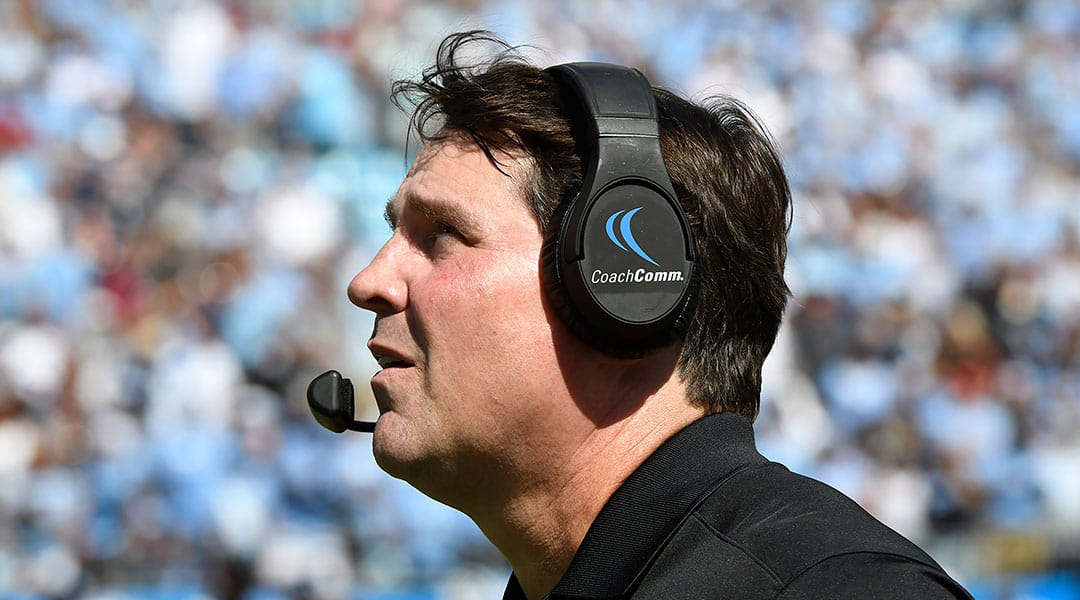 Will Muschamp was relieved of his head coaching duties on Sunday night after a 28-30 record in five seasons as South Carolina’s head coach.

Less than 24 hours after South Carolina parted ways with coach Will Muschamp, the Gamecock football team is focusing on the upcoming game Saturday night against Missouri while trying to come to terms with losing their leader.

Will Muschamp, who went 28-30 overall at South Carolina and 17-22 in the SEC, was replaced by interim head coach Mike Bobo who will lead the team the rest of the 2020 season. Since Muschamp’s contract was terminated early, South Carolina owes him $13.475 million, according to a contract amendment signed last December.

Muschamp came to South Carolina after one year as Auburn’s defensive coordinator and before that, Florida’s head coach from 2011-2014. Muschamp was also relieved of his coaching duties at Florida.

Bobo is in his first season at South Carolina and certainly did not expect to be thrust into the lead coaching role more than halfway through the season. Bobo said Monday he is keeping his eyes on the players and program instead of himself.

“It’s about us; it’s about everybody. We all have individual goals and aspirations, but, to be honest, it’s not about that. It’s about these players, it’s about doing our job as the adult, as the leader, as the coach,” Bobo said at Monday’s press conference called by the university.

“It’s showing these kids how you respond to adversity, that you gotta get up and you gotta go to work. That’s gonna be my message and how I go about my business as we move forward on a day-to-day basis with these kids and with this staff.”

Bobo played quarterback for the Georgia Bulldogs in the 1990s and served as the head coach of the Colorado State Rams from 2015-2019, before being named offensive coordinator for the Gamecocks this season.

Before the team began preparation for Missouri, they took Monday off to process the news. Bobo said practice will resume Tuesday.

“If I saw any quit in this team, I wouldn’t be part of this,” Bobo said. “I’m going to look at everything and what gives us the best chance to win.”

Bobo also announced Monday that South Carolina’s all-time winningest quarterback Connor Shaw will be added to the on-field staff for the remainder of the season and will be in the quarterback’s room. 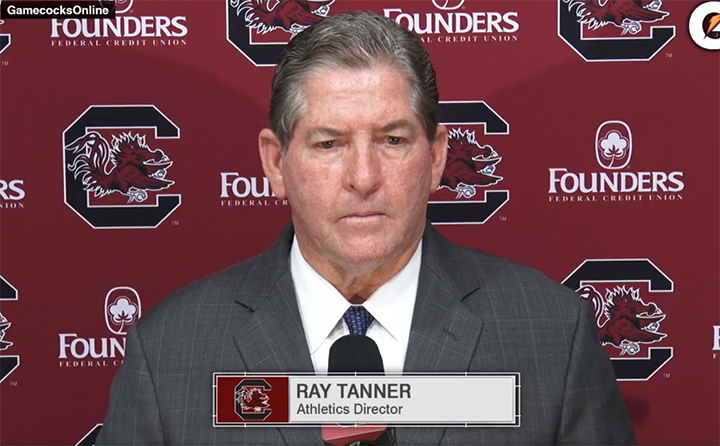 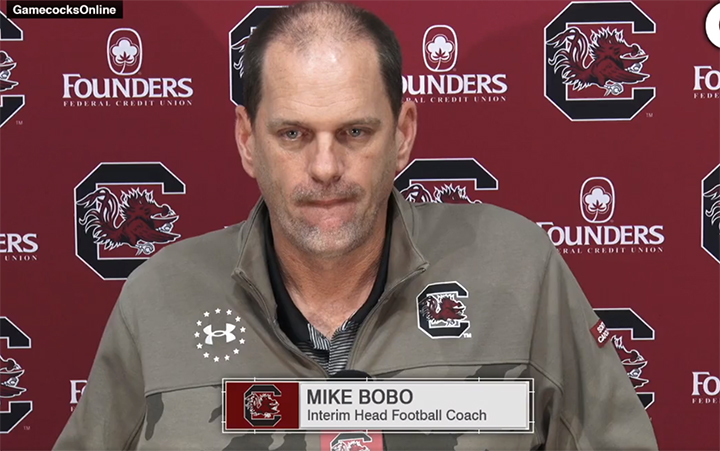 Former and current players — other notable Gamecocks weigh-in on firing 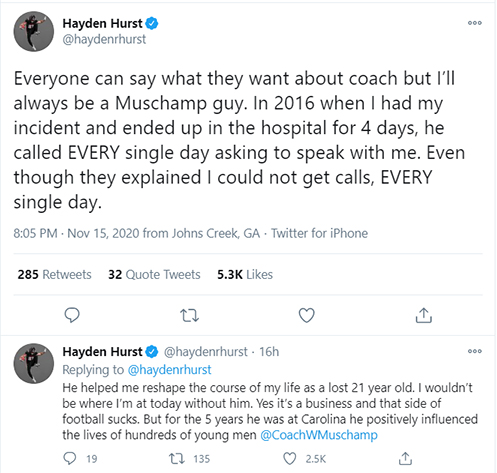 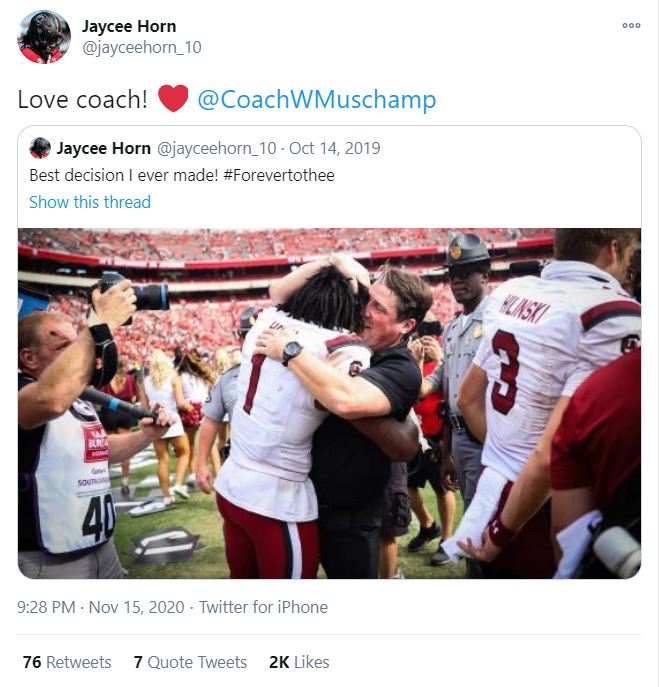 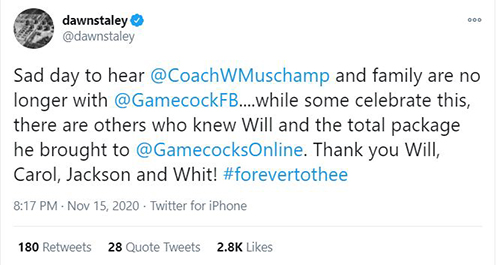 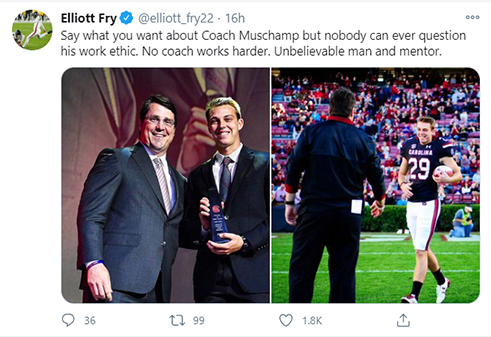 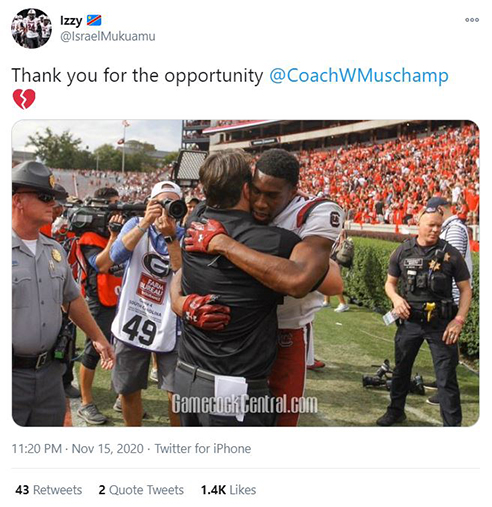 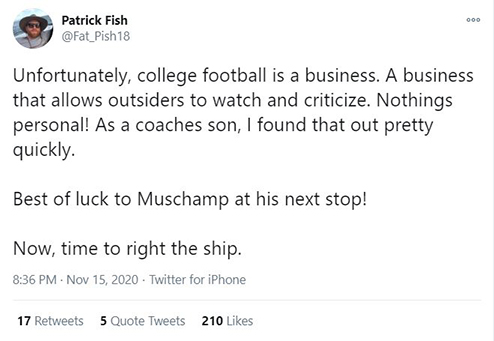 Graduate transfer quarterback Collin Hill, along with other current and former players, expressed gratitude towards Muschamp.

“I am extremely grateful for Coach Muschamp,” Hill said. “I was coming off of my third ACL injury, and he took a chance on me. Not a lot of people would’ve done that. I know he cares about this team and this program.”

Jabari Ellis, a senior defensive lineman for the Gamecocks emphasized the impact that Muschamp had on him as a person.

“He was more than a football coach,” Ellis said. “He taught me a lot about life. When I first got here, I really didn’t understand certain things going through life, how to really fight adversity. But he kind of taught me how to fight adversity.”

South Carolina owes Muschamp $13.475 million, according to a contract amendment signed last December. Director of Athletics Ray Tanner said the decision to fire Muschamp came down to wins and losses, but he said he appreciates the culture Muschamp created in Columbia.

“You always hear life is personal? It is,” Tanner said. “It’s about more than football. The decision was made because of wins, not the character or culture or anything else. It was about the bottom line, and that makes it hard.”

Louisiana head coach Billy Napier and Liberty head coach Hugh Freeze have emerged as two of the many names in South Carolina’s head coaching search. Tanner said he wants an offensive-minded coach and said UofSC President Bob Caslen will be involved in the search.

“He’s my direct report, so he’ll be involved,” Tanner said. “We will be looking for someone with the energy, commitment and organizational skills that can move our program to a championship level.”

Though a timeline is unknown and unconfirmed, ideally the new coach will be hired by the start of the early signing period, which is Dec. 16, Tanner said.

So whether it’s watching the remaining three regular-season games or reading about endless head coaching search rumors on fan message boards, Gamecock football fans will have something to talk about in the coming weeks. 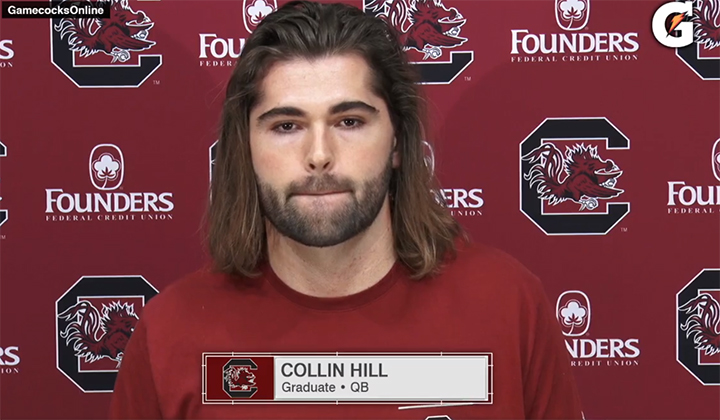 Gamecock quarterback Collin Hill is thankful for Muschamp taking the chance on him and emphasizes finishing the season strong for his teammates. Photo credit: GamecocksOnline 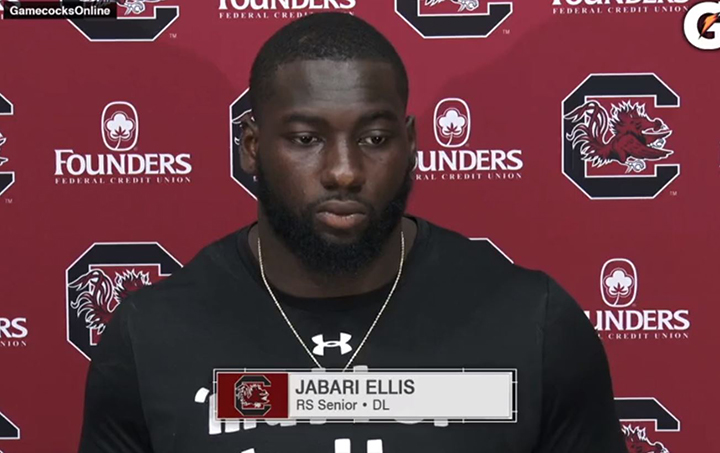 Like Hill, senior defensive lineman Jabari Ellis believes it’s important for the team to fight through the adversity that Muschamp’s firing has presented. Photo credit: GamecocksOnline