Is it Poe? No, mystery portrait turns out to be Confederate poet 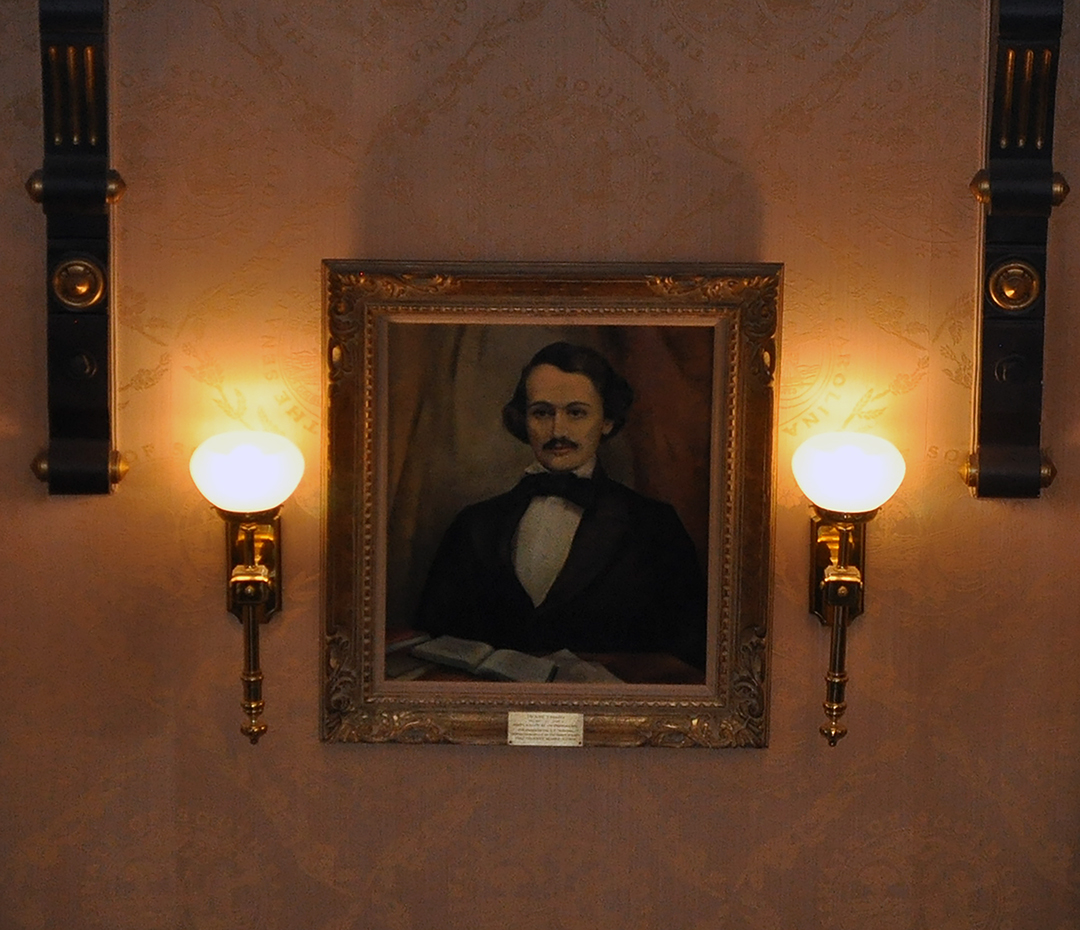 Henry Timrod’s portrait is on display in the Senate Chambers of the South Carolina State House. 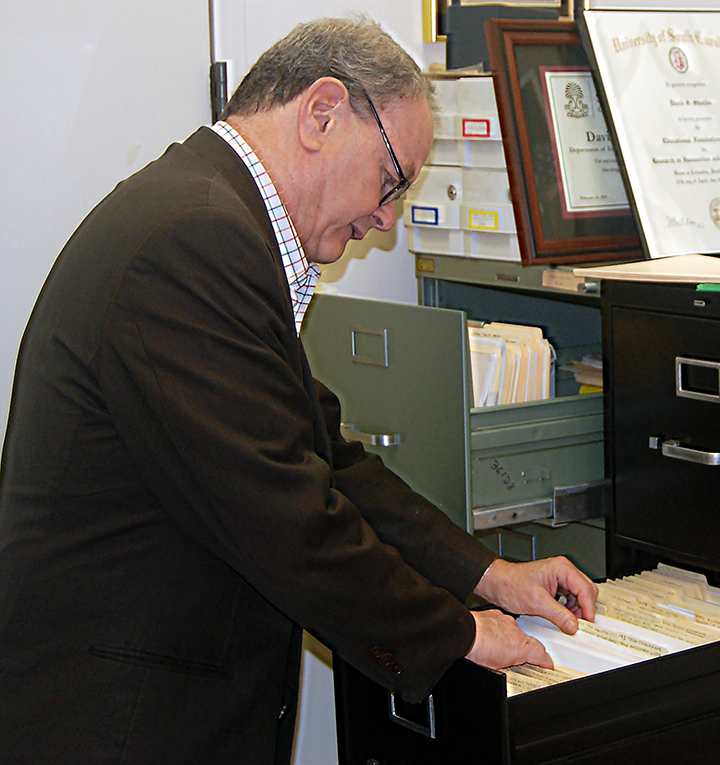 David Shields, a USC English professor, says “Henry [Timrod] grew up in an atmosphere of poetry.” 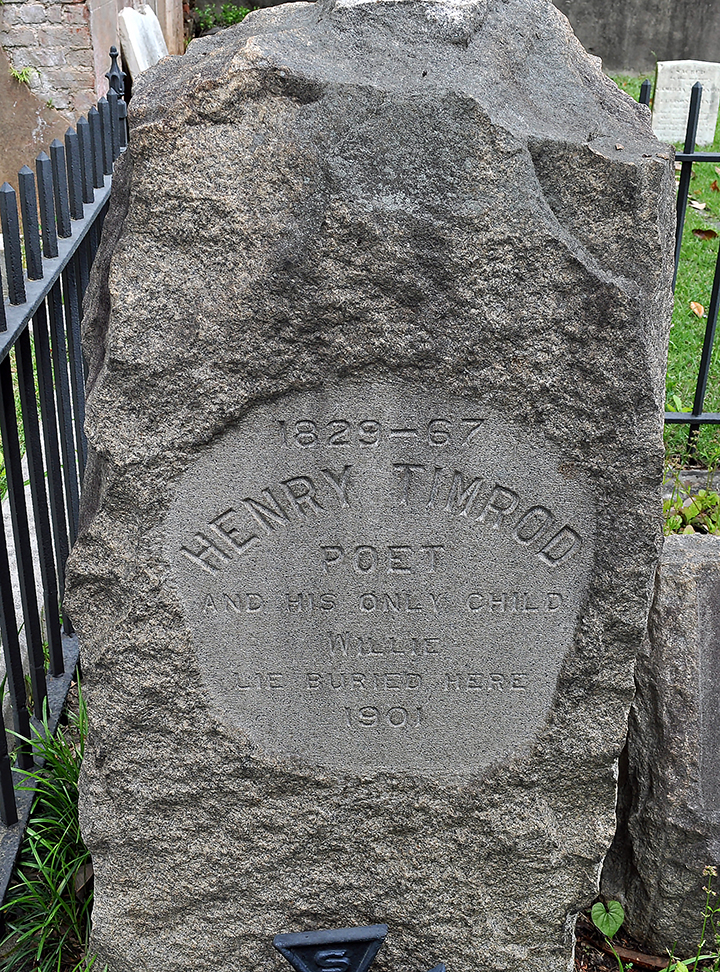 Henry Timrod was finally laid to rest at Trinity Episcopal Cathedral in 1901, over 30 years after his death. 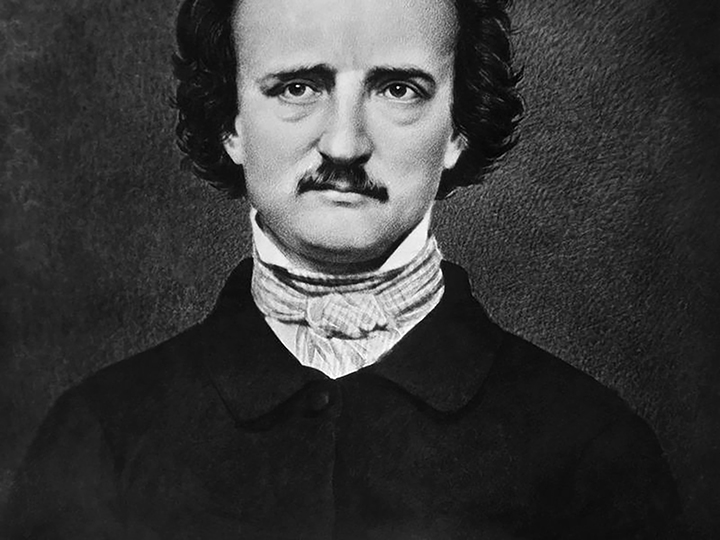 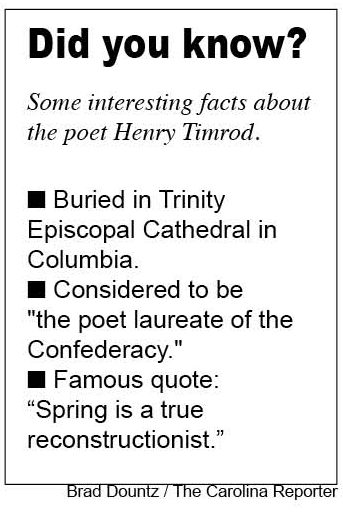 Visitors to the South Carolina State House might mistakenly think the portrait hanging on the left side of the Senate podium is the famous poet from Baltimore. The figure in the portrait is slim with flowing dark hair and sports an elegant mustache.

It turns out that the portrait is actually of Henry Timrod, a writer like Poe, who came to be remembered as the “poet of the Confederacy.”

It’s not a recent painting. It looks like it’s been hanging on the wall for for so long that most people today may have forgotten who Timrod is or what he did to get immortalized here.

Nimrod was born in Charleston in 1828, the son of a bookbinder and amateur poet of German ancestry. He briefly attended the University of Georgia in the mid-1840s before returning back to Charleston.

During this time, Timrod made a living by teaching, editing and submitting his poetry to different local publications.

“I had never turned, Till I had seen the star which never sets, Freeze in the Arctic zenith. That I failed To solve the mysteries of the ice-bound world, Was not because I faltered in the quest,” he wrote in his poem “The Arctic Voyager.”

By the time South Carolina seceded from the Union, Timrod had gained a voice as a poet.

“His most famous poems were written in conjunction with the outbreak of the Civil War, when he writes a poem called ‘Ethnogenesis’ which is sort of the inaugural poem of Confederate sensibility,” said David Shields, a USC English professor who focuses on the history and culture of the South.

“A nation among nations. And the world, Shall soon behold in many a distant port, Another flag unfurled! ”

During the Civil War, Timrod briefly enlisted, but was discharged for health reasons. He eventually married, had a son and worked at the newspaper, The South Carolinian, in Columbia.

He was in Columbia when Sherman’s army marched into town and burned his home and office to the ground. He would later die of tuberculosis in 1867, just like his father three decades earlier. He is buried at the Trinity Episcopal Cathedral in Columbia.

Timrod has been called the poet laureate of the Confederacy. Shields says Timrod stands out among other Confederate writers because of how he perceived the Confederacy’s agenda.

“Timrod was the first one to understand how the cause of secession could actually morph into a national conscience,” Shields said.

Today, there is still people who harbor serious resentment about the Confederacy and their legacy. Regardless, it’s a part of South Carolina’s history and Timrod will always be linked to it.

“It was only Timrod who could visualize a kind of aesthetic grounds for real shared experience and a real shared sensibility of Southerness,” Shields said.

“Meanwhile, behalf the tardy years, Which keep in trust your storied tombs, Behold! Your sisters bring their tears, And these memorial blooms,” Nimrod wrote in his poem “Memorial Ode.”