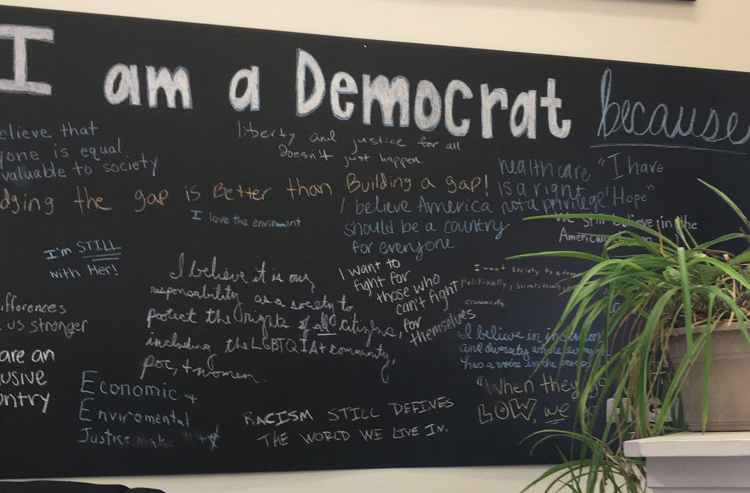 Inside the South Carolina Democratic Party office, people write why they are Democrats. 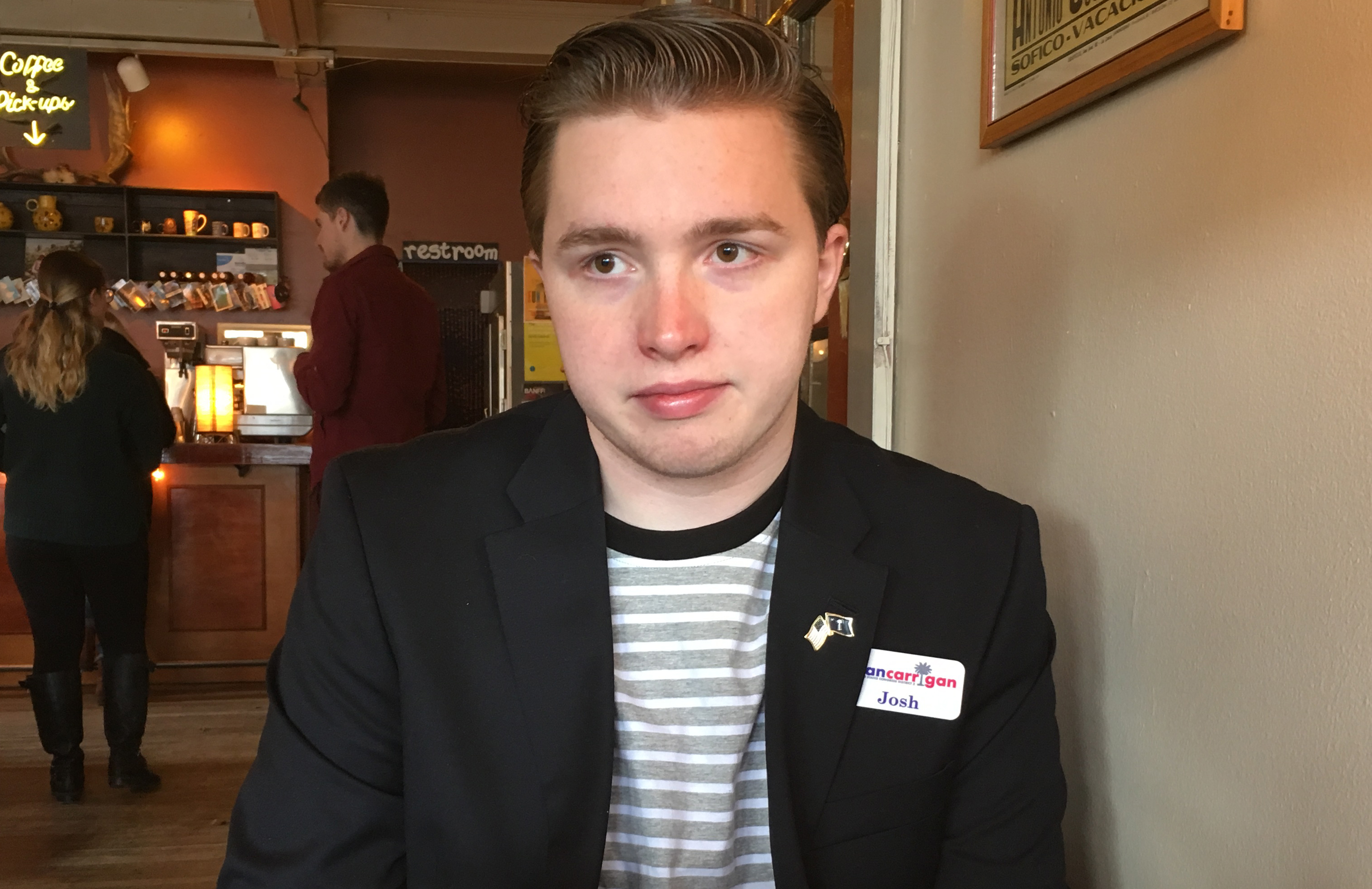 Josh Hughes, Sean Carrigan’s campaign manager, talked about how the increase of Democratic candidates running for
midterm elections this year is creating a “blue wave.” 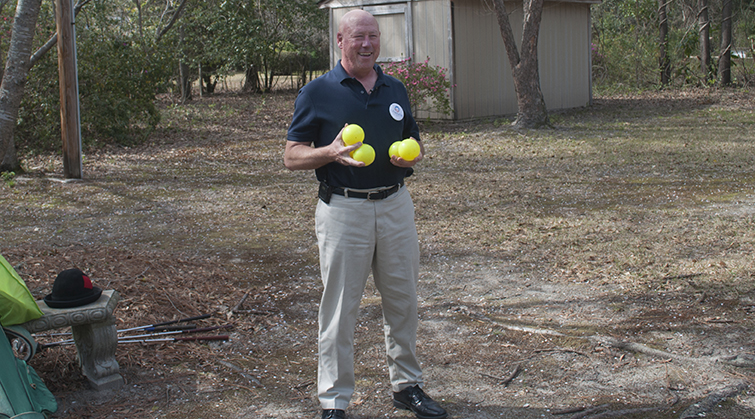 Steve Lough, a former professional clown, prepares to juggle. Lough has decided to run for Congress in the state’s 5th District. 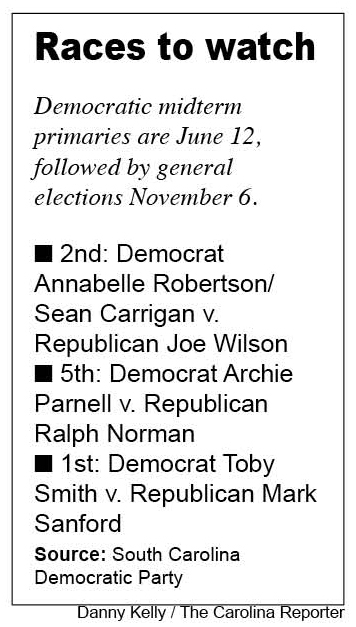 South Carolina is typically a red state, but Democrats think they can change that. This year, there is a Democrat running for midterm elections in every congressional district in the state, which almost never happens.

“Those are candidates who’ve never run for the (state) legislature before and they’re challenging Republicans who are not accustomed to being ,” South Carolina Democratic Party Chair Trav Robertson said.

There are now 323 Democrats running for congressional and legislative office, compared to 371 Republicans, according to the South Carolina Democratic Party. 21 Democrats are running for Congress, outnumbering the Republicans who have 20.

Take the 2nd Congressional District in the Midlands, won five times by Rep. Joe Wilson, who famously yelled “You lie!” to President Barack Obama at a joint session of Congress in 2009. This year, there are two Democrats vying for the nomination to take on Wilson on Nov. 6. Sean Carrigan and Annabelle Robertson will compete in the Democratic primary on June 12.

“I think in the wake of Conor Lamb and Doug Jones, you’re seeing a lot more Democrats across the nation, but especially in South Carolina because we recognize it’s not a lost cause,” said Josh Hughes, Carrigan’s deputy campaign manager.

“There is potential to win elections that haven’t been won, or have even gone unchallenged, for years now,” Hughes said. “You have five or six candidates running in the South Carolina 4th Congressional District.”

The 4th district is located in the upstate of South Carolina. It’s an open seat because incumbent Republican Rep. Trey Gowdy announced his retirement.

Democrats all over the state and the nation have seemingly decided it’s time to act on their dissatisfaction with President Donald Trump.

“What you’re witnessing is an explosion of democracy in resistance to the Trump agenda,” Hughes said. “People are making it clear that if you stand with Donald Trump, you don’t stand with the electorate and we will vote you out.”

Hughes said he thinks this Democratic influx will have a huge effect on Carrigan’s campaign.

“We’ve looked at a lot of different pollings for elections. We’ve looked at how elections in this district have historically turned out for Democrats, particularly for candidates similar to Sean Carrigan, including, of course, Rob Miller, who came the closest to beating Joe Wilson.”

In the 5th Congressional District. Republican incumbent Ralph Norman will be running against Archie Parnell once again. Last year, Parnell lost by a slim margin, receiving 48 percent of the vote in a special election to fill the seat vacated by Mick Mulvaney when Mulvaney joined the Trump administration.

A former professional clown has also filed to run in the 5th. A circus clown for 31 years, Dartmouth graduate and long-time Democrat, Steve Lough from Camden is challenging Parnell for the party nomination. Lough volunteered on the Obama campaign and supported Hillary Clinton in 2016 before backing Bernie Sanders.

In the 1st Congressional District, either Republican incumbent and former governor Mark Sanford, Dimitri Cherney, formerly a Democrat, 0r Katie Arrington will be challenged by Democrats Toby Smith and Joe Cunningham in the fall.

However, there is still a steep hill to climb for Democrats in South Carolina.

“The political balance in South Carolina is still heavily Republican,” former longtime political correspondent for CNN Charles Bierbauer said. “Democrats will have to demonstrate they’re coming back into the state by winning more than one safe congressional seat.”