Will change follow after Columbia’s March For Our Lives? 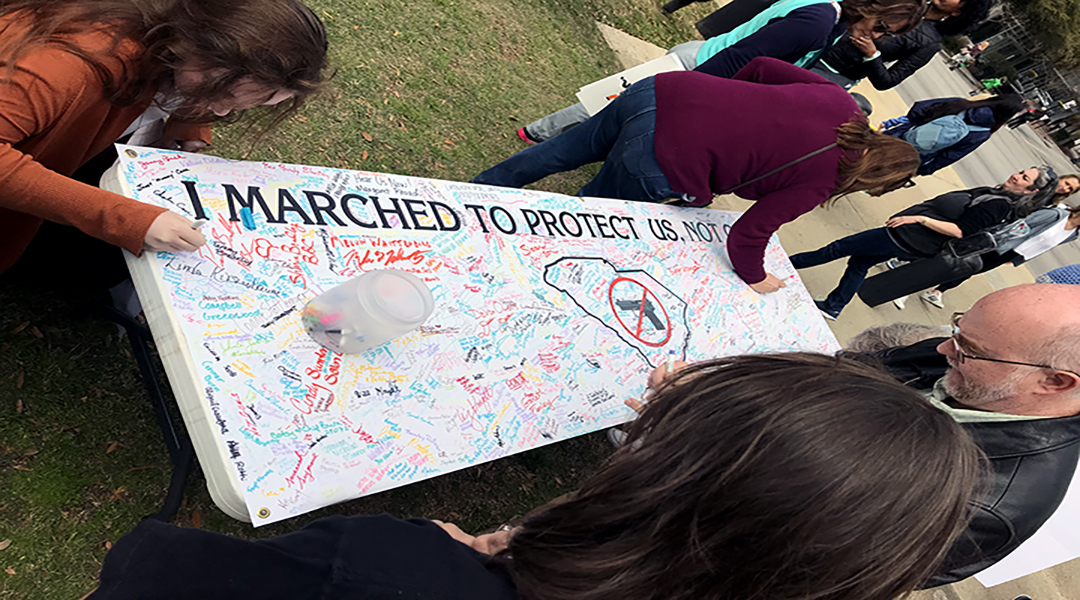 Protestors at the March 24 March For Our Lives in Columbia sign a banner in support of stricter gun laws. They hoped to present it to Gov. Henry McMaster to show the size of their support. 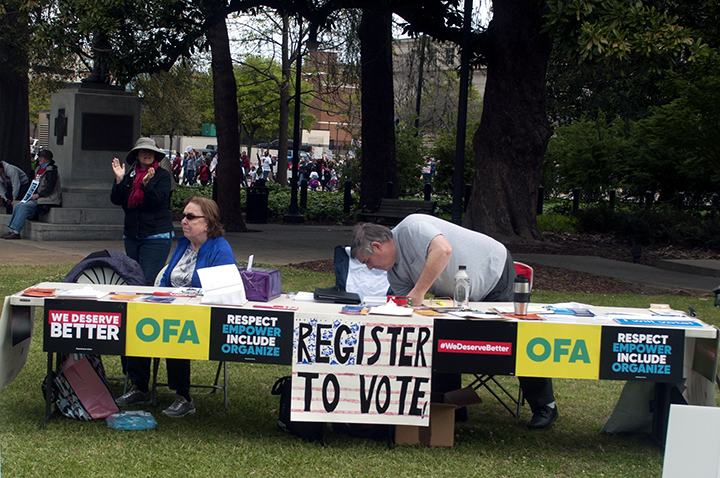 Voter registration tables were out on the grounds of the State House March 24 to encourage people to sign up to vote in the November elections. 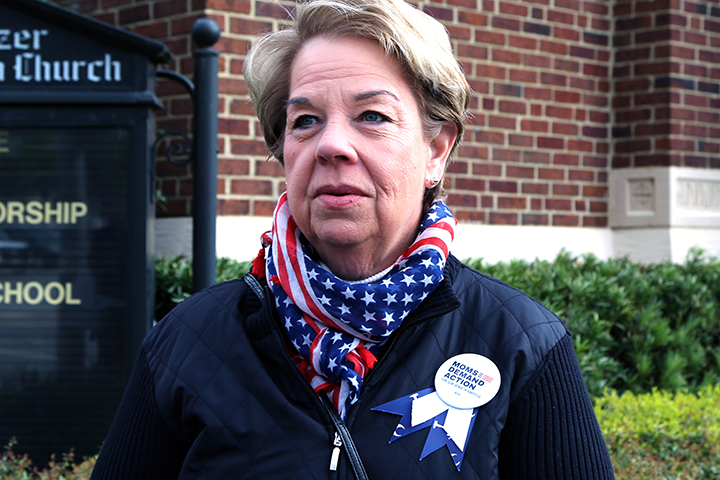 Darlene Mansfield says she is shocked by the increase in hatefulness in schools. She says her grandson had bullies tell him they will bring their father’s gun to school if he does not do what they say. 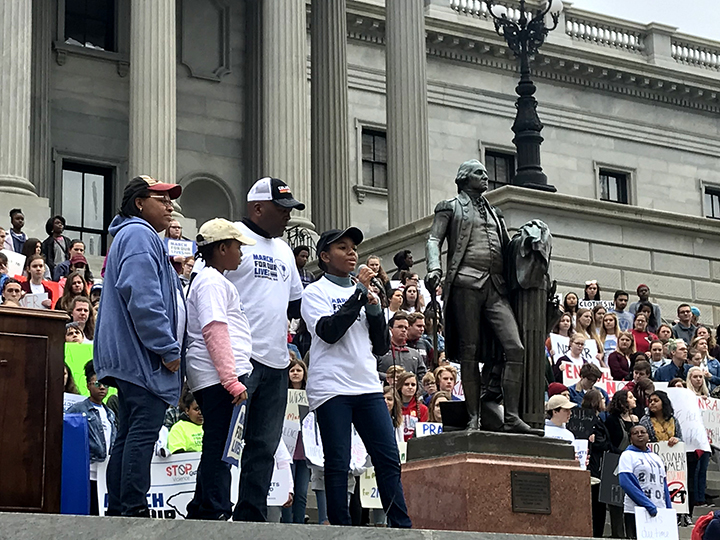 Columbia Mayor Steve Benjamin stands with the family of deceased state Sen. Clementa Pinckney, who was fatally shot in the Emanuel AME Church massacre in June 2015. 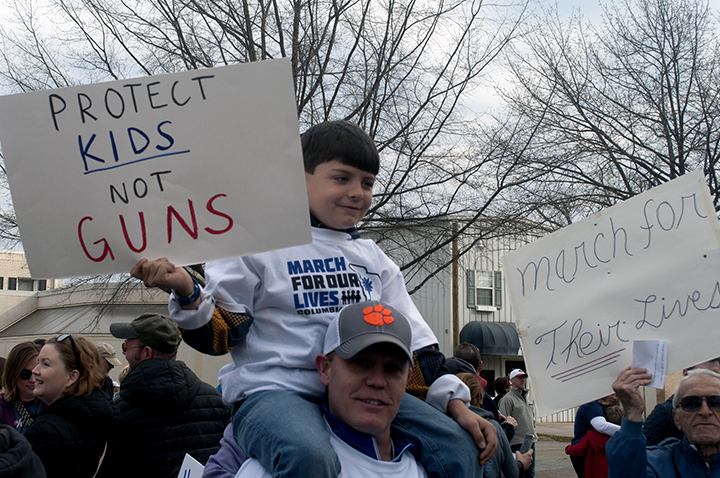 Many people brought their children with them to the March For Our Lives rally on March 24 at the State House in Columbia. 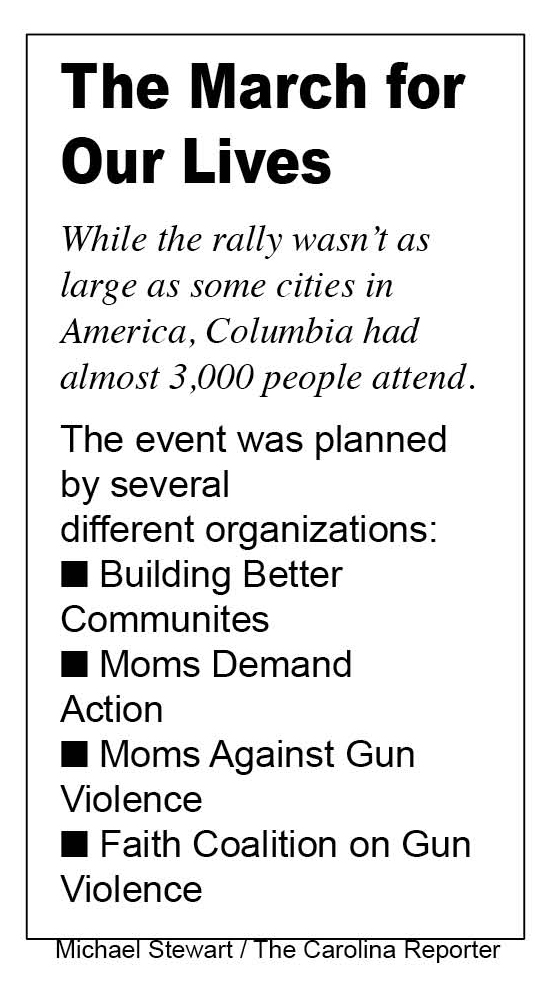 The March For Our Lives protests have sparked debate on gun laws throughout the United States. But should those hoping for restrictions on gun purchases in South Carolina expect the outcry of over 1.2 million protestors nationwide to have any effect?

Darelene Mansfield of Fort Mill, South Carolina, attended the rally at the S.C. State House because she’s terrified for her grandson’s safety.

“There’s bullies in school and you think, well, if they’re bullying you, what will they do next?” Mansfield said. “My grandson has even had kids tell him, ‘If you don’t listen to me or don’t do this, I’ll bring my dad’s gun.’”

In Columbia, the march began at the corner of Calhoun and Sumter streets March 24 and proceeded to the State House where almost 3,000 people gathered.

The event was organized by Building Better Communities, a Midlands organization that works with law enforcement to create better community relations, along with local chapters of Moms Demand Action, Faith Coalition On Gun Violence and Moms Against Gun Violence.

Sarah Hinnant, an 18-year-old Dreher High School student, led the march up Sumter Street and started chants of “Show me what democracy looks like” and “Vote them out.” Protesters also wielded signs expressing disgust with gun violence and the National Rifle Association.

March For Our Lives was precipitated by the Feb. 14 shooting in Parkland, Florida, and the demonstration in Washington, D.C., was dominated by the survivors from Marjory Stoneman Douglas High School. But for a protest with over 800 sibling events, the focus was larger than just gun violence in schools.

“My son was shot and killed in his community,” Roberta McKalvin from Moms Demand Action said. “We’re excited because this turnout is bigger than what we normally see. Finally legislators are taking notice.”

Pat Parise, a 1972 graduate of USC, was impressed by the largely student-run march to the capitol.

“I think this is a wonderful thing,” Parise said. “Every generation is a step in the right direction, and they can lay the groundwork for the next one.”

While the actual march to the State House was primarily led by high school students, the event that took place once the protesters arrived was guided by people who were decades removed from being in a classroom. The students stood on the steps while an emcee led the proceedings.

One of those speakers was Rep. James Smith, D-Richland, who focused on channeling the passion of the high schoolers on the steps to the ballot box in November. Smith, who is running for governor, told the students, “Your voice is heard the loudest and the clearest when you vote.”

The politician who may have heard those student’s voices the most was Gov. Henry McMaster. McMaster’s comments that students who participated in early school walkout on March 14 were “shameful” drew the ire of the entire crowd.

After the rally, Smith said the governor’s comments on the student protest were out of line.

“It was totally inappropriate,” Smith said. “As far as where the kids are coming from or funded, this a totally genuine movement. The only thing I can say to them is that as governor, I will stand with them, I’ll hear them and we’ll act accordingly.”

Smith was the only statewide political candidate to speak at the protest, but Democratic candidates for District 2, Annabelle Robertson and Sean Carrigan, were in attendance. Carrigan wore an event organizer shirt and one of Robertson’s daughters, Faith, a student at Heathwood Hall, spoke near the end of the rally. Neither candidate announced their presence politically at the rally.

For those who attended, the March For Our Lives was one of the most optimistic events in recent memory.

“I think it’s awesome. As an educator, it gives me lots of hope for our future,” Flo Jackson of Moms Demand Action said. “These students have said, ‘We are going to be here for the next few years, and if you aren’t with us we will vote you out.’”

The response from politicians, both in S.C. and nationwide, has been somewhat mixed. Many Democratic elected officials, like Smith, have been quick to praise the march and offer hope that it can impact change.

“There’s a lot of room for liberals and conservatives to come together on some common sense gun safety reforms,” Smith said. “There’s a whole host of things that I think are reasonable and appropriate.”

On the Republican side, the reaction has been either mum or negative. Sen. Lindsey Graham, R-S.C., did not offer comment on the protest, but defended the Second Amendment when retired Supreme Court associate justice John Paul Stevens called for its repeal in a New York Times column.

“Statements like this epitomize out-of-touch liberals who do not appreciate the important role the Second Amendment has played — and continues to play — in our nation,” Graham said in The State.

But Perry Bradley of Building Better Communities isn’t worried about politicians yet.

The next student-led protest of gun violence is set for April 20, when another school walkout is scheduled to take place.

For more photos and stories from Columbia’s March For Our Lives check out Larissa Johnson’s story here.