On Carolina Day, tweets and talk as USC lobbies for more funding 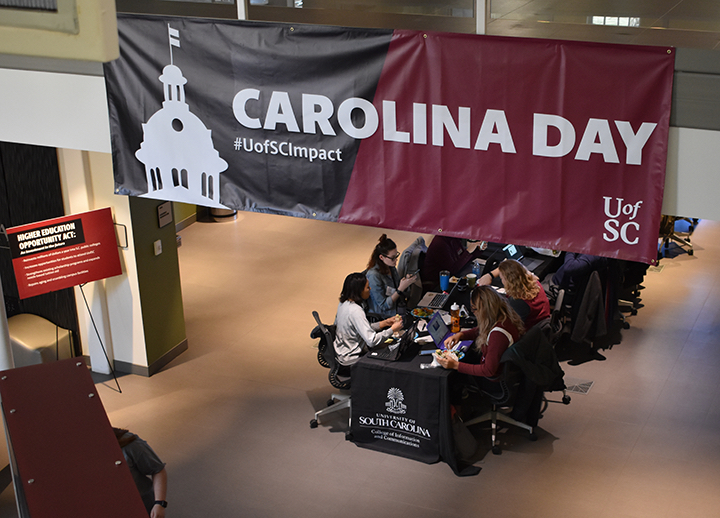 University officials, except absent university President Harris Pastides, lobbied state officials and promoted the school’s message that it was time for the Legislature to step up funding to ensure access to education for all of the state’s citizens.

State funding has steadily declined since the Great Recession, leading institutions to raise tuition significantly to make up the funding gap. South Carolina is near the top among Southeast states in tuition costs.

As the university mounted an intensive social media campaign, Student Body President Taylor Wright, alongside his counterparts from USC’s satellite campuses, met with Gov. Henry McMaster to discuss the bill and other issues facing the student body. McMaster declined to reveal whether he supported the university’s push for legislation known as the Higher Education Opportunity Act.

Wright also addressed a subcommittee meeting of members of the Senate Finance Committee. Ed Walton, USC’s executive vice president and chief operating officer, and other higher education officials from around the state also addressed the committee. The meeting was co-chaired by Sen. Vincent Sheheen, D-Kershaw, who is shepherding the legislation through the Senate.

“I want to get this thing accomplished … it’s the great education debate of 2019,” Peeler said.

The events came one day after teachers from across the state gathered at the State House to push for K-12 education reform. Speaker of the House Jay Lucas, R-Darlington, and Sen. Greg Hembree, R-Horry, have already announced matching K-12 reform bills.

Lobbying vet stands in for Pastides

Paula Harper Bethea, a familiar figure in South Carolina politics, was USC’s chief lobbyist and stood in as the university’s figurehead in Pastides’ absence during Carolina Day.

“I’ve been dancing for a while,” Bethea, chief advancement officer, said about her longtime involvement with Carolina Day. She participated in the event for the first time more than a decade ago during her tenure as president of the My Carolina Alumni Association.

Although she joined the university in a permanent position in July, Harper Bethea was working with the university as a consultant during last year’s Carolina Day, when the school moved to a more social media-focused campaign.

A civic and business leader in South Carolina for decades, Harper Bethea is also the director of South State Bank, served as commissioner of the S.C. Lottery Commission and helped to persuade legislators to remove the Confederate battle flag from the State House dome in 2001.

Bethea spent the day meeting with lawmakers to promote the Higher Education Opportunity Act, as well as a few other funds the USC system was asking for, including a $50 million bond bill to fund the school’s medical campuses.

Pastides absent for much of day

On one of the biggest days of the year for the University of South Carolina and its satellite campuses, the USC president, who is set to retire in July, was absent.

Bethea took Pastides’ place throughout the early stages of the day and provided some clarity on his whereabouts.

“I do want to say I bring greetings from the president of the university, who is traveling today. He will be with us later in the afternoon but weather certainly is holding people back in a lot of places.”

Pastides is traveling from the northeastern part of the country where temperatures are causing massive travel delays.

Pastides is expected to be back for a 6 p.m. reception Wednesday in the Alumni Center.

South Carolina lawmakers are realizing they have to work together to reform higher education and K-12.

Sen. Vincent Sheheen, D-Kershaw, who is fronting increased funding for higher education, believes that the education bills can work together. The higher education bill would take new funds from internet sales tax, but there are increases in funding that can be used for teacher salaries.

A newer area of legislation brought by Sen. Greg Hembree, R-York, last week is focused on overhauling education in K-12.

During the Senate Finance Special Subcommittee meeting earlier today, the issue of K-12 education came up alongside higher education.

“We’re not preparing them adequately for college in K-12. We’re losing the lottery money on them, so what do we do about cost control?” said Hembree, Chairman of the Senate Education Committee.

“There’s certainly time to do improvements in K-12 and in higher education. I think we do need to stay focused on things that matter,” said Sheheen.

Hembree echoed Sheheen’s calls for bipartisanship when dealing with education.

“I don’t see them as mutually exclusive, I think we can certainly work on them at the same time. You get into funding questions, and that can get a little dicey,” said Sheheen.

Since the K-12 reform bill was just filed, this was the first meeting where it factored in. Education comes up yearly, but coupled with loss of teachers, their desire for increased salary and extra funding, Hembree believes there is potential for this bill in 2019.

University of South Carolina Student Body President Taylor Wright seized an opportunity with Gov. Henry McMaster to raise a question about diversity on campus, particularly on the Board of Trustees.

“The governor has recently had two appointees and I thought it was a great opportunity to expand that diversity but that did not happen,” Wright said. “For him, as well as future governors to consider, to do everything they can to expand the diversity of our board to make sure that we’re representing the Columbia campus and all of our campuses. And the makeup doesn’t match what it is right now.”

In response, McMaster said diversity was something that he had considered, but since the governor is only allowed two appointees, it would be worthwhile to raise the question of diversity to the legislature, who appoints the majority of the board.

Wright said that diversity is an important issue that needs to be addressed, especially as USC lobbies for higher education funding and more affordable tuition for South Carolina students. 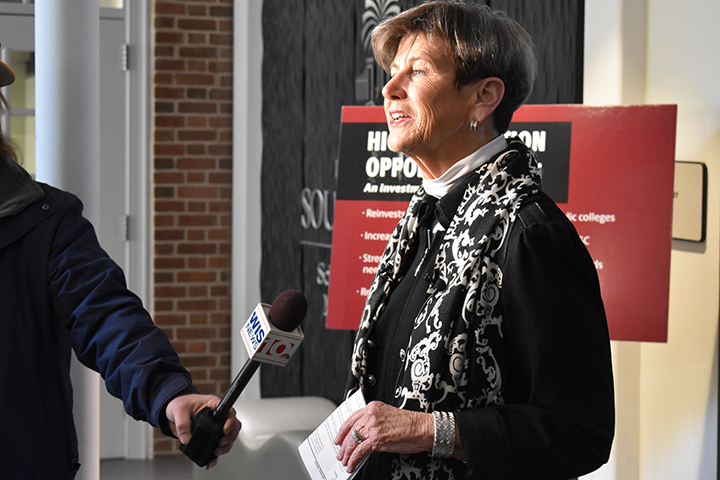 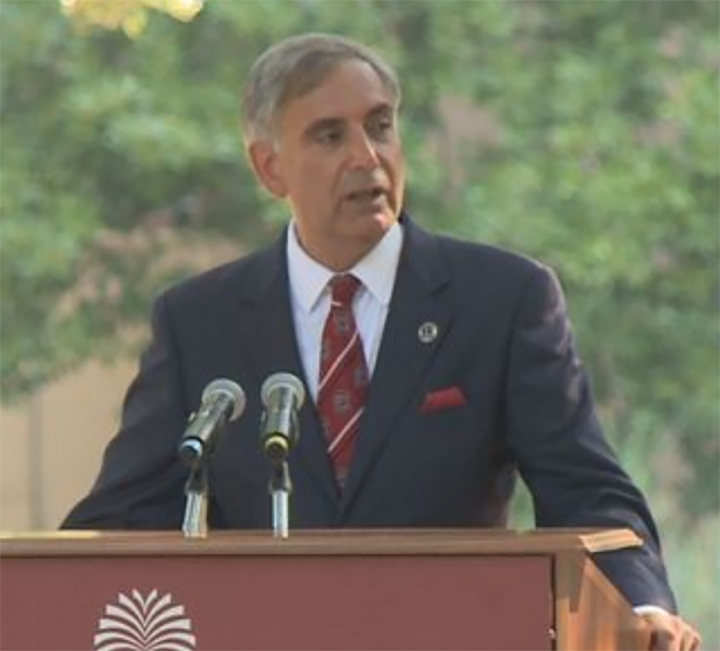 USC President Harris Pastides was absent from Carolina Day festivities, but other university officials said he will be hosting an evening reception. (Courtesy of Creative Commons) 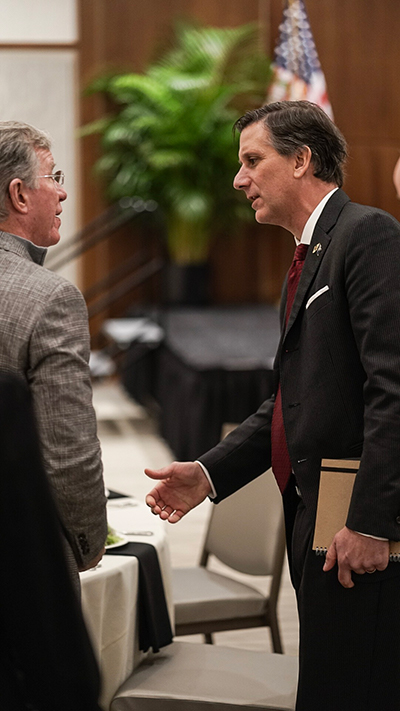 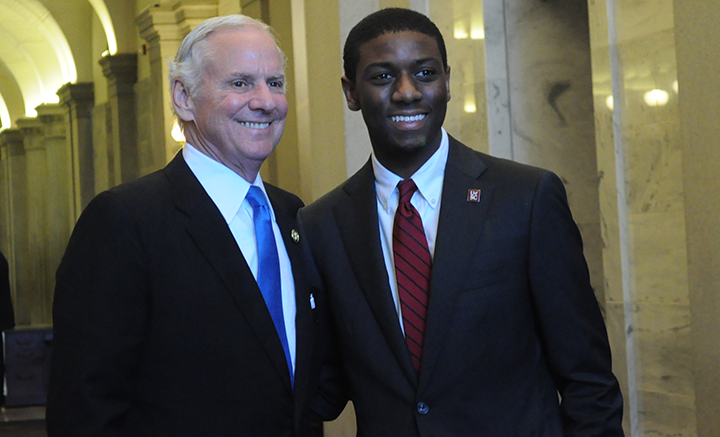 During a meeting with Gov. Henry McMaster, Student Body President Taylor Wright addressed the lack of racial diversity on the board of trustees. (Photo by Jenna Schiferl)