One year later: remembering when the sports world stopped turning 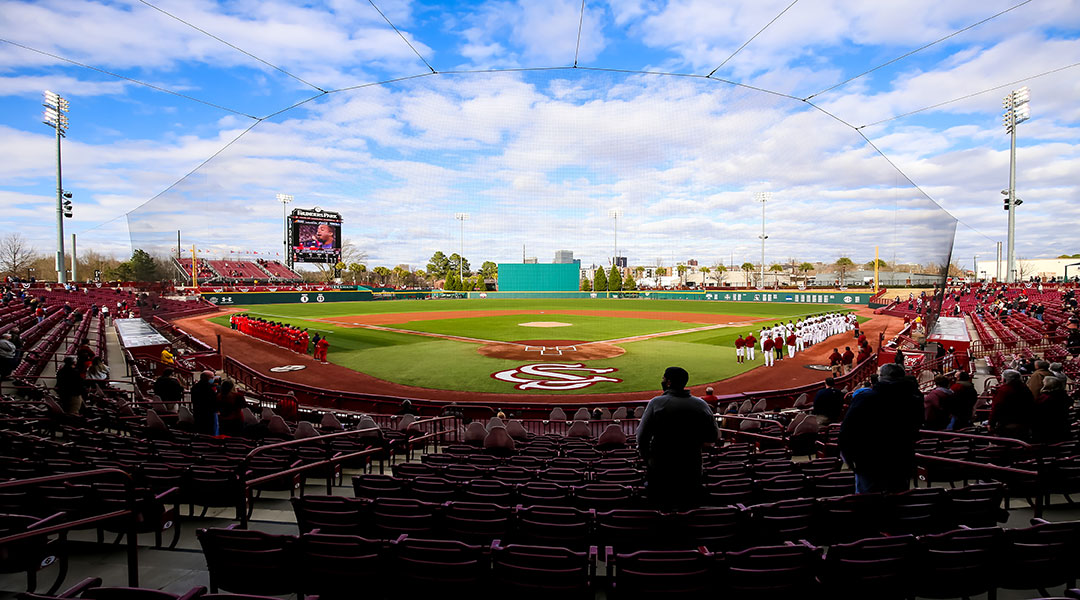 This season, no more than 2,100 fans are allowed in the stands at Founders Park, that’s 25.4 percent of the stadium’s usual 8,242-person capacity. Photos courtesy: South Carolina Athletics.

There are certain moments in history when people remember exactly where they were and what they were doing when they heard the news. For some, it was the assassination of President John F. Kennedy, for others it was the resignation of President Richard Nixon. For another generation it was September 11, 2001. For everyone associated with sports, it was March 11, 2020.

The Utah Jazz and Oklahoma City Thunder were seconds from tip off for a game scheduled for 8 p.m. EST. Around 8:25 p.m., the teams were sent back to their locker rooms with the game having yet to start.

Thunder and Jazz players were sent back to the locker room as officials wait for confirmation from the NBA to start the game. pic.twitter.com/xW9sC7OKN7

Breaking: The Thunder-Jazz game has been postponed to a later date, per the NBA. pic.twitter.com/4z8liN5Kra

The NBA has suspended the season.

“That was significant in the sports world,” South Carolina athletics director Ray Tanner said Wednesday. “The impact was going to be felt far and wide.”

Tanner was in Nashville for the SEC Men’s Basketball Tournament this time last year. He was in a meeting with the other 13 SEC athletics directors at a hotel when commissioner Greg Sankey called.

“All of a sudden the meeting was brought to a halt. Commissioner Sankey was on the phone,” Tanner said. “We knew there was something that disrupted our meeting. We didn’t know the magnitude. Of course, soon thereafter the tournament was canceled. Everybody was sent home. COVID was upon us. It was very confusing. It was perplexing.

“At first, before we got the news of the virus, of COVID-19, I didn’t know what might have happened,” Tanner said.

ALERT: Based on the latest developments and the continued spread of the coronavirus (COVID-19), the Southeastern Conference today announced the cancellation of the remainder of the 2020 Men’s Basketball Tournament in Nashville.

South Carolina had a busy athletics schedule that weekend, or at least they were supposed to. In addition to the men’s basketball tournament, the baseball and women’s and women’s tennis teams were getting set to face Tennessee, the softball team was getting ready to host LSU, Track and Field was set for the NCAA Indoor Championship and beach volleyball was getting set to host the Carolina Classic.

Hours after the SEC canceled its men’s basketball tournament, the NCAA announced it was canceling all winter and spring championships.

“Thinking it was my last year, I really wanted a chance to finally bring home the SEC Championship after two years of being so close,”  senior golfer Lois Kaye Go said at the time. “I was looking forward to competing for the NCAA Championship for the only time in my college career. Our season being cut short meant that I would not be able to do any of that… I was devastated. It didn’t feel real at the time and I was still in denial and shock. I couldn’t believe that this was how my college career was going to end.”

Luckily for Kaye Go and other seniors, the NCAA quickly decided to give every spring athlete an extra year of eligibility.

The NCAA will grant an extra year of eligibility for student-athletes who participated in spring sports. pic.twitter.com/vCRLzhSOe0

Silvia Chinellato was already more acquainted with the virus than some of her U.S. teammates. Her family lives in Italy, which had already seen over 12,000 cases by the time her season was canceled.

“My family in Italy experienced coronavirus before we did and how they were living was absolutely awful for two months,” the fifth-year tennis player said.

Despite the massive death and caseloads in the past few months, sports have returned, in a way.  At Colonial Life Arena, about 3,500 fans were welcomed to watch basketball. Some of those who were able to enter the arena, and many more who weren’t, would argue that men’s basketball coach Frank Martin’s 6-14 record this season should be at the top of his priority list.

He disagrees, and suggests the impact of this pandemic year is far bigger than one season of hoops.

While athletes have returned to action, it isn’t life back to normal. There are still South Carolina student-athletes that are testing positive, despite the precautions in place.

“As we’re talking on the phone today, we still have some athletes that are in quarantine or tested positive,” Tanner said. “The numbers are lower, but we still have the reality of it that it hasn’t gone away.”

Women’s Tennis head coach Kevin Epley has seen first hand the battle that is going on across the globe.

“Tammy, my fiance is a respiratory therapist,” Epley said. “People don’t think about respiratory therapists that much. But all of a sudden, they’ve been thrust into this role where they’re the soldiers in this war we’re all in. I mean, they are the ones that are operating the ventilators.”

Before his season started, Mark Kingston, head coach of the Gamecock baseball team, reminded people who are really facing pressure. It isn’t the pitchers who need a strikeout to win the game. It’s people like Tammy.

While progress continues to be made and case numbers are decreasing, Tanner urges people to stay vigilant. In sports, the game isn’t over until there are zeros on the clock. The pandemic won’t be over until the positivity rate hits 0.0 percent.

“We got some attendance to the spring events. We hope that we will be at full capacity in football,” Tanner said. “We do have some optimism that we went through a number of months that we really didn’t get a lot to be optimistic about on a daily basis. We’re in a better place now, but as I said before, we’re not home free.” 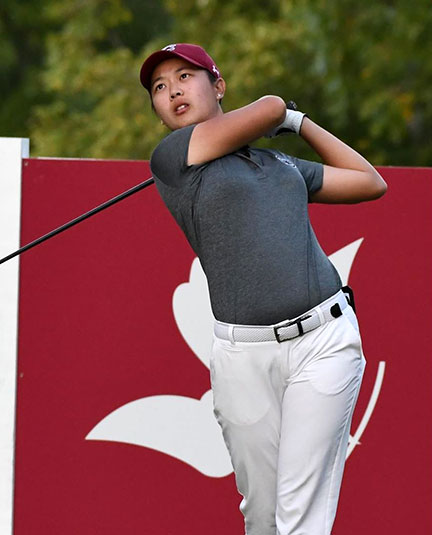 Golfer Lois Kaye Go is South Carolina’s career leader in scoring average at 72.60 and was named the SEC Scholar Athlete of the Year last year. 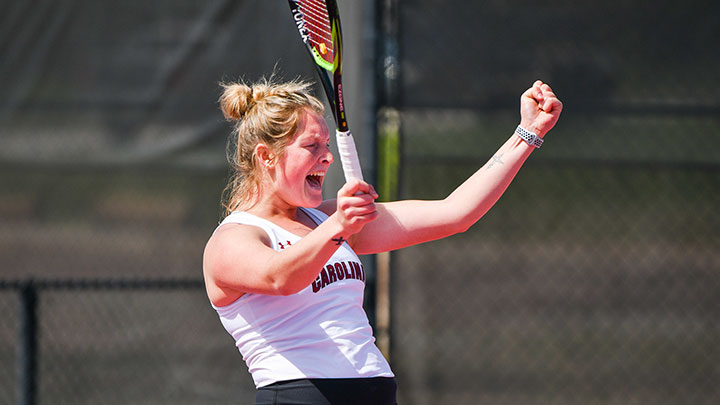 After a slow start to the spring, Silva Chinellato began SEC play with a 4-0 record in singles before her season was cancelled. 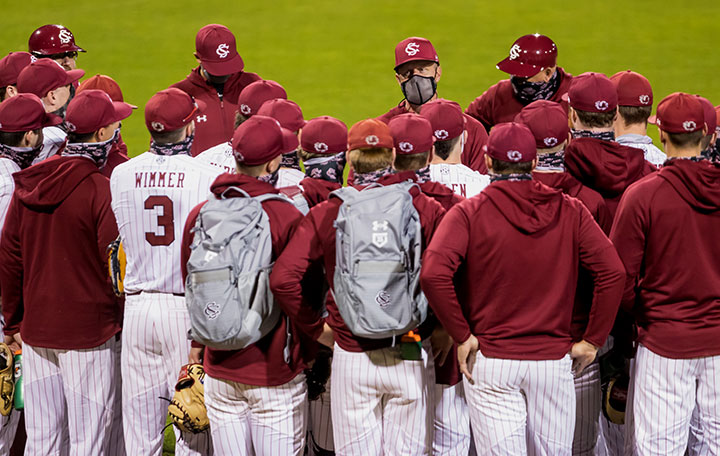 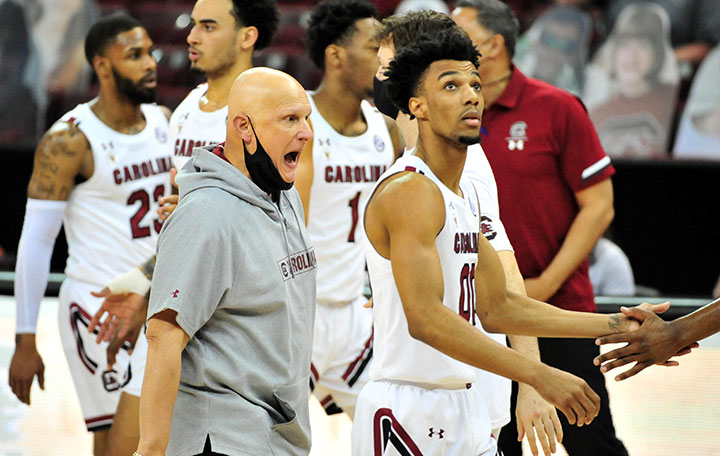 Frank Martin saw the 2020 SEC Men’s Basketball Tournament cancelled before his team even had the opportunity to play.