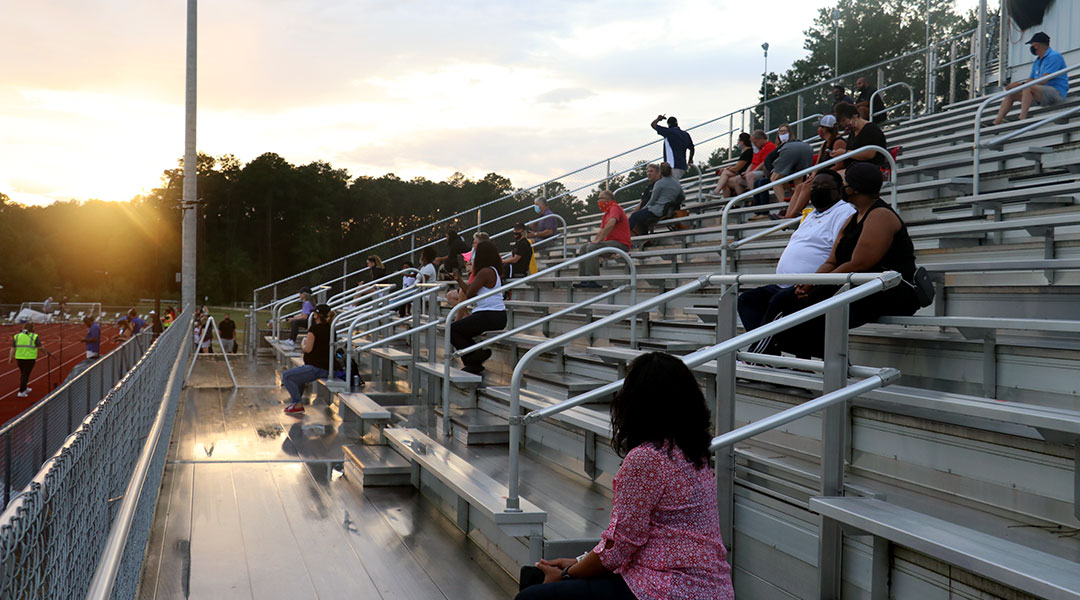 Cardinal Newman fans are social distancing as there were limited seating in the stands on Sept. 11.

By Samantha Winn and Shelby Beckler

This wasn’t your average Friday Night Lights football excitement. There were no posters, no student led chants, no student section.

On a humid September night, parents at Cardinal Newman High School found themselves spread out on bleachers, cheering alone for their children, another sign that life has altered amid the coronavirus pandemic.

“It feels good because we haven’t had sports in so long, but it is also kind of sad as well because most of the players can’t have as much family as they would like here,” Terria Chandler, fiancé of assistant football coach Ronald Bettis Jr., said.

Not many in the stands 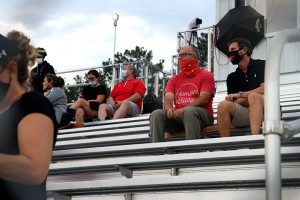 The metal bleachers were half filled with family members at Cardinal Newman Friday night. Each player, cheerleader and band member were limited to two tickets for their families.

Despite the stadium being under capacity, cheers and small talk allowed the first football game of the season to feel somewhat normal. But there were sure signs this wasn’t a typical game: By the third quarter, Chick-Fil-A sandwiches dropped to half-price. Fan favorites like fresh popcorn and snow cones were missing from the selection because of COVID-19.

“It’s definitely fun, at least for me,” Jackie Jordan, mother of football player, Pierce Korpack said. “I still have a child out there playing, but definitely the atmosphere is a lot more subdued because the students aren’t here.”

Even for away games, the parents are the only fans now in attendance. Heathwood parents were in the stands supporting their children.

“I feel like they are doing good at keeping the safety going at the stadium, but at the same time, as long as I am keeping myself safe I am keeping everyone else safe as well,” Chandler said.

Chandler said Bettis is excited for the season even though moments of coaching will be stressful due to the limited number of players allowed during practice. 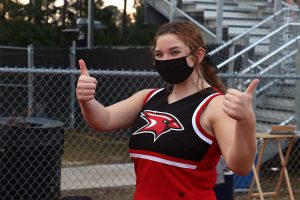 Senior cheerleader Catherine Parnell giving a thumbs up while standing on the sidelines.

The marching band is now in a corner of the track near the end zone. The cheer team is still on the sidelines, but more spread out without the ability to stunt and tumble.

But when senior cheerleader Catherine Parnell looks up into the stands, she is reminded of the absence of her peers.

“Our students are a really big part of creating that atmosphere with us, cheering with us,” head cheer coach at Cardinal Newman, Morgan Lea Daniels, said.

“Cheer-wise it’s a struggle because the parents don’t always listen and having your peers in the stands because they will respond to you,” Parnell said. “The players feed off of their energy more than their parents obviously.”

Cheerleaders are having to make compromises in their social life for the health of their team. As a result, Daniels is creating more team bonding memories to make up for the lack of events.

“We are just trying to look for opportunities to how we can make it as normal as possible while still keeping the kids safe,” Daniels said.

The marching band made special masks and bell covers for their instruments.  Junior drum major Danielle Raynor said it feels good to be back in a routine.

“It’s definitely different,” band director Jordan Finley said. “There is obviously less noise, which kind of affects the energy, but I don’t think the kids mind that much. I think they are just happy to be here and happy to be doing something that they like and are together.”

Action on the field 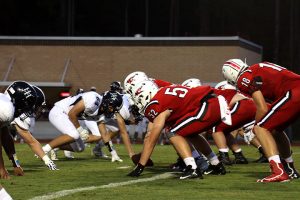 The playing field for Cardinal Newman was normal. The Cardinals defeated the Highlanders 40-7.

In between series, offensive and defensive groups met on opposite ends of the field. The athletic and student trainers are handing out individual cups of Gatorade check this word in between plays and have gallons of sanitizer right beside the benches

Players are expected to wear masks on the sideline and at practice except during the game. The helmets now have small plastic shields that cover their forehead and eyes. Athletic trainer Heather Key said that the team is doing their best to stay sanitary even though football is a contact sport.

Unlike the typical social distancing guidelines, Key’s job is to help maintain the health of athletes. Key and her staff wore masks and gloves on the sideline and helped tape up athletes for the game.

“Typically, before a game it’s an absolute madhouse in the athletic training room, everybody is trying to get taped so we’re trying to limit about two to four kids,” Key said.

The normal sounds of referee whistles, calling plays and shoulder pads colliding remained constant on the Friday night. Cardinal Newman’s Head Coach Daniel Burack said these games are a chance for kids to have some normalcy.

“The kids have done a great job of doing what we need to do to play and they understand that they are going to be careful off of the field to protect each other on the field,” Burack said. Cardinal Newman athletics is not requiring tests.

“The outcome isn’t what we want but we get to do what we love,” Burack said. “I think athletics is a great opportunity for young kids to learn and it’s part of their education. There are so many crazy things going on in the world, and for a little bit, they get to be somewhat normal again.” 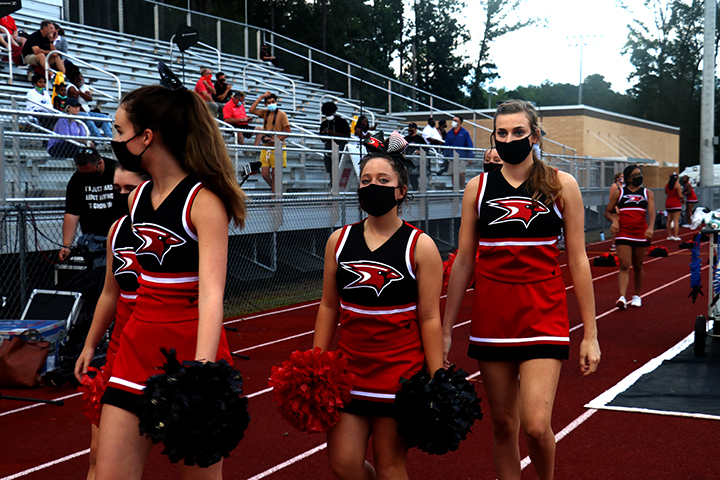 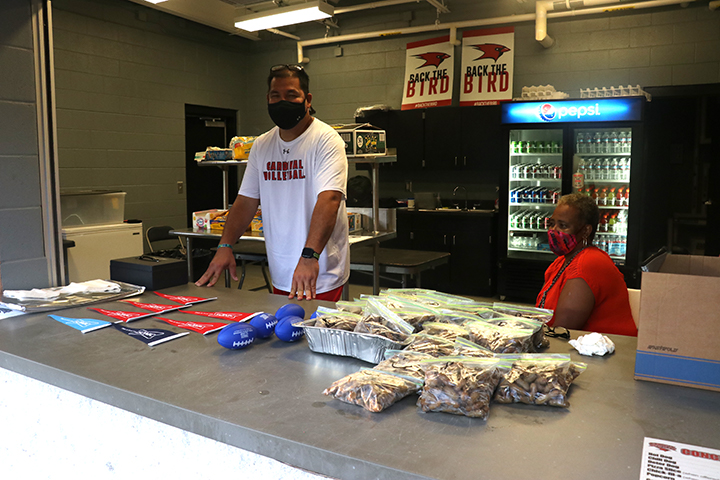 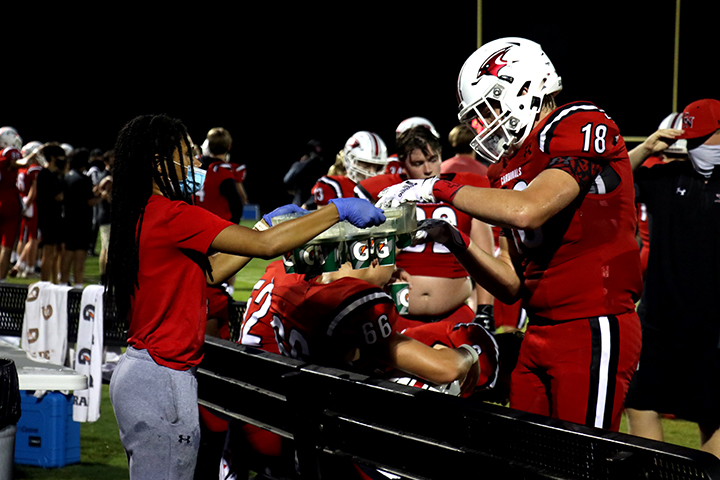 Student athletic trainers hand out single cups of water in disposable Gatorade containers during timeouts and different periods on the Cardinal Newman sidelines.