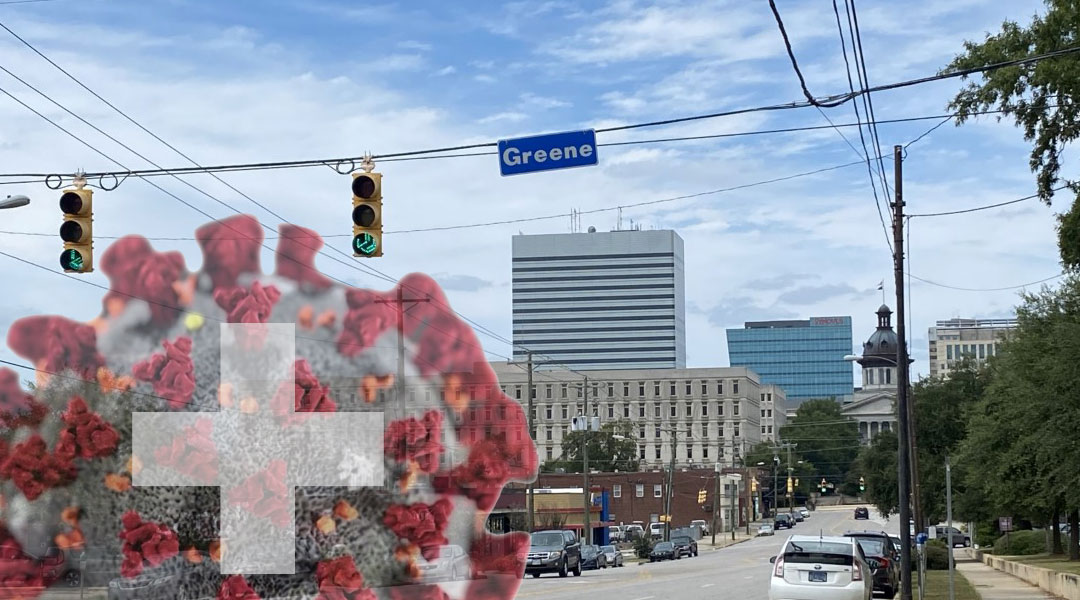 South Carolina has surpassed 126,000 COVID-19 cases since March and suffered more than 2,900 deaths.

Unnerving. That’s one way to describe how life has been since March in a world turned upside down and inside out by the coronavirus pandemic.

Being more comfortable at home

Newton, of Columbia, says he has been more productive since March in both his classes and his everyday life.

“Instead of being in an apartment, I was more comfortable at my house,” Newton said. “My parents both worked, so I had the house to myself and didn’t have to share with a roommate. I was able to focus more.”

Newton also said he had a more streamlined schedule while being home because he helped his parents take care of their three dogs.

“I would have to wake up and walk them, so I would start my day earlier instead of waking up at 1 p.m.,” Newton said.

Newton knows he was lucky to be able to socially distance at home with his parents and concentrate solely on college during the spring 2020 semester.

He is mindful that the pandemic has been stressful for millions of people with the loss of loved ones and friends, loss of jobs and stressful work hours, especially for those in the healthcare field.

According to the U.S. Bureau of Labor Statistics, the unemployment rate increased to 14.7 percent in April, the highest since the Great Depression. It has since fallen to 8.4 percent in August.

However, the U.S. COVID-19 death toll and case count continue to rise by the minute. Those numbers are currently 188,000 and 6.2 million respectively.

Other USC students, including third-year pharmacy major Paisley Kinlaw, found their silver lining in an alarming pandemic just like Newton.

Kinlaw, of North Myrtle Beach, South Carolina, said she saved money because she stopped eating out, which allowed her to eat more home-cooked meals every day with her family.

“We all got to spend quality time with each other,” Kinlaw said. “We did not have anywhere to go, so we binge-watched Netflix and watched movies. It made us grow as a family.”

Kinlaw said she also exercised every day for an entire month.

“I didn’t have anything else to do, so I thought I might as well focus my energy on something productive,” Kinlaw said. “It changed my mindset. I figured I needed to better myself, especially when I have all of the time in the world to do so.”

Fourth-year business management student Carson Adams says she also has been exercising with yoga routines during her free time. She cancelled her gym memberships to save money when gyms were closed and continued her workouts at home.

Having to switch to virtual lessons meant she could teach kids outside of Columbia, in addition to her local students.

“I got to know many kids from ages 5 to 14,” Adams said. “It was a lot of fun, and we were thankful we reached more people and taught them life lessons and martial arts.”

The pandemic has also caused Adams, like many others, to sanitize more often and be extra cautious when coming in contact with germs.

“Not that I wasn’t clean before, but anywhere I go, I use hand sanitizer and wipe surfaces down,” Adams said. “I don’t think that’s ever going to go away now, so I’m going to be hyper-aware of that.”

For fourth-year biology student Kasie Roark, the pandemic has caused her to be more sensitive to her surroundings.

“One positive of this pandemic is social awareness and how close you are to people,” Roark said. “Even before March, I felt it was important to give people space and respect their personal bubble.”

Roark, of Union, South Carolina, also added that her hometown economy has improved because people do not want to travel as much.

“There’s only one bar in Union, and most people usually drive 45 minutes away when they go out at night,” Roark said. “The pandemic has caused people to stay local and spend money in Union because bars are now closing at 11 p.m.”

Whether someone is focusing on the negatives or the positives due to their personal circumstance in this time of fear and uncertainty, the most powerful components of human nature can prevail. The ability to adapt and adjust will be a key factor in the months and years to come.

Fourth-year accounting student Thomas Newton discusses how he was more comfortable at home during the COVID-19 pandemic.

Third-year pharmacy student Paisley Kinlaw talks about how she spent more time with family over the last six months.