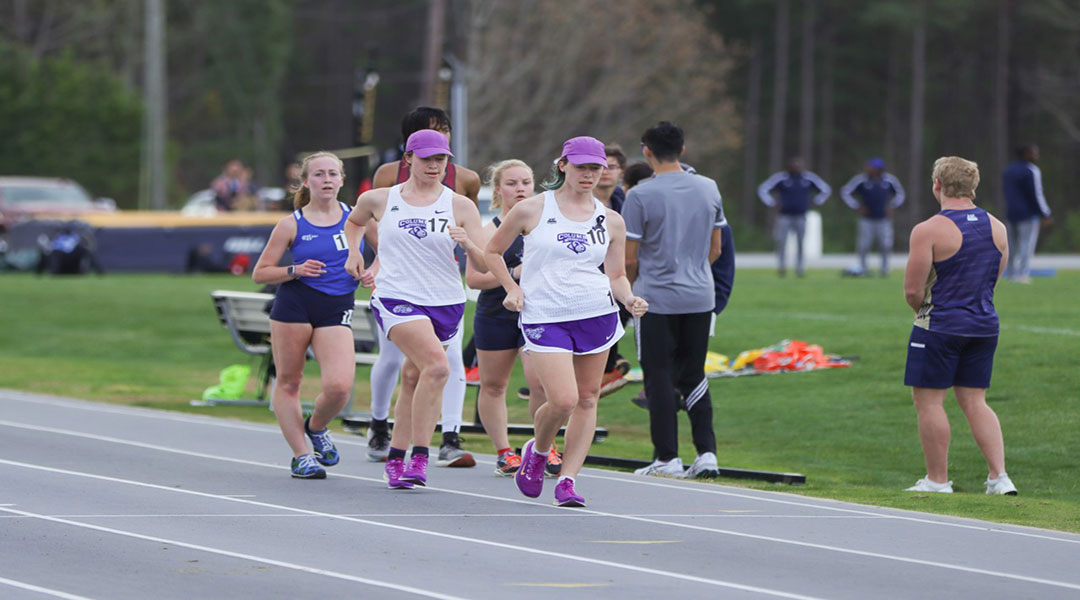 Jesi and Tori Heiser-Whatley are in their junior season at Columbia College. This season they have competed in the NAIA Indoor Nationals and the AAC Indoor Championships. Photo courtesy of Columbia College Athletics.

When Jesi and Tori Heiser-Whatley went to the park as young kids, they didn’t just swing on the swing set or play hopscotch. They racewalked with their athletically-accomplished parents.

Now the twins are racewalking at Columbia College where they have won medal after medal under the guidance of their track and field coach, who just happens to be their dad.

“When your father goes out to train all the time and you want to be around him, the only way to do that is to train and then get faster,” Jesi Heiser-Whatley said. “We’ve been doing it a long time.”

Racewalking is a long-distance track event where athletes must walk, not run to the finish line. The sport originated in the Victorian era, made its way to the United States in the late 19th century and has remained a mainstay in the Olympics since 1904.

For Jesi and Tori, the sport has been a family affair since before they were even born. Their parents, Ian Whatley and Susan Heiser, have racewalked since their teens. The couple met at a racewalking clinic.

Growing up in a household where the sport played a prominent role, the twins started racewalking since they were “seven or eight” years old, they said.

The NAIA sport is a rarity on most college campuses. Columbia College has sponsored racewalking since the Appalachian Athletic Conference introduced the sport in 2018.

The twins, 22, said the experience of having a racing partner who is also a sister brings a whole different dynamic to their experience.  The sisters say racing with each other gives them a sense of similarity knowing someone else on the track and making it feel more like a team sport. There are nine on the racewalking team at Columbia College.

“It’s enjoyable,” Tori Heiser-Whatley said. “It’s very fun to get to race with my sister. It’s fun to see her progress and grow as an athlete and be there and be a part of the process.”

Having a twin also keeps Jesi and Tori competitive, but in a fun way, according to Tori. Along with competitiveness, Jesi said having her sister also incites encouragement between the two.

“It’s a lot easier to help encourage each other because we know what helps and what might not help as much,” Jesi Heiser-Whatley said. “And I’ve always found it helpful to crack a joke at Tori every once in a while.”

Along with each other, the twins also have the help of their parents at Columbia College. Whatley has been the racewalking assistant coach for the Koalas since 2019 and Heiser has helped put together schedules for the racewalkers.

In addition to coaching them, Whatley and the twins have also put together a video on how to racewalk, which has garnered over 200,000 views and has been translated into Hindi, Russian and Spanish.

Whatley, an assistant track and field coach at Columbia College, described training the racewalkers as a hobby but joked that coaching the twins is “impossible” at times, given he is their father. However, Whatley, who is from England, believes Jesi and Tori have matured since they first started competing.

“They’re getting to a stage where they’re deciding for themselves what level of success they want and they understand that what we’re telling them is right, even if we are their parents,” Whatley said.

While the sisters are nationally-ranked, Whatley said he is most proud of their academic achievements and their ability to find a balance between school and racewalking.

Whatley is also impressed by the twins’ leadership and their willingness to go above and beyond for the team. Jesi and Tori often do events outside of racewalking to help give the team an extra boost.

Wright and Huggins said the twins have helped them out a lot athletically, making sure they get their stretches in and keeping them knowledgeable as an athlete. However, their relationship with Jesi and Tori extends off the track.

The track quartet has known each other since their first night on campus and are now suite-mates. Huggins said it didn’t take long for them to form a friendship.

“We slowly got closer to each other and then we realized that all of us are goofballs, absolute goofballs,” Huggins said.

Wright said living with the twins is nothing but laughs and fun. Thanks to their proximity, the four can group up anytime to help each other out with homework or even give witty commentary while they play video games.

Wright said the thing she admires most about them is the friendship they share.

“[I admire] their goofy side,” Wright said. “Their ability to be able to balance the stress that we’re all under and still somehow manage to make everyone laugh.”

When it comes to the sport of racewalking, both twins describe it as a family affair, being able to race with their sister, seeing their family in the stands and keeping each other in the right mindset.

However, Jesi says that family in the sport goes beyond her sister and parents.

“I feel that the community of racewalking is family because it is such a small community,” Jesi Heiser-Whatley said. “It’s such a lovely community and a lot of us are weird, funny, wacky in a way and it’s so friendly and inviting that I feel at home in it.” 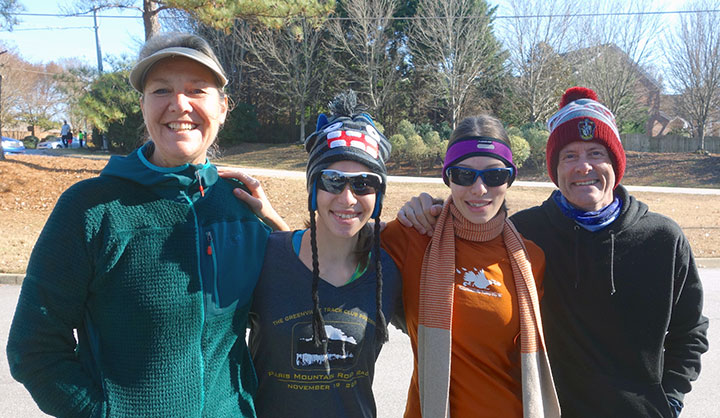 The twins’ parents, Ian Whatley and Susan Heiser, are also accomplished racewalkers. Whatley was a member of the U.S.  racewalking team for over two decades and Heiser is a two-time national junior U.S. team coach. Photo courtesy of Ian Whatley. 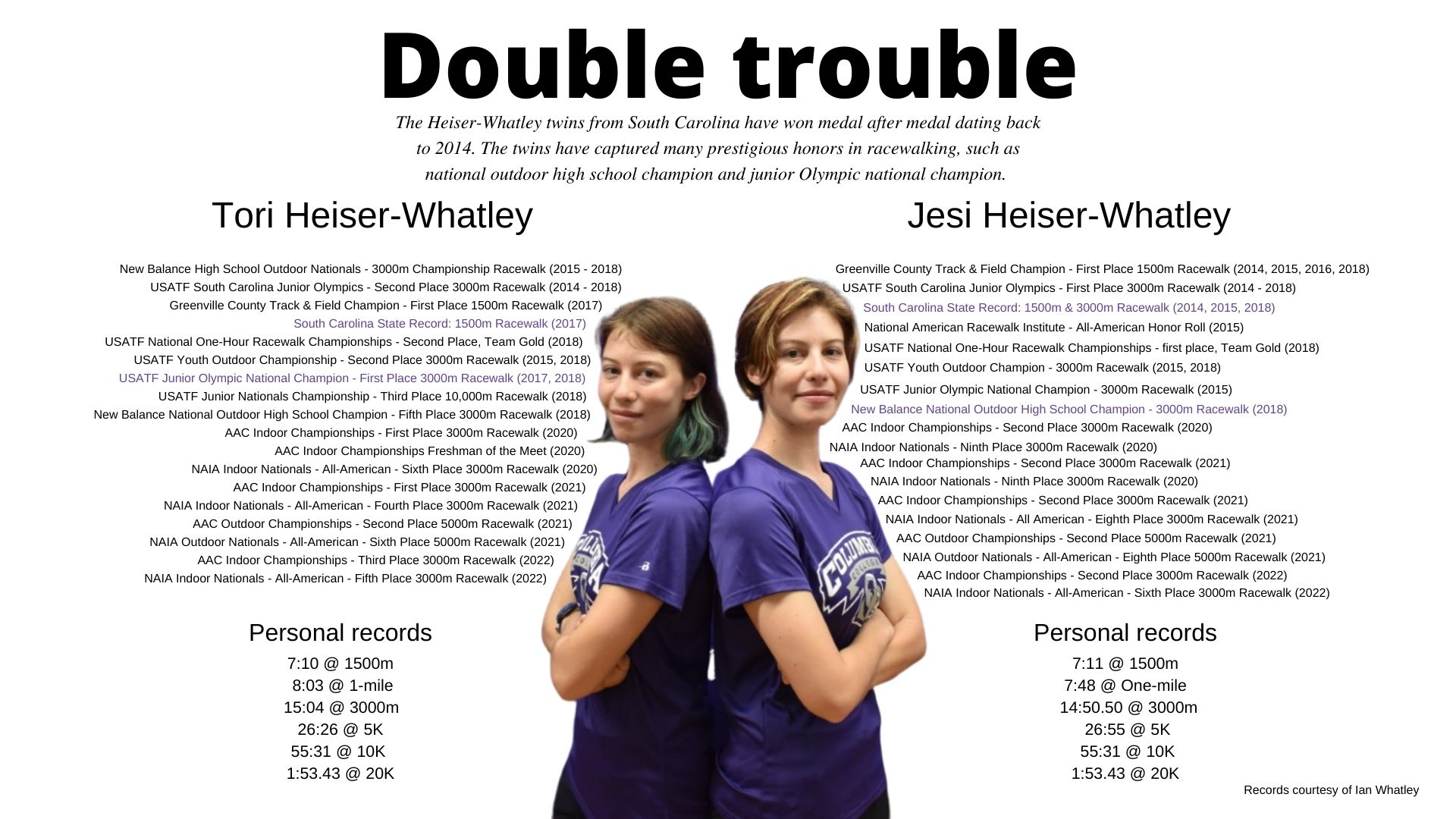