Richland County coroner does not let past define her 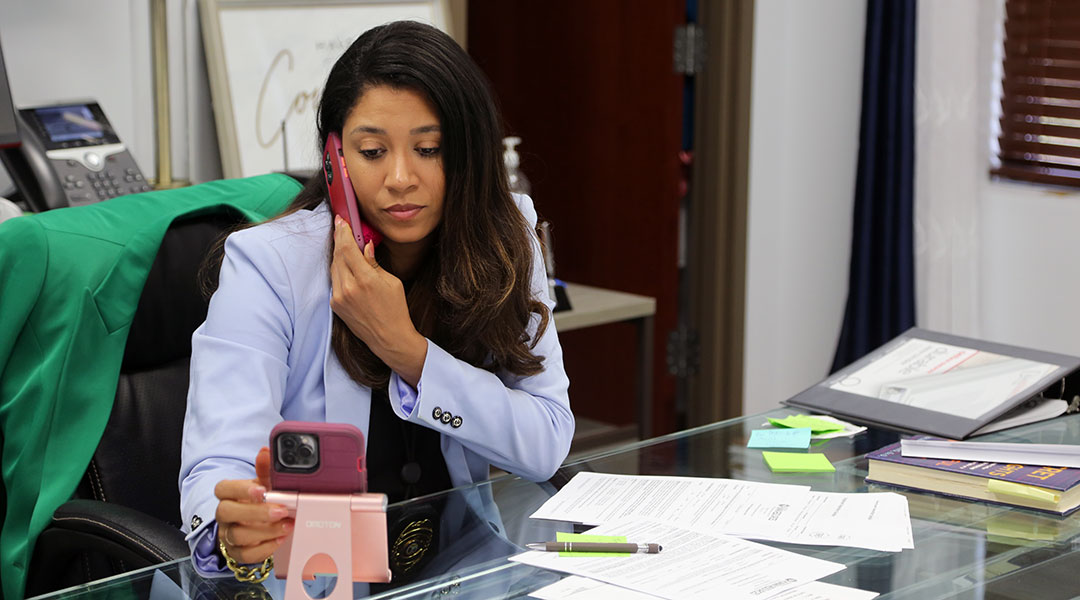 Coroner Naida Rutherford has overcome a turbulent past to become one of the most high-profile employees in Richland County. She is a mother of two and a business owner. Photos by Ashley Miller

Naida Rutherford, the first Black woman elected Richland County coroner, said she has succeeded because she absorbed tough lessons from her negative experiences as a kid in foster care.

“I am not quite sure what age I was put into foster care, but I do know that by the age of three, I had lived in several homes, different families,” said Rutherford, who also recounted suffering abuse as a child and homelessness as a teenager.

Growing up in Bartow, Florida, was not easy for her, she said. Just two days after graduating high school, she became homeless. She had a hard time finding places to sleep, she recalled. She said many times she did not know if she would be safe when sleeping at night or where her next meal would come from.

“When you grow up in an environment like I did, you’re dealing with very adult things at a very young age,” she said.

As a public servant, Rutherford tries not to dwell on her past as she engages in one of the most high-profile jobs in Richland County.

Since she took over as coroner in 2021, she has had to deliver horrible news to families and to the community. Rutherford has had to determine whether twins, who were left in a hot car last summer, were victims of foul play. She has had to meet with families to discuss the cause of the death of a loved one and then explain the information to the public at press conferences on the same day.

Two weeks ago, she was at the podium explaining the shooting of a mentally ill Richland County man shot by a Richland County deputy responding to a domestic violence call.

Richland County Sheriff Leon Lott said Rutherford is very humble and that the public can see she cares for the community as a person and coroner.

“She is a nerd with a sense of fashion,” he said. “She keeps a positive attitude on and off the scene to make families feel safe.”

Her colleagues in the coroner’s office describe her as a woman with energy and compassion. While she wears a brown and beige uniform during the day, she is known for her fashion sense and has her own boutique business, Now&Then, on Lady Street.

“It was a breath of fresh air when she came in as coroner,” Shawn Sears, deputy coroner for Richland County, said.

When Rutherford defeated longtime coroner Gary Watts, Sears said he worried he might lose his job.

“She came in, told us she was not going to fire anyone and she let us know that her door was always open for us,” he said. He said she also reduced paperwork in the office and raised salaries.

Rutherford said that her goal as coroner was to make the work place like a family.

“When she walks into the room she is there to take care of you 110%,” Sears said. “She tells us every meeting that she loves us.”

Rutherford came to South Carolina as a teenager, moving with the family of a high school friend who hoped to attend the University of South Carolina or Benedict College. Although she did not know where life would take her, Rutherford said she was “along for the ride.”

When her high school friend tried out for the track and cross-country team at Benedict College, then-coach Frank Hyland, asked Rutherford to try out for the team. He liked her athletic ability and asked her to join the team and she received a full scholarship.

She said she has long been fascinated by the workings of the human body, which is key to detailed work she now does as coroner in determining cause of death in routine and celebrated cases.

“The human body is such an amazing machine, the organs are all stuffed, the brain does all these amazing things,” she said.

Rutherford was working as a nurse practitioner when she decided in 2020 to run against Watts, who had held the job for 20 years. She was backed by her ex-husband, Rep. Todd Rutherford, D-Richland, from whom she was divorced in 2017. The couple has two children.

At a February 2021 news conference Todd Rutherford argued that his former wife was more qualified to be coroner because of her extensive list of degrees and background in the medical field.

Terri Abney, deputy coroner and administrator, started volunteering at the coroner’s office because of Rutherford.

Abney worked at the coroners office for three months, unpaid, because she believed in Rutherford.

“I do not know how she does it. What an amazing female role model for young girls and women,” she said.

Rutherford said she did not have role models growing up and did not see anyone that looked like her doing positive things.

Growing up in a poverty-stricken area, “you don’t see black excellence personified,” she said.

So she said she became her own role model; she knew she wanted to be more than how people perceived her.

“I did not want to be a teen mom or on drugs; I wanted to do something with my life,” she said.

Rutherford said she took advantage of the opportunities given to her and believes she would not be sitting where she is today if she did not work hard for what she has.

“The reality is, I did not know that I would be a full-time college graduate, a coroner and making history,” she said. 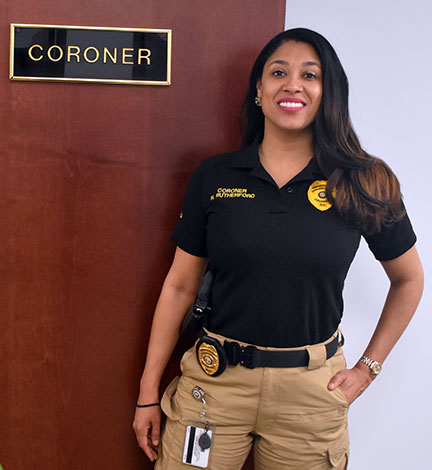 Rutherford normally dresses in a black-and-brown uniform but has a wardrobe in her office so she can change when meeting families. 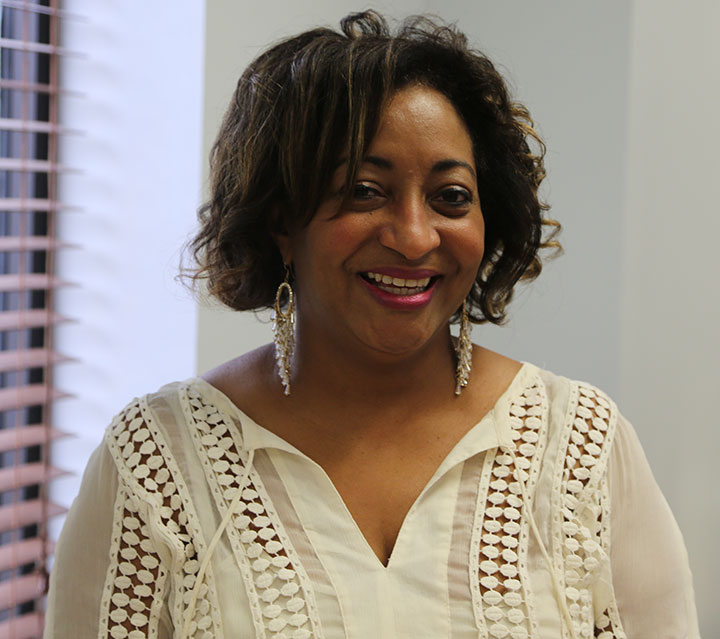 Terri Abney, a deputy coroner and an administrator, said as a Richland County resident she never thought she would see a Black woman elected coroner. 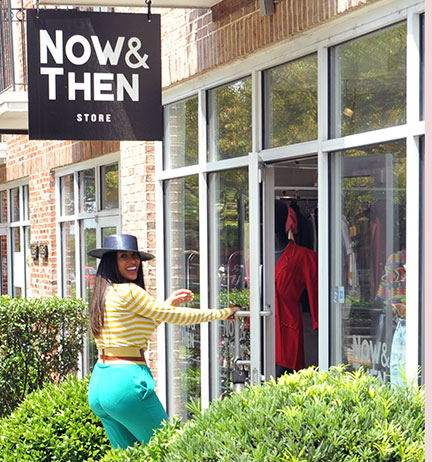 Rutherford opens the door at her Lady Street store. “Being able to dress up and defy what a coroner should look like, is amazing. I feel like this position allows me to be me.” Photo courtesy of Naida Rutherford. 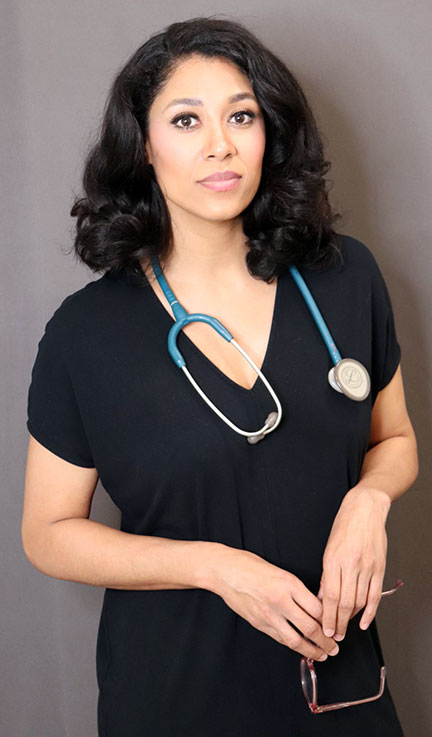 Before becoming Richland County coroner in 2020, Rutherford was a nurse practitioner in the emergency department at Lexington Medical Center. Photo provided by Naida Rutherford.