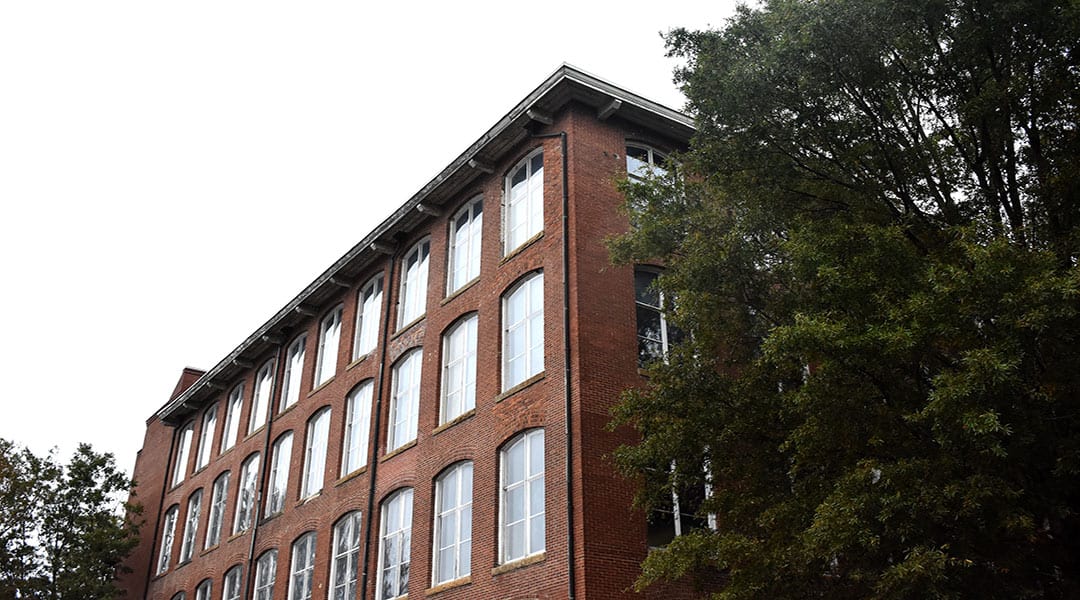 The fourth floor of the S.C. State Museum in Columbia is said to be haunted by the ghost of a young boy killed in a mill accident and a woman known as the Lady in Black. Visitors, security guards and museum workers have shared stories about their haunting experiences with the ghosts.

The South Carolina State Museum that welcomes visitors through its doors each day has an unsettling ghostly history that haunts its halls today.

An ethereal figure dressed in overalls and a black-and-white checkered shirt is said to wander near the place where tragedy struck in 1895 when the historic building was occupied by Columbia Mills Co. The mill that opened in the late 1800s was the first textile mill in the world powered only by electricity.

As the story goes, William Wallace was a 14-year-old boy who worked as a sweeper at the mill and was the son of one of the mill’s foremen. Wallace and another boy were peering into the elevator shaft, examining the elevator below them. Elevators at the time were balanced by a huge weight, and as the elevator moved up, the weight moved down.

As the boys were looking down at the elevator, the 1,000 pound weight from above came crashing down. While the other boy jumped away in time, Wallace was struck in the neck by the massive weight.

“[The] boy was guillotined as thoroughly as if he had been executed in France, saved that the knife was not sharp and did not sever the neck, breaking it instead,” according to a newspaper article published at the time.

Wallace was not decapitated, but his neck was fatally broken. After the weight was released from his neck, the newspaper article described the moments before his death.

“His pulse still beat faintly, but he was soon cold in death.”

He was pronounced dead at the scene, near the same elevator shaft that to this day carries visitors up and down.

Some say when the elevator doors creep open on the fourth floor, the figure of the young boy can be spotted in the shadows.

Pam Borawski, volunteer coordinator at the museum who also leads ghost tours, has encountered the ghost several times. He is known as “Bubba the Ghost,” but Borawski doesn’t know where the nickname came from.

Her first experience with Bubba was when she began giving ghost tours. As she was writing the scripts and choosing the stories to tell, she decided not to include Bubba’s story. As she was sitting alone in an office, she felt a knock on her desk but nothing was there.

“I felt like it was Bubba saying ‘Hey what about me?’” Borawski said.

A less popular ghost that is said to haunt the museum is known as the Lady in Black. Her origins are unknown, but Borawski thinks she is fairly new because there are no stories about her before the museum opened in 1988.

The first story of the Lady in Black came when a visitor at the museum noticed a mannequin dressed in all black sitting in a hearse on display at the museum. The visitor noticed a thick layer of dust on the mannequin and told a family member who worked at the museum that it needed to be dusted.

However, the museum worker told her there has never been a mannequin sitting in the hearse.

Borawski said she doesn’t hear as many stories of encounters with the Lady in Black, but one time when she was giving a ghost tour, several visitors came up to her afterwards and said the lights began swaying back and forth when she began talking about the Lady in Black.

Whether the stories are simply folktales or there are spirits wandering throughout the museum, Borawski said she believes anyone can experience a ghost.

“I think some people are more open it to others,” she said. “As you get older culture and society tells you, “Oh that’s just fake,” so you close off that part of your brain to it.” 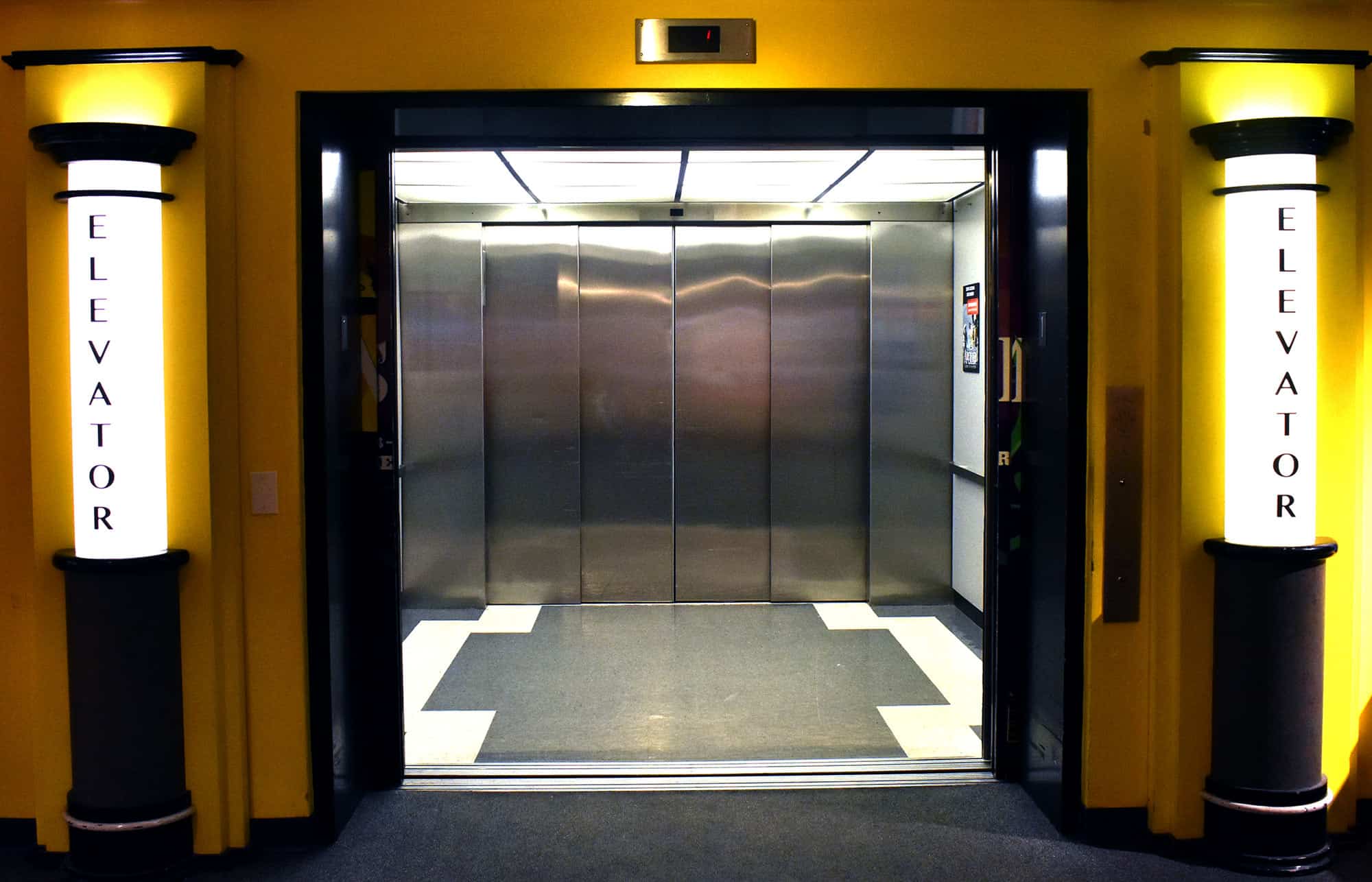 The elevator is where the haunted tale of “Bubba the Ghost” begins. While the modern elevator barely resembles the old one that was used to haul cotton, many warn against riding the elevator alone. 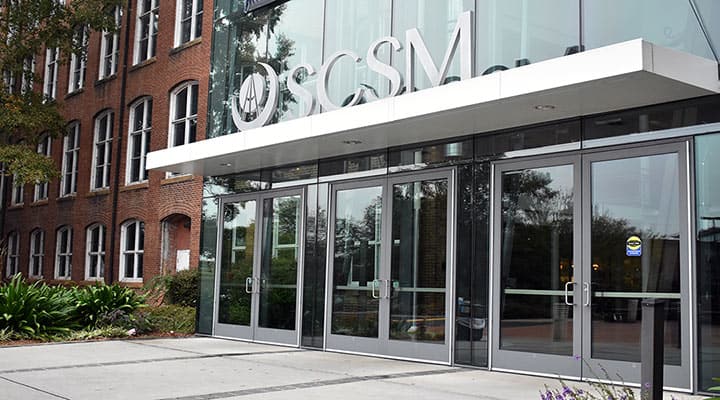 The brick exterior and structure of the building are not the only aspects that have been kept intact from the building’s former days as a cotton mill that opened in the late 1890s. Some say ghosts from the past still linger. 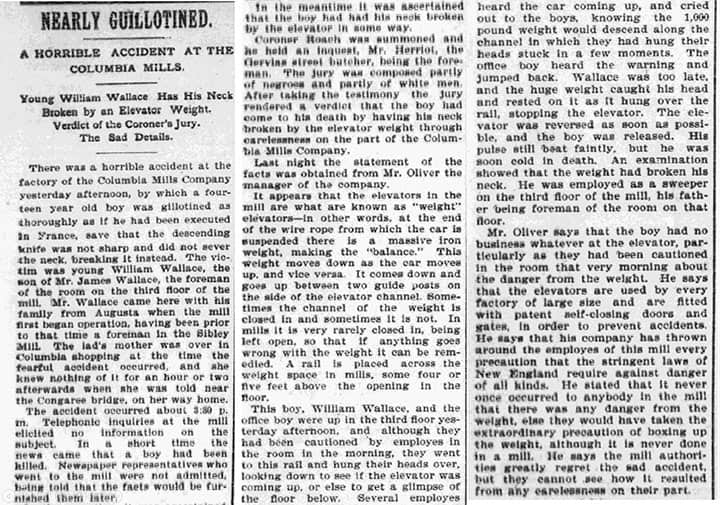 The newspaper article from 1895 details the death that occurred at the Columbia Mills. Courtesy of Jared Glover.