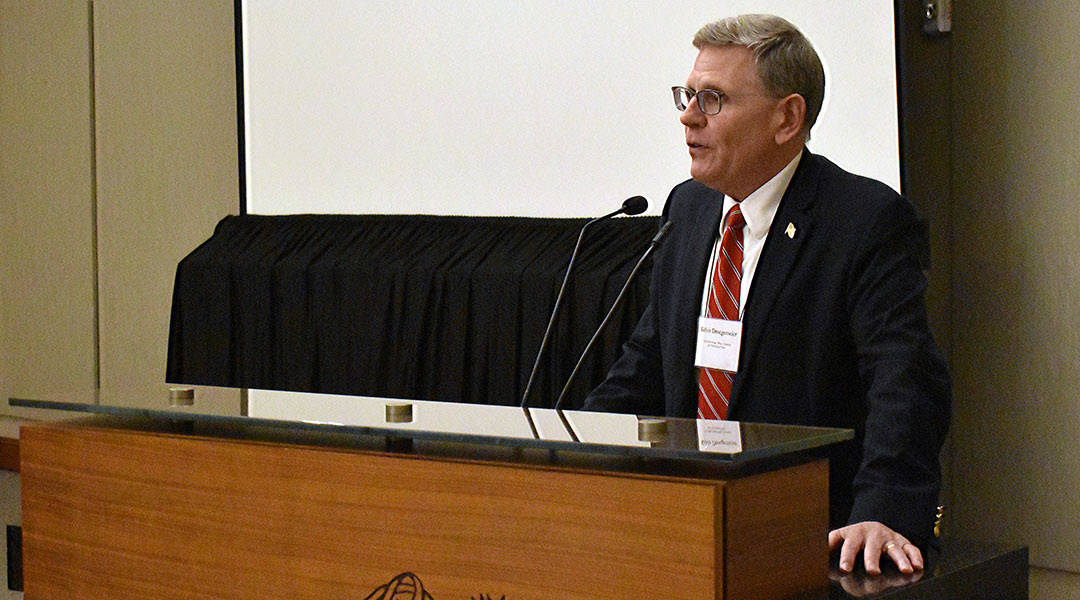 White House science director Kelvin Droegemeier talks to researchers from around the state Monday, Oct. 28 at the Pastides Alumni Center.

White House science director Kelvin Droegemeier said he wakes up every day and asks how America can lead the world in science and technology.

“I didn’t come to the White House to sit on my hands,” Droegemeier said. “I came to make change.”

Droegemeier, President Donald Trump’s science adviser, came to the University of South Carolina Monday to talk about research security with academicians attending the Established Program to Stimulate Competitive Research (EPSCoR) conference.  Of particular concern is shared research with non-democratic countries that may not share American values.

The conference hosted by the UofSC Office of Research and the South Carolina EPSCoR office and included researchers from universities around the state, including Winthrop University, Clemson University and Furman University.

In mid-September, Droegemeier wrote a “Letter to the United States Research Community,” where he explained his research security concerns.

“Over the past several years, some nations have exhibited increasingly sophisticated efforts to exploit, influence, and undermine our research activities and environments,” the letter reads. It also says some of these efforts have come through “foreign government-sponsored talent recruitment programs.”

Marco Valtorta, a professor in UofSC’s computer science and engineering department, said it’s important to distinguish an individual international researcher from his or her government’s intentions.

“There’s also a problem for graduate students and even young faculty working in our university who do not go to conferences abroad because they are afraid they may not be coming back,” Valtorta said.

Christine Sixta-Rinehart, political science professor at University of South Carolina Union, focuses on remotely piloted aircraft targeted killing in her research. She said she has had issues getting to American bases overseas through the Department of Defense for more than a year, and suggested a system to better relations between researchers and government agencies.

Droegemeier said he’s not here to fix every solution, but that he’d like to understand the situation better to remove research barriers and asked Sixta-Rinehart to email him with more information about the issue. He also shared his email on the screen for anyone to reach out and said he wanted his visit to serve as an open discussion.

Droegemeier said the Office of Science and Technology Policy is trying to figure out how to stay geographically diverse in research, yet maintain national security in the United States.

One way they’re doing this is by paying more attention to disclosures of company ownership, other sources of income and affiliations with other international institutions, according to Droegemeier. He said when people break the rules, it’s inconsistent with United States research ethics.

“You simply can’t be trusted. And you might as well be falsifying results that could result in a cancer drug that’ll kill somebody.“

Droegemeier said it doesn’t matter where your from, it just matters that researchers follow the rules and follow proper procedures.

The immediate next step, according to Droegemeier, is a Nov. 5 summit where research leaders will find solutions for the problems discussed at the universities he Droegemeier visited. He said some things might result in new university policy while some might be taken to Congress. 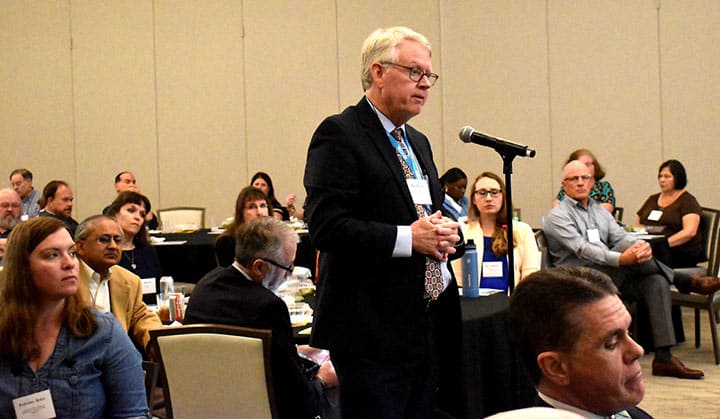 Professor Michael Matthews of the computer science and engineering department asks the White House science director a question during the discussion period.

Faculty researchers from around the state wait for the United States president’s science adviser to take the podium at the Pastides Alumni Center Monday.